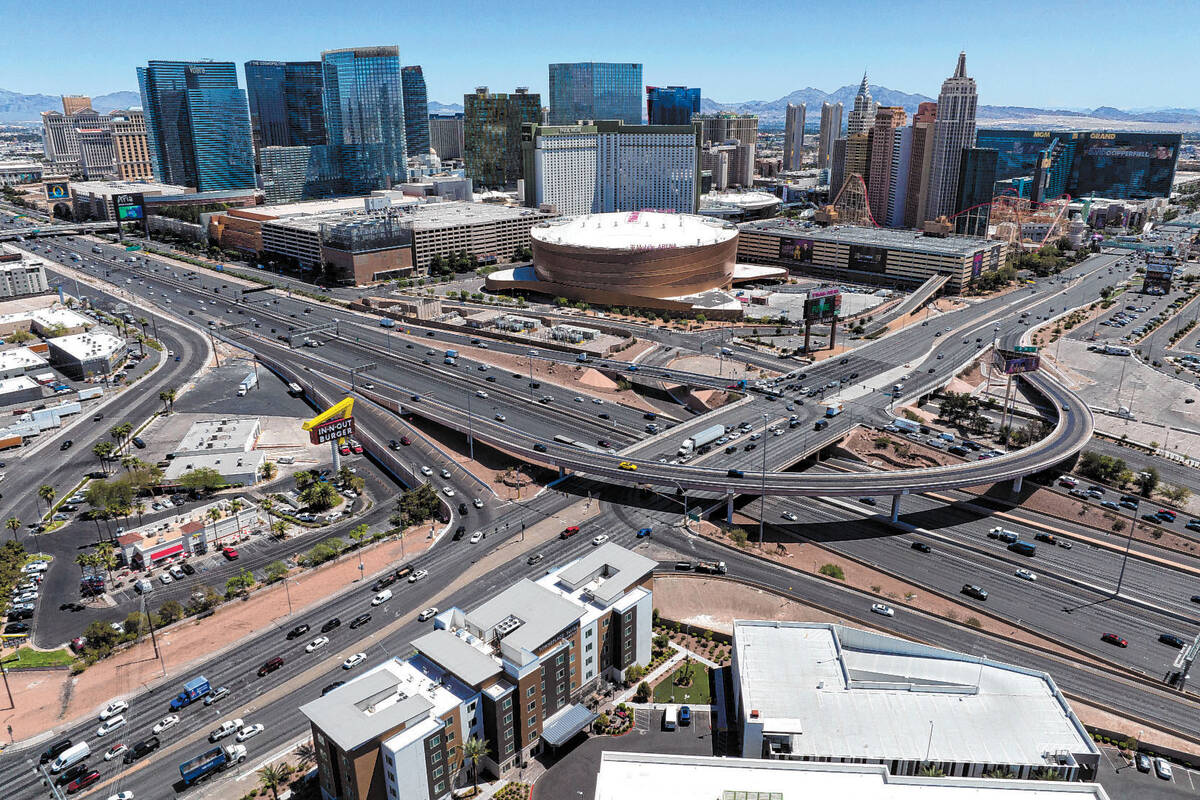 An aerial view of the I-15/Tropicana Interchange on Tuesday, May 31, 2022, in Las Vegas. Crews on Tuesday kick off the massive, $305 million Tropicana-Interstate 15 interchange project near the Las Vegas Strip. (Bizuayehu Tesfaye/Las Vegas Review-Journal) @btesfaye

Tuesday will mark the beginning of “Dropicana,” or the start of the demolition of the Tropicana Avenue bridge tied to the $305 million Interstate 15-Tropicana Interchange project.

Then starting Sunday and running through Jan. 30, Tropicana will close to traffic in both directions between Dean Martin Drive and the New York-New York.

The last portion of work related to this round runs between 10 p.m. Jan. 27 through 5 a.m. Jan. 30, and will see I-15 completely shut to traffic in both directions between Russell and Flamingo roads for an entire weekend.

A pair of Regional Transportation Commission of Southern Nevada bus routes will be affected by the project. Starting Tuesday Route 201 (Tropicana) and the Centennial Express (CX) will be detoured, according to the RTC.

The project will increase capacity to the area that serves as the gateway to Allegiant Stadium, T-Mobile Arena and the south Strip.

■ The demolition and reconstruction of the Tropicana bridge over I-15 and the flyover ramp from I-15 southbound to Tropicana eastbound. This is needed to raise and widen Tropicana over I-15, to increase capacity and safety.

■ Expanding left turn lanes from Tropicana to I-15 from two to three lanes. Constructing a new HOV half-interchange on the south side of the Harmon bridge. Realigning Dean Martin under Tropicana removing the traffic light at Tropicana for increased traffic flow.

■ Making the exit to Frank Sinatra Drive to two lanes and adding new dynamic messaging boards on I-15 between Warm Springs Road and Tropicana.

■ A pedestrian walkway will be added between Tropicana and Arena Drive, leading to and from T-Mobile Arena.

Despite the catchy name and hashtag used by NDOT, it’s all fun and game until you get caught up in the traffic mess the pending closures will cause.

Here are a few detours motorists can take to help avoid some of the headaches associated with the massive road project.

While the pair of I-15 southbound to Tropicana offramps are closed, NDOT urges motorists to exit the freeway at Flamingo to the north or Russell to the south. Locals should also use the 215 Beltway to commute in from the valley’s west side.

Drivers on northbound I-15 will have to exit at Russell, go west to Decatur, north to Flamingo and back onto the freeway. Drivers on I-15 southbound will do the opposite: exit at Flamingo, go west to Decatur, south to Russel and back to I-15. Other north-south alternates are the Airport Connector as well as Valley View,Jones, and Rainbow boulevards.

“We are really urging drivers to avoid I-15 during the weekend of the closure if possible,” said Justin Hopkins, NDOT spokesman. “Unless you work on the Strip or are visiting one of fabulous resorts, it’s best to go around the closures on the 215 Beltway or take U.S. Highway 95 down the east side.”

This story has been updated to correct dates for the eight-day Tropicana Avenue closure.