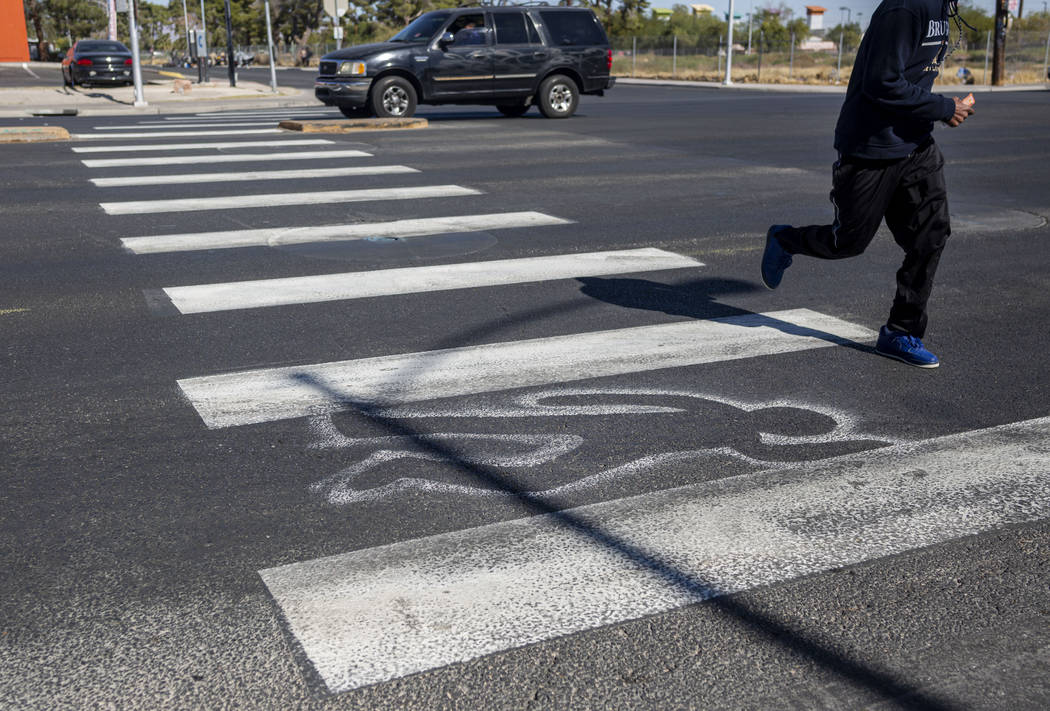 Walking around the Silver State is becoming increasingly more dangerous as Nevada finds itself among the most deadly states for pedestrians.

Nevada ranks as the fifth most dangerous state for pedestrians with 3.07 pedestrian fatalities per 100,000 residents between 2013 and 2017, according to data from the Fatality Analysis Reporting System from the National Highway Traffic Safety Administration. That was an increase of 0.72 deaths per 100,000 residents from 2013 to 2017 , one of the biggest jumps in the nation.

The good news is that the pedestrian death rate has been dropping since 2017.

Last year there were 79 pedestrian deaths in Nevada, a drop of 19 deaths from 2017’s 98 fatalities. This year is also trending in a positive direction, as there have been 50 pedestrian deaths through September, six fewer than at the same point last year.

State public safety officials have been working to educate the public and hosting various events over the past few years aimed at increasing safety for pedestrians and creating better awareness among drivers who commute around them.

Continuing those efforts is an important part of keeping the pedestrian death toll on a declining trend, according to Andrew Bennett, Department of Public Safety spokesman.

With a 10 percent dip year-over-year through September, the office of traffic safety will continue its crusade to curb pedestrian deaths, as it has several pedestrian safety enforcement events planned over the next several months in conjunction with local law enforcement officials.

One pedestrian safety-focused initiative, the Dusk 2 Dawn campaign, will kick off this week, as pedestrian fatalities tend to increase this time of year when the end of daylight saving time brings sunset an hour earlier.

Various agencies are teaming up on the program and will distribute different slogans to media including “Your life counts,” and “Alert Today, Alive Tomorrow” and are spray painting body outlines at crosswalks as part of the campaign.

Additionally, a map of Las Vegas with dots indicating where pedestrians were killed will be online, reminding people that each dot represents a person who lost their life on the road.

Do your part and be aware if you’re behind the wheel, being conscious of your surroundings and giving pedestrians the right of way. Here’s what motorists and pedestrians can do to reduce fatalities.

— Exercise due care to avoid a collision with a pedestrian at all times.

— Yield to pedestrians in crosswalks.

— Yield at all times to a blind person using a white cane or service animal.

— Stop or slow down before passing another vehicle stopped in a travel lane until determining whether that vehicle has stopped for a pedestrian.

— In the presence of a school crossing guard, wait for all persons including the guard to completely clear the road before proceeding.

— Stay alert, and limit the time spent walking with cellphones or other devices out, always paying attention to vehicle traffic and obeying traffic lights and signage.

— Use the sidewalk and the nearest crosswalk, pedestrian bridge or tunnel when possible.

— Walk on the left side of the street facing traffic if no sidewalk is available.

— Don’t suddenly walk into the path of a vehicle so that it is impossible for the vehicle to yield.

Everyone working together can go a long way to further reducing pedestrian deaths.