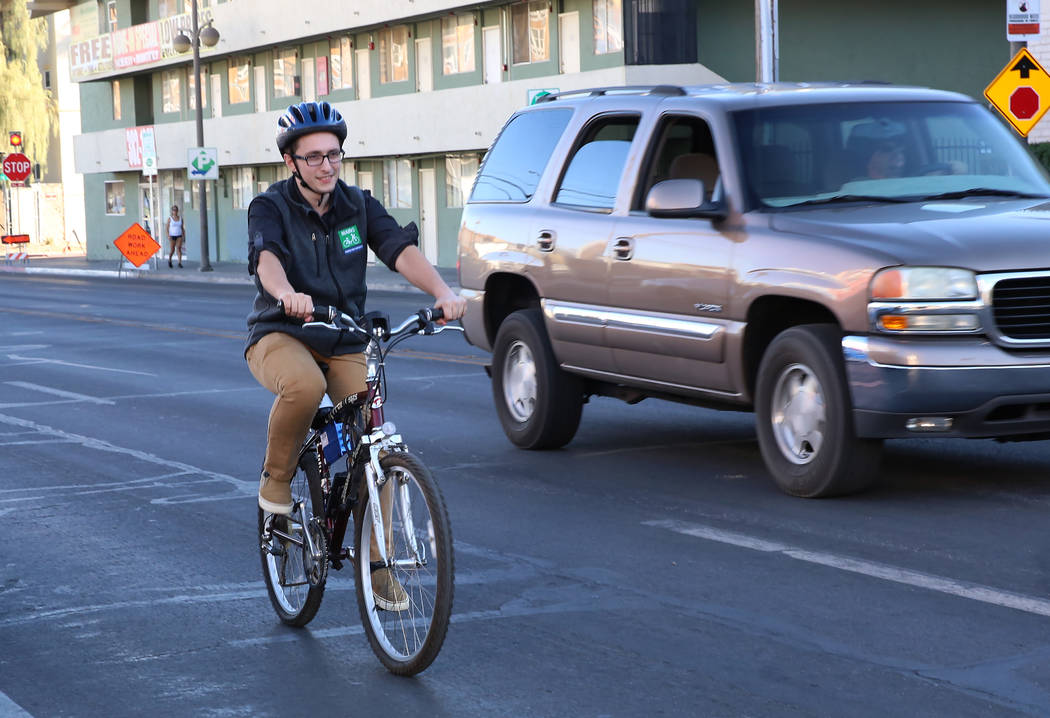 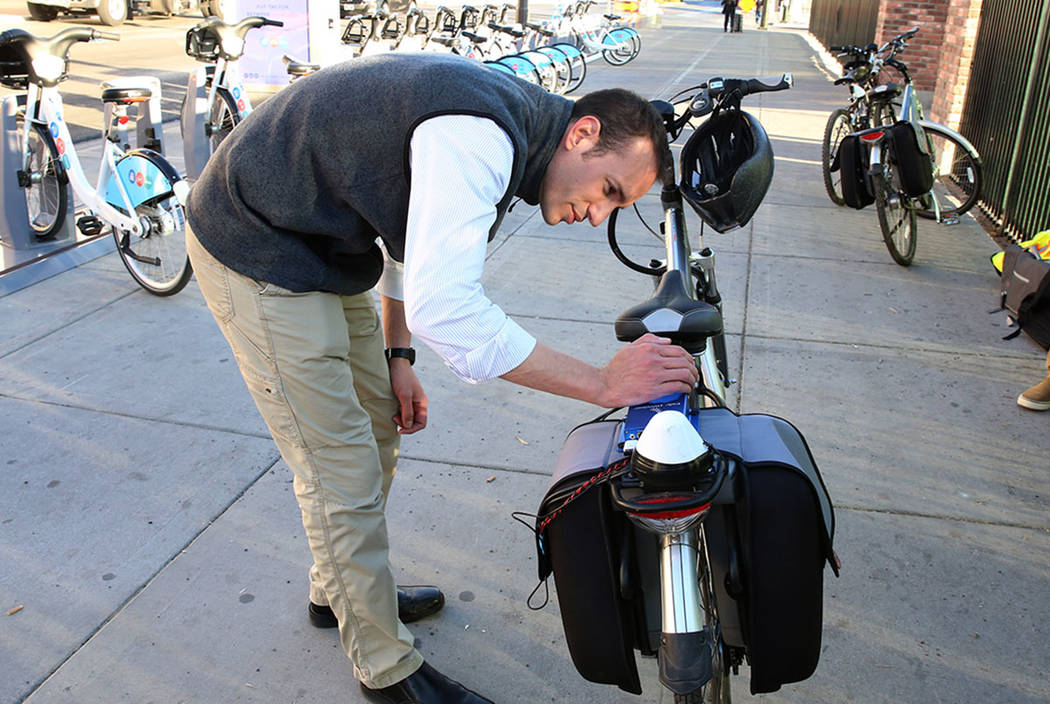 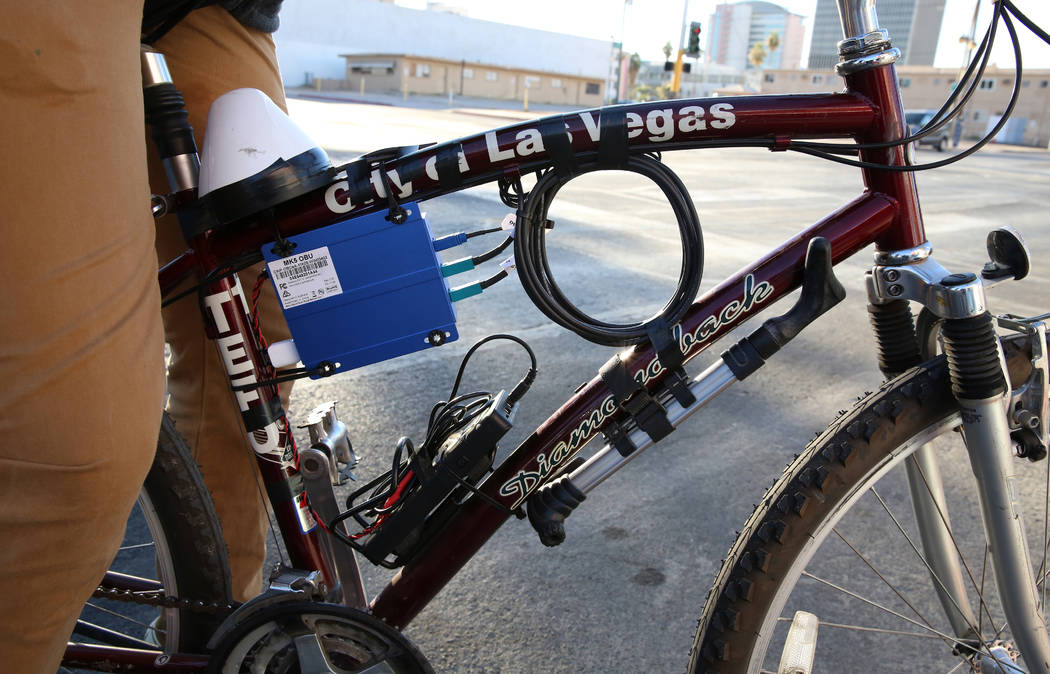 A Smart Halo box and a battery are attached to a prototype bicycle as software developers from Charles River Analytics demonstrate bicycling safety technology at the corner of Seventh Street and Carson Street on Wednesday, Dec. 13, 2017, in Las Vegas. Tech developers were in downtown Las Vegas testing a system that allows bicyclists to communicate with traffic signals. Bizuayehu Tesfaye Las Vegas Review-Journal @bizutesfaye 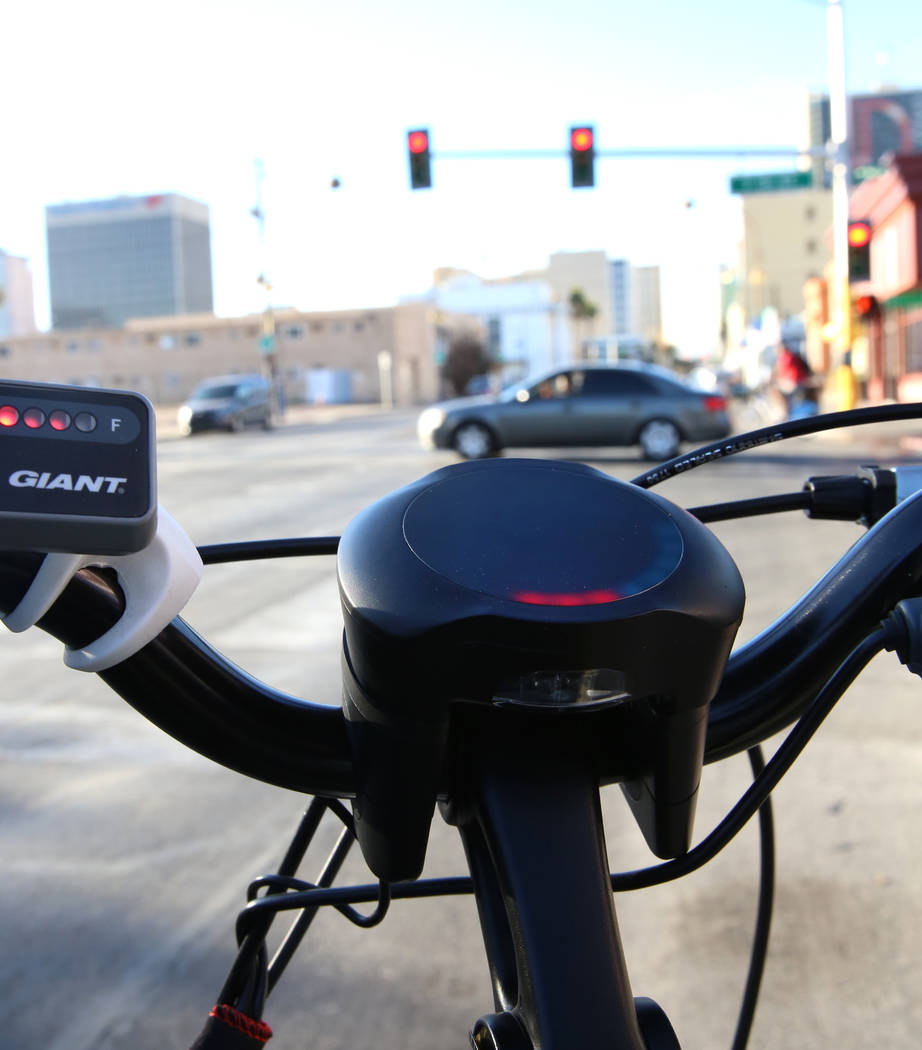 There’s a big push by car manufacturers to equip the newest vehicles with technology capable of “talking” to traffic lights in order to predict a red light or a potential collision.

But what if bicycles had the same ability?

A team of developers was in downtown Las Vegas for three days last week testing a system that would allow cyclists to communicate with signals and city-owned vehicles. The goal, they say, is to alert bike riders of road hazards and reduce crashes with vehicles.

“We’re not trying to control bicyclists,” Jenkins said. “We’re trying to give them the information they need to make safer riding decisions.”

Charles River Analytics is in the middle of a two-year contract to develop its MAIN-ST technology, funded by a $750,000 grant from the U.S. Department of Transportation.

In Las Vegas, Jenkins and his team brought along a portable radio-based system that was strapped onto a pair of bicycles.

The equipment allowed them to transmit signals and communicate with receivers that were recently installed on several traffic signals in the Fremont East neighborhood, which was designated last year as part of the city’s “innovation district.”

A hazard-alert light system known as a “smart halo” was attached to the handlebars, flashing a red light to warn of an upcoming stoplight.

The Road Warrior took a spin on one of those bicycles around the Fremont East neighborhood and found that the “smart halo” triggered only half the time when approaching a red light, even though the project’s computer system showed that the bicycle’s radio transmitter did, indeed, communicate with every traffic signal I encountered during the ride.

It’s a bothersome bug that Jenkins is still fixing.

Another major challenge, Jenkins said, is to make the equipment affordable for casual bicyclists. Right now, the radio-based transmitters could cost $200 to $6,000, depending on how complex you wanted to get.

“There’s a lot of focus around the connected car, but our most vulnerable road users such as bikes also can benefit from this technology,” said Joanna Wadsworth, a program manager for the Las Vegas Public Works Department. “Ultimately, it will increase the safety and increase the awareness of bicyclists on our roadways.”

Seven bicyclist fatalities had been reported this year in Clark County as of Friday, up from four deaths at this time in 2016, said Andrew Bennett, a spokesman for the state Office of Traffic Safety.

Although Bennett said he was encouraged by the technology tested last week in downtown Las Vegas, he noted that bicyclists and drivers “must continue to focus on the issues in play right now.”

“As with all vulnerable road users, traffic safety is a two-way street,” Bennett said. “We remind both cyclists and motorists to follow all traffic laws and to look out for each other.”

Geoffrey from North Las Vegas noticed that drivers on northbound Pecos Road are given a long green light when turning left onto westbound Craig Road during the morning and midday. However, that changes around 9 p.m. weekdays, when “maybe four or five cars manage to get the green light” at this busy intersection near Interstate 15.

“This makes some drivers desperate and run a red light because they do not want to be stuck for another cycle,” Geoffrey wrote in an email to the Road Warrior.

Drivers are encountering a bumpy ride on the southern end of the 215 Beltway. Jack noticed some small potholes that caused his car to jolt along both directions of the Beltway between Windmill Lane and Sunset Road. Neil encountered similar problems near the Eastern Avenue exit.

Earlier this month, crews patched potholes that were discovered along the westbound Beltway between Interstate 15 and Sunset Road, Clark County spokesman Dan Kulin said. Additional potholes that were found in the eastbound lanes and near Eastern Avenue will be patched up soon, Kulin said.