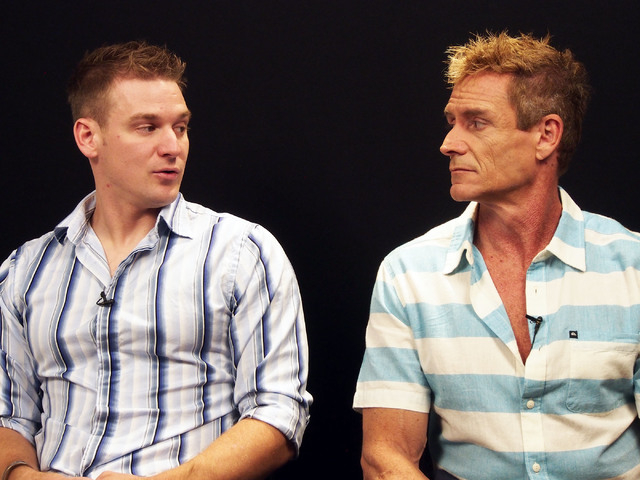 Nevada National Guard soldier Adam Fenner and Lance Taubold will read an excerpt from their novel “On Two Fronts” and host a discussion with guests during a free public event at 1 p.m. Saturday at The Center, 401 S. Maryland Parkway.

They will also show photos and videos from their experiences and sign books.

Released in September, “On Two Fronts” is a dual-perspective novel that tells the story of Fenner, a straight Army National Guard sergeant, and Taubold, a gay Las Vegas entertainer, when they dealt with the emotional stress of military deployment.

Fenner, a medic, wrote Taubold, an opera singer, about what he was experiencing in Afghanistan in 2009. Taubold wrote back with his thoughts on coping with the deployment.

It was Fenner’s third tour in Afghanistan on top of two to Iraq, combining his service with the Marine Corps and the Nevada Army National Guard.

The two men became friends between one of Fenner’s previous deployments when he worked as a security guard at Paris Las Vegas where Taubold performed.

“Unfortunately, your mind can’t avoid going through the worst possible scenario. ‘Oh my God, he’s going off to war. He might not come home. This might be the last time I ever see him,’” Taubold told the Review-Journal in October, recalling the day Fenner left.

Fenner said his buddies wondered whether he was gay even though he’s not and he would be razzed about it.

Published by 13Thirty Books, the print version of “On Two Fronts” includes a quick response code that can be scanned by a smart phone to view scenes Fenner experienced and were captured in photographs and short videos.