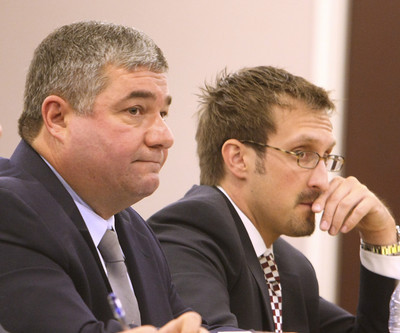 Henderson Constable Earl Mitchell failed to list properly his constable post as a source of income on financial disclosure forms, but he did not do it intentionally and does not deserve punishment, the Nevada Ethics Commission ruled Wednesday.

In response to the question on disclosure forms “list all general sources of income for you,” Mitchell did not include his job as constable. He listed only his job as a Henderson police officer.

He said he did not include his constable pay because it is not his primary source of income, which is what he interpreted the word “general” to mean.

He complained the form is confusing.

“Am I guilty of not listing all incomes, compensation, etcetera? OK, I am,” Mitchell said.

“I am not trying to be evasive.”

William Brown, Mitchell’s attorney, listed other constables in Clark County that made similar mistakes on their financial disclosure statements. A universal misunderstanding exists among constables about what is required, Brown said.

Mitchell told the board that as constable he receives $2,400 in salary and an additional $40,000 in fees. He lists that income alongside his Henderson Police Department earnings on income tax forms, he told the commission.

Neither lawyers nor the board had all of Mitchell’s financial disclosure statements. With seven of the forms in front of them, commissioners unanimously found Mitchell guilty of seven instances of incorrectly filing the disclosures.

Ethics Commission Chairman Jim Kosinski made a motion saying that Mitchell’s violation was not willful and he therefore should not face punishment. The board unanimously approved it.

Mitchell was not the only person to clear his name Wednesday.

Former state Board of Education member Gary Waters also left the meeting happy. Commissioners unanimously ruled that Waters did not need to disclose his relationship as a volunteer and founder of the nonprofit The Center for Health and Learning when presenting information about mental health programs to the state Board of Education.

The complaint was filed by Joe Enge with the nonprofit Ed Watch Nevada.

By law, public officers must refrain from approving, disapproving, voting, abstaining from voting or otherwise acting on any matter that could be affected by a commitment in a private organization.

Because the issue Waters was addressing was not on a Board of Education agenda and because Water’s program was never intended as a solution to a problem being addressed by the board, his disclosure or failure to disclose, was irrelevant, commissioners found.

The Ethics Commission meeting came a day after its authority was questioned in a court ruling.

The Nevada Supreme Court ruled Tuesday that Las Vegas Mayor Oscar Goodman did not violate ethics laws when he hosted a January 2004 party in Washington, D.C., on behalf of his son.

In a 7-0 ruling, the justices upheld a decision last year by District Judge Mark Denton, who threw out a state Ethics Commission determination that the mayor violated a law preventing public officials from using their positions to secure unwarranted privileges.

“At the time of the hearing, the commission found sufficient evidence,” said Adriana Fralick, who is serving as acting director of the panel, which educates public employees and officials on ethic laws and enforces them.

None of the Ethics Commission members would comment directly on the Supreme Court ruling. They said that Wednesday’s hearings had prevented them from having time to read it.

“There has to be some review of the ethics community; everyone is entitled to appeal our decision to the court system,” Fralick said.

“It’s just hard to uphold public trust when you’re doing what your supposed to be doing and have the courts telling you what you did was wrong.”