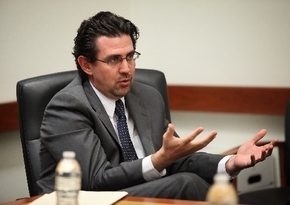 CARSON CITY — An organization opposing passage of a 2 percent business tax in November has released a study that confirms what it has been saying all along: The tax would hurt the bottom lines of Nevada businesses.

The Coalition to Defeat the Margin Tax Initiative released the study by Jeremy Aguero, principal at Applied Analysis, an economic research firm in Las Vegas. The study found the margins tax would take $650 million to $750 million from businesses, give them one of the five highest business taxes in the country and impose what would be the equivalent of a 15 percent business profits tax.

But the report also concluded it is “unclear” whether the tax would disrupt “existing business patterns” or state economic development and diversification efforts.

The Nevada State Education Association wants voters to approve the “Education Initiative” tax, Question 3 on the Nov. 4 ballot, and for the Legislature to earmark the funds for public education.

Karen Griffin, a spokeswoman for the coalition, has been using the figures for weeks. Aguero had refused to release his study, saying it was up to his clients. The coalition released the study Wednesday.

Aguero is a highly regarded economist who has produced studies for corporations, unions and the state.

While the education association also commissioned a study by Aguero on the margins tax, spokesman Nick Di Archangel said Thursday it was not the one the business coalition released.

He said his association has “serious reservations about the preliminary analysis,” noting Aguero said in the business coalition-commissioned study that it “admittedly provides a somewhat skewed view in terms of the hypothetical average taxpayers.”

In his conclusion, however, Aguero wrote that the “proposed Nevada margin tax would make the state of Nevada significantly less competitive from a general business tax standpoint.”

Margins tax opponents have emphasized that the tax only provides an exemption for companies with revenue of $1 million or less. But businesses that earn 1 cent more $1 million would pay the tax. That could cause some small companies to seek to reduce revenues to avoid the tax, Griffin has said previously. Even unprofitable companies could be subject to the tax.

Supporters point out that a company could deduct the current 1.17 percent business payroll tax from its margins tax and noted that reports repeatedly find Nevada among the worst states in education factors, such as state appropriation and the chance of success by students.

As an example of the higher tax burden with the new tax, the coalition said a business with adjusted total revenues of $9.95 million would have a tax liability of $87,237, or 250 percent more than the $34,262 due under the current tax on payrolls.

“This report solidifies our deep-seated concerns about the tax initiative,” Griffin said. “Not only would Question 3 damage Nevada’s fragile economy, kill jobs and unduly burden businesses, but because of its complete lack of accountability, it provides no guarantee that our schoolchildren would see more funding for their classrooms.”

She said many businesses “that sell goods and services in Nevada would pass on their increased costs from the tax to consumers, increasing the costs we pay for food, clothing, health care, electricity, phone bills, and other products and services.”

Unlike a profits tax, the margins tax is figured by taking total revenue, subtracting wages, costs of products or taking a straight 30 percent deduction, and then calculating the tax due.