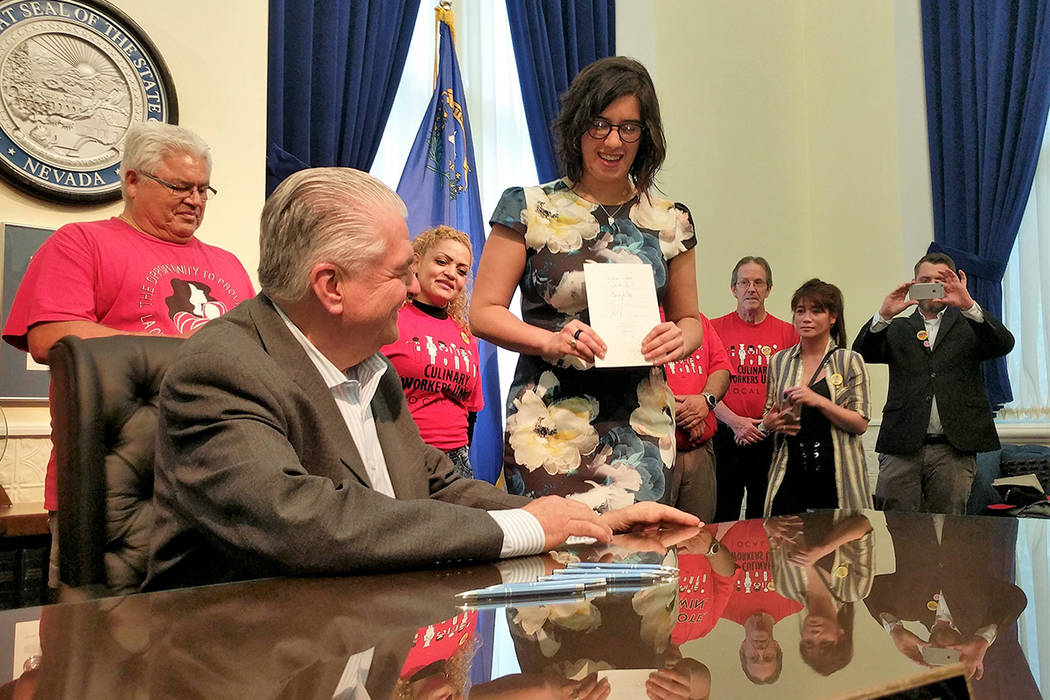 CARSON CITY — Gov. Steve Sisolak on Thursday signed a bill that will add even more transparency to prescription drug prices in Nevada.

Sisolak signed Senate Bill 262, sponsored by Sen. Yvanna Cancela, D-Las Vegas, which will require drug companies to disclose annually information about how they price asthma medications, including manufacturing costs and investments in research.

“This bill takes the first step in answering the question, ‘Why is it so expensive to have asthma?’” Cancela said while speaking to the press minutes before the bill was signed.

“This will not solve the problem for the high cost of asthma medications. But it does shed light and help us come up with solutions by giving us data that does not come from the industry,” Cancela said. That data, she added, could then be used by the state to make informed policy decisions.

The new law builds upon one passed in 2017, also championed by Cancela, that requires similar disclosures for insulin prices that was considered at the time the strictest drug-price disclosure law in the nation.

In Nevada, more than 10 percent of adults and 11 percent of children have asthma — rates that outpace the national average, according to data from the Centers for Disease Control.

And much like chronic conditions, the costs of prescription medications used to treat them have risen significantly in recent years. From 2013 to 2018, the average cost of an inhaler jumped by more than 35 percent, from $280 to $380.

Cancela’s 2017 bill was challenged in court by PhRMA, but the industry group dropped the lawsuit last summer. But during the hearings for SB262 this session, pharmaceutical companies raised similar concerns, hinting at a possible lawsuit over the new law as well.

Speaking to reporters after signing the bill, Sisolak said he hopes that they don’t take that path but rather come to the table to discuss issues around the industry with the governor’s proposed Patient Protection Commission. That 11-member board, which still needs to be approved by the Assembly, would review health care costs in the state, including prescription drug prices; the quality and adequacy of health care and the availability of insurance, and the potential impact of federal policy changes.

“I told them they get a seat at the table, but they need to be a cooperating member of this group and it’s my hope that they’ll do that,” Sisolak said.

Another of Cancela’s bills aimed at addressing drug pricing, Senate Bill 276, received unanimous approval by the Assembly, and now heads to the Senate for a procedural vote before heading to the governor’s desk.

Under that bill, the Legislative Commission would set up an interim study to look at the costs of prescription drugs in Nevada and how things such as rebates, price reductions along the supply chain and other aspects play into the final charge to a patient.

Cancela said she wants to use that study to look at how other states have gone about reducing drug costs in Medicaid, which is one of the few areas over which the state has direct control.