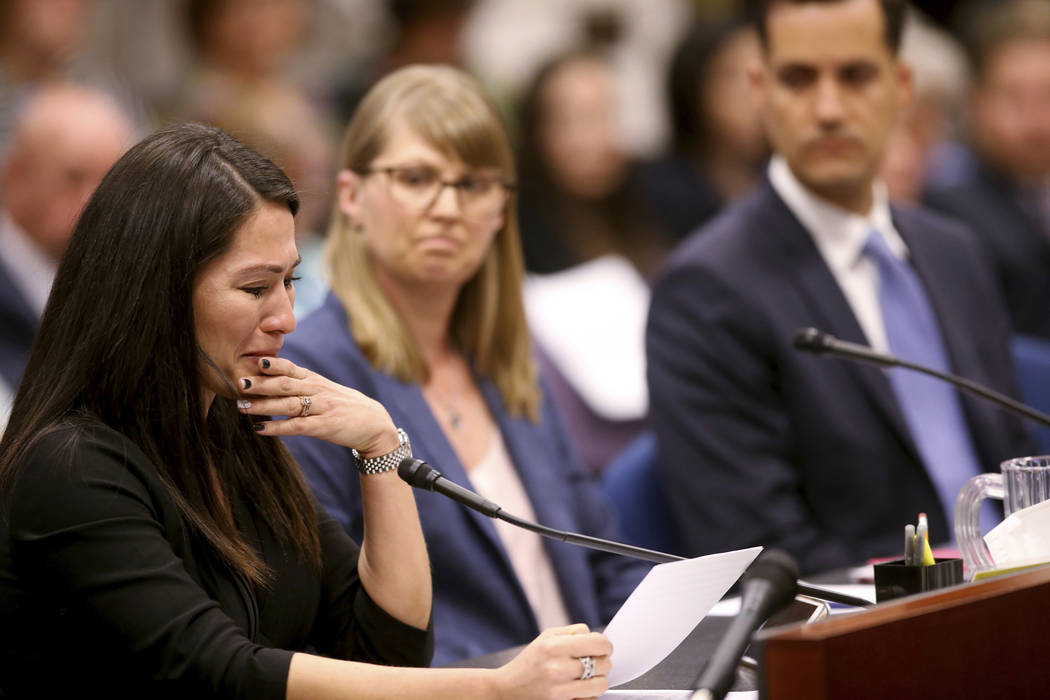 Assemblywoman Sandra Jauregui, D-Las Vegas, testifies to a joint meeting of the Assembly and Senate Judiciary committees in the Legislative Building in Carson City Monday, April 1, 2019, on Assembly Bill 291, which would ban bump stocks and other firearms modifications. (K.M. Cannon/Las Vegas Review-Journal via AP)

Those changes came to Assembly Bill 291, the Democrats’ omnibus gun control bill sponsored by Assemblywoman Sandra Jauregui, D-Las Vegas. The red flag laws would allow authorities to seize firearms from people deemed to be a threat to themselves or others. The amendment also added stricter gun storage laws that would make negligent storage of a firearm a crime, copying language from a bill from Assemblyman Ozzie Fumo, D-Las Vegas, that died earlier this session.

But the revised version removes the most controversial aspect of the original: allowing local governments to pass stricter gun control measures than the state.

The amended bill was approved Wednesday by the Senate Judiciary Committee on a party-line vote. It previously passed the Assembly on a 28-13 vote, with Sparks Democrat Skip Daly joining all 12 Republicans in voting against it.

If approved by the full Senate and signed by Gov. Steve Sisolak, Nevada would join 15 other states who have passed similar red flag laws. Ten of those states have enacted those laws since the 2018 shooting at Marjory Stoneman Douglas High School in Parkland, Florida, that left 17 students and staff members dead.

“We do believe that provisions in AB291 will help fill a gap and allow us to intervene where we can,” said Corey Solferino, a lobbyist for the Washoe County Sheriff’s Office, while testifying in support of the bill during a hearing Wednesday.

“Part of the Washoe County Sheriff’s Office’s mission is to keep firearms out of the hands of prohibited persons and those with mental health illnesses,” Solferino added. “And we do hope that 291, while it may not prevent all tragedies, will help us prevent the ones that we can.”

In its amended version, AB291 keeps the provision to ban bump stocks, add-ons to semi-automatic rifles that allow them to simulate automatic fire. Those devices became a focal point for gun control activists after they were used in the Route 91 Harvest festival concert shooting in Las Vegas in October 2017, where 58 people died and more than 800 were injured by a gunman who was able to fire more than 1,100 rounds in about 10 minutes.

Under the proposed red flag language of AB291, a family member or law enforcement could petition a court for a protection order against a person who they believe is a threat to themselves or to others. If the court signs off, it would prevent that person from being able to buy a gun and would require them to turn their guns into law enforcement.

Andrew Karwoski, deputy director of state policy for Everytown for Gun Safety, the national gun control group that has been helping Jauregui draft the changes, said that the bill has “strong protections which allow the firearms to be returned and only help as long as necessary.”

But gun rights activists argued that those laws could still infringe on a person’s right to due process because it would allow a court to bar a person from owning a gun without being convicted of a crime.

“Where is the individual’s due process rights in this process?” asked Sen. Ira Hansen, R-Sparks.