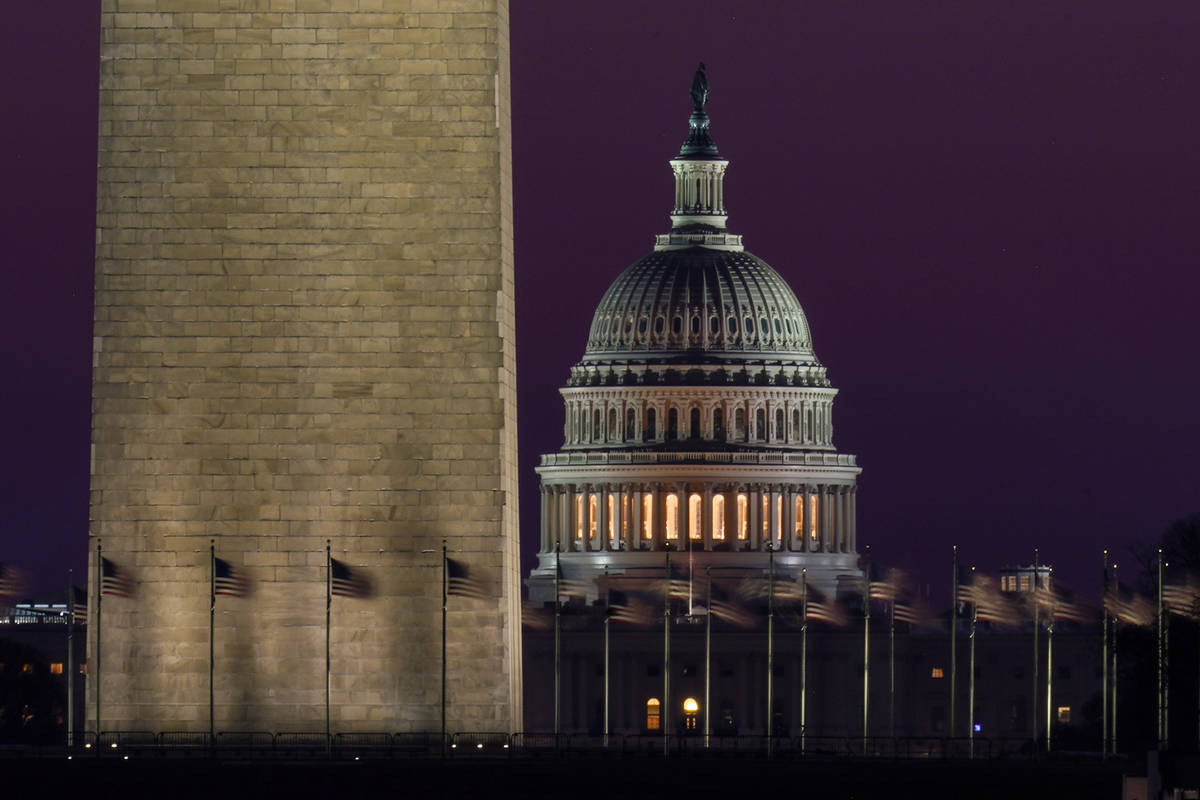 The Capitol is seen beyond the base of the Washington Monument before sunrise in Washington, Wednesday, March 10, 2021. (AP Photo/Carolyn Kaster)

Four men described as leaders of the far-right Proud Boys have been charged in the U.S. Capitol riots, as an indictment ordered unsealed on Friday presents fresh evidence of how federal officials believe group members planned and carried out a coordinated attack to stop Congress from certifying President Joe Biden’s electoral victory.

So far, at least 19 leaders, members or associates of the neo-fascist Proud Boys have been charged in federal court with offenses related to the Jan. 6 riots. The latest indictment suggests the Proud Boys deployed a much larger contingent in Washington, with over 60 users “participating in” an encrypted messaging channel for group members that was created a day before the riots.

The Proud Boys abandoned an earlier channel and created the new “Boots on the Ground” channel after police arrested the group’s top leader, Enrique Tarrio, in Washington. Tarrio was arrested on Jan. 4 and charged with vandalizing a Black Lives Matter banner at a historic Black church during a protest in December. He was ordered to stay out of the District of Columbia.

Tarrio hasn’t been charged in connection with the riots, but the latest indictment refers to him by his title as Proud Boys’ chairman.

Ethan Nordean and Joseph Biggs, two of the four defendants charged in the latest indictment, were arrested several weeks ago on separate but related charges. The new indictment also charges Zachary Rehl and Charles Donohoe.

Nordean, 30, of Auburn, Washington, was a Proud Boys chapter president and member of the group’s national “Elders Council.” Biggs, 37, of Ormond Beach, Florida, is a self-described Proud Boys organizer. Rehl, 35, of Philadelphia, and Donohoe, 33, of North Carolina, serve as presidents of their local Proud Boys chapters, according to the indictment.

No response from lawyers

Proud Boys members, who describe themselves as a politically incorrect men’s club for “Western chauvinists,” have frequently engaged in street fights with antifascist activists at rallies and protests. Vice Media co-founder Gavin McInnes, who founded the Proud Boys in 2016, sued the Southern Poverty Law Center for labeling it as a hate group.

The Proud Boys met at the Washington Monument around 10 a.m. on Jan. 6 and marched to the Capitol before then-President Donald Trump finished addressing thousands of supporters near the White House.

Around two hours later, just before Congress convened a joint session to certify the election results, a group of Proud Boys followed a crowd of people who breached barriers at a pedestrian entrance to the Capitol grounds, the indictment says. Several Proud Boys also entered the Capitol building itself after the mob smashed windows and forced open doors.

At 3:38 p.m., Donohoe announced on the “Boots on the Ground” channel that he and others were “regrouping with a second force” as some rioters began to leave the Capitol, according to the indictment.

‘Not simply a march’

“This was not simply a march. This was an incredible attack on our institutions of government,” Assistant U.S. Attorney Jason McCullough said during a recent hearing for Nordean’s case.

Prosecutors have said the Proud Boys arranged for members to communicate using specific frequencies on Baofeng radios. The Chinese-made devices can be programmed for use on hundreds of frequencies, making them difficult for outsiders to eavesdrop.

After Tarrio’s arrest, Donohoe expressed concern that their encrypted communications could be “compromised” when police searched the group chairman’s phone, according to the new indictment. In a Jan. 4 post on a newly created channel, Donohoe warned members that they could be “looking at Gang charges” and wrote, “Stop everything immediately,” the indictment says.

“This comes from the top,” he added.

A day before the riots, Biggs posted on the “Boots on the Ground” channel that the group had a “plan” for the night before and the day of the riots, according to the indictment.

In Nordean’s case, a federal judge accused prosecutors of backtracking on their claims that he instructed Proud Boys members to split up into smaller groups and directed a “strategic plan” to breach the Capitol.

“That’s a far cry from what I heard at the hearing today,” U.S. District Judge Beryl Howell said on March 3.

Howell concluded that Nordean was extensively involved in “pre-planning” for the events of Jan. 6 and that he and other Proud Boys “were clearly prepared for a violent confrontation” that day. However, she said evidence that Nordean directed other Proud Boys members to break into the building is “weak to say the least” and ordered him freed from jail before trial.

“Wearing tactical gear and armed with a canister of pepper spray gel marketed as 67 times more powerful than hot sauce, Worrell advanced, shielded himself behind a wooden platform and other protestors, and discharged the gel at the line of officers,” prosecutors wrote in a court filing.

Defense attorney John Pierce argued his client wasn’t aiming at officers and was only there in the crowd to exercise his free speech rights.

“He’s a veteran. He loves his country,” Pierce said.