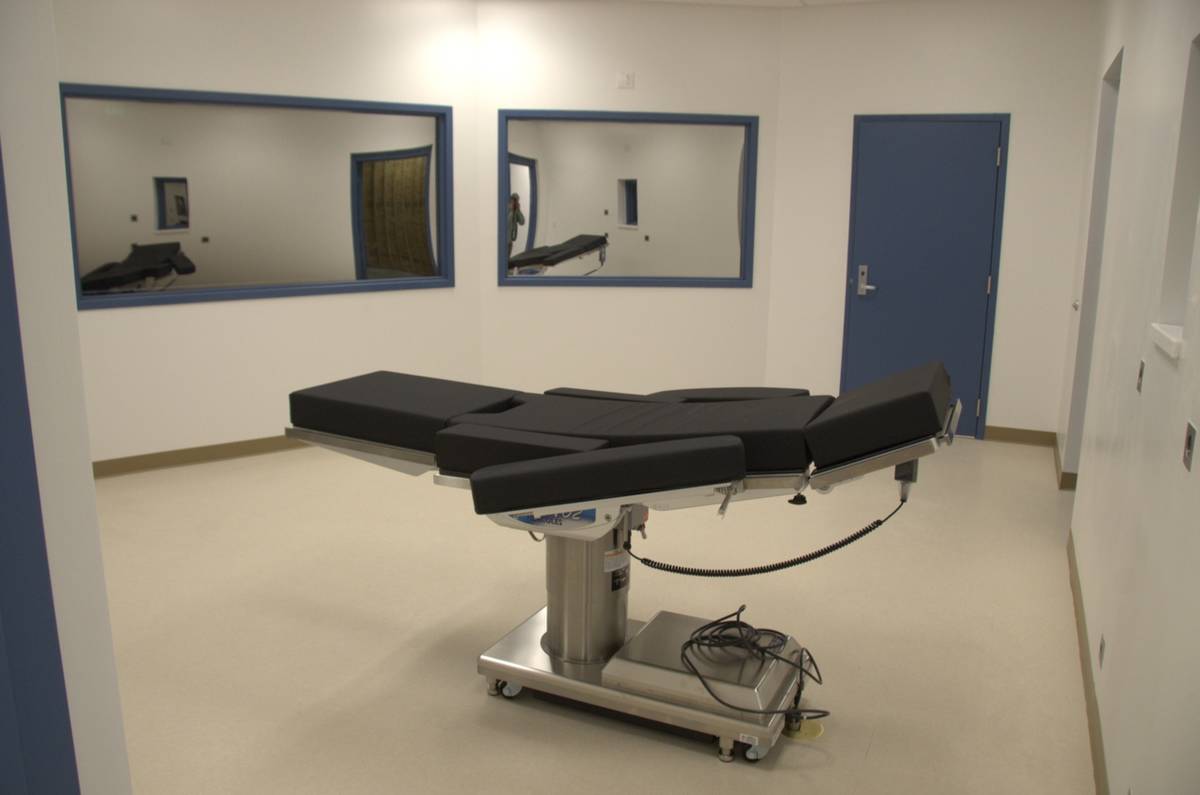 A view of the gurney inside the execution chamber at Ely State Prison in this Nov. 10, 2016, file photo. (Nevada Department of Corrections)

WASHINGTON — The ACLU and other like-minded organizations are pushing President Joe Biden to end the federal death penalty which saw a resurgence under former President Donald Trump, who presided over 13 federal executions during his last seven months in office.

“The execution spree we saw under Donald Trump was unprecedented, unlawful, and unjust,” Cynthia Roseberry of the ACLU Justice Division said.

Biden personally opposes capital punishment, as he made clear during the 2020 campaign, but he has yet to move against the federal practice.

When questioned on whether Biden will move to end capital punishment, White House Press Secretary Jen Psaki has told reporters that she had no information to share about any such plans.

A letter signed by the ACLU, Amnesty International, NAACP’s Legal Defense and Educational Fund and other organizations urged Biden to issue a moratorium on executions and grant clemency to the 49 people on federal death row.

According to the Federal Bureau of Prisons, there currently are no federal executions scheduled.

On a call with reporters, Cassandra Stubbs, director of the Capital Punishment Project at the ACLU called the federal death penalty “racist” and “applied to people who have suffered unspeakable trauma and mental illness.”

Rep. Adriano Espaillat, D-NY, said that the effort would include legislation to abolish the death penalty, which “should be no part of our criminal legal system.” Espaillat’s 2019 bill to end capital punishment died without a single vote cast in the Democratic House.

Michael Rushford of the pro-death penalty Criminal Justice Legal Foundation in Sacramento said he believed it was “too heavy a lift” to expect Congress to vote to overturn the federal death-penalty law.

“I think he can just not enforce” the ultimate sentence, Rushford said.

Unlike Biden, former President Barack Obama never said no to capital punishment. Instead the 44th president said that the punishment was “deeply troubling” but appropriate for the most heinous crimes.

Obama could have exercised his pardon power to commute the sentences of all federal death row inmates. Instead, as he prepared to exit the White House in 2017, Obama commuted the sentences of two death-row inmates, Abelardo Ortiz, who was convicted of a drug trafficking murder in 2000 and Dwight Loving, convicted of two robbery murders in 1989, and reduced their sentence to life without parole.

In a statement, Barr noted that capital punishment has been authorized by federal law and the Justice Department owes it to “victims and their families to carry forward the sentence imposed by our justice system.”

A year later, officials at a federal prison complex in Terre Haute, Indiana, had administered lethal injections to 13 inmates.

Six of the inmates were white, six were black and one was Native American. One inmate, Lisa Montgomery, who was convicted of murdering a pregnant Bobbie Jo Stinnett and cutting the baby from her abdomen some 16 years ago, was female.

In an opinion released before the Jan. 16 execution of Dustin Higgs, who was convicted and sentenced to death for the killing three Maryland women in 1996, Justice Sonia Sotomayor descried “an unprecedented rush of federal executions.”

“To put that in historical context, the Federal Government will have executed more than three times as many people in the last six months than it had in the previous six decades,” Sotomayor wrote.

Rushford objected to the argument that the executions were rushed. “Every case had at least 20 years of appeals,” he said.

5
California coronavirus variant among those spreading in Nevada