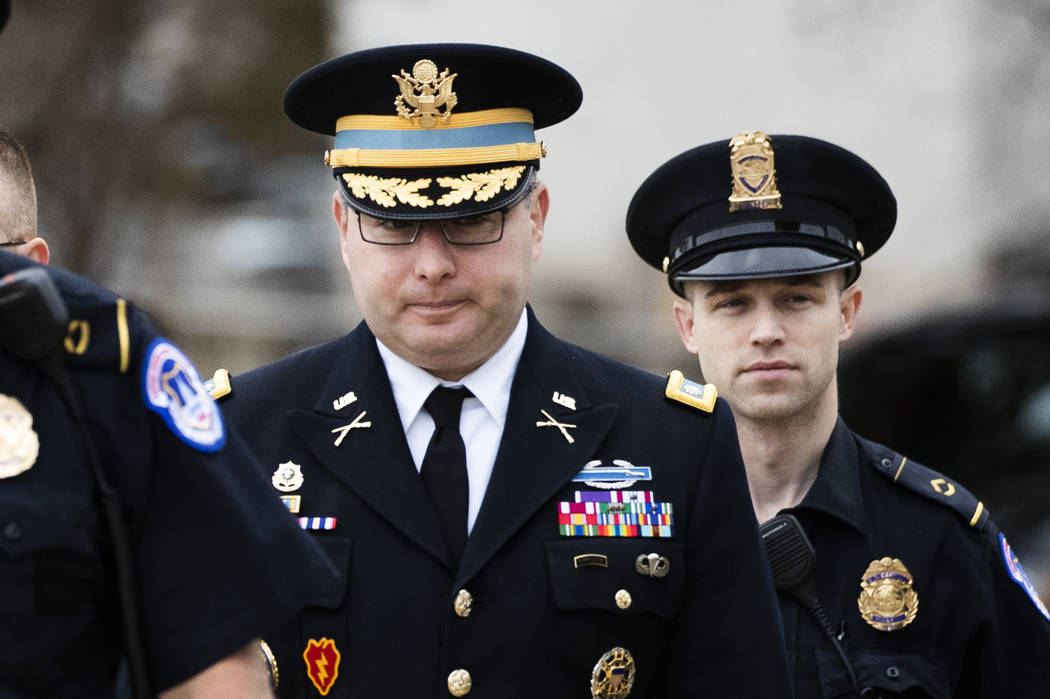 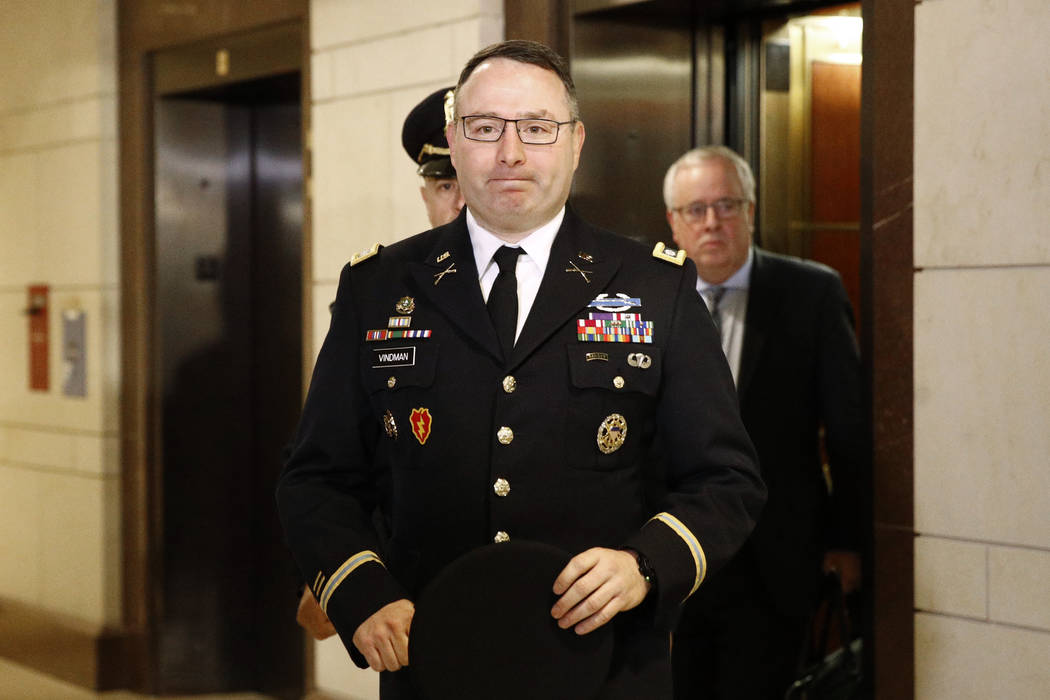 Army Lt. Col.l Alexander Vindman, a military officer at the National Security Council, center, arrives on Capitol Hill in Washington, Tuesday, Oct. 29, 2019, to appear before a House committees as part of the impeachment inquiry into President Donald Trump. (Patrick Semansky/AP) 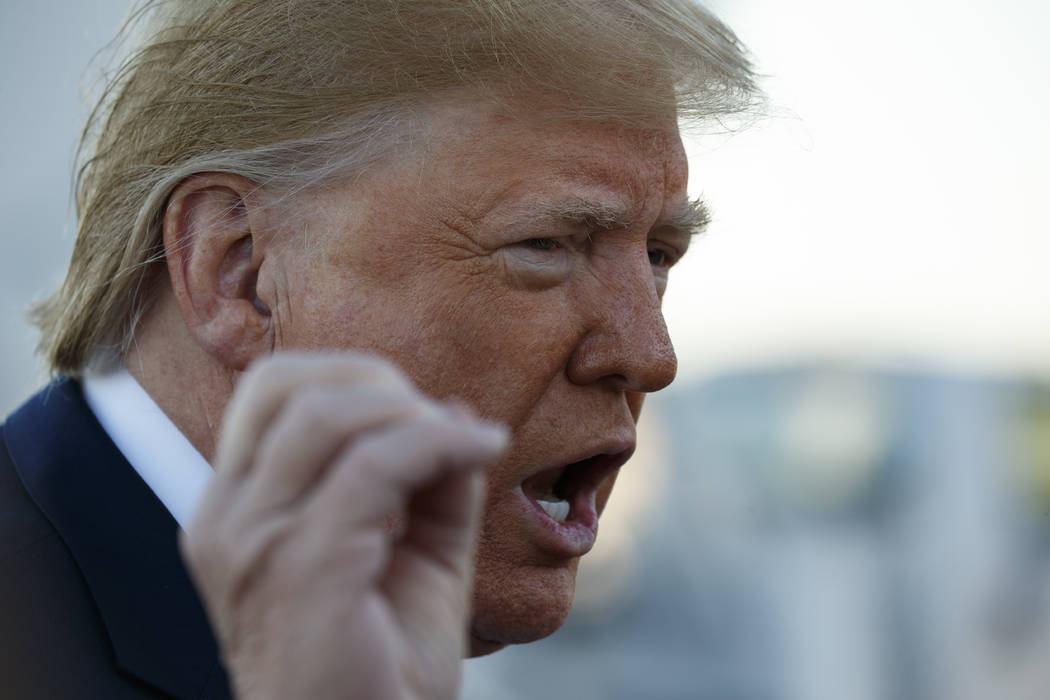 President Donald Trump talks to reporters before boarding Air Force One for a trip to Chicago to attend the International Association of Chiefs of Police Annual Conference and Exposition, Monday, Oct. 28, 2019, in Andrews Air Force Base, Md. (Evan Vucci/AP) 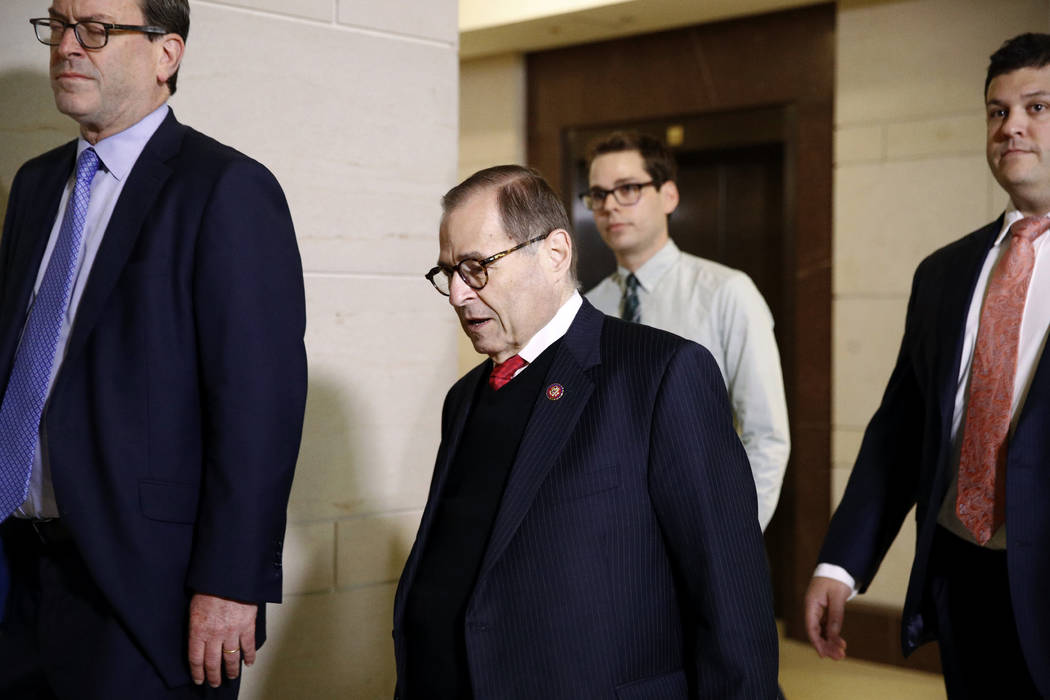 Rep. Jerrold Nadler, D-N.Y., center, walks to a secure area of the Capitol where Army Lt. Col. Alexander Vindman, a military officer at the National Security Council, arrived for a closed door meeting to testify as part of the House impeachment inquiry into President Donald Trump, Tuesday, Oct. 29, 2019, on Capitol Hill in Washington. (Patrick Semansky/AP) 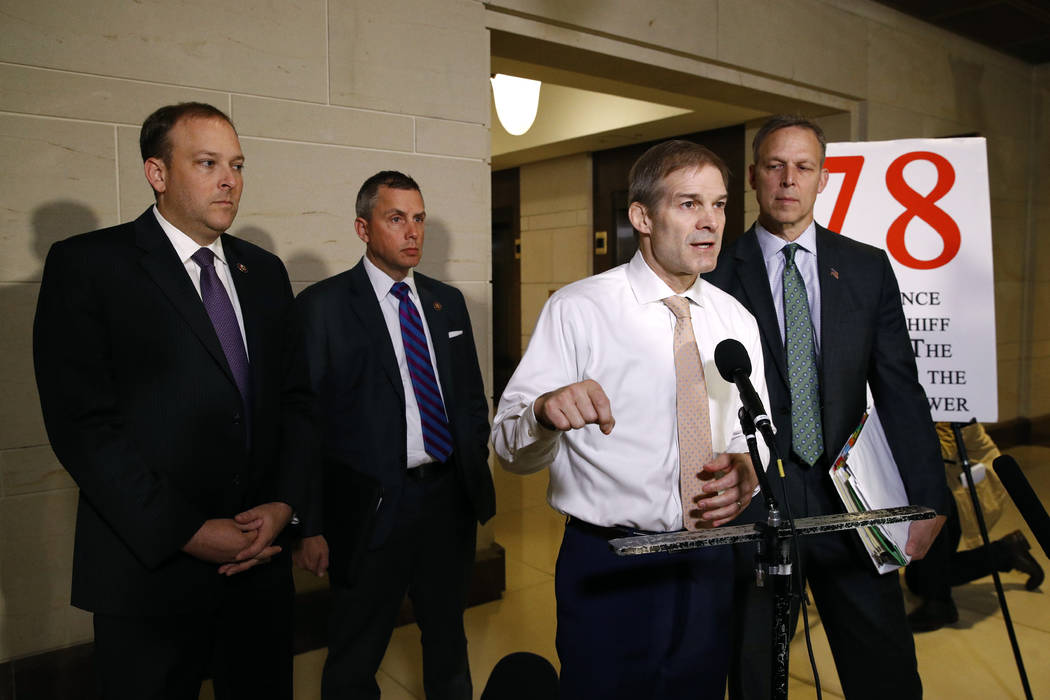 Alexander Vindman, a lieutenant colonel who served in Iraq and later as a diplomat, told House investigators behind closed doors that he listened to Trump’s July 25 call with new Ukrainian President Volodymyr Zelenskiy and reported his concerns to the NSC’s lead counsel, according to his prepared testimony.

His arrival in military blue, with medals, created a striking image as he entered the Capitol and made his way to the secure briefing room.

“I was concerned by the call,” Vindman said, according to his testimony obtained by The Associated Press. “I did not think it was proper to demand that a foreign government investigate a U.S. citizen, and I was worried about the implications for the U.S. government’s support of Ukraine.”

Vindman, a 20-year military officer, was the first official who listened in on the phone call to testify as the impeachment inquiry reaches deeper into the Trump administration and Democrats prepare for the next, public phase of the probe. He was also the first current White House official to appear before the impeachment panels. With the administration directing staff not to appear, he was issued a subpoena to testify.

The inquiry is looking into Trump’s call, in which he asked Zelenskiy for a “favor” — to investigate Democrats — that the Democrats say was a quid pro quo for military aid and could be an impeachable offense.

Trump took to Twitter Tuesday to denounce the probe as a “sham,” adding: “Why are people that I never even heard of testifying about the call. Just READ THE CALL TRANSCRIPT AND THE IMPEACHMENT HOAX IS OVER!”

Some Trump allies, looking for ways to discredit Vindman, questioned the colonel’s loyalties because he was born in the region. But the line of attack was rejected by some Republicans, including Rep. Liz Cheney, who said it was “shameful” to criticize his patriotism.

His appearance came a day after Speaker Nancy Pelosi announced the House will vote on a resolution to affirm the impeachment investigation, set rules for public hearings and outline the potential process for writing articles of impeachment against Trump.

The 8-page resolution released Tuesday calls for open hearings and requires the House intelligence committee to submit a report outlining its findings and recommendations. The Judiciary Committee would review the evidence and potentially report articles of impeachment.

House Rules Committee Chairman James McGovern of Massachusetts said the resolution will “provide a clear path forward” as the House begins a public phase of the impeachment inquiry.

Senate Majority Leader Mitch McConnell said he and other GOP lawmakers will review the House language to see if it passes a “smell test” of fairness to Trump.

The House is expected to vote on the resolution on Thursday.

Vindman said that in spring of this year he became aware of “outside influencers” promoting what he called a “false narrative of Ukraine” that undermined U.S. efforts. Ukraine, in trying to become a vibrant democracy integrated with the West, is a bulwark against overt Russian aggression, he said in his opening statement.

Other officials have testified that Ukraine policy was increasingly being handled by the president’s personal attorney, Rudy Giuliani, and others in the administration outside regular policy-making channels. One diplomat testified it was “highly irregular.”

Vindman testified that he first reported his concerns after an earlier meeting July 10 in which U.S. Ambassador to the European Union Gordon Sondland stressed the importance of having Ukraine investigate the 2016 election as well as Burisma, a company linked to the family of Biden, a 2020 Democratic presidential candidate.

Vindman says he told Sondland that “his statements were inappropriate, that the request to investigate Biden and his son had nothing to do with national security, and that such investigations were not something the NSC was going to get involved in or push.”

That differs from the account of Sondland, a wealthy businessman who donated $1 million to Trump inauguration and testified before the impeachment investigators that no one from the NSC “ever expressed any concerns.” He also testified that he did not realize any connection between Biden and Burisma. Sondland was dubbed one of “the three amigos,” along with Energy Secretary Rick Perry and special envoy Kurt Volker, working on Ukraine outside normal channels.

For the call between Trump and Zelenskiy, Vindman said he listened in the Situation Room with colleagues from the NSC and Vice President Mike Pence’s office and was concerned. He said he again reported his concerns to the NSC’s lead counsel.

He said he is not the whistleblower, the still unnamed government official who filed the initial complaint over Trump’s conversation with the Ukraine president that sparked the House impeachment inquiry. He said he does not know who the whistleblower is. 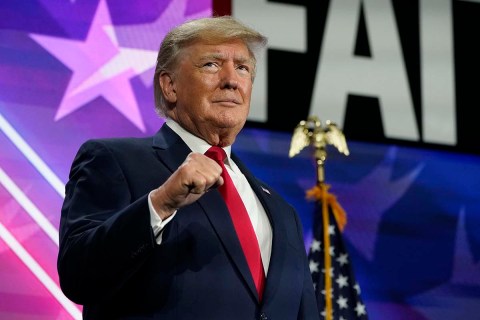