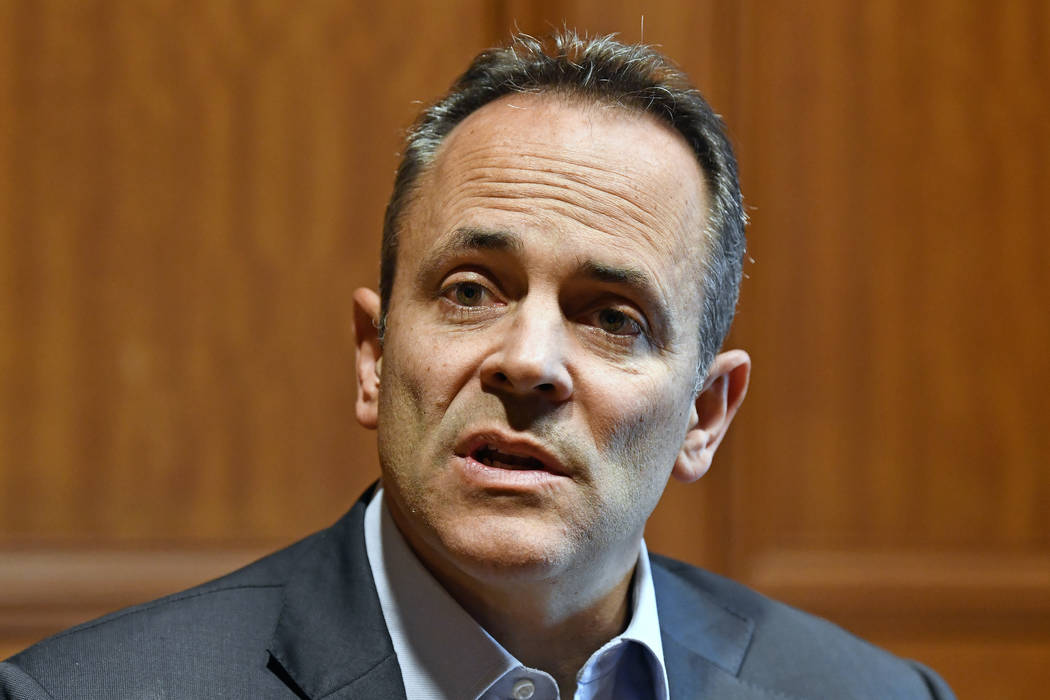 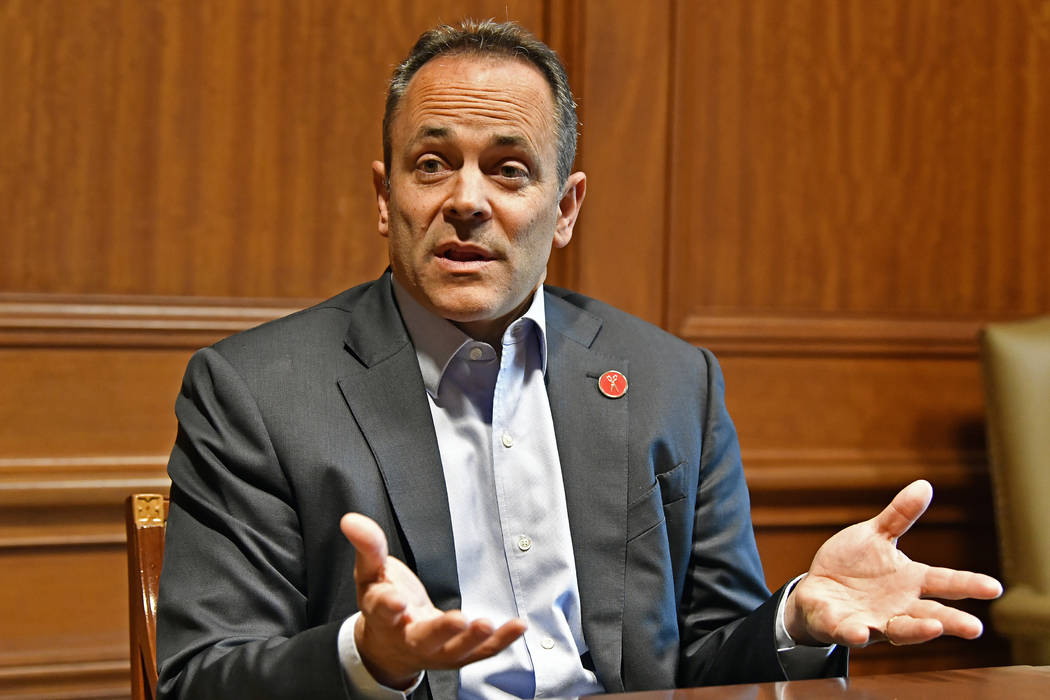 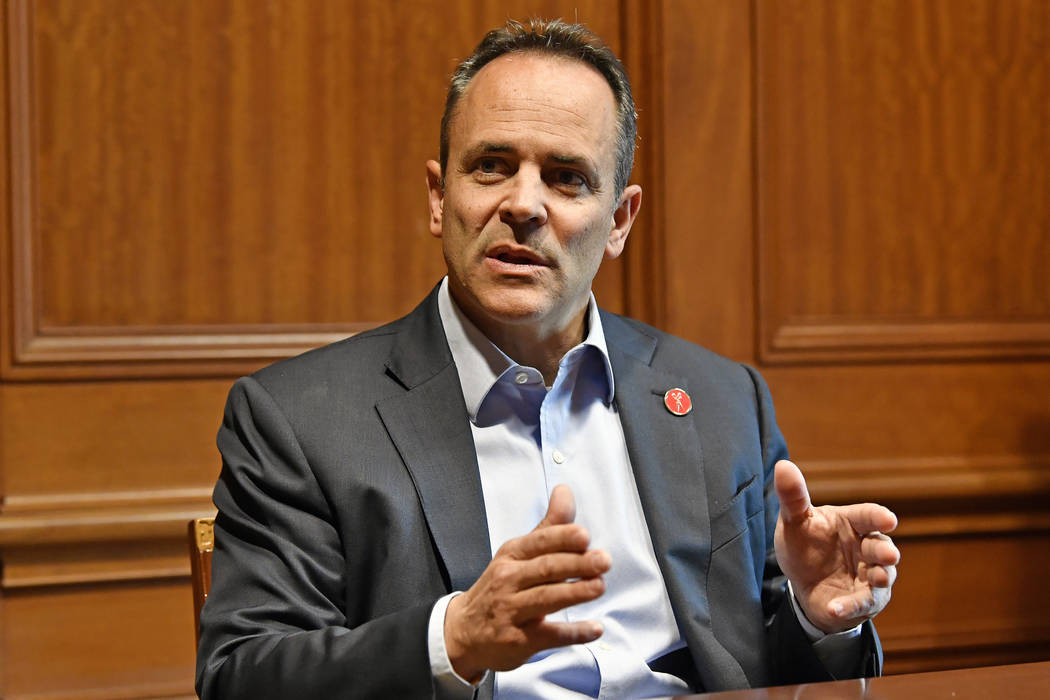 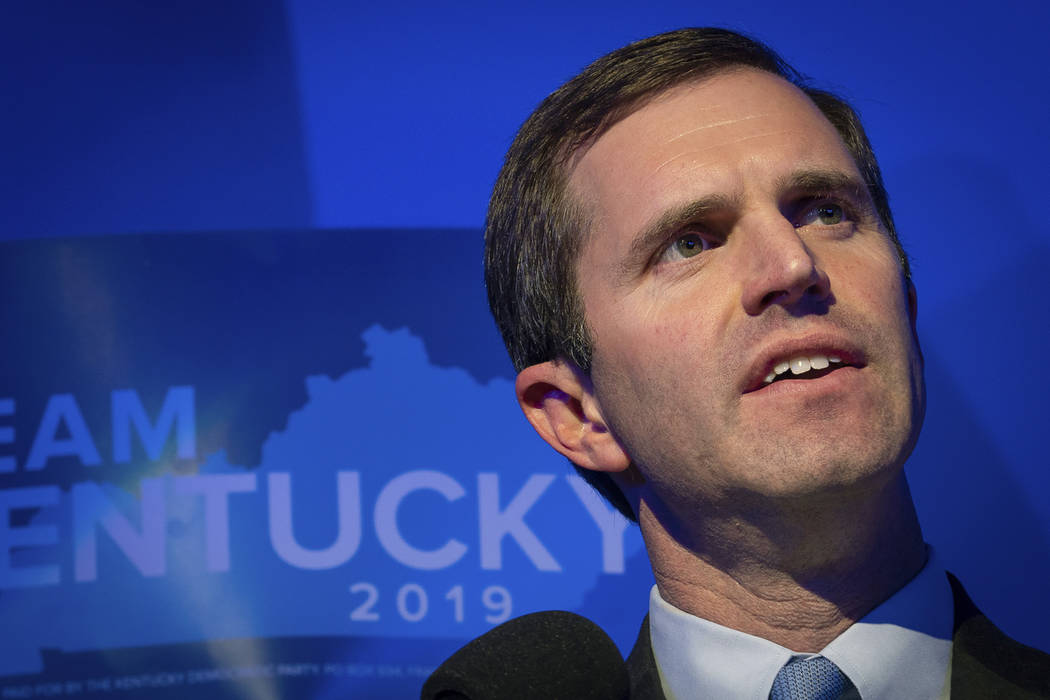 FILE - In this Nov. 5, 2019, file photo, Democratic gubernatorial candidate and Kentucky Attorney General Andy Beshear speaks at the Kentucky Democratic Party election night watch event in Louisville, Ky. Republican Gov. Matt Bevin could face a legacy-defining decision once a recanvass of the Kentucky vote count is completed Thursday, Nov. 14. He can concede to Beshear or contest last week’s election and potentially put the outcome in the hands of lawmakers. (AP Photo/Bryan Woolston, File) 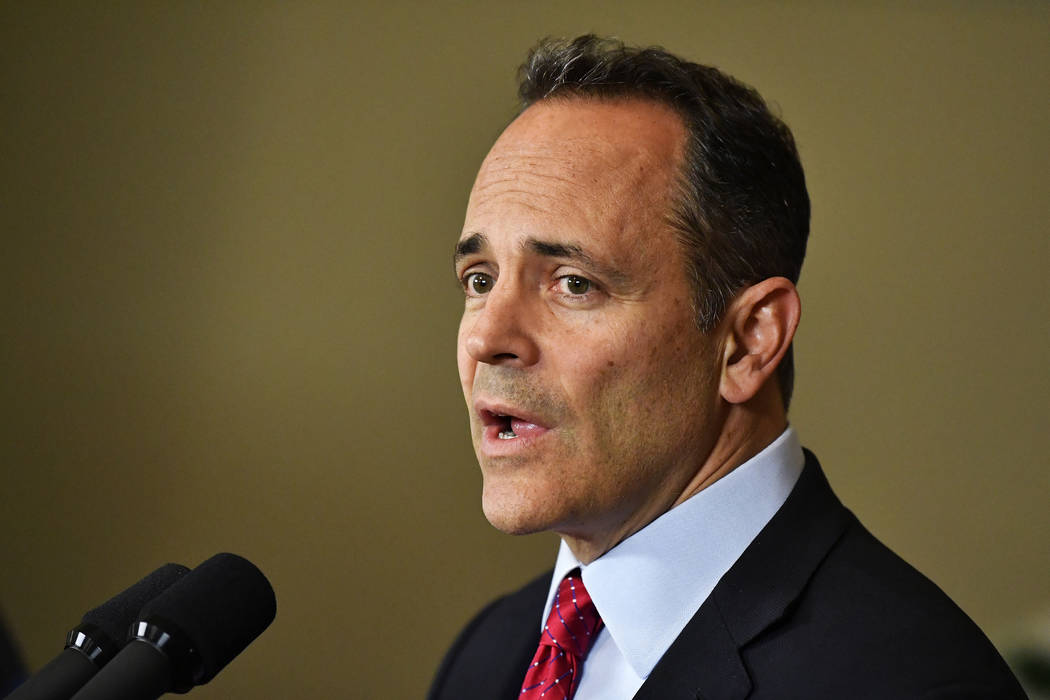 FILE - In this Nov. 6, 2019, file photo, Kentucky Gov. Matt Bevin announces his intent to call for a recanvass of the voting results from Tuesday's gubernatorial elections during a press conference at the Governor's Mansion in Frankfort, Ky. Bevin could face a legacy-defining decision once a recanvass of the Kentucky vote count is completed Thursday, Nov. 14. He can concede to Democrat Andy Beshear or contest last week’s election and potentially put the outcome in the hands of lawmakers. (AP Photo/Timothy D. Easley, File)

Bevin, an ally of President Donald Trump, made the dramatic announcement outside his statehouse office on the same day election officials across Kentucky double-checked vote totals at his request. Bevin, who trailed by several thousand votes, acknowledged that the recanvass wouldn’t change the outcome.

“We’re going to have a change in the governorship based upon the vote of the people,” Bevin said at the news conference.

Members of Bevin’s administration watched solemnly as the pugnacious governor graciously wished Beshear — the state’s attorney general — well in his new role. It capped a nearly four-year rivalry that overshadowed Kentucky politics. Beshear, wielding his authority as the state’s top lawyer, challenged a series of Bevin’s executive actions during their terms. Their feud spread to the campaign trail and a series of bare-knuckled debates this year.

The new governor-elect was scheduled to meet with reporters later in the day.

Last week’s election results showed Bevin trailing Beshear by more than 5,000 votes out of more than 1.4 million cast, for a lead of less than 0.4 percentage points.

Secretary of State Alison Lundergan Grimes said in a statement that Thursday’s recanvass of vote counts did not alter results of the election. The state Board of Elections is scheduled to meet Nov. 21 to certify the vote totals.

Bevin promised a smooth transition leading up to Beshear’s inauguration.

“Every single facet of our administration that is desired is ready, willing and able” to assist in the transition, Bevin said.

Bevin vowed not to publicly undermine or second-guess Beshear’s actions once his rival takes his place in the governor’s office.

In the days after the election, Bevin had steadfastly refused to concede while hinting, without offering evidence, that there had been “irregularities” in the voting.

Bevin, however, faced a growing chorus of state Republicans urging him to accept the results of the recanvass unless he could point to evidence of substantial voter fraud.

Beshear, the son of a former two-term Kentucky governor, had already declared victory and has been preparing to become governor in December.

The Kentucky contest was watched closely for early signs of how the impeachment furor in Washington might affect Trump and other Republicans heading into the 2020 election. Bevin railed against the impeachment inquiry and illegal immigration in trying to nationalize the race, while Beshear kept his focus on state issues such as education, health care and pensions

Beshear’s upset win gives Democrats a victory in a state that had been trending heavily toward Republican in recent years.

Beshear followed a disciplined campaign style focused on what he termed “kitchen table” issues, such as health care and education, while capitalizing on Bevin’s penchant for making enemies of teachers and other groups. The new governor-elect avoided talking about Trump, impeachment or other polarizing national issues that risked energizing his opponent’s conservative base.

Trump loomed large in the race as Bevin stressed his alliance with the Republican president in TV ads, tweets and speeches. Trump carried Kentucky by a landslide in winning the presidency in 2016 and remains popular in the state. The president took center stage in the campaign with his election-eve rally in Lexington, the state’s second-largest city, to energize his supporters to head to the polls for his fellow Republican.

But the combative Bevin was unable to overcome a series of self-inflicted wounds, highlighted by a running feud with teachers who opposed his efforts to revamp the state’s woefully underfunded public pension systems. Beshear effectively exploited the feud, branding Bevin as a bully.

Bevin lashed out at teachers who used sick days to rally at Kentucky’s Capitol. In 2018, Bevin asserted without evidence that an unidentified child who had been left home alone somewhere in the state had been sexually assaulted on a day of mass school closings as teachers rallied. He apologized but doubled down earlier this year by connecting a girl’s shooting in Louisville with school closings caused by teacher protests.