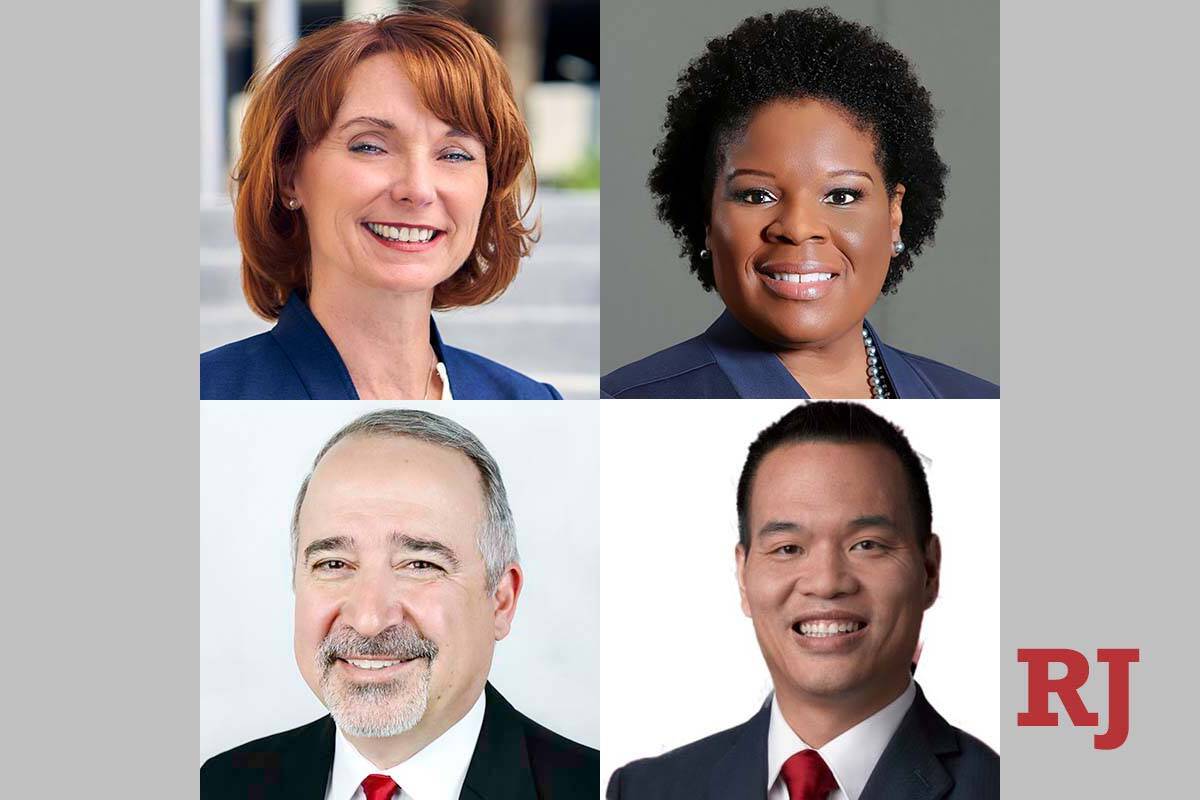 Chief Deputy District Attorney Noreen DeMonte, criminal defense attorney Vincent Ginn, and civil attorney Mark Karris will be on the ballot with Justice of the Peace Cybill Dotson, who was appointed to the position in October.

The Clark County Commission appointed Dotson, who was one of 14 applicants for the Department 10 seat, after former Justice of the Peace Melanie Tobiasson resigned in April 2021 while facing ethics charges.

Dotson, 48, currently oversees domestic violence cases and community court, which handles defendants who receive low-level misdemeanors in the Strip corridor, she said. She graduated from the University of Akron School of Law in 2002 and has practiced civil law in Las Vegas since 2003, mostly focusing on civil litigation and contract law.

Dotson said she approaches judging by making sure everyone in her courtroom has an opportunity to talk.

“They may not agree with my decision, but they will say: ‘Judge Dotson heard me, she listened to me, she gave me an opportunity to speak,’” she said.

Dotson said her 18 years as an attorney gave her enough experience to be an effective judge in both civil and criminal cases.

“I have the experience, I have the temperament,” Dotson said. “I’m really just looking to gain the public trust.”

DeMonte, 46, graduated from Indiana University School of Law in 2002 and began her career as a public attorney in Las Vegas Municipal Court before joining the district attorney’s office in 2004. She currently prosecutes cases focusing on defendants with multiple prior convictions.

DeMonte said she is running for election because she is dissatisfied with judges’ decisions to release some defendants accused of violent crimes while they are awaiting trial.

“There has been a trend of releasing violent, repeat offenders out on the streets to electronic monitors,” she said. “That needs to end.”

DeMonte filed to run for Justice of the Peace Department 7 in 2016, but withdrew a short time later because of personal reasons, she said.

After spending 18 years as a prosecutor who has done nearly 100 jury trials, DeMonte said she is the most qualified candidate in the race.

“I have more experience dealing with the ins and outs of the Justice Court courtrooms and the rules of evidence than all three of my opponents combined,” she said.

“I want to do something that I can make a difference, and it’s the natural progression of a lawyer … you become a lawyer and then later on you become a judge,” he said.

Ginn graduated from Nebraska’s Creighton University School of Law in 2000. He worked as a prosecutor with the Las Vegas city attorney’s office from 2007 to 2010, and is currently a private criminal defense attorney. He served as a judge pro tempore in Family Court for about a year starting in 2016, and has been a volunteer judge for Family Court’s Truancy Diversion Program since 2014.

Ginn said he wants to “bring balance back to the bench,” and that he believes judges aren’t making defendants take accountability for their actions.

“I’m not saying that all judges do this, but there is a push to — ‘well, he’s not the bad guy, it’s society that turned him into a bad guy,’ and I don’t believe in that,” he said.

Karris, 55, was one of the 14 applicants who applied for the Department 10 seat after Tobiasson resigned. Although he was not selected by the Clark County Commission, Karris said he believes his background makes him the most qualified candidate for the job.

“I offer, as a potential candidate and judge in Department 10, a much broader breadth of experience of both criminal and civil,” he said.

Karris graduated from New England School of Law in 1995 and worked as a prosecutor in Essex County, Massachusetts before moving to Las Vegas. He became a prosecutor for the Clark County district attorney’s office in 1999 and entered civil practice in 2000. He currently focuses on business litigation and personal injury cases.

In 2008, Karris filed for election in Justice Court Department 11, but dropped out of the race because of family obligations, he said.

Karris said that he views being a judge as a way to help his community.

“You’re not in it for the money, you’re in it to serve your community, to do justice, and to be an effective and efficient person within our criminal and civil justice system,” he said.