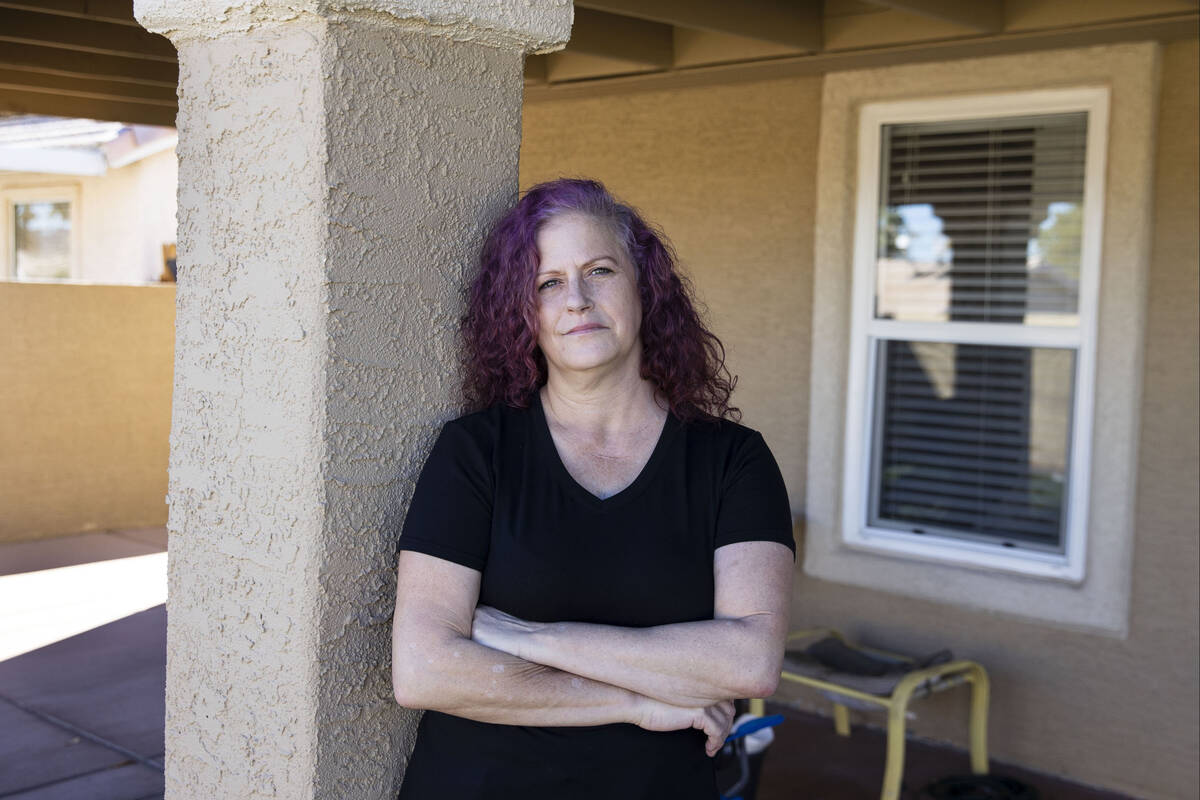 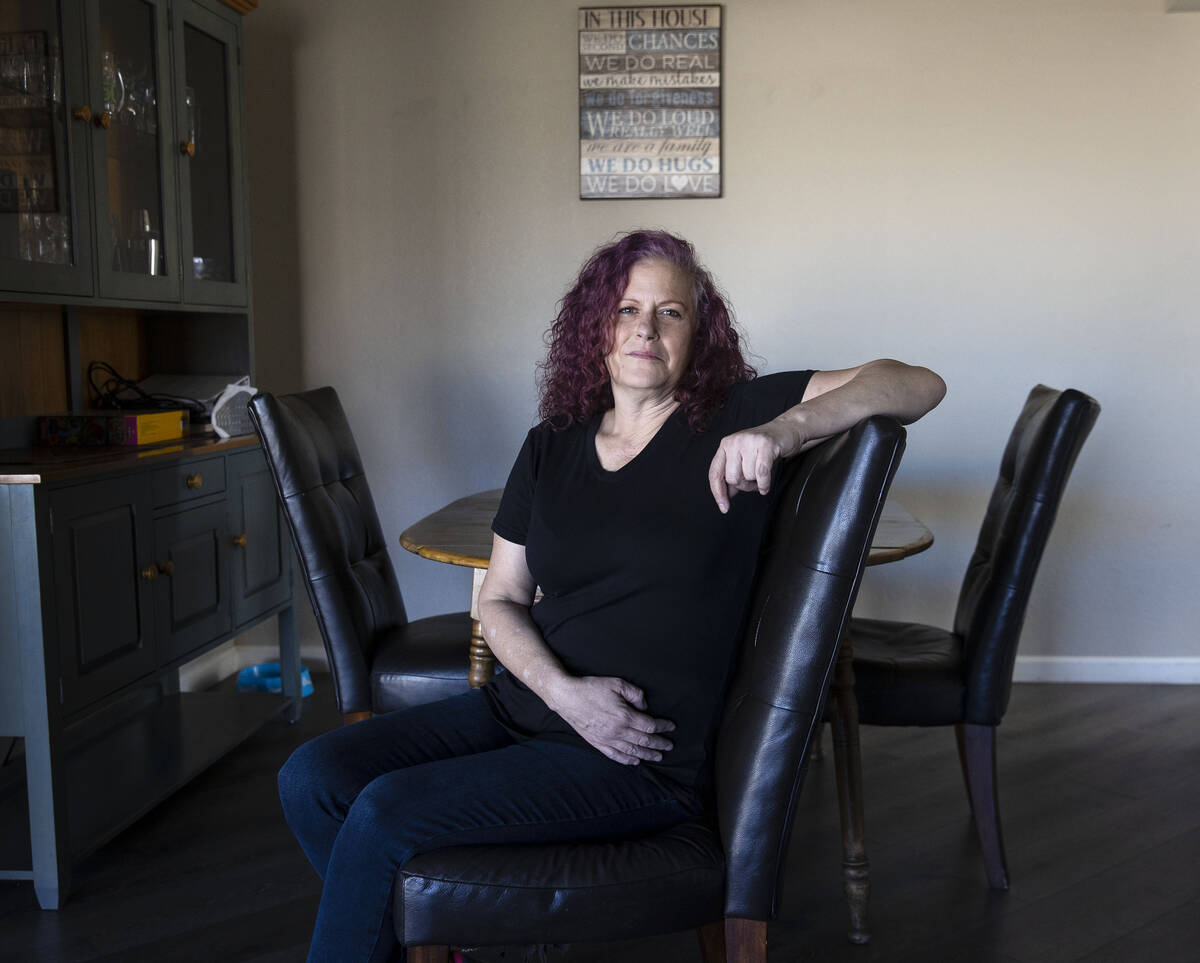 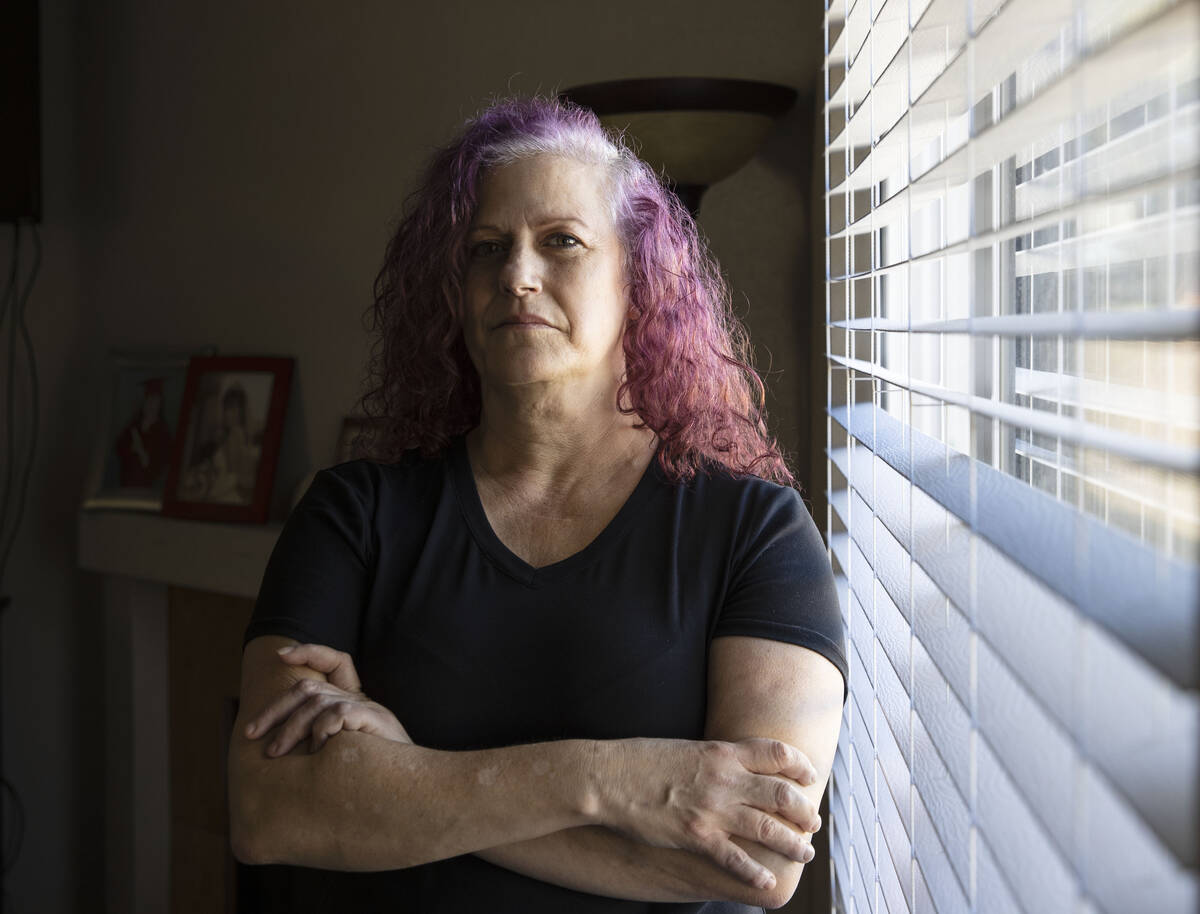 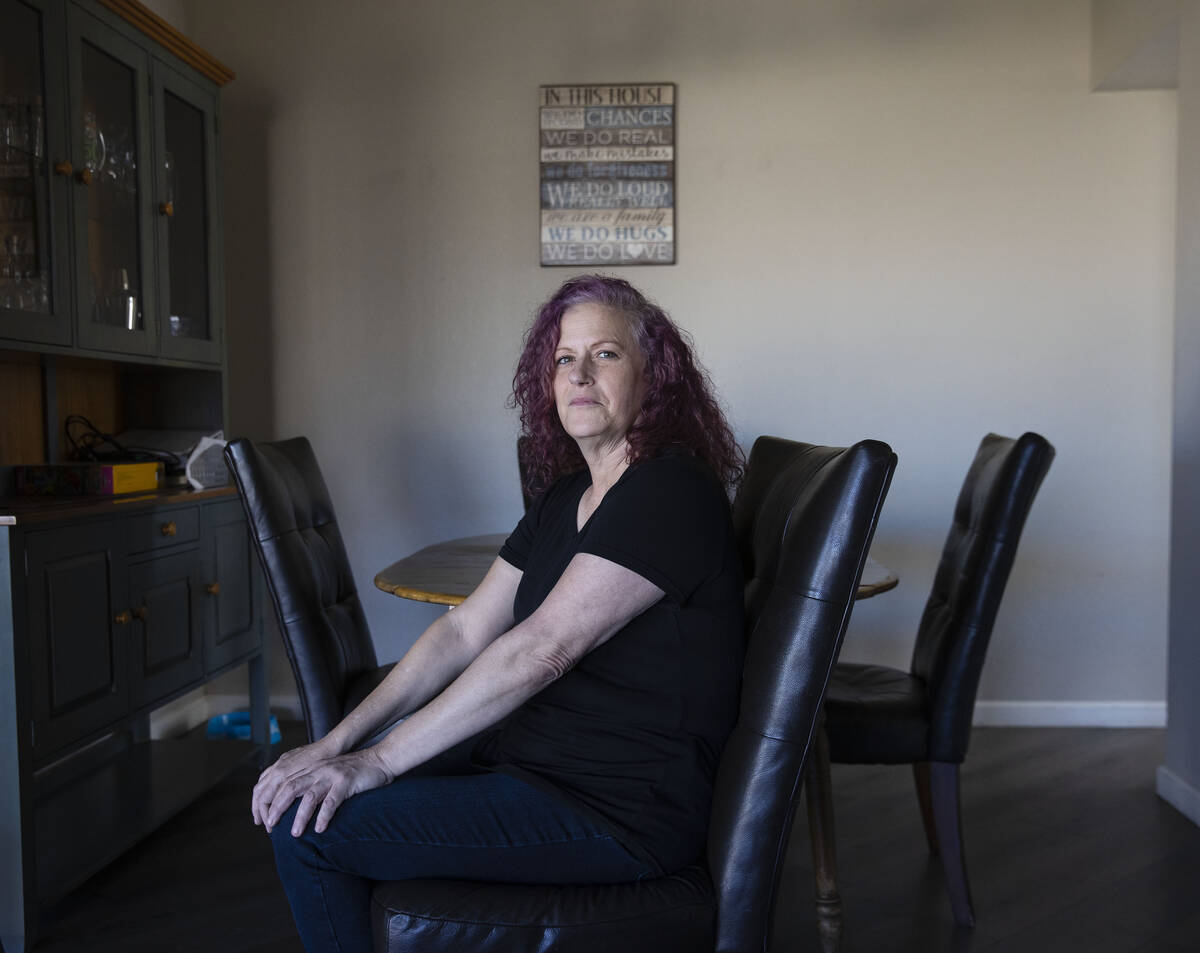 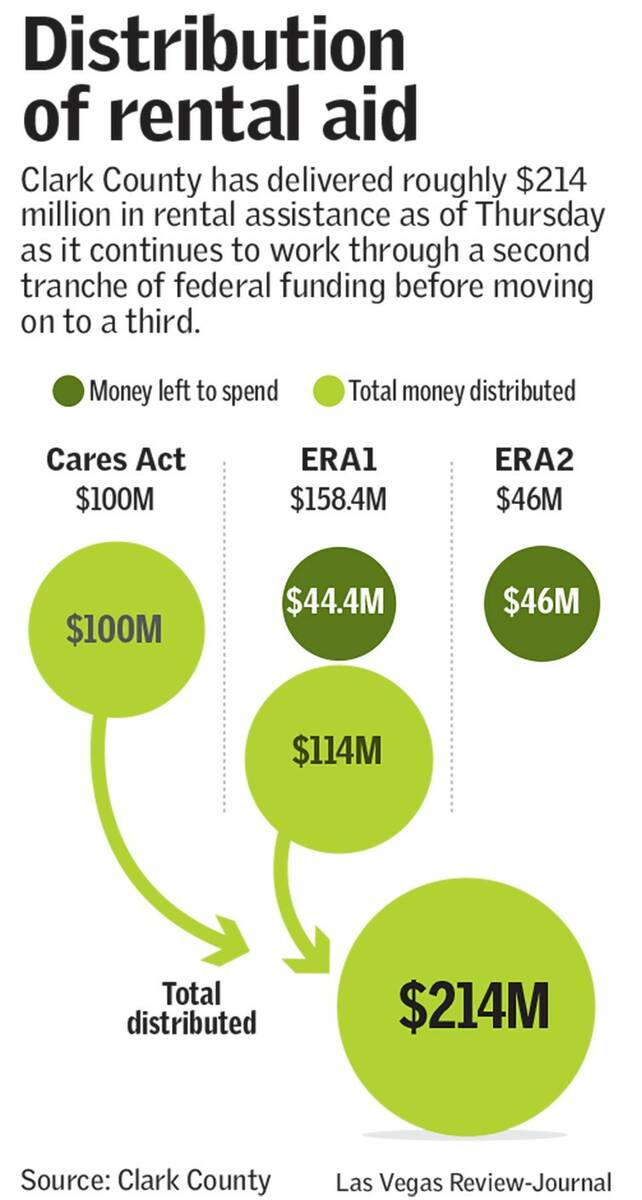 A public health crisis disrupted Bonnie Combs’ livelihood and cast uncertainty over her living situation. Now behind on rent, she faces another unknown: Will rental aid come soon enough?

Combs, a Walmart employee with a compromised immune system, said she has missed work in recent months due to frequent bouts of illness and school closures that required she stay home with her autistic teenage son. That led to a growing pile of medical bills, a recent bankruptcy and falling behind on rent since April.

Now she fears eviction, a prospect facing many Nevadans as the COVID-19 pandemic stretches on, though one that officials say has yet to become the cascade that they feared.

Referred by a friend, Combs, 50, said she applied for rental assistance through Clark County in early September. But nearly two months later, she is still waiting to be assigned to a caseworker.

“There’s so much money available and no one can access it,” she said.

A year after the launch of its automated portal, the county-administered CARES Housing Assistance Program (CHAP) remains flooded by extraordinary demand, despite having distributed more than $214 million in aid as of Thursday.

Officials cannot move money quickly enough to keep up with the caseload and they worry about maintaining qualified temporary staff needed to support the program. Threatening to potentially add to the logjam, there is evidence that federal relief packages that covered rental assistance underfunded the state.

None of those reasons matter to applicants facing the prospect of being forced onto the streets. Their concerns are only deepened by the application process itself, a busy automated hotline meant to assist applicants and uncertainty over the status of applications.

“The system is broken,” Combs said, likening it to delays seeking pandemic unemployment insurance. “It’s so confusing. Every day I go on and check, and I cry.”

County Human Services Administrator Tim Burch acknowledges that applicants continue to face long wait times — an average of six weeks to be contacted by a caseworker after submitting an application. But that is a big improvement, he notes, given that the waiting period was once six months on average.

Progress has been made in other areas as well. Pending applications are down to roughly 6,000 as of Oct. 18 from about 20,000 at one point, while at least 32,500 applications have been processed since the county began providing rental assistance last year, according to a Sept. 21 presentation by Burch to county lawmakers. And officials have provided aid to more than 2,650 households involved in eviction court cases under a proactive initiative that did not exist when CHAP went live in July 2020.

Burch said in an interview that the learning curve while trying to stand up the best possible system more than a year ago was steep. He said staff realized from the start that it would require a new tool scaled to meet intense demand and that the staffing would have to be bulked up to handle the overwhelming need for housing assistance.

“To say the dam broke and then we started building the boat would be a great metaphor,” he said.

The system continues to be refined, including automating the once-manual process for landlords to validate how much rent a tenant owes. And there are dozens of updates in development, according to Burch, who said that “top of the drawing board” is to add incremental notifications so that applicants better understand their status between pending and qualified stages.

Nevada was recently ranked No. 10 in the nation for distributing rental assistance, according to a Nevada Independent analysis of a U.S. Treasury report, a standing Burch largely attributed to the work being performed by county staff and partners such as nonprofits.

“I believe we are one of the more efficient jurisdictions in the country in getting the money out and in the hands of constituents,” he said.

But Burch said the county has maximized its ability to deliver aid with the resources at its disposal.

The county has reassigned more than 100 staff members to the program since last year and it currently has 250 temporary workers dedicated to it, according to county spokesman Dan Kulin.

Kulin said that recruiting and retaining temporary workers who have the necessary level of experience and professionalism has been difficult, leading to a constant hiring of new workers to replace ones who leave and raising internal concerns about the ability to maintain current staffing levels.

While the county delivered the entirety of $100 million in CARES Act funding late last year, it continues to work on distributing ERA1 money before its Sept. 30, 2022 expiration date.

A collective $158.4 million was made available in that second wave of federal funding, stemming from a direct payment to the county in January and reallocations to the county by cities and the state in May and June, respectively.

As of Thursday, the county has delivered roughly $114 million of that ERA1 aid to households, according to county figures. That includes all funding that the county received directly and through the cities of Las Vegas, Henderson and North Las Vegas.

Kulin said the county has distributed 54 percent of its largest source of ERA1 dollars: the state-allocated funding it received most recently.

Spending patterns indicate that the county has moved quickly through the state-provided tranche since last month when it reported having only spent 22 percent of the $93.8 million in available funding. But some $44 million still must be distributed before the county can tap into the roughly $46 million in ERA2 funds available for CHAP.

“It never will be fast enough for us, which is why we’re continually working to make that process faster,” said Erik Jimenez, the chief policy deputy in the state treasurer’s office.

Rental and mortgage assistance has, at least for now, prevented the housing situation from becoming much worse, according to Peter Hepburn, an assistant professor of Sociology at Rutgers University-Newark.

Hepburn is also a research fellow at the Eviction Lab, a research project at Princeton University that has been tracking evictions and housing-related issues during the pandemic. He said that the scale of eviction filings in Las Vegas and most of Clark County are much greater than researchers have seen in other jurisdictions, meaning the feared eviction tsunami could still develop here.

And he said the Eviction Lab identified another troublesome issue: Nevada, through no fault of its own, received the second-lowest amount of federal aid per renter household in the nation.

The formula used for the CARES Act, which delivered funds proportional to total population, had been carried over to the two subsequent programs specific to emergency rental assistance, according to Hepburn. The problem with using total population as a guide is that it ignores the most relevant statistic: the number of renters.

As a result, he said that the federal distribution for ERA1 and ERA2 programs created inequalities between states, even those roughly the same size. For instance, Utah received a similar amount of money as Nevada although it has far fewer renters and higher home ownership rates. Plus the cost of living is lower in Utah and the economy is not as reliant on tourism and the service industry as Nevada’s.

Other hurdles exist; so does help

Kris Kemp, an insurance agent and single father to four children, said he saw work dry up as face-to-face interactions disappeared during the pandemic. Kemp, 47, said he was advised by the Legal Aid Center of Southern Nevada to apply for rental assistance through CHAP, a process he completed with ease.

“The only thing I found frustrating was it took months and months,” he said. “I didn’t know if I was going to be kicked out of my house before I got an answer.”

Kemp said he was assigned to a caseworker in January, roughly six months after initiating the process, and the aid came soon after. He was not among those who had to provide new documentation in the spring to comply with shifting federal guidelines between CARES Act and ERA1, a wrinkle which led to delays for other applicants with incomplete paperwork.

With his business still struggling, Kemp said he reapplied for additional assistance on Monday. And while he faces an unenviable situation, others scramble into the system with literally only hours to spare.

Some tenants do not understand that a seven-day notice to either pay rent or leave their property is a legal notice, according to Barbara Buckley, the director of the Legal Aid Center of Southern Nevada. As a result, she said some tenants are left with 24 hours to respond to the subsequent eviction notice and often rush to seek rental assistance under a compressed timeline.

Buckley advised people to respond to all notices, to elect and attend mediation sessions and to immediately file an application with CHAP to see if they qualify. The decision is even more consequential after the recent passage of a Nevada bill that pauses eviction proceedings for tenants who have rental assistance applications in the queue.

Buckley also noted that help, including assistance appealing an eviction filing or completing CHAP paperwork, is available to those who need it. The legal aid center has assisted more than 11,000 people at its main office this year, she said.

Another resource, the Civil Law Self-Help Center, located at the Regional Justice Court in downtown Las Vegas, has seen more than 36,000 people in 2021, according to Buckley.

Buckley believes that efforts by a broad team in Southern Nevada — including the county, courts, the legal aid center, nonprofits and mediators — have prevented thousands of avoidable evictions.

“If we hadn’t taken all of these actions, we would have exacerbated the public health crisis and destroyed lives,” she said.