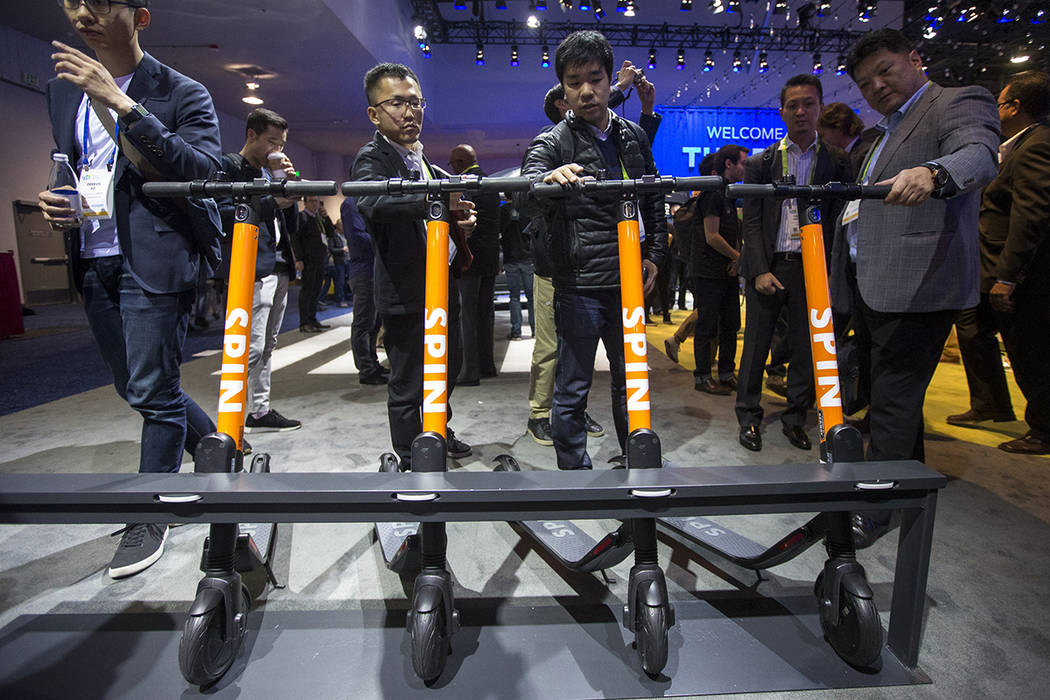 Attendees browse over the Spin electric scooters on display at the Ford Motor Co. booth on day one of CES at the Las Vegas Convention Center in Las Vegas on Tuesday, Jan. 8, 2019. Richard Brian Las Vegas Review-Journal @vegasphotograph

The prospect of bringing a modern transportation phenomenon to Clark County was met with a less contemporary adage: Don’t put the cart before the horse.

As cities across the U.S. wrangle with the emerging ride-sharing business, Clark County officials say they are not quite ready to embrace electric scooters — even as a pilot program.

Instead, policymakers prefer to watch Nevada lawmakers who will consider creating a new vehicle category for motorized scooters while defining rules and restrictions for the industry.

“I think it would be so premature of us as a county to not wait to hear what the Legislature has to say,” Commissioner Lawrence Weekly said during Tuesday’s County Commission meeting.

Officials also underscored that they would want local control in all aspects of any deployment after finding less regulatory success with ride-hailing companies like Uber and Lyft.

Opinions differ about whether Nevada laws governing electric bicycles apply to the scooters, which would allow them to operate now. Reno fought the rollout by scooter company Lime, while Henderson has requested a temporary operating agreement for 500 scooters from Bird Rides Inc.

“We are in discussions with them, but it is all very preliminary at this point,” Henderson spokeswoman Kathleen Richards said Tuesday.

Bird, the rentable e-scooter company, pitched county commissioners Tuesday on a test run in Downtown Summerlin and has pledged not to deploy without the county’s blessing, according to Neil Tomlinson, a managing partner with Hyperion Advisors, which represents Bird.

Bird, founded in September 2017, operates in over 125 cities, mostly in North America, Ortegon said, and the scooters could provide a solution for commuters in Clark County on first mile/last mile transit, a term for the short trips to and from major transportation modes like buses and vehicles.

The scooters have drawn support from the Regional Transportation Commission, Tomlinson said, but an RTC spokeswoman did not return a message Tuesday seeking specifics about the commission’s appetite.

Tomlinson said he also envisions the scooters linking Symphony Park to downtown and generally filling the gap in transportation deserts — typically low-income or at-risk areas — where options are scarce.

Even as some commissioners were open to identifying limited pilot areas and acknowledged potential in sections like downtown or near UNLV, far more questions were raised than answered, and Commissioner Marilyn Kirkpatrick was clear that scooters would never be acceptable on the Strip.

“There’s a lot of missing information and a lot of wordsmithing, so I could never vote for a pilot program because, I think of Downtown Summerlin, that’s already congested,” she said. “Where on God’s green Earth would you put them? And who would regulate them? And what happens liability-wise when somebody doesn’t have the helmet that gets hurt?”

Officials were aware of the problems that have plagued other cities that have rolled out electric scooters — capable of traveling 21 mph and meant for bike lanes — like them being ridden on sidewalks and parked as inattentively as shopping carts.

Las Vegas, which as late as September had been entertaining a pilot program with Lime, decided not to pursue a plan because of those concerns, city spokesman Jace Radke said.

But Ortegon said Bird has addressed many of those problems by incentivizing proper parking and riding and by issuing demerits to those who fail to follow rules that could lead to kicking a user off the platform.

The company also employs geofencing technology that governs users who ride into restricted areas. If a user does travel outside a permitted zone, they may finish their ride, but once they park, the scooter is inoperable to the next user, and Bird will come pick it up.

“A lot of the issues that you see in the headlines, we have made a lot of progress,” Ortegon said.

However, before a limited, controlled introduction might be tested in the county, Kirkpatrick concluded, Bird and any other scooter ride-sharing companies have “homework” to do.