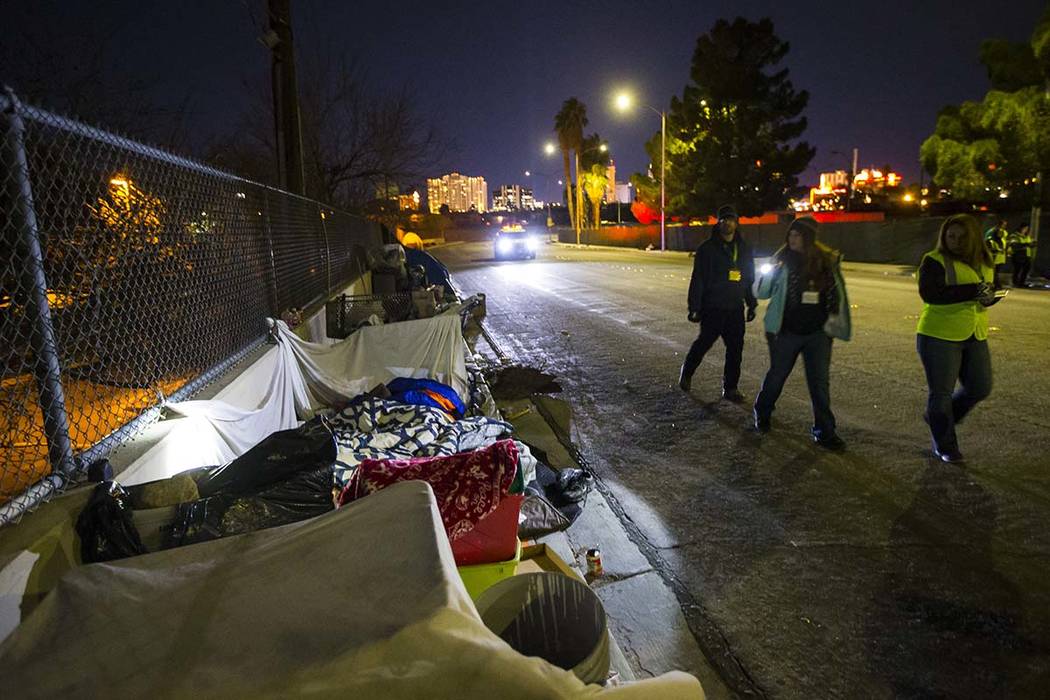 A new report paints the most comprehensive picture to date of the current homeless population in Clark County.

The county on Thursday presented a breakdown of the 5,530 homeless people counted during this year’s annual Southern Nevada Homeless Census.

The report, composed of infographics and fact sheets, includes data from the census, a survey of unsheltered homeless and information tracked from the Homeless Management Information System, a coordinated system that tracks clients’ use of social services.

This year’s total is the lowest since the county began counting the homeless 12 years ago and shows a 9 percent decrease from last year.

The county uses that data to secure federal funding. In each of the past two years, Southern Nevada received about $14 million in grants for homeless programs.

In total, the number of homeless people counted in shelters and on the streets this year is 244 more than shown in the county’s preliminary report released last month.

“We anticipated there would be a change because we had one shelter that did not report all of their data into HMIS, and so we were not able to track all the data at that time,” said Michele Fuller-Hallauer, the county’s social service manager.

Her comments came during the monthly Continuum of Care meeting, where government officials, businesses and advocates discuss a regional approach to homelessness.

One striking number estimates that 622 individuals are chronically homeless on any given night in Southern Nevada, an increase of 19 percent from last year.

“What that tells us is that folks are staying homeless longer in our community,” Fuller-Hallauer said.

A chronically homeless individual has a disabling condition and has been homeless for a year or longer continuous — or repeatedly — while struggling with mental illness, substance abuse or physical disability.

“They need a lot of support; they need intense case management and wraparound services, and they need housing,” Fuller-Hallauer said. “They need ongoing assistance for an indeterminate length of time.”

This year, some 400 volunteers canvassed the streets over two days and nights in January, more than twice as many as last year. The volunteers covered the same amount of territory — 708 census tracts.

Sixty percent of the total homeless counted were unsheltered, living on the streets, in the desert, the tunnels, or staying in the city of Las Vegas’ Courtyard Homeless Resource Center, the new report said.

The county’s shelters were also 91 percent full during the point-in-time count.

“Folks are accessing the shelters, but obviously we don’t have enough shelters for everybody to come inside if they are willing to come inside,” Fuller-Hallauer said.

Following the count, the county estimates that about 14,114 people will experience homelessness in Clark County at some point this year.

A housing-first approach to homelessness has been emphasized in recent months, with the county setting aside about $12 million in marijuana business licensing fees toward housing programs for families with children.

The city of Las Vegas is also getting behind the housing initiative. This week, it put its weight behind a $22 million project to construct a 420-unit apartment complex, with 386 affordable housing units.

There’s a need: Nevada leads the nation as the state with the greatest shortage of affordable housing for low-income households. For the first time, the county included housing information in its report.

In Southern Nevada, a household must earn a wage of $18.85 an hour just to pay the rent for a two-bedroom home, the report said.

In 2018, 585 families entered into homelessness. But, in that same system, homeless service providers in Southern Nevada were able to permanently house 1,971 families, the report said.

Also this year, Nevada held its place as the state with the highest rate of youth homeless. The census counted 1,184 unaccompanied youths. Of those, 82 percent were unsheltered.

The top five causes of those experiencing homelessness, according to the survey of 352 homeless on Clark County streets, are lost job or unemployment, alcohol or drug abuse, mental health issues, asked to leave family or friends’ home, and illness or medical problems.

“We still have a lot of work to do. Progress is slow, but we need to ramp up our efforts, ramp up our resources and not give up,” Fuller-Hallauer said.

“We look forward to the day that we have a healthy enough system to meet the needs of folks experiencing a housing crisis.”