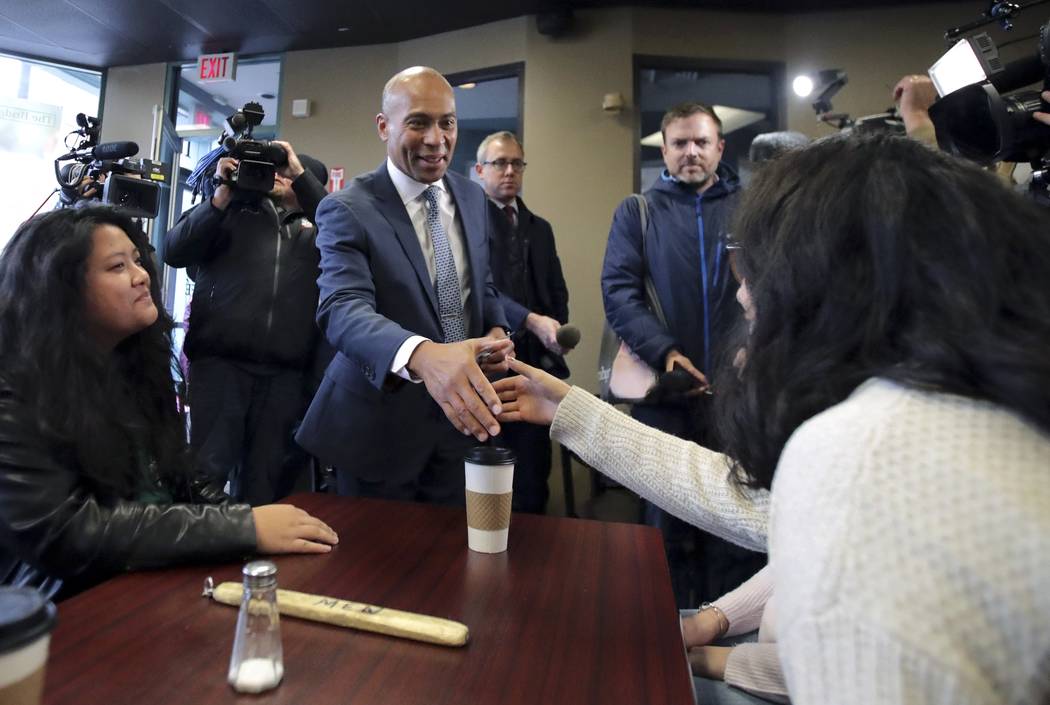 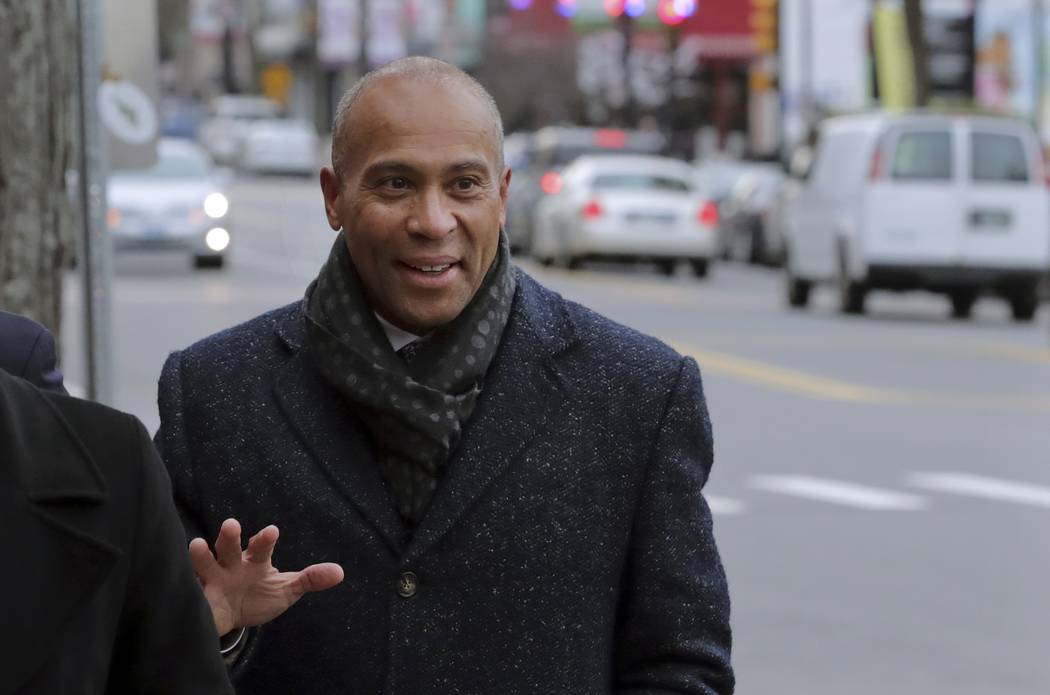 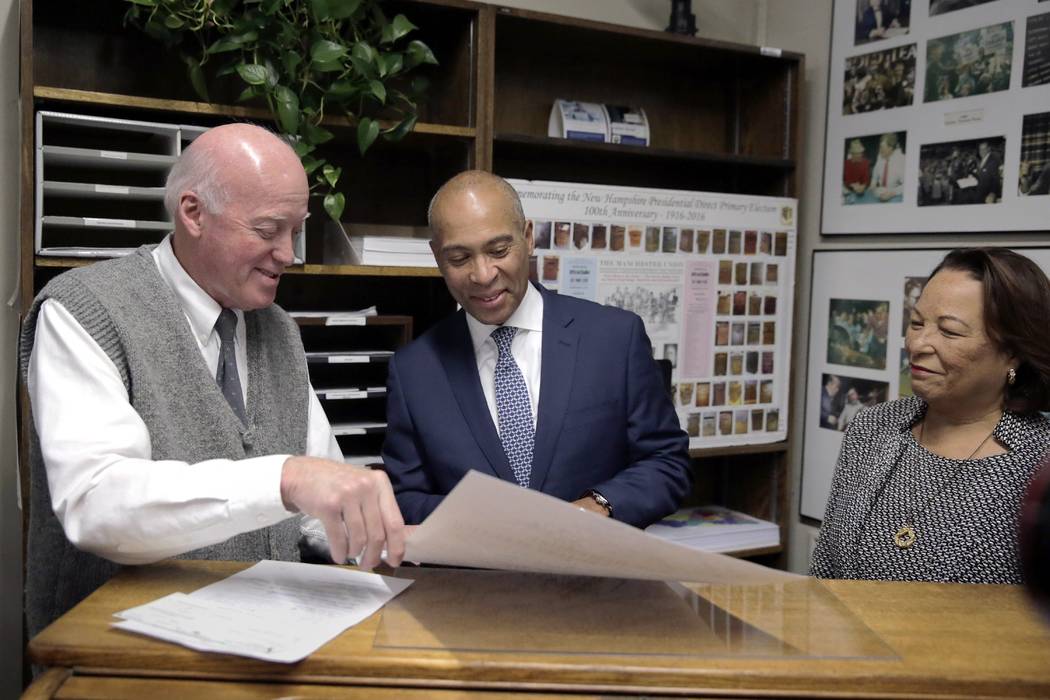 Democratic presidential candidate former Massachusetts Gov. Deval Patrick hands back to New Hampshire Secretary of State Bill Gardner, left, a document that candidates from this New Hampshire primary sign with their name and campaign slogans, after he signed it while filing to have his name listed on the primary ballot, Thursday, Nov. 14, 2019, in Concord, N.H. At right is his wife Diane Patrick. (AP Photo/Charles Krupa) 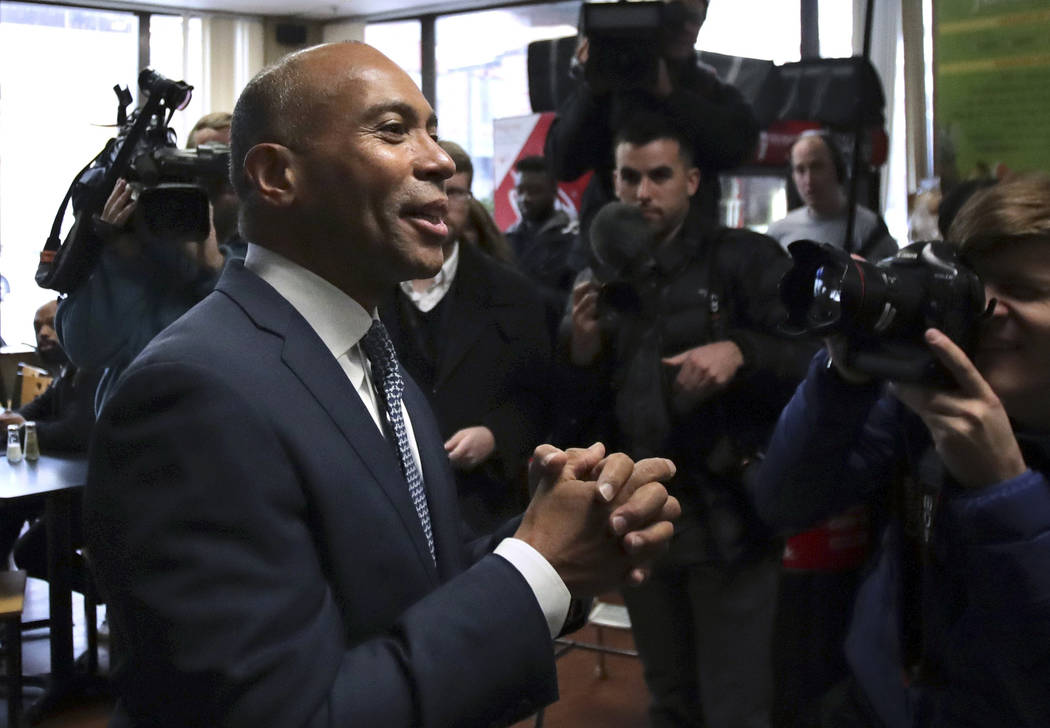 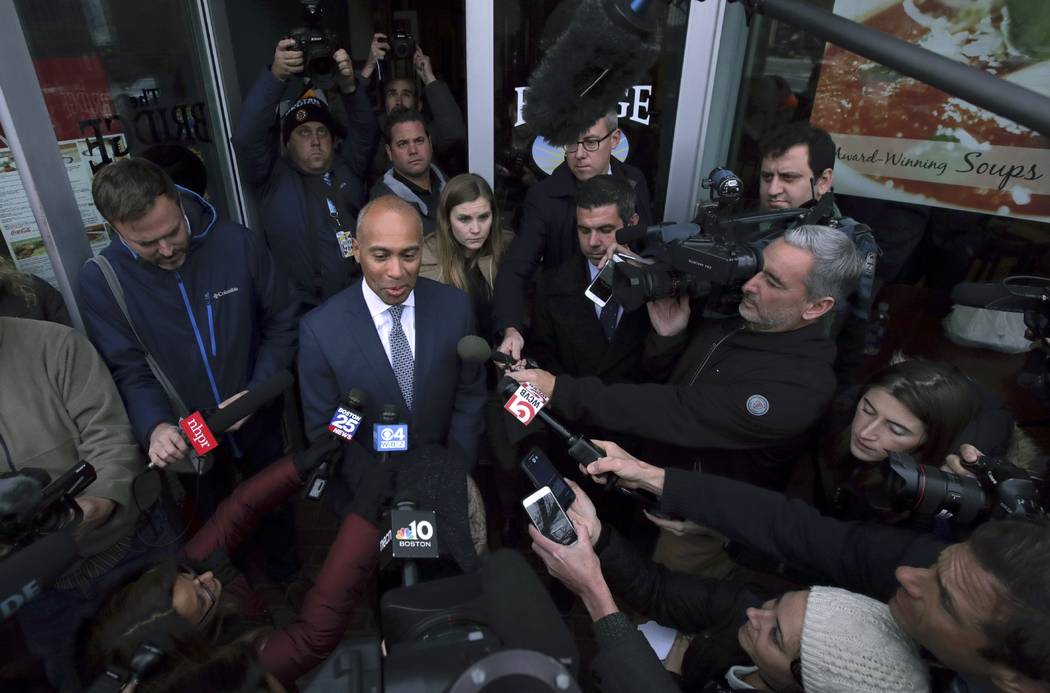 WASHINGTON — Deval Patrick launched what he acknowledged to be a “Hail Mary” bid on Thursday for the Democratic presidential nomination, testing whether voters sifting through an already crowded field are open to hearing from new candidates less than three months before the primary voting officially begins.

Raised in poverty on the South Side of Chicago, Patrick made history in 2007 as the first black governor of Massachusetts. He has close ties to former President Barack Obama and his network of advisers, which could help him quickly establish contacts and raise money in the critical states that begin voting in February.

But his late entry presents significant organizational and financial hurdles. It’s also unclear whether black voters, who have largely backed former Vice President Joe Biden, would shift to him. Two other black candidates in the field, Sens. Kamala Harris of California and Cory Booker of New Jersey, are languishing in the polls.

Still, Patrick is betting there’s a narrow window to shake up a Democratic primary that has stagnated in recent months with four persistent front-runners, each of whom has glaring vulnerabilities. At a time of bitter partisan divides, the 63-year-old Patrick is positioning himself as a political leader who can work on progressive causes without alienating moderates who worry about the pace of change being advocated by some Democratic candidates.

“But I think that there has to be more than the big solutions,” he told reporters at the statehouse in New Hampshire, where he registered to appear on the ballot in the first-in-the-nation primary, expected to be held on Feb. 11. “We have to use those solutions to heal us.”

Such comments were a none-too-subtle dig at another presidential candidate from Massachusetts: Elizabeth Warren. The senator has risen to the top of the Democratic pack in recent months with calls for fundamental changes to the American economy, including a wealth tax and a shift to a government-run health care system known as “Medicare for All.”

Patrick credited Warren with running the “best and most disciplined campaign” in the field and praised her as “incredibly smart” and “incredibly thorough in her policy positions.”

“I think the actual business of advancing an agenda once elected is a different kind of undertaking,” he said.

Patrick told CBS earlier Thursday that he doesn’t support Medicare for All “in the terms we’ve been talking about.”

Patrick is the third major black candidate in the race. The other two, Harris and Booker, have struggled to gain traction in part because black voters have so far sided with Biden.

His announcement comes as some Democrats worry about the strength of the party’s current field of contenders. Another Democrat, former New York City Mayor Michael Bloomberg, is also weighing a last-minute bid for the party’s nomination. Even 2016 nominee Hillary Clinton said this week in a BBC interview that she is “under enormous pressure from many, many, many people to think about it,” adding that she has no such plans but still would “never, never, never say never.”

Texas Democratic Chairman Gilberto Hinojosa, whose state boasts the second-largest number of Super Tuesday delegates behind California, argued that donors and the media are mistaken to think that rank-and-file Democrats see Biden, Warren and others as unable to take down Trump.

Pace reported from Washington. Associated Press writers Bill Barrow and Will Weissert contributed to this report.