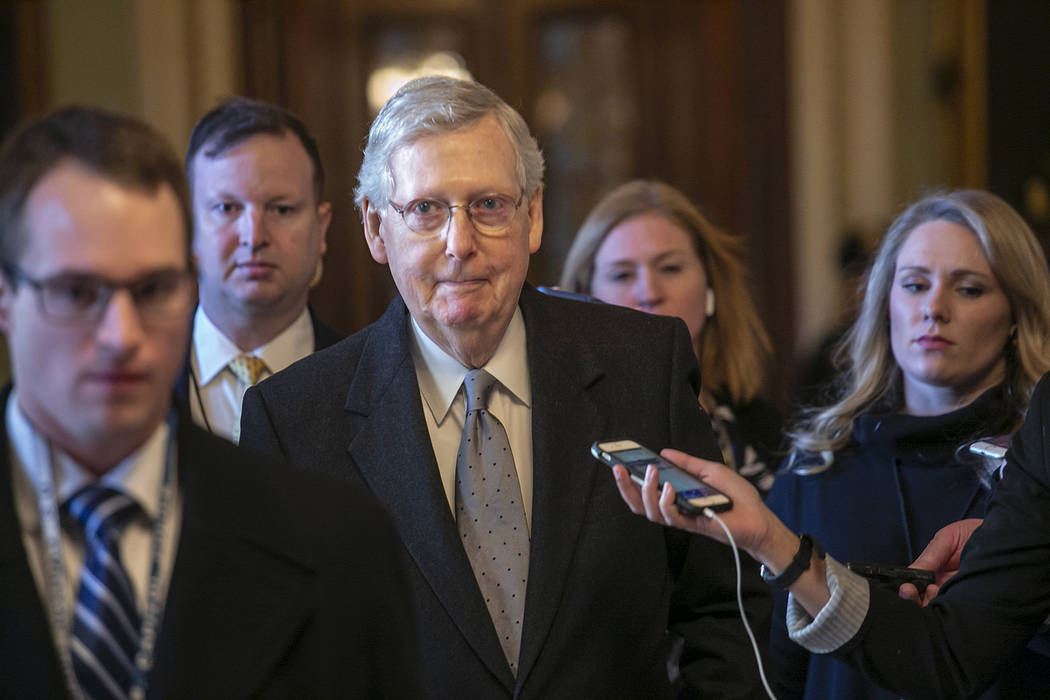 WASHINGTON — Senate Majority Leader Mitch McConnell forced a procedural vote Tuesday on the controversial Green New Deal to expose a divide in the Democratic ranks on a topic Republicans hope to use as a political wedge issue in 2020.

The vote came just hours after President Donald Trump huddled with Republican senators at their weekly policy luncheon on Capitol Hill, and days after special counsel Robert Mueller cleared the president of collusion with Russians to influence the outcome of the last presidential election.

“He’s in a good mood,” McConnell, R-Ky., joked about Trump before preparing for a vote that Republicans hope will win over centrist voters at the ballot box.

McConnell told reporters before the roll call was taken that he was glad the “American people will have the opportunity to learn precisely where each of their senators stand on the ‘Green New Deal,’ a radical, top-down, socialist makeover of the entire U.S. economy.”

The Republican leader said implementing the plan would send home heating bills soaring by more than $300 a month.

But Democrats called out Republican leaders for holding a “show vote” on a bill that none of them supported.

The majority of Senate Democrats voted “present” to dull the political impact of the vote on a resolution introduced in the Senate by Sen. Ed Markey, D-Mass., and in the House by Rep. Alexandria Ocasio-Cortez, D-N.Y.

It is co-sponsored by senators seeking to challenge Trump in 2020.

The resolution calls for the elimination of greenhouse gasses by 2030 and a transition to a reliance on renewable energy, a proposal backed by conservation groups and environmentalists.

But the timetable for reaching that goal has been criticized by manufacturers and energy producers as impractical.

Republicans succeeded in putting Democratic lawmakers on the record, and the procedural motion to begin debate on the bill died 57-0. Not one single senator voted to debate the bill.

There were 43 Democrats, including Nevada Sens. Catherine Cortez Masto and Jacky Rosen, who voted present.

“It is a stunt and it’s a scam and we are showing it for what it is,” Cortez Masto told the Review-Journal.

Cortez Masto, who heads the Democratic Senatorial Campaign Committee, said Republicans did not support the resolution, and have failed to work with Democrats to discuss climate change or hear scientific evidence in congressional hearings to evaluate what can be done.

“Climate change is real. It’s harming our country. It’s having an impact on our economy,” she said.

In Nevada, Cortez Masto said, we have had “the worst wildfire season ever, and it’s no longer a season. We are having wildfires all the time.”

Cortez Masto said there have been 138 fires reported in Nevada since June 2018 by the Bureau of Land Management and the U.S. Forest Service.

She said she would continue to support legislation that supports renewable energy production and creates good-paying green jobs in Nevada.

Senate Minority Leader Chuck Schumer, D-N.Y., said the GOP vote on the resolution is backfired, showing that “the Republican Party is way behind the times on clean energy.”

Still, McConnell and Republican leaders were clearly anxious to force Democrats to “duck” what Sen. John Barrasso, R-Wyo., called “a big green bomb that will blow a hole in our strong and healthy economy.”

The Green New Deal suffered a botched roll out when House staff included language to eliminate farting cows and airplanes. The initial plan also served to sharpen the divide between urban and rural Democrats in swing states and districts.

After the February roll out by Ocasio-Cortez and Markey, the document was pulled back and reissued. Still, the proposal lacked the backing of industries and attacked by agricultural producers who complained it would hurt family farmers.

It was panned by the AFL-CIO, which worried that implementing the proposals would choke construction projects and hurt middle-class workers.

McConnell called the deal “delusional” and GOP leaders, including Sen. Jodi Ernst of Iowa, have seized on the proposal to expose the divide between New York urban liberals and conservatives in Midwest states.

Ernst told reporters earlier this month that latte-drinking Democrats were trying to keep rural middle class moms from driving their cars to pick up their school-aged children and going to Walmart.

Many of the GOP attacks have targeted Ocasio-Cortez, a democratic socialist who Republicans seek to paint as the face of the Democratic Party following the GOP’s huge losses in the 2018 midterm elections that saw Democrats retake control of the House.

In a tweet, Ocasio-Cortez called the Senate roll call a “stunt vote” and chided Republicans for not engaging in a real conversation about climate change caused by emissions.

Markey also struck back at Republicans, who used cartoon characters of dinosaurs to poke fun at the proposal at a time when changes in climate have produced devastating natural disasters, including the flooding that has inundated the Midwest.

“Climate change is not a joke,” Markey said. “Mocking it is shameful.”