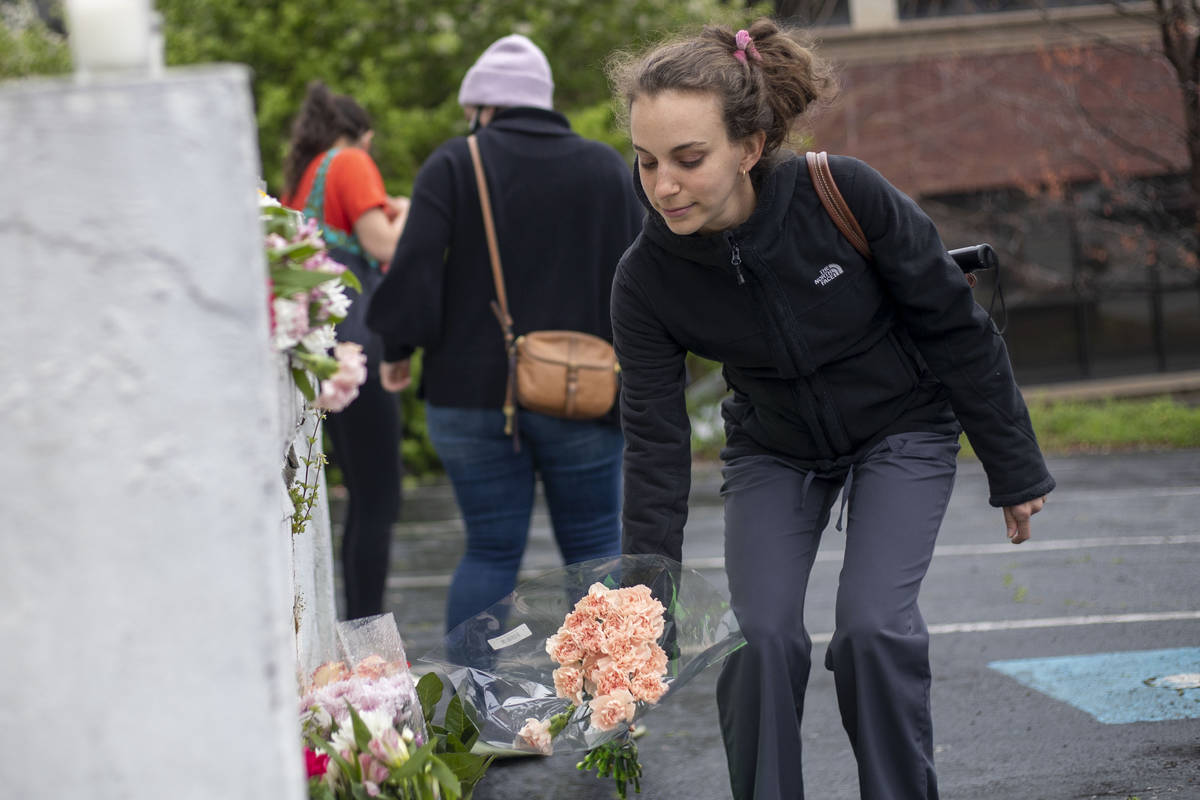 A woman places flowers near a makeshift memorial outside of the Gold Spa in Atlanta, Wednesday, March 17, 2021. Police in the Atlanta suburb of Gwinnett County say they've begun extra patrols in and around Asian businesses there following the shooting at three massage parlors in the area that killed eight, most of them women of Asian descent. (Alyssa Pointer/Atlanta Journal-Constitution via AP)

WASHINGTON — An attempt to reform gun laws and strengthen background checks appears to have stalled in the Senate as the country grapples with recurring mass shootings.

Mass casualties from attacks in Atlanta, Boulder, Colo., and Indianapolis led President Joe Biden and leaders in the House and Senate to push for compromise legislation. And the president is likely to reiterate his demands when he addresses a joint session of Congress next week.

The rising death toll has placed pressure on Congress from a section of the electorate that views inaction on the issue of access to semi-automatic rifles and other equipment commonly used in mass shootings as part of the problem.

But entrenched political divisions remain in the Senate, where Biden’s nominee to head the Bureau of Alcohol, Tobacco, Firearms and Explosives is facing organized opposition.

David Chipman, a former ATF agent and recently an adviser to gun control groups like Giffords, is being opposed by the National Rifle Association and gun rights supporters. Chipman has been an advocate for restrictions on weapons and other measures he says would curb deadly attacks.

But the outcome of a Senate vote on expanded background checks remains in doubt as Democrats would need a united caucus, or Republican support, to pass that legislation.

Sen. Joe Manchin, D-W.Va., a moderate, has said he opposes bills passed by the House that would expand background checks. And Sen. Krysten Sinema, D-Ariz., has yet to support the House legislation.

“This to me is something that is and should be nonpartisan,” said Cortez Masto, who noted that the expanded checks have been passed and approved by the Nevada Legislature.

“This is so important, and it’s something we should be doing at a federal level,” said Cortez Masto, a former Nevada attorney general.

Las Vegas was the location of the largest mass shooting in U.S. history, according to the FBI, on Oct. 1, 2017. Ultimately, 60 people died from injuries suffered by a lone gunman firing on an outdoor concern from the Mandalay Bay hotel.

The Trump administration, the NRA and Nevada Republican elected officials sought a reclassification by the ATF and Justice Department on “bump stocks,” accessories that accelerate the rate of fire of semi-automatic rifles that were used in the Las Vegas attack.

An ATF reclassification of the devices that restricted their sale was reversed by a 6th Circuit Court of Appeals this year as a violation of constitutional rights.

Meanwhile, Democratic lawmakers in the House and Senate, led by Rep. Dina Titus of Nevada and Sen. Bob Menendez of New Jersey and co-sponsored by Cortez Masto, have filed a bill to ban high-capacity ammunition magazines that have been used in recent mass shootings. But that legislation lacks Republican support.

Lowering flags, condolences and calls from firearm reform advocates for Congress to act continue with each mass shooting. Biden has called it an “American epidemic.”

But the response in Congress has been routine after each horrific tragedy. Democrats and gun control groups propose restrictions while Republicans and gun rights groups oppose bills that they claim would infringe on Second Amendment rights.

In the Las Vegas shooting, gunman Stephen Paddock, 64, of Mesquite, had nothing in his background that would have prevented him from purchasing the weapons he used to carry out the attack. He died from a self-inflicted gunshot wound at the scene.

Although the gun lobby opposes legislation on background checks, a ban on magazines and other weapons or devices, Sen. Chris Murphy, D-Conn., said bipartisan talks are ongoing that could result in legislation that could pass in the Senate.

Murphy has carried the torch on gun control since the tragic Sandy Hook Elementary School mass shooting in 2012 that left 26 dead, including 20 children between the ages of 6 and 7.

“There is conversation now going on, just like any piece of legislation I can’t give you any guarantee, but I know there’s bipartisan conversation going on,” Cortez Masto said.

(Background checks, however, have stopped hundreds of thousands of gun purchases by people prohibited from owning weapons. One Justice Department study of checks conducted from 1999 through 2015 noted between 126,000 to 226,000 firearms transfers were prevented in every year. That represented just 1.1 percent to 2.4 percent of all transfers in those years, the study noted.)

Gun lobby groups are prepared to fight legislative efforts to pass expanded background checks in the Senate, targeting moderate senators from both parties to block a bill in the evenly divided chamber.

The NRA also announced a $2 million campaign to block the Senate confirmation of Chipman, Biden’s nominee to head the ATF.

“Chipman is a gun control extremist,” the NRA said in a statement.

Funds would be spent in states like West Virginia and Pennsylvania, home states to moderate Democrat Manchin and GOP moderate Sen. Pat Toomey, who are in bipartisan talks about the ongoing gun control legislation.

In March, Toomey said he did not support the House-passed expanded background check bills. But he said it was open to compromise measures.

“I still support background checks on commercial sales and you know, we’re, we’re having preliminary conversations and I hope we can get something across the goal line but you know, it’s very difficult,” Toomey said.

Still, the gun debate will affect midterm elections that could decide control of the House and Senate. Gun rights are already being used in political campaigns.

Former professional wrestler Dan Rodimer, a Republican who lost a bid for Congress in Nevada last November, is now running for a Texas congressional seat. In an advertisement, Rodimer accused Democratic liberals of promoting communism and taking away citizens’ rights, like owning guns.

In the ad released by his campaign, Rodimer hoists an assault rifle, and footage of hog sniping from a helicopter is used to underscore his commitment to gun rights and a conservative agenda.