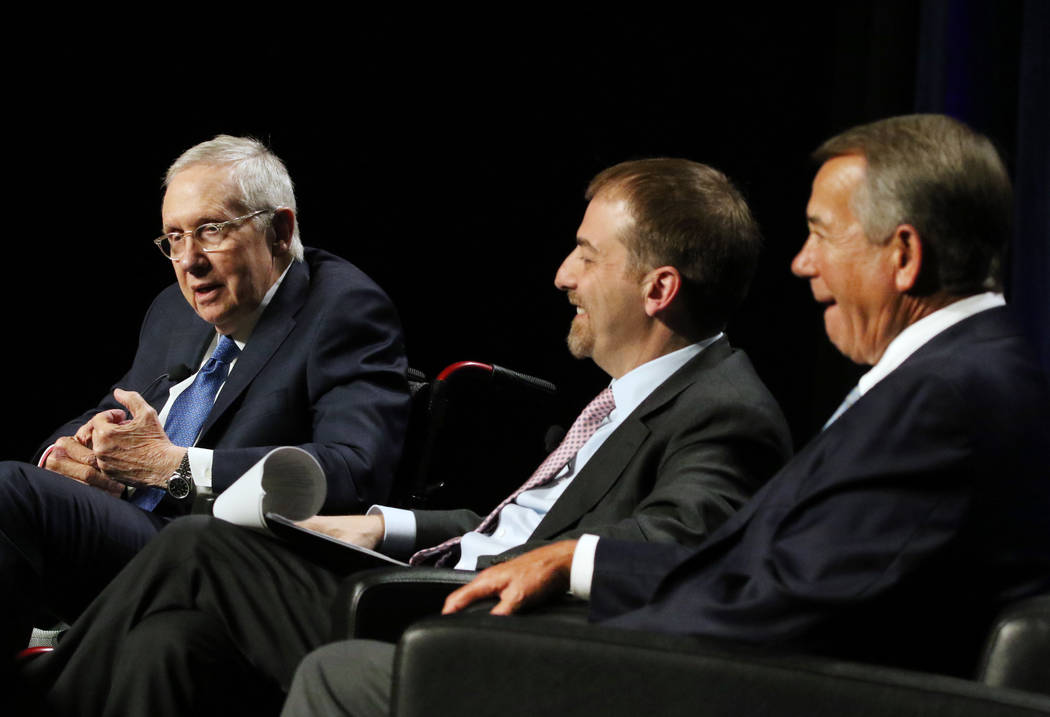 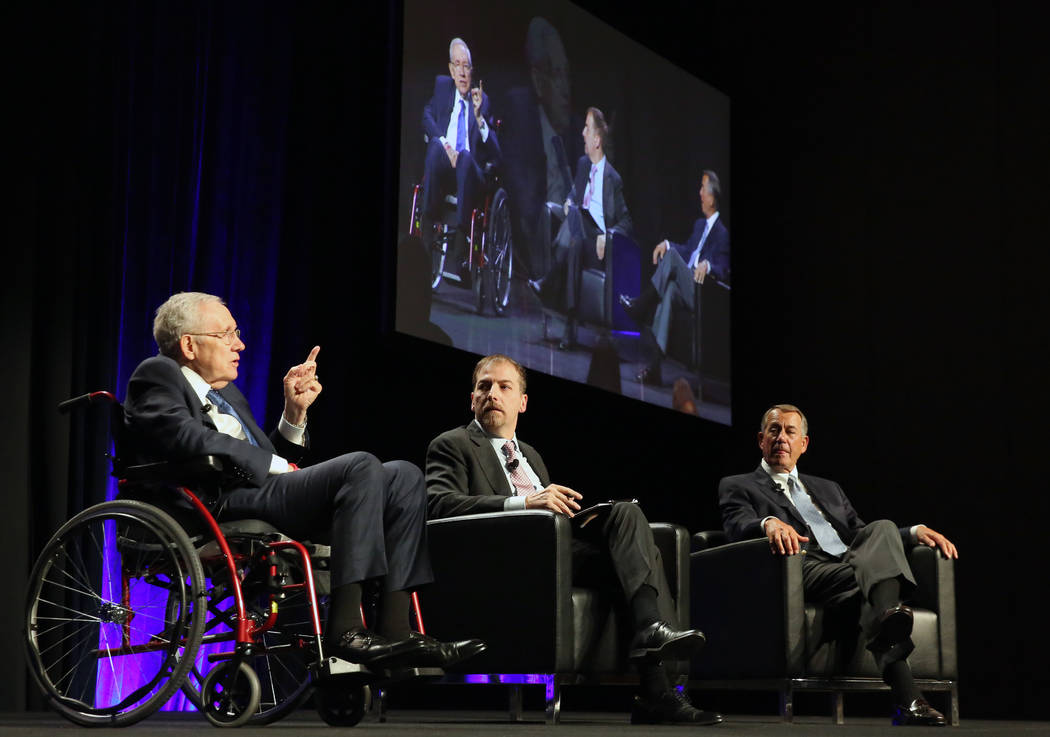 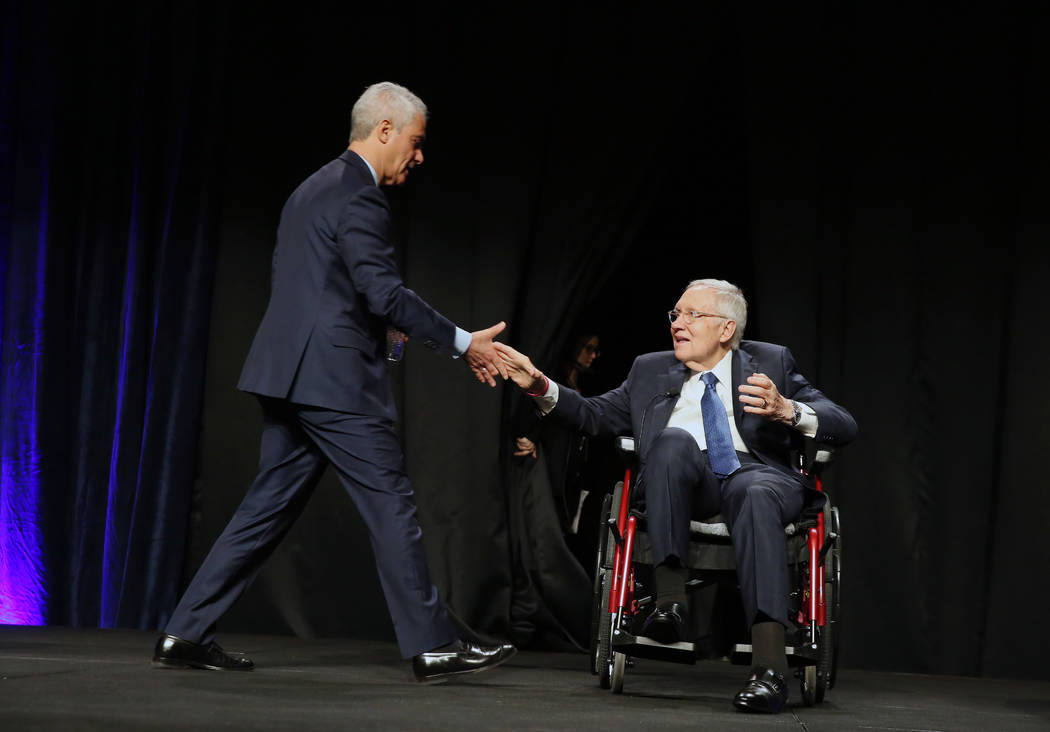 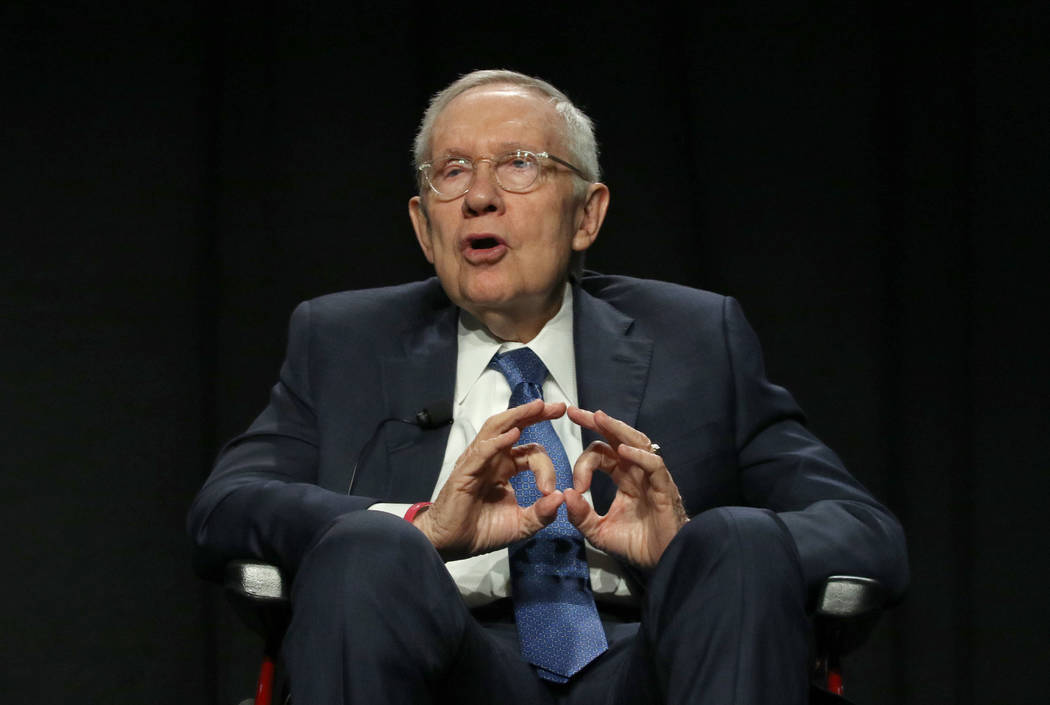 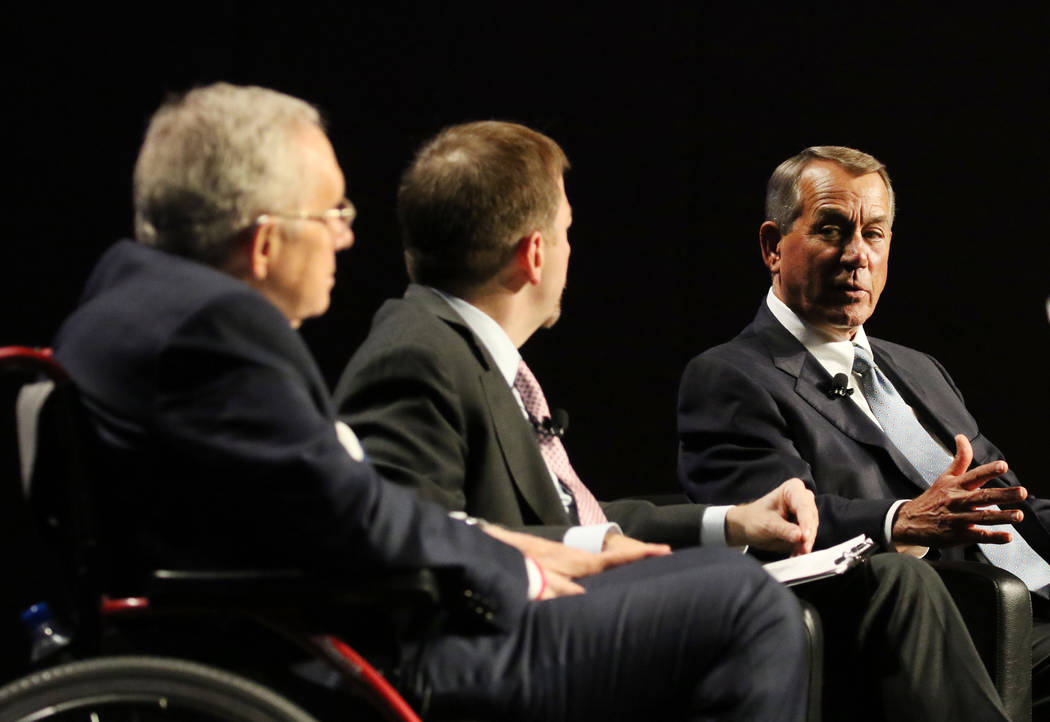 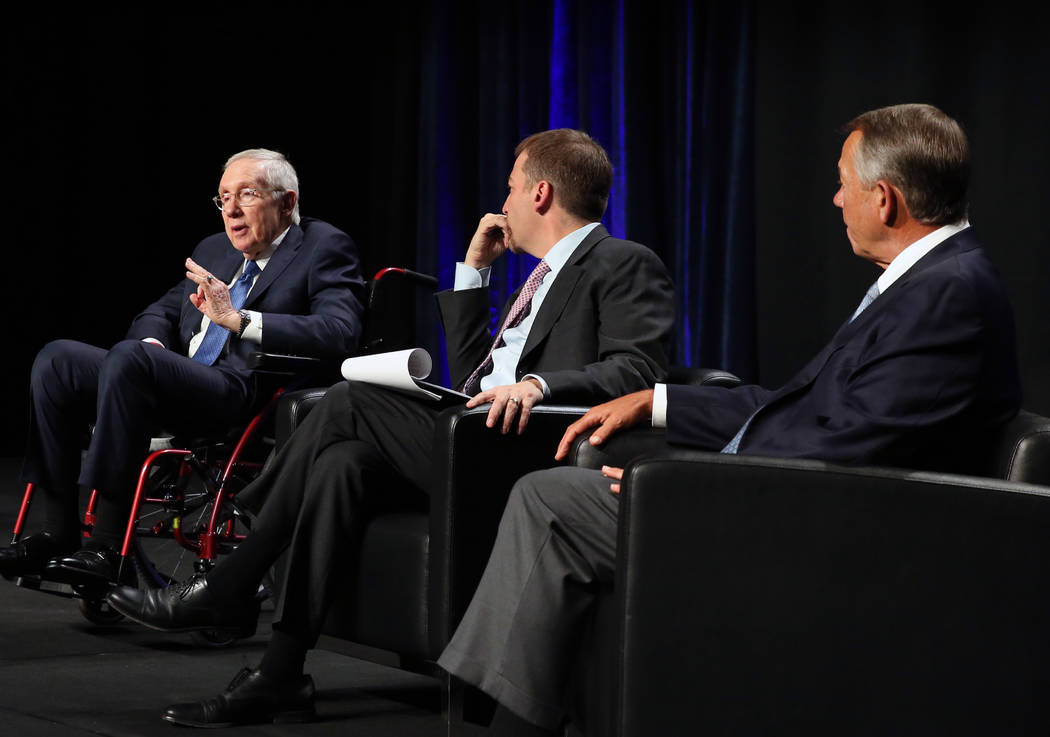 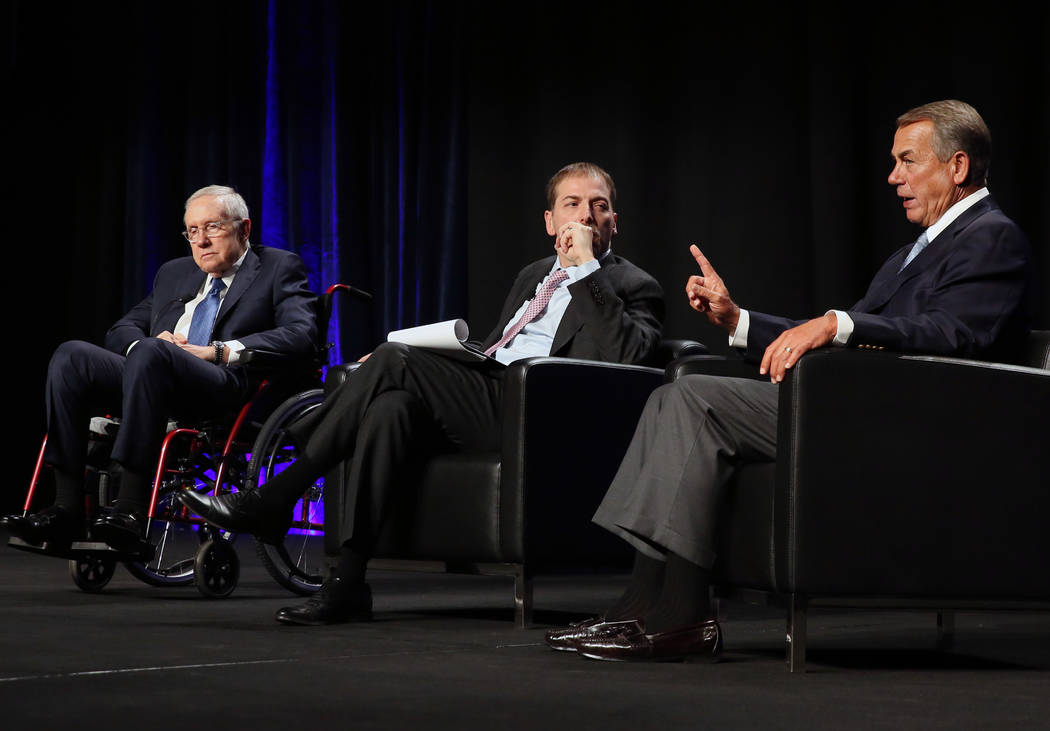 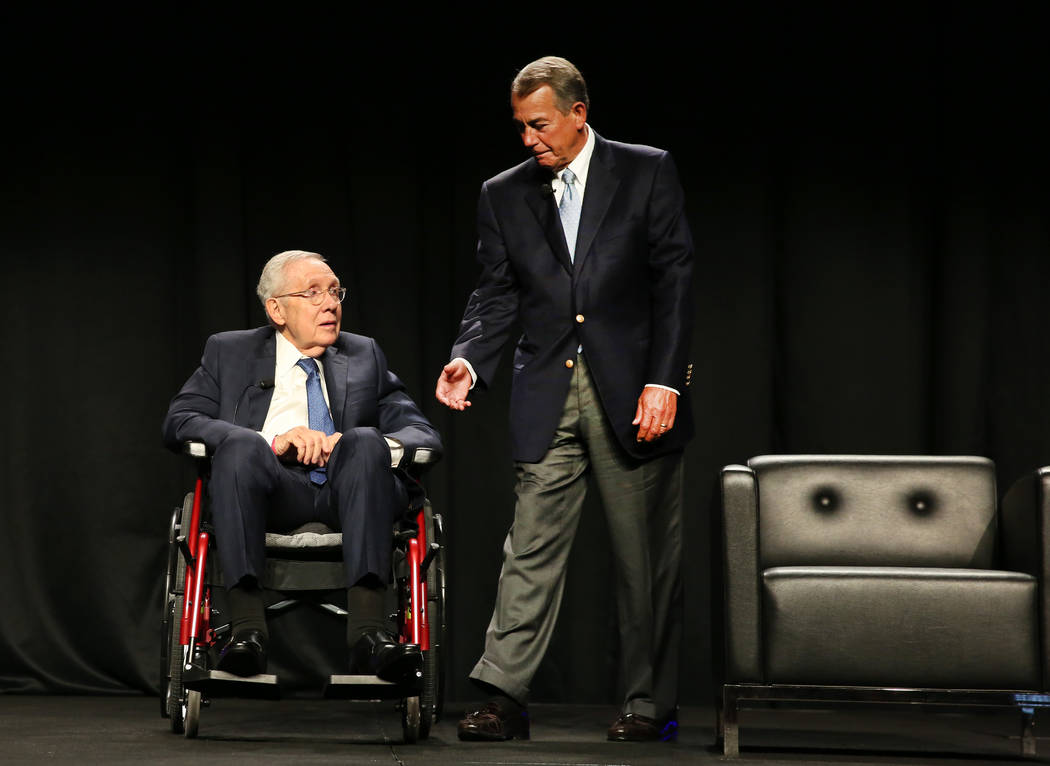 Former Speaker of the House John Boehner, right, extends his arm to shake hands with former U.S. Sen. Harry Reid prior to participating in an exclusive panel discussion as part of the inaugural symposium of the MGM Resorts Public Policy Institute at UNLV on Tuesday, April 23, 2019, in Las Vegas. (Bizuayehu Tesfaye Las Vegas Review-Journal) @bizutesfaye

Former Sen. Harry Reid on Tuesday called the possibility for impeachment proceedings against President Donald Trump “a difficult decision” that could potentially engulf the attention of Congress, although it has other important work to do.

Among those critical areas of need: Investing federal dollars back into education, revisiting Trump’s tax plan, addressing failing infrastructure and stopping a ballooning federal debt that Reid suggested had been relegated to the back burner.

In a brief but wide-ranging talk alongside former House Speaker John Boehner, a one-time Republican sparring partner, Reid lamented that the country’s drive into bankruptcy would hamper the ability of lawmakers to hone in on major issues.

The conversation in a Bellagio ballroom was presented by the MGM Resorts Public Policy Institute at UNLV, which Reid and Boehner co-chair. It came early into the institute’s first symposium, Investing in America: The Future of Work.

NBC “Meet the Press” host Chuck Todd moderated the roughly 25-minute discussion, which followed a keynote speech from outgoing Chicago Mayor Rahm Emanuel, who spoke about the city’s success in education reform and the role of the education gap behind income inequality.

Todd drew common ground between Emanuel, Boehner and Reid as straight-shooters: “You start to figure out the ones who are the blunt-talkers, the ones that tell it straight to you, even if it’s uncomfortable, they’re usually the one’s getting stuff done. They’re the doers.”

Boehner said simply “leaders are elected to lead,” although he explained the difficulties in the national political climate.

“Members reflect the views of their constituents and America is divided like this and it’s getting worse rather than better,” he said. “And frankly, the members listen to the loudest voices in their district – the Democrats who are left of the left, Republicans who are right of the right, and they’re holding members of Congress hostage to their loud views.”

Even in a ratcheted era of divisiveness in Washington, however, Reid rejected as “an excuse” the idea that political turmoil would curtail progress.

“I do not accept the fact that things are too much in turmoil that we can’t get things done,” he said.

Boehner echoed the sentiment, reflecting on the urging from colleagues during his time as House speaker that he not work with President Barack Obama or Reid.

“They thought Harry was the devil,” he said. “I knew better.”

Todd had prompted the two to imagine inserting themselves into congressional leadership today, where many Democrats refuse to work with Trump under any circumstances.

“Well, we have many Republicans who don’t want to either, but they’re just being … more quiet about it,” Reid quipped.

Education, workforce at the fore

UNLV President Marta Meana told audience members that the public policy institute was focused on researching, testing and advancing new models of workforce development, and the approach “makes it one of the most unique … in the country.”

“There is a lot of anxiety in America, especially when it comes to jobs,” Boehner said. “I think the best way to lower that anxiety is to have a more adaptable workforce.”

The foundation for that, he added, should be bolstering American education by starting more children in school earlier and relying on a community component — the YMCAs and Boys and Girls Clubs — that promote and deliver educational activities.

Reid said that teachers need to be more involved in decisions and the federal government must increase assistance to states with funding. Asked by Todd what happened to momentum years ago for mandated community college, Reid pointed to the invasion of Iraq, “the worst failed policy decision in the history of the country” as diverting attention from the issue at home. 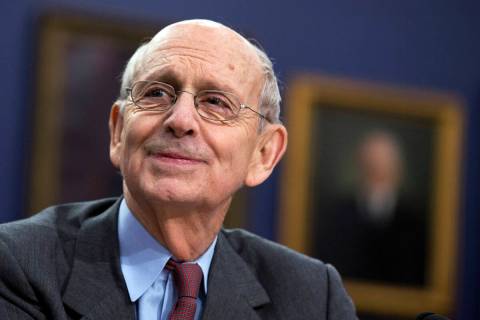 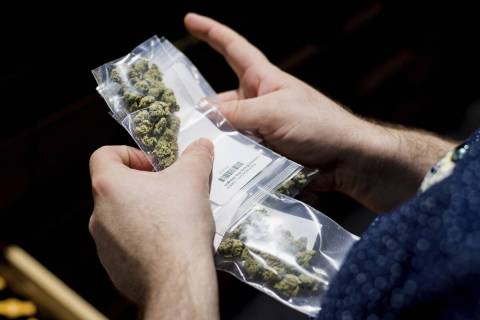 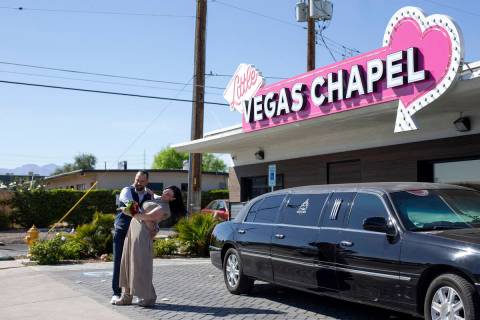 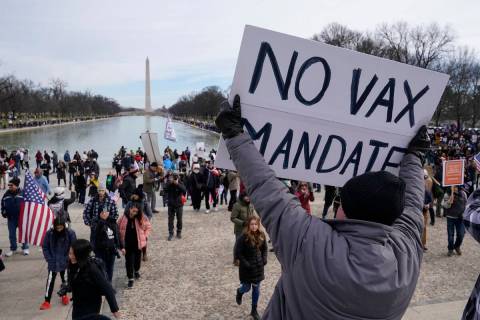 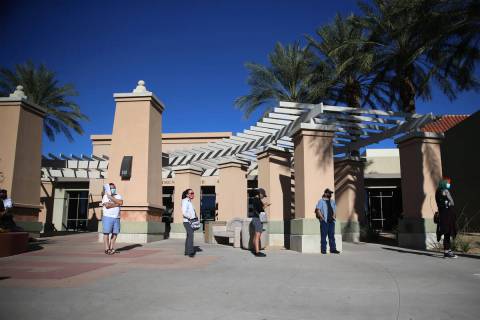