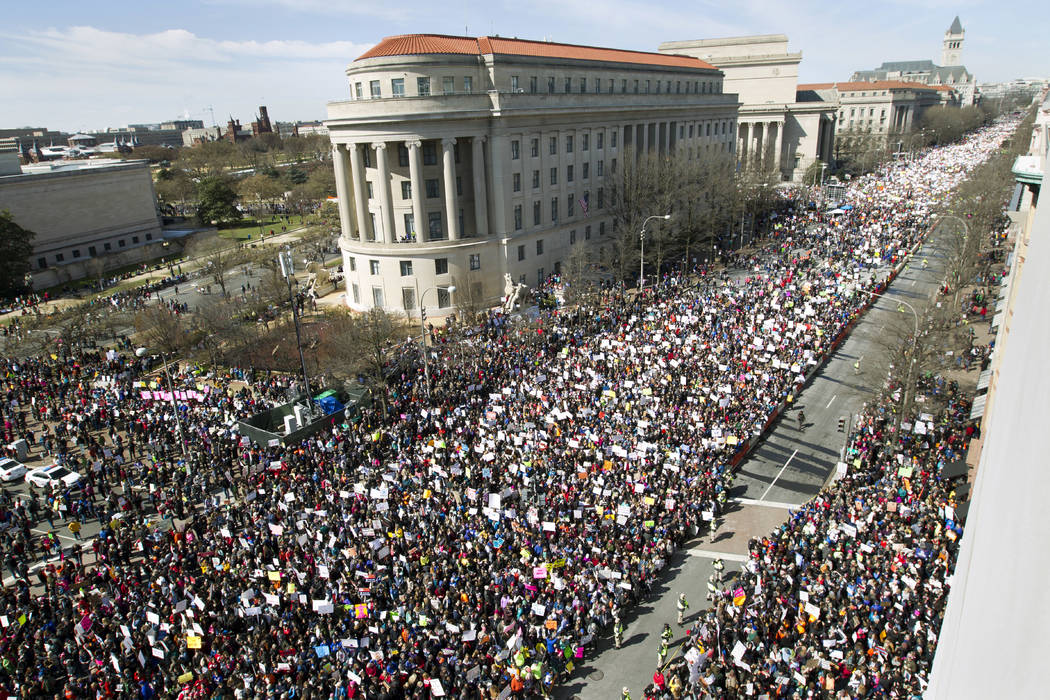 As seen from the Newseum, people fill Pennsylvania Avenue during the "March for Our Lives" rally in support of gun control in Washington, Saturday, March 24, 2018. (AP Photo/Jose Luis Magana) 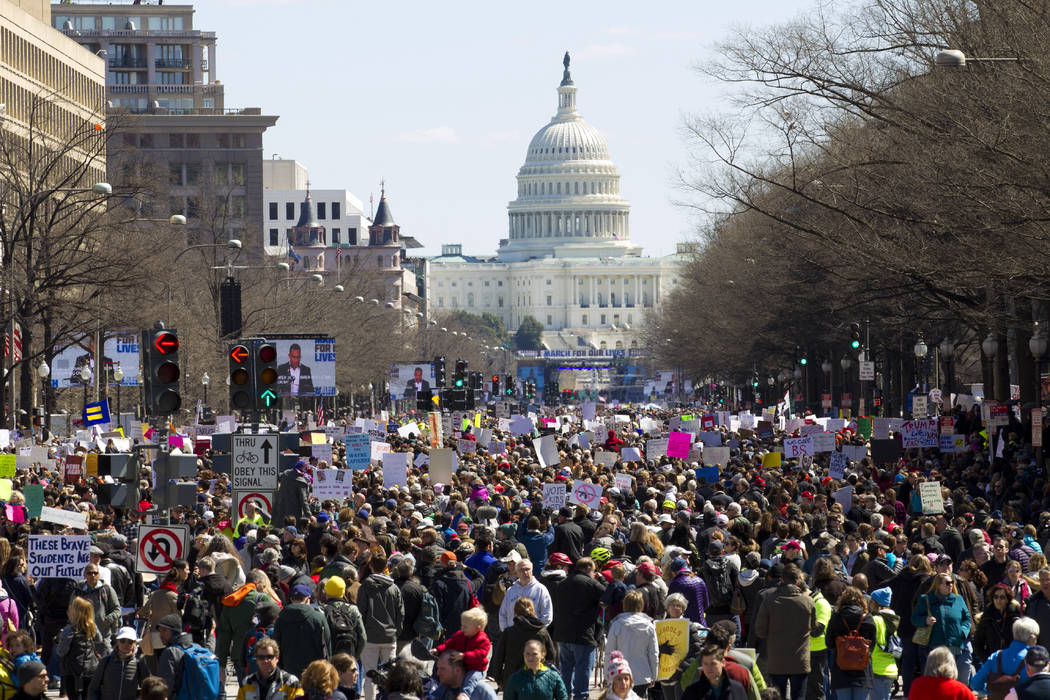 Protesters stand Pennsylvania Avenue looking east toward the stage located near the Capitol during the "March for Our Lives" rally in support of gun control in Washington, Saturday, March 24, 2018. (AP Photo/Jose Luis Magana) 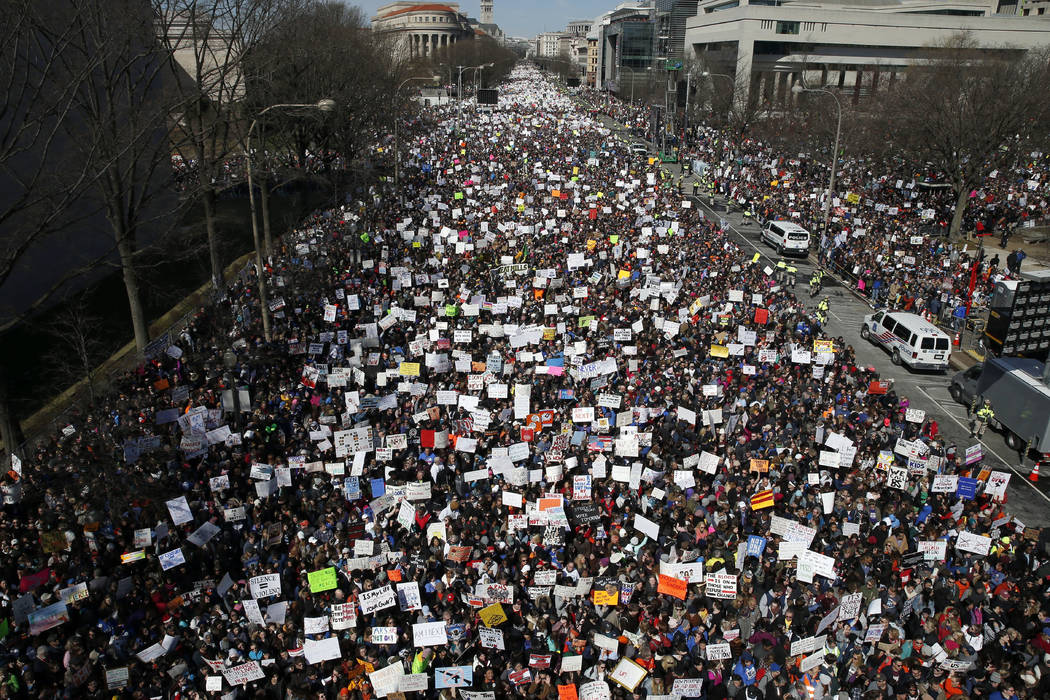 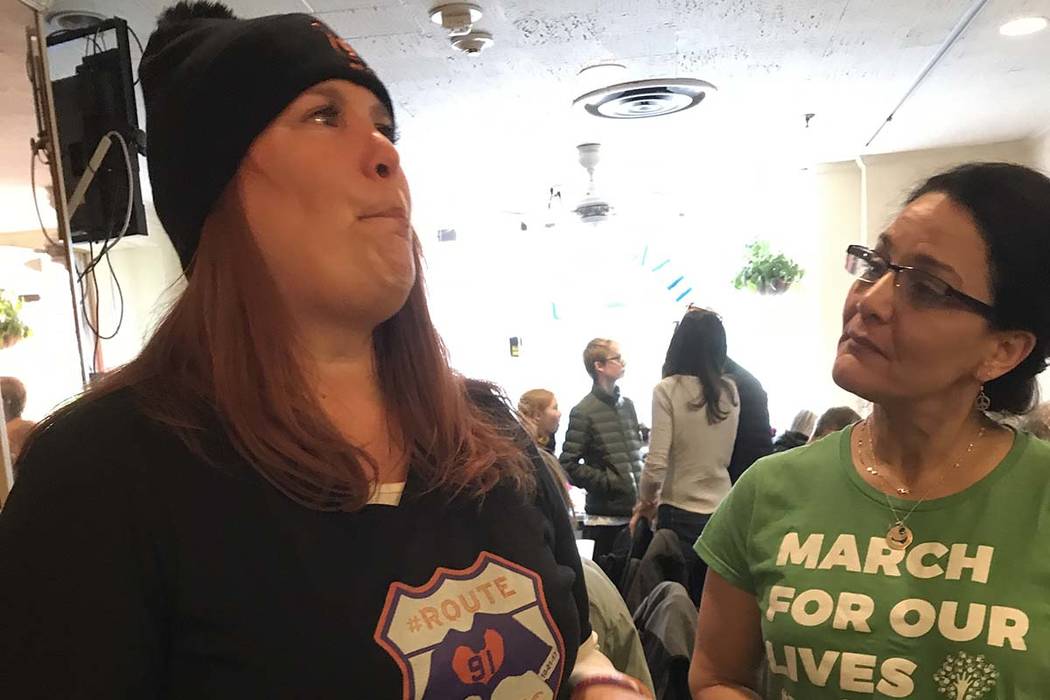 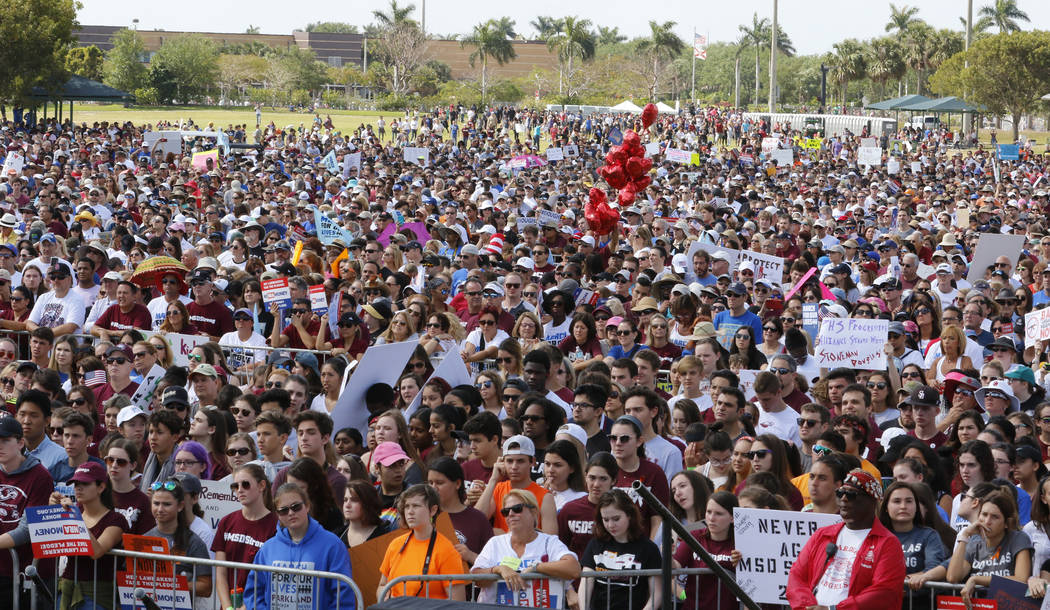 Participants listen to speakers before taking part in the "March For Our Lives" rally Saturday, March 24, 2018, in Parkland, Fla. Thousands of people filled the park near Marjory Stoneman Douglas High School for the rally near the site of last month's school massacre in Parkland. (AP Photo/Joe Skipper) 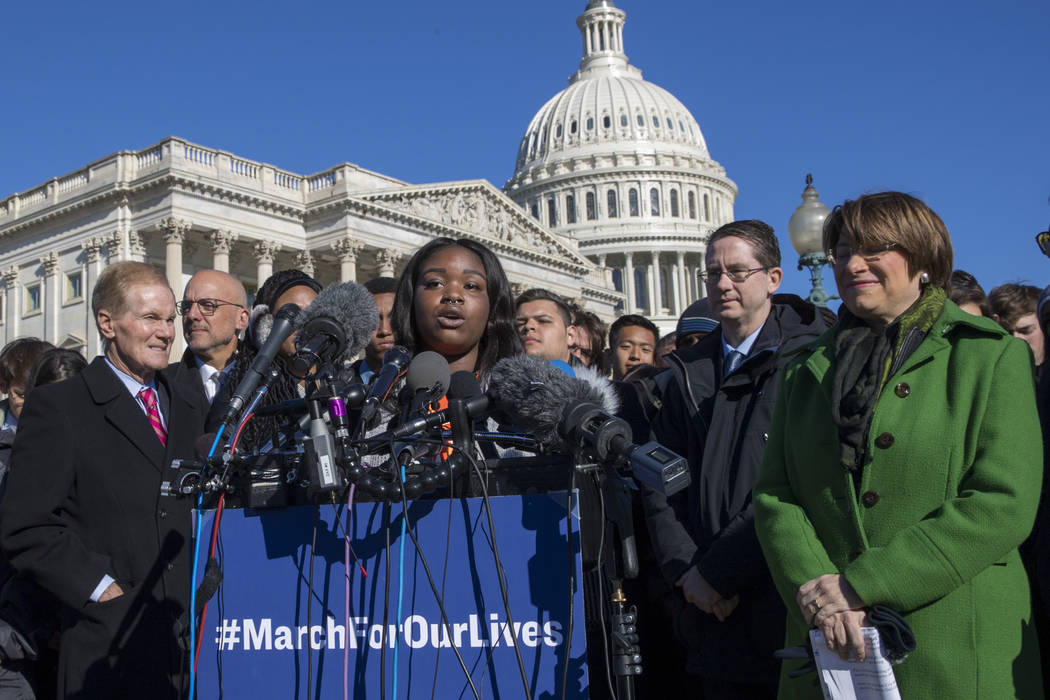 Antiqua Flint, a student at Minneapolis South High School, flanked at left by Sen. Bill Nelson, D-Fla., and Rep. Ted Deutch, D-Fla., and Sen. Amy Klobuchar, D-Minn., far right, joins lawmakers and student activists at the U.S. Capitol in Washington, Friday, March 23, 2018, a day before the March for Our Lives rally in the wake of the shooting at Marjory Stoneman Douglas High School in Parkland, Fla. (AP Photo/J. Scott Applewhite) 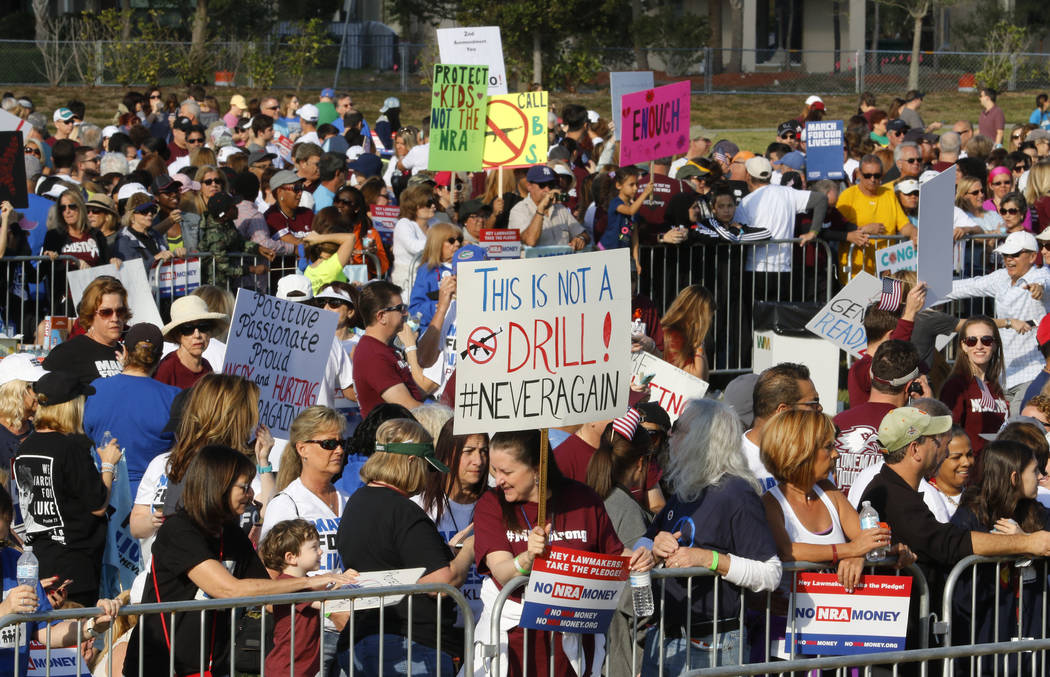 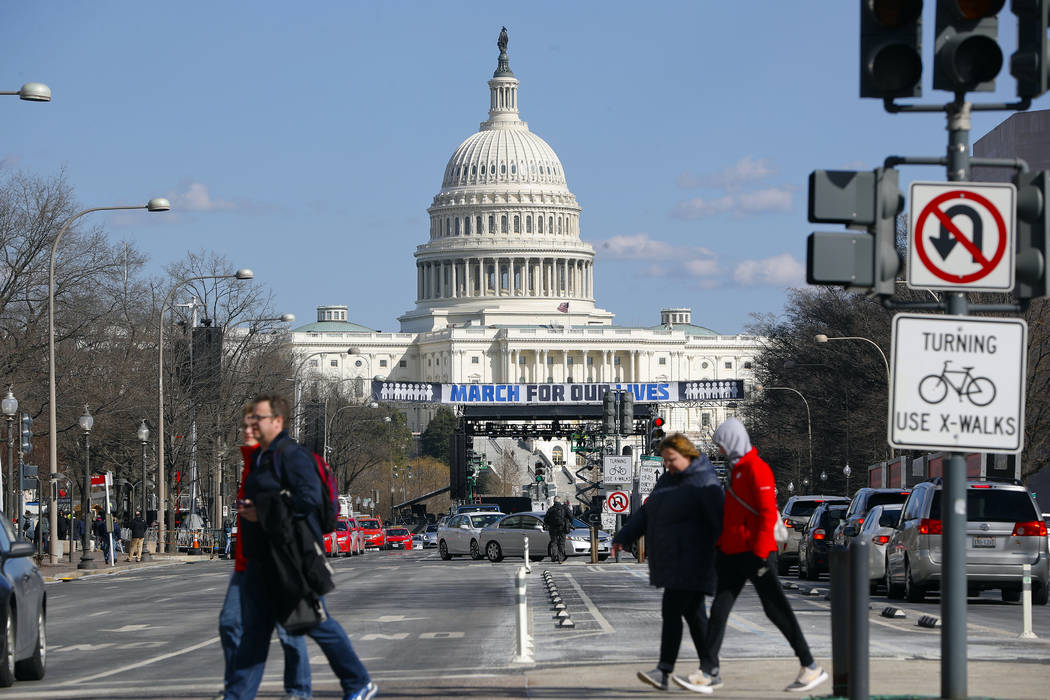 The stage area is set up on Pennsylvania Avenue near the U.S. Capitol in Washington, Friday, March 23, 2018, a day before the "March for Our Lives" rally in support of gun control. (AP Photo/Pablo Martinez Monsivais) 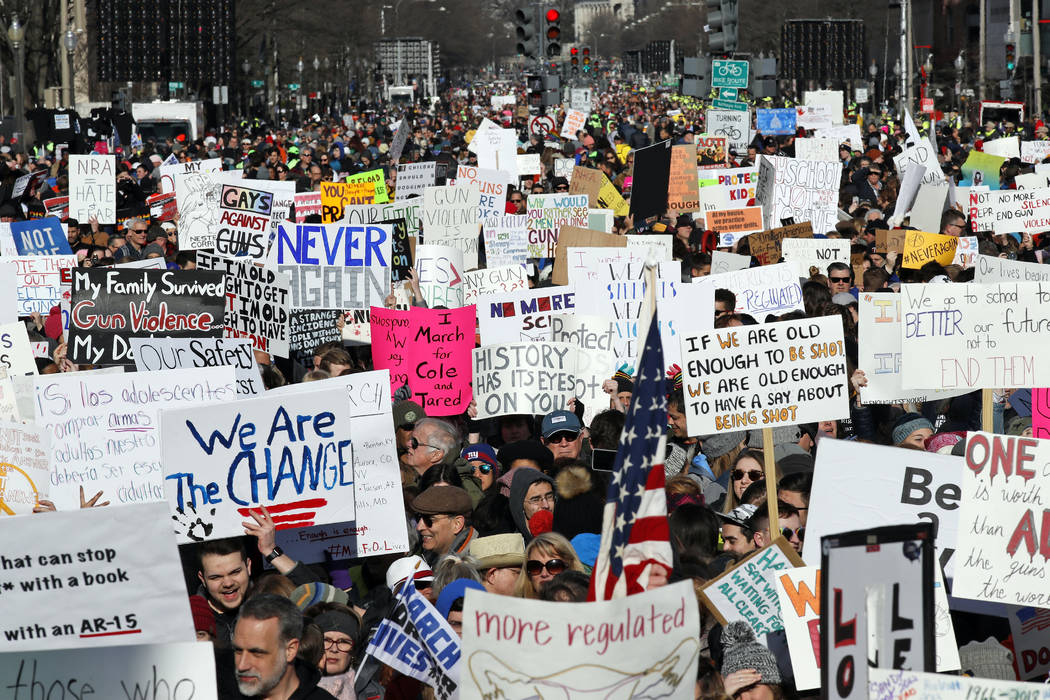 Crowds of people hold signs on Pennsylvania Avenue at the "March for Our Lives" rally in support of gun control, Saturday, March 24, 2018, in Washington. (AP Photo/Alex Brandon) 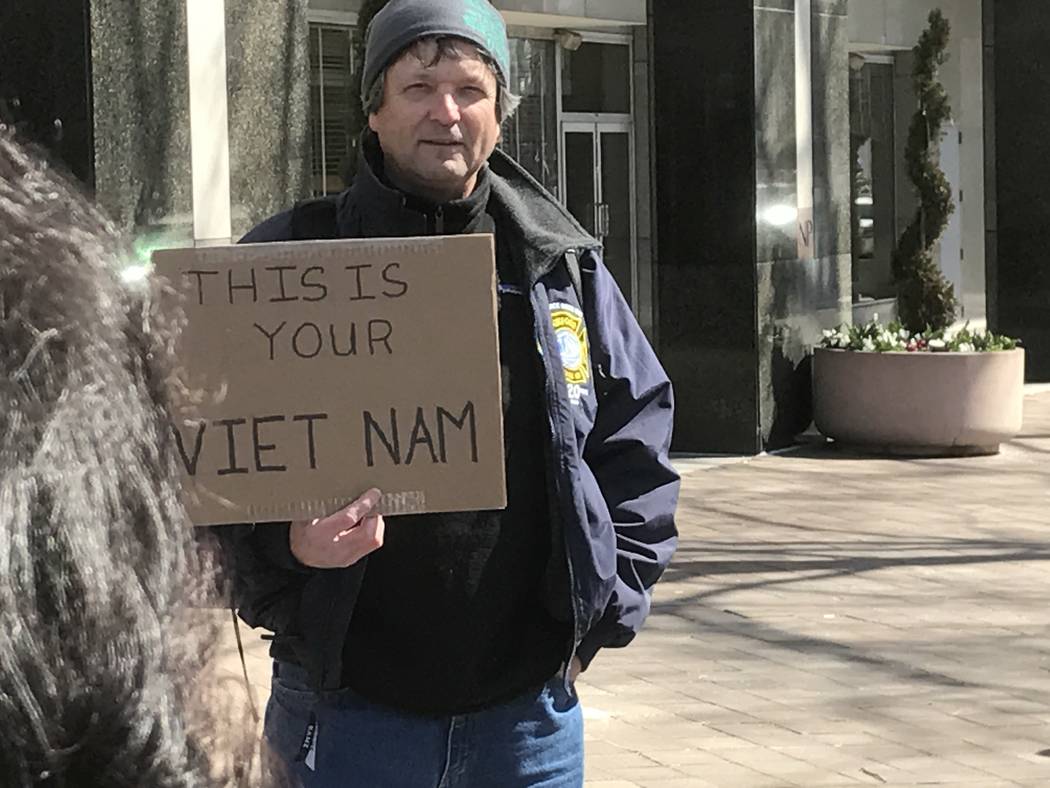 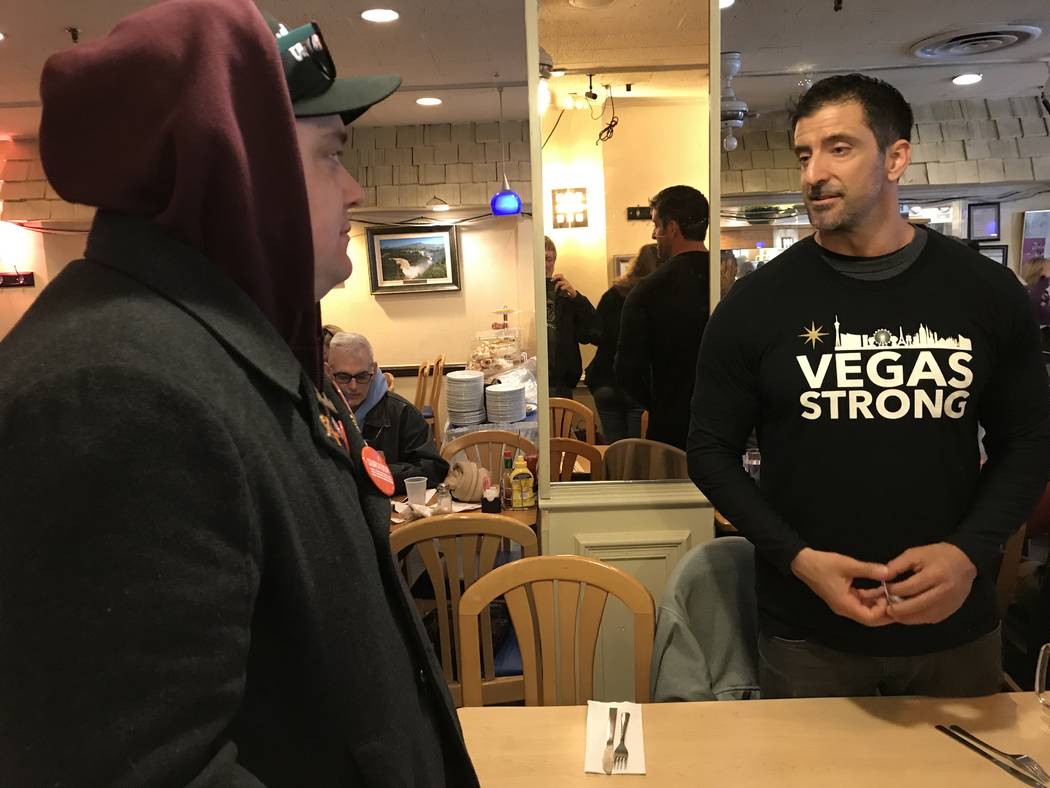 David Maynard, a bartender at Route 91 Harvest Festival, meets with other mass shooting survivors before the March For Our Lives. Gary Martin Las Vegas Review-Journal @garymartindc 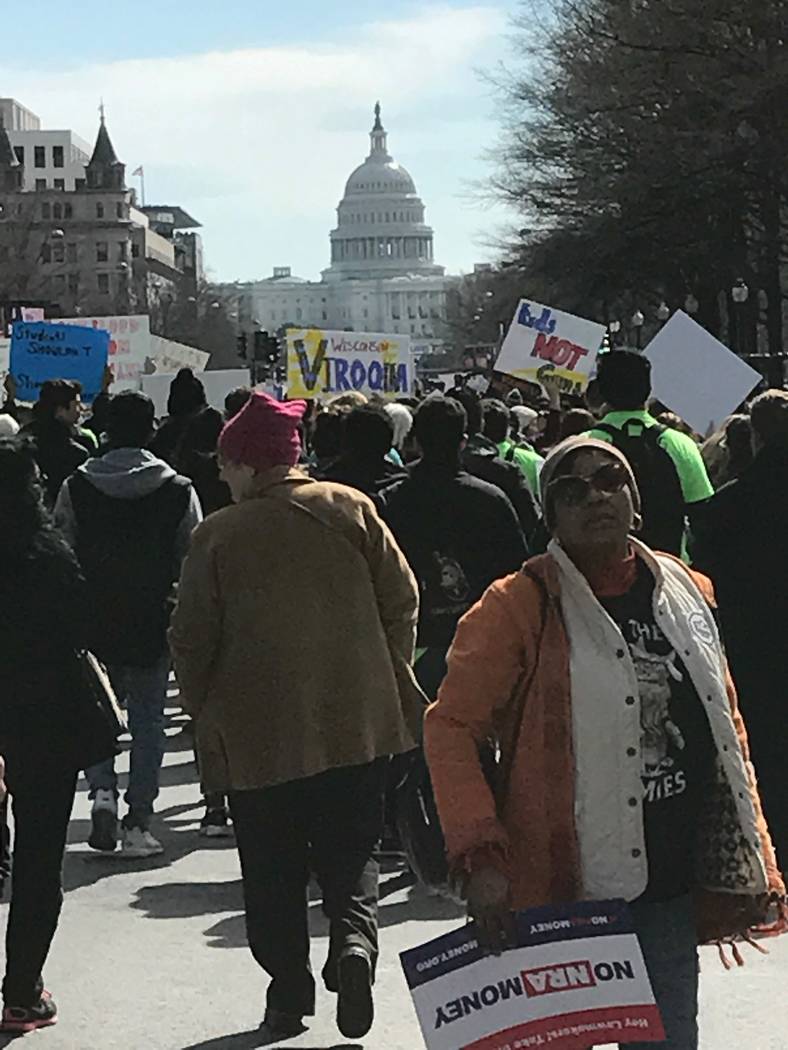 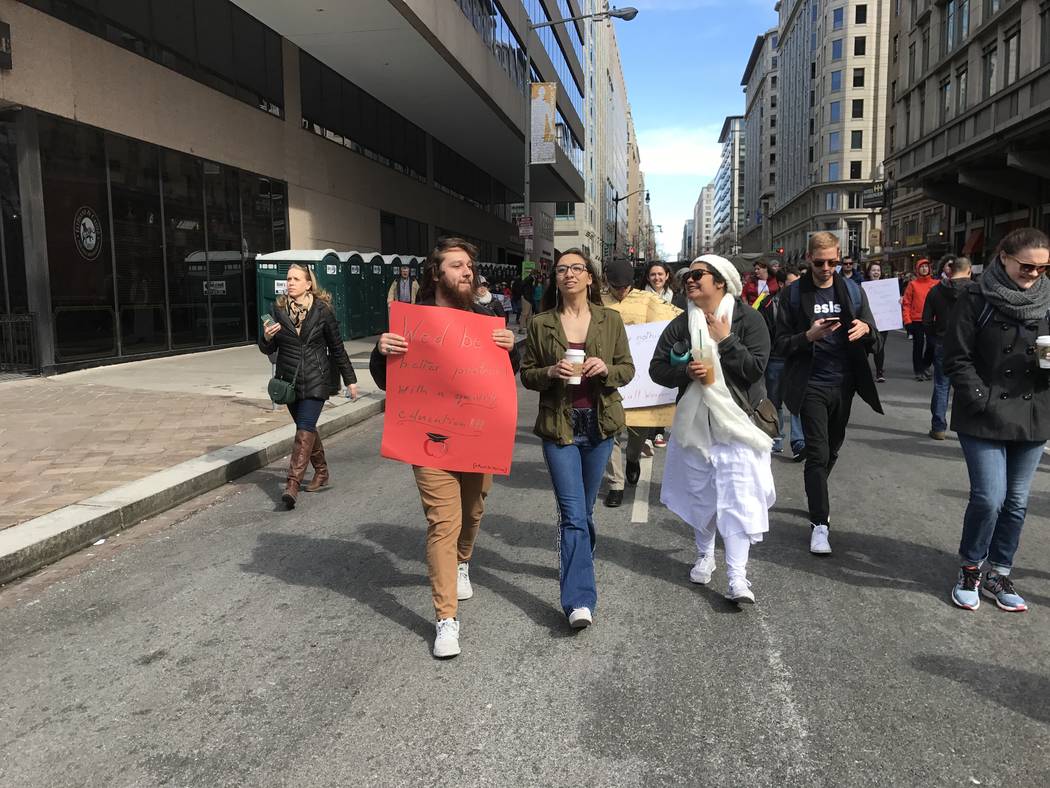 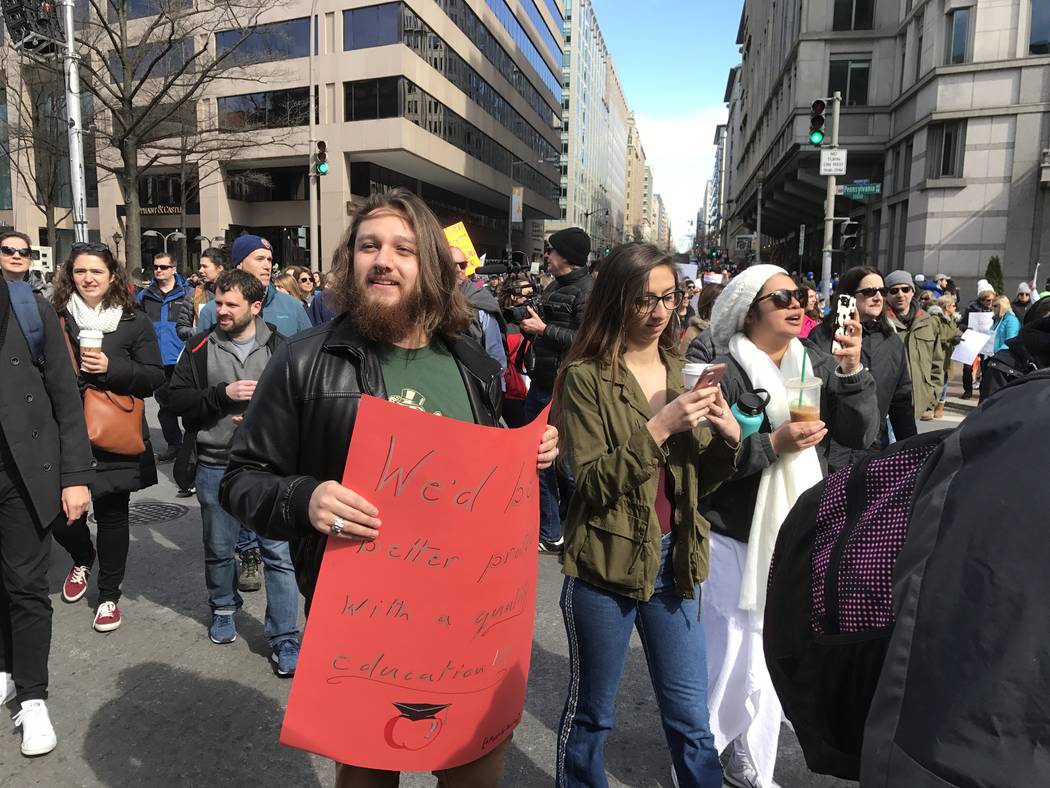 WASHINGTON — An American youth movement put its foot down Saturday during a march on the nation’s capital to demand an end to gun violence and gun control measures to prevent school shootings.

The message of the March for Our Lives was aimed at Congress, which has ducked tougher measures that gun control advocate groups want.

“Stand with us or beware, the voters are coming,” Cameron Kasky, 17, a survivor of the Feb.14 school shooting in Parkland, Florida, told the crowd to rousing applause.

The March for Our Lives want a ban assault weapons, high-capacity ammunition magazines and increased background checks on gun buyers.

Hundreds of thousands of students, parents and supporters thronged Pennsylvania Avenue in a rally that evoked the civil rights and anti-war demonstrations of the 1960s.

Heather Gooze, 43, a Route 91 Harvest Festival in Las Vegas bartender who survived the shooting and testified before the Senate on the need to ban bump stocks, said she came to the Washington march to honor the victims of the Las Vegas shooting.

“We are not going to stop now. This is our mission,” Gooze said. “Washington is going to have to hear us.”

Las Vegas marchers Cecelia Gonzalez, 26, Caitlyn Caruso, 21, and David Lopez-Wade, 21, waded through the massive crowd that stretched from the Capitol to near the White House.

“I’m already overjoyed to see so many people on the streets,” said Caruso, an activist concerned about Clark County School District moves to arm educators and personnel.

Lopez-Wade carried a placard that stated: “We would be better protected with a quality education.”

Gonzalez said students at UNLV are worried about school shooting.

“It could happen to us,” Gonzalez said, “especially students of color.”

The march included speeches from the survivors of school shootings. None of the speakers was older than 18.

Among the speakers was Marjory Stoneman Douglas High School senior Emma Gonzalez, who delivered an impassioned speech that included a period of silence representing the more than six-minute length of the shooting at her school.

Musical entertainment included Miley Cyrus, Ariana Grande, who performed at Britain’s Manchester Arena, the site of a terrorist attack, and Jennifer Hudson, who performed “The Times They Are A-Changin’” to close the event.

Survivors of the Parkland shooting and others affected by gun violence joined the singer onstage, helping Hudson lead the crowd in a chant for change.

“It’s a lot of emotion,” said Dave Maynard, 42, who was tending bar at the Route 91 Harvest Festival when gunfire broke out in Las Vegas.

The Las Vegas Strip shooting left 58 people dead and more than 700 injured. The shooter died of a self-inflicted gunshot wound after the 10-minute shooting spree.

Maynard said he has seen other survivors struggling. “I wanted to keep going, it’s a born-again kind of feeling.”

“I wanted to do something with that,” Maynard said, explaining his decision to attend the march.

Gooze also attended the breakfast, and spoke with survivors from the Pulse Nightclub shooting in Orlando.

She said the campaign against gun violence is not “trying to take anyone’s gun away.”

“If you are a legitimate gun owner, you should be behind these campaigns against gun violence so you can protect your rights,” Gooze said.

The NRA opposed raising the age limit to 21 for purchasing assault rifles after the Florida school shooting, a position backed by President Donald Trump but one the Republican-controlled Congress has yet to take up.

Legislation to ban bump stocks, devices to increase the rate of fire of semi-automatic rifles to mimic that of fully automatic weapons, also is opposed by the NRA.

The Justice Department announced its intention Friday to ban bump stocks, which were used in the Las Vegas shooting, following a public-comment period.

Gun control advocates want Congress to pass a law that would permanently ban the devices.

‘This is Your Vietnam’

Meanwhile, the size of the march and the participation of youth drew comparisons to demonstrations for social change that were held in the 1960s.

At a street corner at 14th and Pennsylvania Avenue, Chris Koch, 62, a first responder from Easton, Maryland, held a sign encouraging the crowd: “This is Your Vietnam.”

“It’s another issue that has gelled a generation,” Koch said. “It was youth turning out in the streets that stopped the Vietnam war.”

The size of the march was anticipated by the D.C. government, which closed roads surrounding the National Mall and Pennsylvania Avenue.

Jumbotrons were installed along the route, and portable toilets lined side streets.

The event was funded by celebrities, including Oprah Winfrey, Steven Spielberg, and George and Amal Clooney.

Assisting in the organization of the march and sibling events is Everytown for Gun Safety and Giffords Courage, groups that advocate for gun control measures.