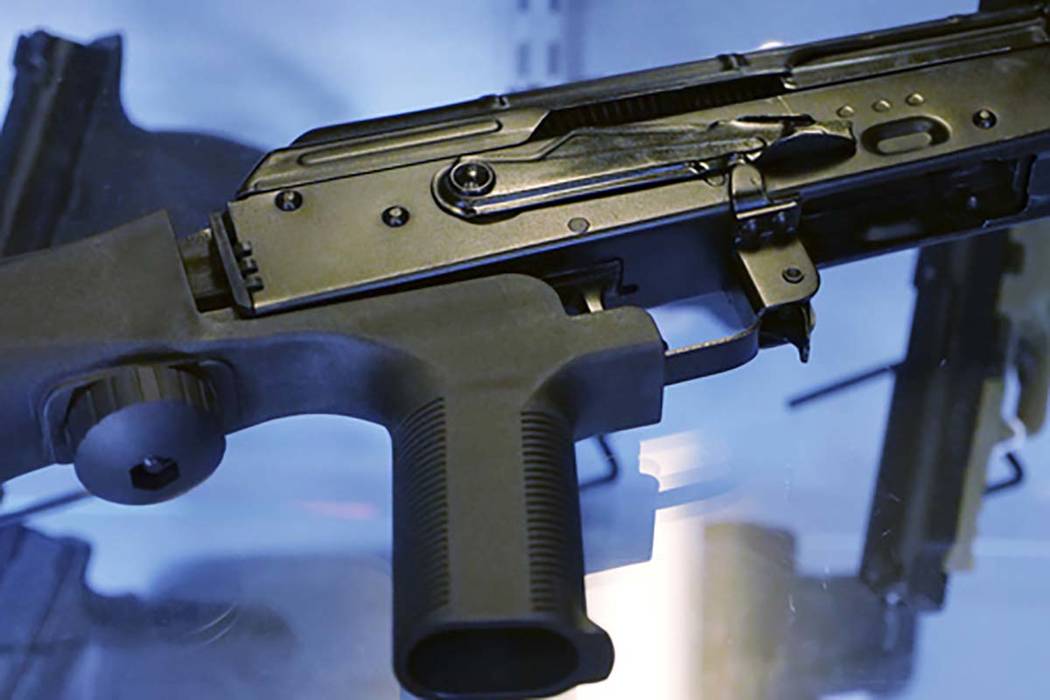 A device called a "bump stock" is attached to a semi-automatic rifle at a gun store and shooting range in Utah on Oct. 4, 2017. (Rick Bowmer/AP, File)

WASHINGTON — Days before the one-year anniversary of the Oct. 1 mass shooting, the Department of Justice is proposing to ban bump stocks, a device used by the Las Vegas gunman to accelerate the rate of fire of semi-automatic rifles, the Review-Journal has learned.

In February, President Donald Trump directed his administration to review bump stock regulations in the wake of the Las Vegas shooting that left 58 people dead and another mass shooting at a high school in Parkland, Florida. He directed Attorney General Jeff Sessions to produce “a rule banning all devices that turn legal weapons into machine-guns.”

In late March, the Justice Department published a proposed regulation in the Federal Register and sought public comment. White House Press Secretary Sarah Sanders said Friday that the regulation has been sent to the Office of Management and Budget for review — the final step before it takes effect.

Neither the OMB or Justice would confirm Friday that the measure was under review.

In a statement, informing the Review-Journal of the Department of Justice action, Sanders recognized the slow pace involved in changing the law.

“One of the president’s greatest frustrations is the pace of executive-branch especially on regulatory work,” Sanders stated. “As you know, it is normal for significant regulations to take this long or longer, particularly where (as is the case here) the government is regulating in a new space.”

When Trump made it known he would look to change gun regulations administratively, gun control advocates charged that the president had chosen the slow and less sure road to banning the devices. Administrative changes require the government to gather and process public comments while Congress can pass a bill without a comment period.

David Chipman, a former ATF agent, who now advises the anti-gun-violence organization Giffords, called the Trump move “a significant step,” even as he dismissed the decision to change the law administratively as “a delay tactic.”

Sen. Dean Heller, R-Nev., applauded the Justice Department “for working to overturn this Obama-era regulation” – a reference to a 2010 ATF ruling that found bump stocks were not subject to firearms legislation.

“I’m pleased with this recent progress and I am hopeful that a final rule will be issued as soon as possible,” Heller said in a statement. “While it is impossible to eradicate pure evil from this world, this step is yet another way we are working to keep our communities safe here in Nevada.”

But Rep. Dina Titus, D-Nev.,said, “If this administration was serious about taking meaningful action on gun violence,” Trump would rally Republican leaders “to consider my bill and the dozens of other pieces of legislation my colleagues and I have put forward to address this national scourge.”

Titus is co-sponsor of the Closing the Bump Stock Loophole Act, which has bipartisan support. The bill would allow the ATF to ban bump stocks and any other device that significantly accelerates the rate of fire of a semiautomatic weapon. Her bill has not even had a hearing, she charged, thanks to the GOP leadership.

The largest manufacturer of bump stocks, Slide Fire Solutions shut down its online store in June and the company no longer takes orders for the devices.

“The ban is not going to stop criminal activity,” Pratt warned, “but it will allow a future anti-gun administration to easily expand these regulations to ban AR-15s and other semiautomatic firearms.”

According to The Trace, a “nonprofit newsroom” that reports on gun violence, 85 percent of the 32,000 comments the Bureau of Alcohol, Tobacco, Firearms and Explosives received on the proposed bump stock ban opposed more regulation.

A version of the proposed rule change published in the Federal Register noted that owners of legally purchased bump stocks “will be obligated to dispose of those devices.”

If bump-stock owners keep the devices, Pratt warned, they could be “treated as owning an unregistered machine gun.”

Gun Owners of America plans to challenge the regulation in court. “We’ve already been planning for this eventuality,” Pratt said.

Sanders said the administration expected the challenge. “DOJ expects litigation over this regulatory action and has taken proactive steps to build a strong legal foundation for the regulation,” she said.