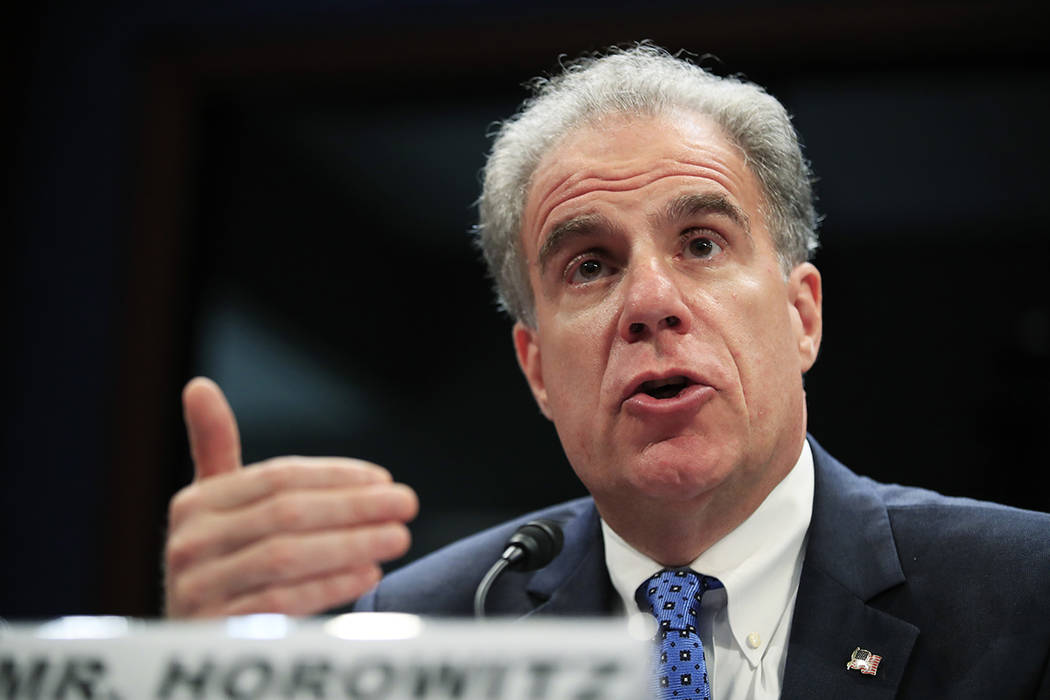 In this June 19, 2018, file photo, Department of Justice Inspector General Michael Horowitz testifies before a joint House Committee on the Judiciary and House Committee on Oversight and Government Reform hearing on Capitol Hill in Washington. (AP Photo/Manuel Balce Ceneta, File)

WASHINGTON — President Donald Trump had hoped that Justice Department Inspector General Michael Horowitz’s report on the genesis of the FBI’s investigation into Russian interference in the 2016 election would establish partisan bad faith and even criminality.

But Monday’s release of the 476-page report poured cold water on conservatives’ dreams that the top figures behind the Russian investigation might actually face prison. The review found “no documentary or testimonial evidence that political bias or improper motivations influenced the FBI’s initial decision” to investigate allegations of coordination between the Kremlin and Trump’s campaign.

A representative of a friendly foreign government, believed to be Australia, told U.S. officials that Trump campaign foreign policy advisor George Papadopoulos had suggested the Trump team received dirt on 2016 rival Hillary Clinton from Russia – and that incident met the “low threshold” needed to start an investigation.

Horowitz did not exonerate the FBI, however. The report did catalogue a host of errors, omissions and bad judgments that allowed the bureau to pursue the probe that never produced evidence of wrongdoing that critics predicted.

Repeatedly federal law enforcement officials dropped the ball and misrepresented the facts as they relied on unsubstantiated charges spread by former British intelligence agent Christopher Steele, who wrote a “dossier” while on the payroll of the Clinton campaign and DNC.

“Well, they fabricated evidence and they lied to the courts and they did all sorts of things to have it go their way,” Trump concluded as he talked to reporters Monday. “And this was something we can never allow to happen again.”

“The DOJ inspector general’s report makes clear that the predicate for the FBI’s investigation was valid and without political bias,” Senate Minority Leader Chuck Schumer said in a statement. “This report reiterates the conclusions of the intelligence community that Russian President (Vladimir) Putin directed his intelligence services to interfere in the 2016 elections in favor of Donald Trump.

Staunch Trump ally Rep. John Ratcliffe, R-Texas, told Fox News that he agreed with most of the facts in the report and that the FBI had met the “low threshold” needed to launch an investigation which could have serious national security implications.

But “everything after that is an indictment of the process,” as everything that came after the initial intelligence in the report “was exculpatory.”

Horowitz’s office examined one million documents and conducted 170 interviews of more than 100 witnesses.

And like the Russian probe that led to the conviction of a number of Trump associates on charges unrelated to the 2016 campaign, the investigation uncovered dirt on federal officials unused to the harsh spotlight.

In the course of examining the FBI investigation, the inspector general discovered the text messages sent between FBI Section Chief Peter Strzok and FBI attorney Lisa Page, who were carrying on an affair and who shared a deep animus toward Trump.

But Horowitz concluded that Strzok was not the top decision maker who approved the probe and noted that FBI staff generally agreed that the prospect of Russian interference was so consequential that the the bureau had to pursue the case.

According to the New York Times, the inspector general did refer a low-level FBI lawyer, Kevin Clinesmith, to prosecutors for altering an email for a fourth Foreign Intelligence Surveillance Court warrant application for Carter Page.

According to the inspector general, Clinesmith — who is not named in the report — had inserted misinformation that wrongly suggested Page had not been a prior source for another government agency.

Former FBI Director James Comey – whose firing by Trump on May 29, 2017 led to the naming of Robert Mueller to serve as special counsel – wrote in the Washington Post: “Well, the wait is over, and those who smeared the FBI are due for an accounting. In particular, Attorney General William P. Barr owes the institution he leads, and the American people, an acknowledgment of the truth.”

For his part, Barr thanked Horowitz, but added in a statement, “The inspector general’s report now makes clear that the FBI launched an intrusive investigation of a U.S. presidential campaign on the thinnest of suspicions that, in my view, were insufficient to justify the steps taken. It is also clear that, from its inception, the evidence produced by the investigation was consistently exculpatory.”

U.S. Attorney John Durham, who is conducting a criminal investigation into the probe, released a statement in which he voiced respect for the inspector general.

As the report noted, two witnesses, Glenn Simpson, who hired Steele to do opposition research on Trump, and Jonathan Winer, a former State Department employee to whom Steele passed on his research, declined requests for interviews. (The inspector general does not have the power to subpoena witnesses.)

Horowitz also found that Department of Justice attorney Bruce Ohr “committed consequential errors in judgment” by failing to tell his supervisors that he had become Steele and Simpson’s go-between with the FBI and that he remained a conduit after the FBI ended Steele’s status as a confidential source. At the time, Ohr’s wife Nellie worked for Simpson’s firm, Fusion GPS.

In the report’s conclusion, Horowitz wrote that his office concluded that agents “did not give appropriate attention to facts that cut against probable cause, and that as the investigation progressed and more information tended to undermine or weaken the assertions in the FISA applications, the agents and (supervisory special agents) did not reassess the information supporting probable cause.”

Tom Fitton of the conservative gadlfy group Judicial Watch issued a statement accusing the inspector general of punting on “implicating senior official directly in the spy scandal” and called on Trump to name a special counsel.