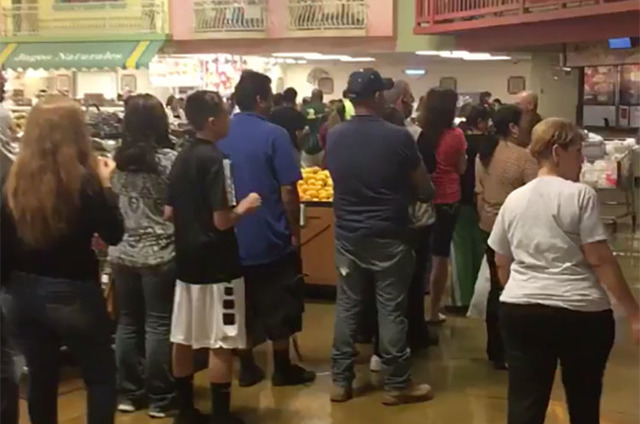 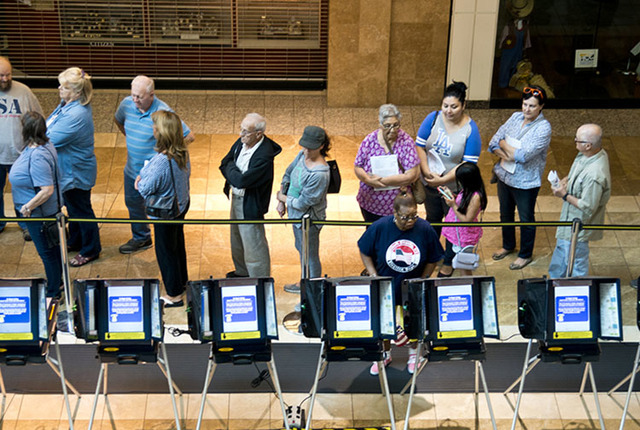 Voters stand in line to be among the first to vote in Nevada during early voting at the Galleria at Sunset in Henderson on Oct. 22, 2016. (Daniel Clark/Las Vegas Review-Journal)

More than 57,000 Clark County voters had cast ballots as of 10 p.m. Friday, the final day of early voting in Nevada.

That number would likely increase into the night, said Dan Kulin, a county spokesman.

“This is the largest single-day, early voting turnout that we’ve seen,” Kulin said. The previous record was set in 2012, when 48,095 voted on the final day of early voting in the county, according to Nevada Secretary of State records.

A handful of polling locations were scheduled to close at 7 p.m., and others were open until 8 p.m. or 9 p.m. depending on location. But closing time didn’t mean a voting cutoff — people still in line when polls closed “will still be able to vote,” Kulin said Friday, and as of 10 p.m. a handful of valley locations still had long lines.

“The last day of early voting is typically the busiest,” Kulin said.

Nowhere was that more evident late Friday than at the polling site within the Cardenas Market on the southeast corner of Bonanza Road and Lamb Boulevard. The site, slated to close at 9 p.m., remained open long after that time to accommodate the many voters still waiting to cast their ballots.

Stephanie De La Cruz, a 22-year-old nursing student at Nevada State College, said she came out to vote “because of the laws that are getting passed in Nevada, specifically roads and the legalization of marijuana.

“I wanted to make sure my vote counted. I couldn’t vote Tuesday. I didn’t vote sooner because I wanted to review my ballot first,” she said.

She added, “A lot of people I’ve spoken with here are focused on passing comprehensive immigration reform, etc. They want to keep families together. They know that Hillary Clinton and I have been fighting for this and will continue to fight for this.”

Statewide numbers outside of the county won’t be available until late Friday or early Saturday morning.

About 685,000 Nevadans, or 47 percent of the state’s active registered voters, voted through the first 13 days of early voting this year in the state. In 2012, the raw number was 627,000 for the same period, but it accounted for 50 percent of that year’s active voters.

Thursday was another strong day for Democrats in Clark County. About 18,800 Democrats and 12,900 Republicans, as well as 10,200 third-party or independent voters, voted in the county.

That pushed the county Democrat vote lead to about 61,500.

Statewide, 59,500 Nevadans voted on Thursday, which was the highest turnout yet for the 2016 early voting period and was 12,500 higher than the second-to-last voting day in 2012.

An earlier version of this story included incorrect information on polling place closing times. The information has been corrected.