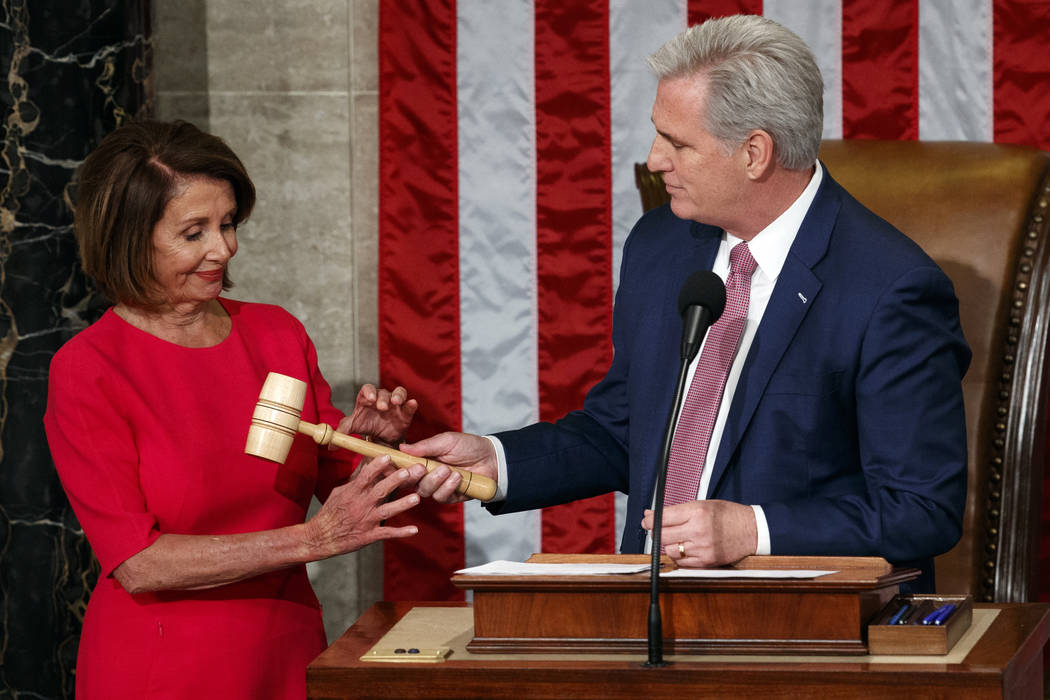 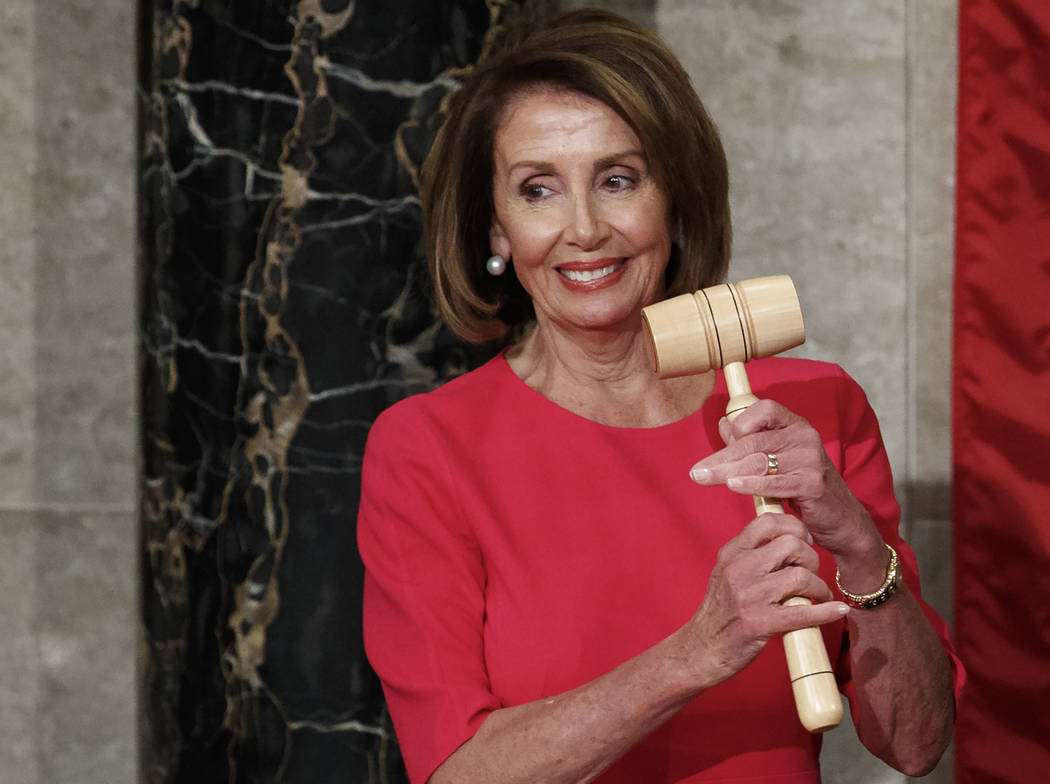 House Speaker Nancy Pelosi of California holds the gavel after at the Capitol in Washington, Thursday, Jan. 3, 2019. (AP Photo/Carolyn Kaster) 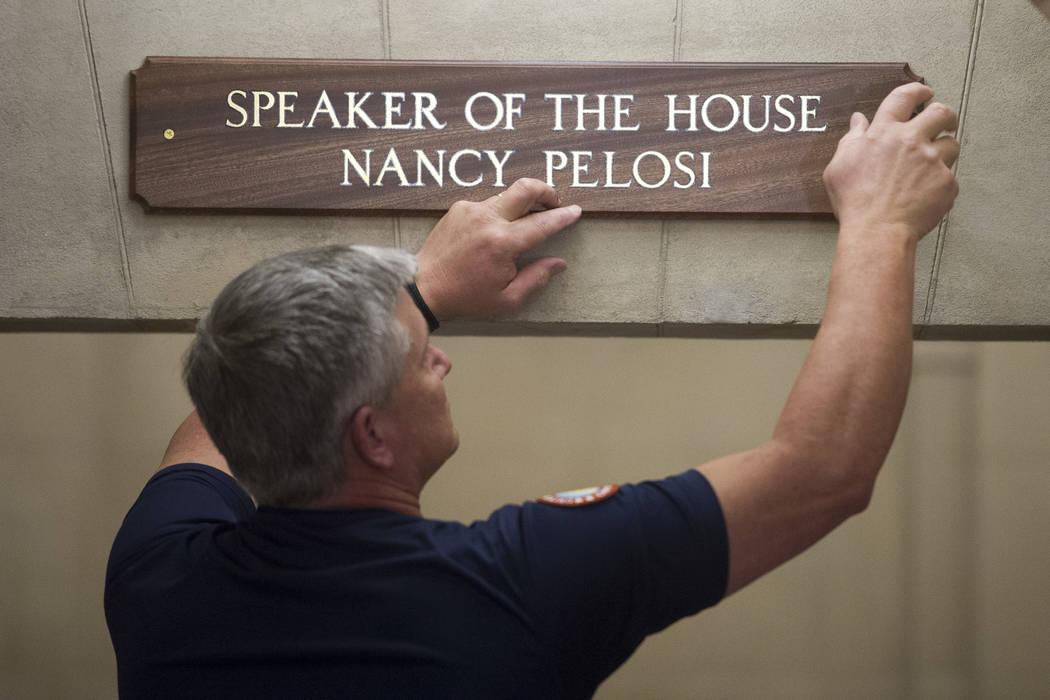 The sign at the office suite of House Speaker Nancy Pelosi of Calif., is installed on Capitol Hill in Washington, Thursday, Jan. 3, 2019, during the opening session of the 116th Congress. (AP Photo/Cliff Owen) 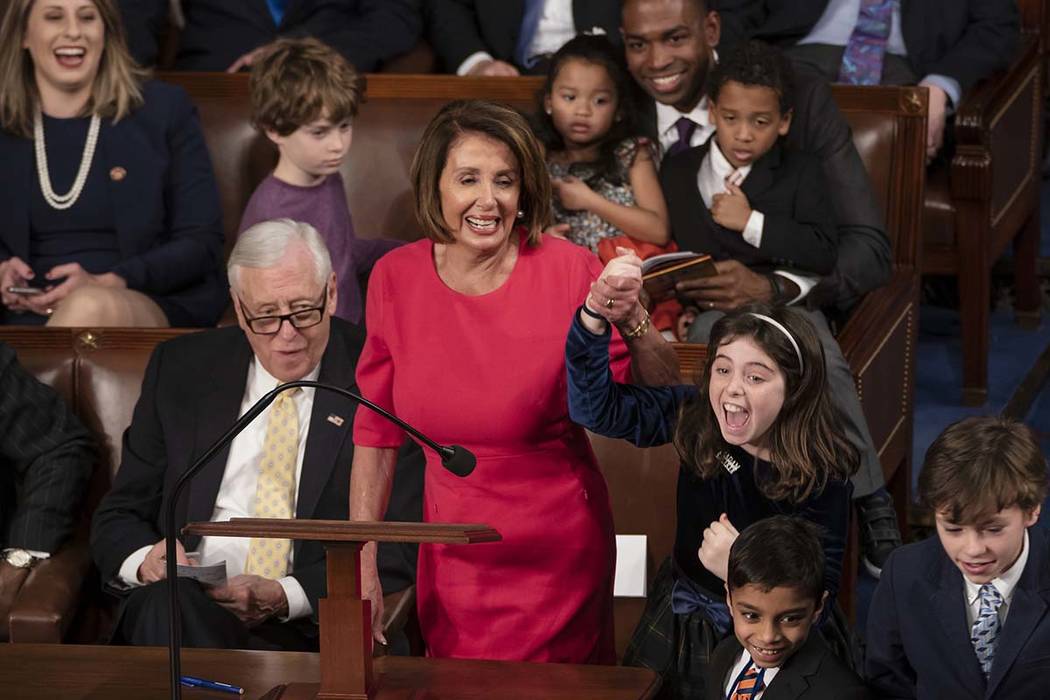 With some enthusiastic assistance from her grandchildren, House Democratic Leader Nancy Pelosi of California smiles as she casts her vote for herself to be speaker of the House on the first day of the 116th Congress, at the Capitol in Washington, Thursday, Jan. 3, 2019. (AP Photo/J. Scott Applewhite) 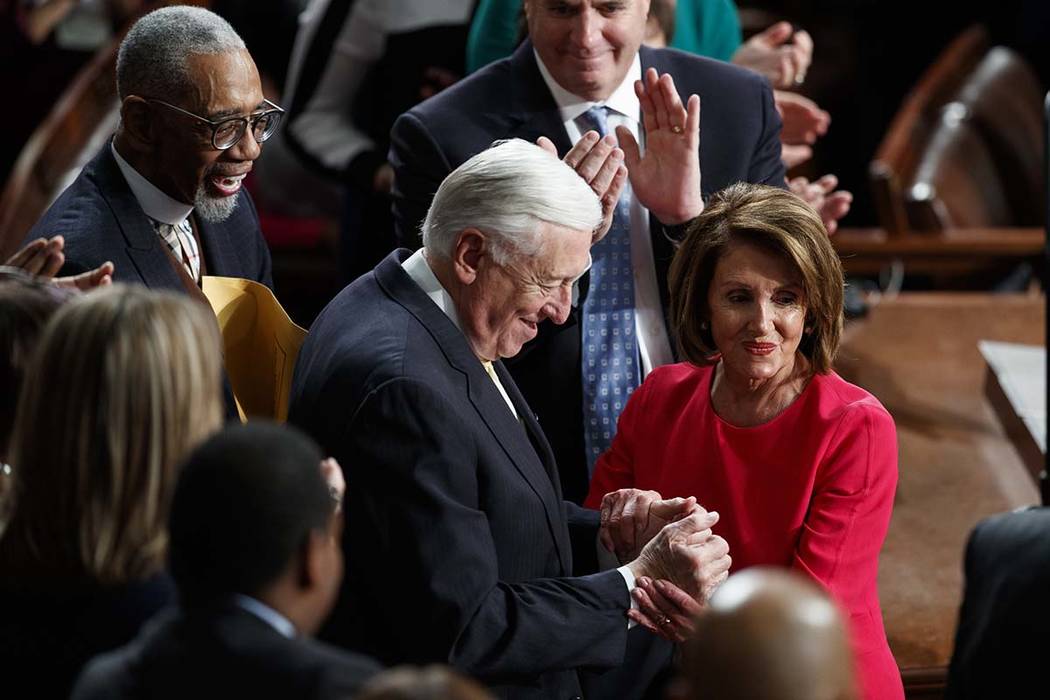 House Democratic Leader Nancy Pelosi of California, who is expected to lead the 116th Congress as speaker of the House, and House Minority Whip Steny Hoyer, D-Md., are applauded at the Capitol in Washington, Thursday, Jan. 3, 2019. (AP Photo/Carolyn Kaster) 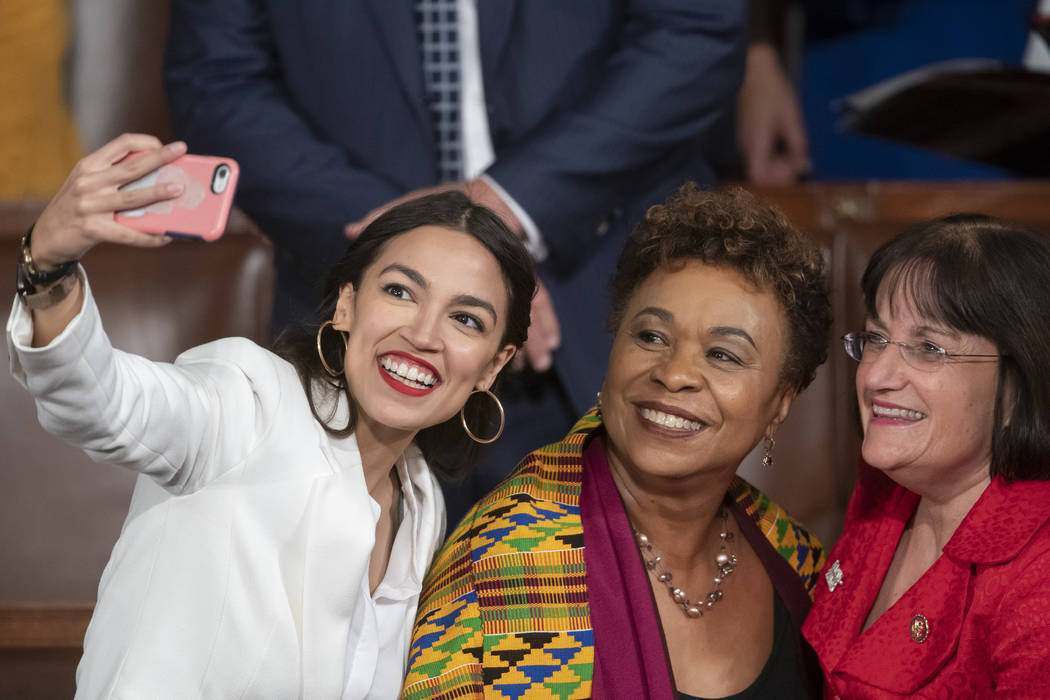 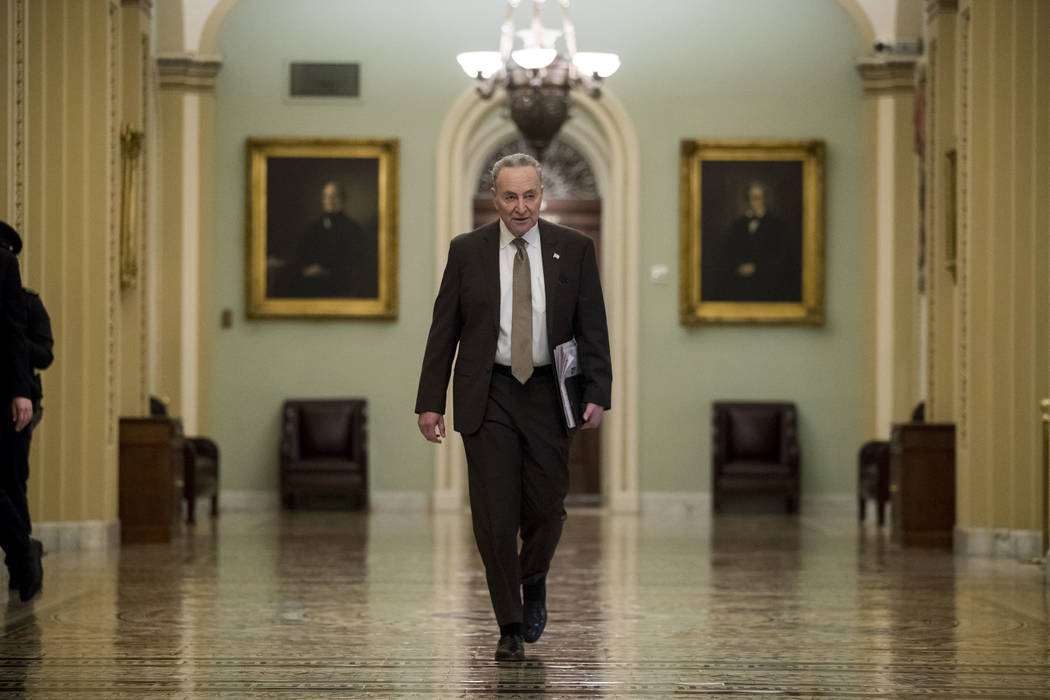 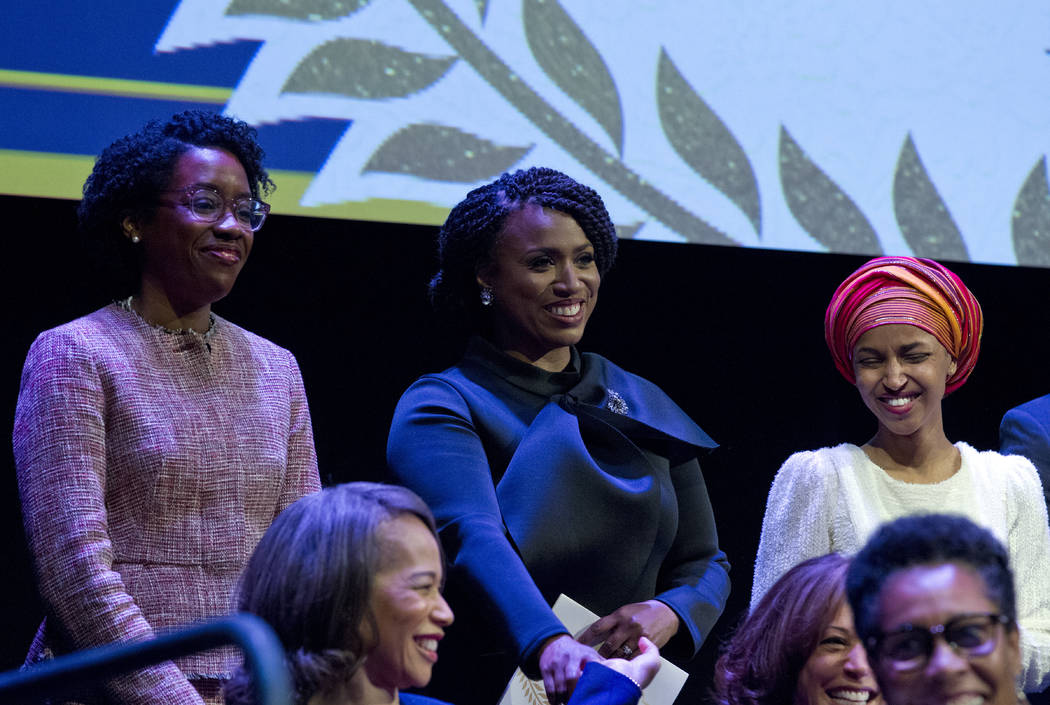 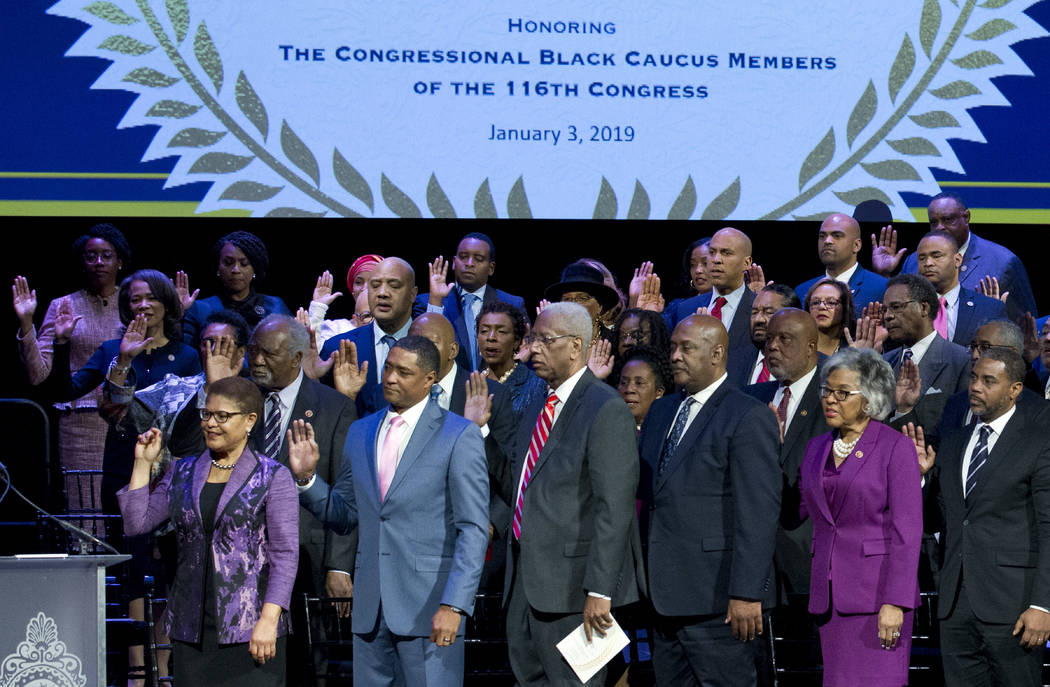 Members of the Congressional Black Caucus raise their hands during the swearing-in ceremony of CBC members at The Warner Theatre in Washington, Thursday, Jan. 3, 2019. (AP Photo/Jose Luis Magana) 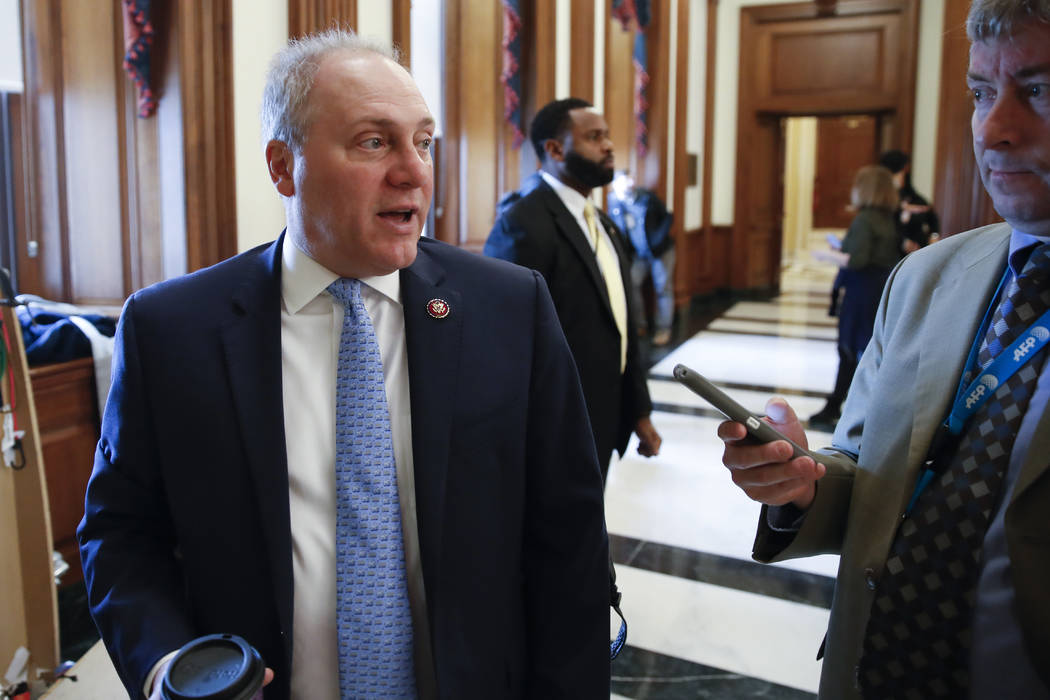 WASHINGTON — Nevada contributed to the historically diverse freshman class of lawmakers sworn in Thursday as Democrats took control of the 116th Congress and Rep. Nancy Pelosi reclaimed the speaker’s gavel with the promise of a “new dawn” in America.

“This House will be for the people,” Pelosi said, promising a Democratic agenda that would include lowering health care costs, the price of prescription drugs and reforms to make government more transparent.

President Donald Trump, in his first visit to the White House briefing room since his election two years ago, congratulated Pelosi on a “very, very great achievement.”

Republicans had controlled the House since the first midterm election of the Obama era, when the GOP retook the reins after a Democratic House and Senate passed the Affordable Care Act.

Democrats were swept back into control of the House in a similar wave in the 2018 midterms, which were considered a referendum on Trump.

Before handing Pelosi the gavel, House Minority Leader Kevin McCarthy said Thursday that people wonder if Congress can solve big problems. “It’s up to all of us, all of us in this room, to make Congress work,” he said.

In one of their first votes, House Democrats voted to reopen the government during the 13th day of a partial shutdown over Trump’s demand for $5 billion in money for a border wall.

Pelosi told reporters “there is no border wall,” which she called immoral and inefficient before the vote began.

Senate Majority Leader Mitch McConnell, R-Ky., called the House action a “show vote” and said he would not take up legislation unless there was an agreement by the Senate and House and Trump was agreeable to sign it into law.

The White House, which now faces scrutiny from a Democrat-controlled House, has asked leaders from both chambers and parties to sit down Friday to discuss the shutdown.

In the Senate, Nevada Democrat Jacky Rosen took the oath of office and was accompanied by Sen. Catherine Cortez Masto, D-Nev., and former Sen. Richard Bryan, a Democrat who held the seat from 1989 to 2001.

Rosen told the Review-Journal that Bryan was a role model and one of the first people she reached out to when she ran for elective office.

“I’m so proud to represent the whole state,” Rosen said, noting that it was Nevada that provided her the opportunities that allowed her to rise in politics.

Bryan told the Review-Journal that Rosen “brings the kind of quality that this Senate needs.”

Cortez Masto said she looked forward to working with Rosen on issues that affect the state, and that can improve the lives of Nevada residents.

“In the span of two years Nevada has made history, electing it’s first and second female senators, a majority female legislature and Nevada Supreme Court,” Cortez Masto said in a statement.

In the House, Pelosi, D-Calif., was elected House speaker for a second time. She was supported by Nevada’s three congressional Democrats, Rep. Dina Titus, and newly elected Reps. Susie Lee and Steven Horsford.

Lee and Horsford had their children on the House floor, a tradition, when they voted for Pelosi for speaker in a 220-192 vote. Rep. Mark Amodei, Nevada’s lone Republican congressman, voted for McCarthy.

Titus, Horsford and Lee took a group photograph in the back of the chamber on a festive occasion for new members of both political parties.

Children filled the floor on both sides of the aisle. Crooner Tony Bennett, and drummer Mickey Hart, who played with the San Francisco-based Grateful Dead, were among those seated in Pelosi’s box in the visitor’s gallery.

Horsford, who was on the floor with daughter Ella, 11, said he was “humbled” by the opportunity to represent his North Las Vegas congressional district, which also includes Mesquite and Pahrump.

He held the seat once before, and made history in Nevada as the first African-American state Senate majority leader.

“It’s a historic day,” Horsford told the Review-Journal about the new Congress. “Many members are women. It represents the changing diversity of our country.”

Lee joins a record 106 women who will serve in the House.

Daughter Nevie, 19, and son, Cody, 13, were with Lee, who introduced her children to Pelosi and other Democratic leaders on the floor.

Lee, in a statement, said she was grateful for the opportunity to serve, “especially at this divisive time in our country’s politics.”

Divided government was on display as the House voted to reopen government, sending bills back to the Senate that fund shuttered departments for the remainder of the year, except for the Department of Homeland Security, where they passed a stopgap measure that would keep it open until Feb. 8 while differences are ironed out.

Amodei, a member of the House Appropriations Committee, voted against the bills to reopen the government.

“This ‘show vote’ messaging tactic – driven solely by House Democrat’s refusal to prioritize funding for border security – simply adds more fuel to the political fire and does nothing to solve the problem,” Amodei said in a statement.

“Having been here for a while now, I cannot recall a government shutdown by either side that proved to be an effective or responsible tool for resolving policy disputes,” he added.

Cortez Masto urged McConnell to take up the bills in the Senate.

“McConnell must stop allowing President Trump to take our government hostage,” she said.

Before the House vote, the White House issued a recommendation by presidential advisers at the Office of Management and Budget who urged a veto of both bills.

About 800,000 federal employees have been impacted by the shutdown, forced to work without pay or stay home while Congress and the White House bicker over wall funding and border security.

Several thousand of those federal employees live in Nevada.

Lee said the first course of House business should be reopening the unnecessary shuttering of federal departments, because of those negatively impacted “as a result of this partisan brinksmanship.”