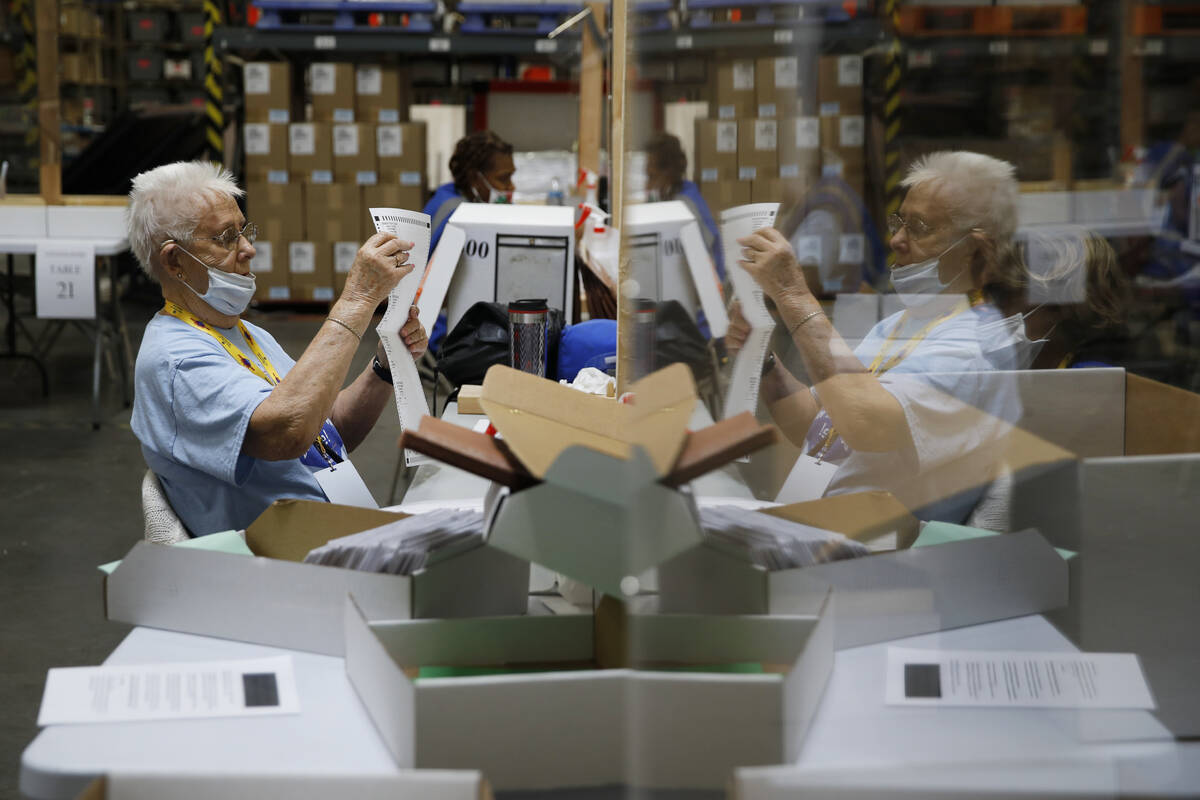 Election workers process mail-in ballots during a nearly all-mail primary election in Las Vegas, June 9, 2022. For the first time in decades, hand-counting will be used in parts of Nevada on election day. Nationwide proponents of hand-counting have described the old-school method in broad terms as a way to address distrust in elections. (AP Photo/John Locher, File) 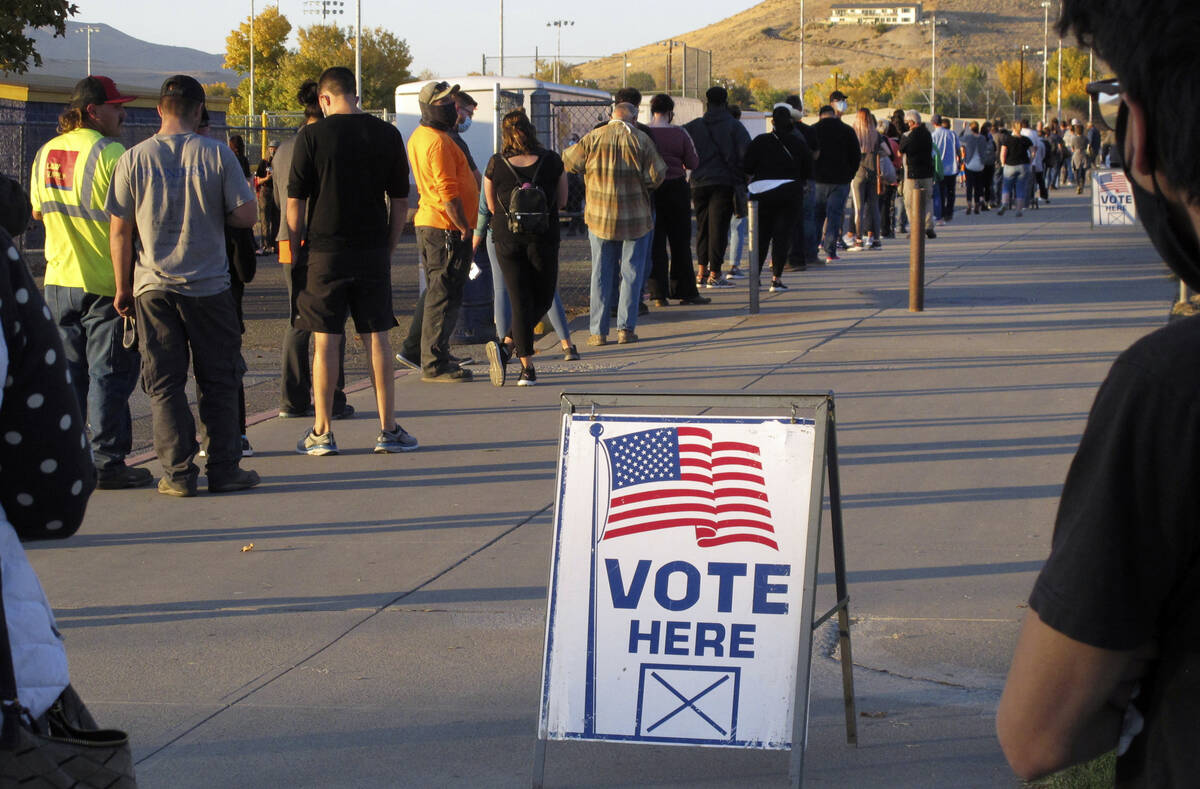 People wait to vote in-person at Reed High School in Sparks, Nev., prior to polls closing on Nov. 3, 2020. For the first time in decades, hand-counting will be used in parts of Nevada on election day. Nationwide proponents of hand-counting have described the old-school method in broad terms as a way to address distrust in elections. (AP Photo/Scott Sonner, File) 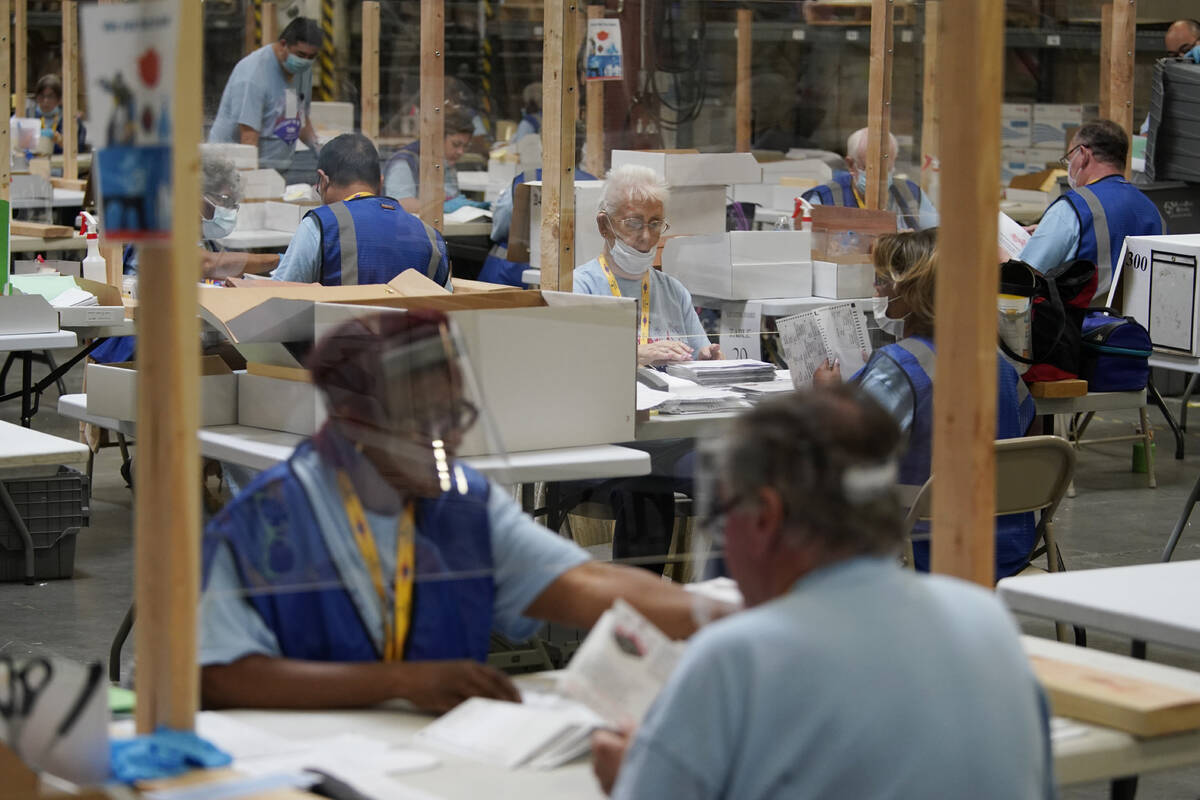 Election workers process mail-in ballots during a nearly all-mail primary election in Las Vegas. For the first time in decades, hand-counting will be used in parts of Nevada on election day. Nationwide proponents of hand-counting have described the old-school method in broad terms as a way to address distrust in elections. (AP Photo/John Locher, File) 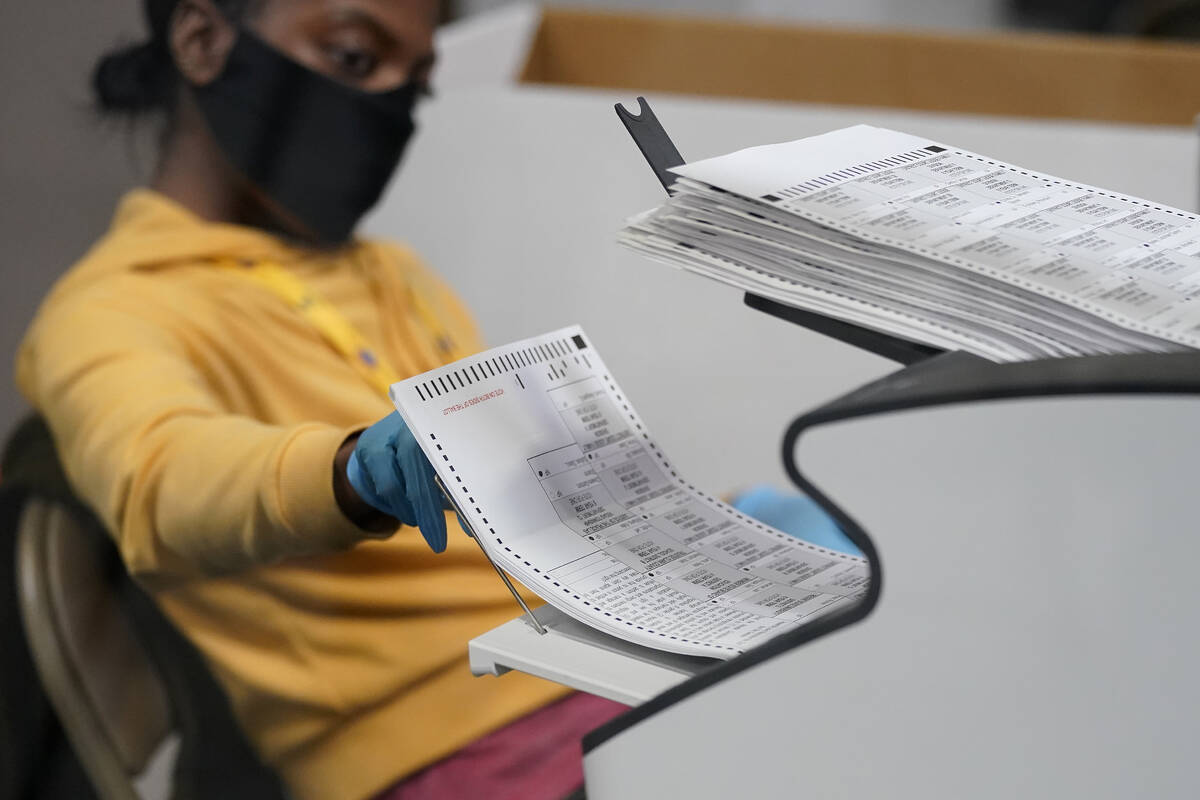 A county election worker scans mail-in ballots at a tabulating area at the Clark County Election Department, Thursday, Nov. 5, 2020, in Las Vegas. For the first time in decades, hand-counting will be used in parts of Nevada on election day. Nationwide proponents of hand-counting have described the old-school method in broad terms as a way to address distrust in elections. (AP Photo/John Locher, File)

RENO — Hand-counting teams of four, not all from the same party. Table centers at least 10 feet apart. Ballots counted 20 at a time.

Those are some of the regulations the Nevada secretary of state’s office is proposing for how counties can count paper ballots by hand amid a growing push for the method in some rural parts of the state where election misinformation, including a distrust of voting machines, has grown.

Mark Wlaschin, deputy secretary of state for elections in Nevada, said the regulations have been in the works for nearly a year and don’t come in direct response to events in Nye County, where the county clerk responsible for administering elections resigned last month after election conspiracies led to a successful push to hand-count votes.

“It’s been kind of an ongoing discussion across the nation, really. And as election officials at the state and county level, we try to think ahead,” he said of the guidelines, which will be discussed in an online meeting Friday with the public for feedback. If approved later this month, the guidelines would be in place for November’s election.

Wlaschin said the rules would help counties that opt to switch to hand-counting systems, preventing clerks from having to draw up rules from scratch. They would also create a uniform structure so the state can ensure the counting is valid. If a county wants to switch to hand-counting, he said, “at least now it’s not going to fall on the clerk to (conduct) a year of research in developing a template of his or her own.”

Nye County is one of the first jurisdictions nationwide to act on election conspiracies that have harbored a mistrust in voting machines. Nevada’s least populous county, Esmeralda, already used hand-counting during certification of June’s primary results, when officials spent more than seven hours counting 317 ballots cast.

“There are a lot of states and local jurisdictions where there is a real push among advocates to do something like this,” said Derek Tisler, counsel for the Brennan Center for Justice’s democracy program. “But they seem to have had more success in Nevada than we’ve seen across the country.”

Proponents of hand-counting have described the old-fashioned method as a way to address distrust in elections, especially unproven claims that voting machines are prone to hacking and are untrustworthy. Experts say hand-counting is not only far more time consuming but opens the process to more errors.

At the center of the hand counting push is Mark Kampf, the new interim Nye County clerk who has repeated the lie that former President Donald Trump won the 2020 election. He wrote the framework of a new vote-counting plan that would transform elections in his rural county with the help of Jim Marchant, a Republican secretary of state candidate and leader of the “America First” coalition of candidates who deny the validity of the 2020 election results. At a February candidates forum, Marchant told a crowd “Your vote hasn’t counted for decades.”

Kampf, Marchant and others who have lobbied to switch to hand-counts by now are used to questioning the procedures used in 2020. But as November approaches, Nye County officials are the ones facing questions: How will the hand-count be fair and accurate? How will they get the bipartisan workers required to count the vote under the proposed guidelines? How will they work in the same offices they’ve sowed distrust in since 2020?

In an interview during his first full day in office Monday, Kampf declined to discuss his belief that the 2020 presidential election was stolen, saying his views about that election are not relevant to his new job.

Complying with the law

Instead, he outlined his plan for paper ballots that are the exact same as current mail-in ballots, in-person signature verification and a camera livestream set up alongside poll watchers so others can see the voting process as well.

“I will never do anything that will jeopardize the vote and the integrity of the vote in this county, ever,” he said.

Alongside the hand-count will be a parallel tabulating process that uses the same machines currently used to count mail-in ballots.

Kampf said he agrees with many of the state’s proposed hand-counting rules, though he thinks teams should count 50 ballots at a time, rather than 20.

“If passed as is, I need to comply with the law,” he said. “I may not like the law, but as clerk, I need to follow the law, period.”

Absent from the regulations is any enforcement if a county fails to follow the rules. Wlaschin acknowledged there is nothing in writing but said the office has considered “a number of contingencies” for noncompliance. Part of ensuring compliance falls on the secretary of state’s office, he said, and part of that falls on the county clerks.

Nearly every other Nevada county plans to stick with machine counting.

Carson City Clerk-Recorder Aubrey Rowlatt said it would be “extremely difficult to accurately complete and certify” hand-counted ballots within the current certification timelines. Still, she called the proposed regulations helpful for consistency.

Humboldt County Clerk Tami Rae Spero read the hand-count regulations and thought of what resources that would take in her rural county of about 17,000.

The teams of four and table spacing requirements would help a hand-count run smoothly, but she wondered where would she find the needed space and bipartisan personnel.

“Let’s just hope we don’t actually ever have to,” she said.