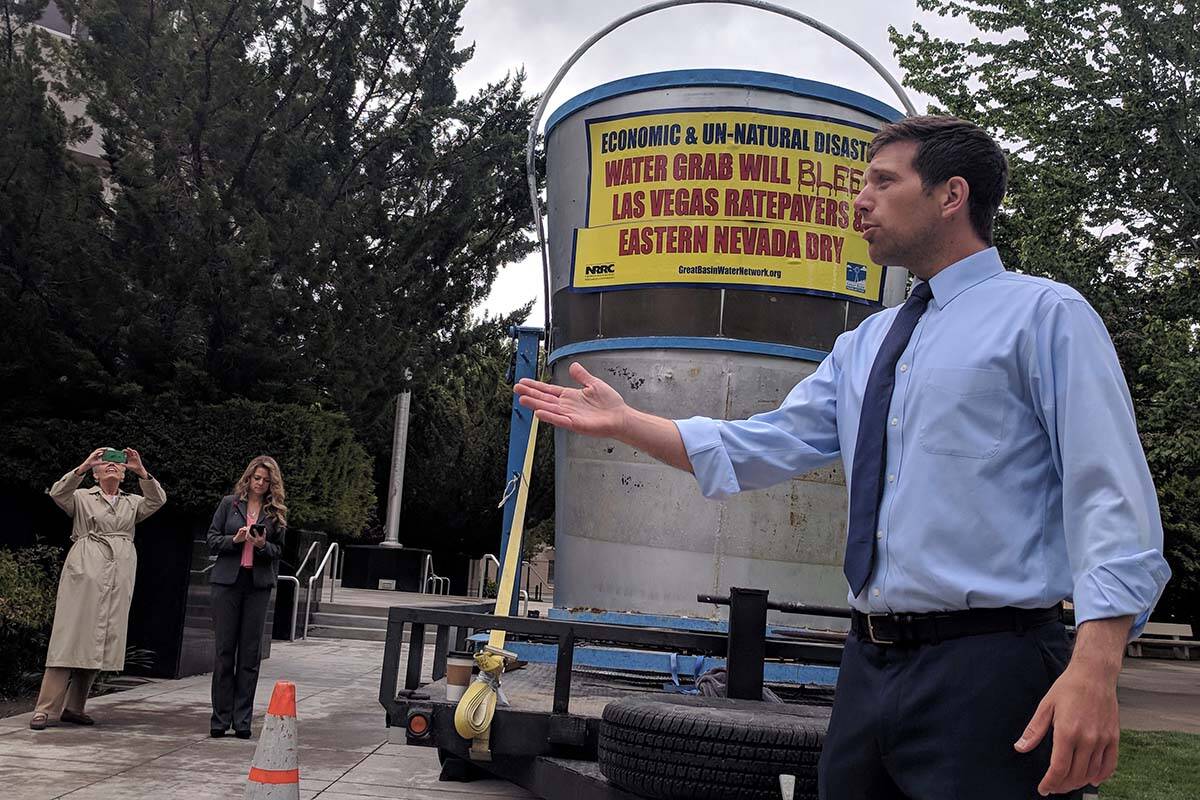 A battle is brewing on the border of the nation’s two driest states over the West’s most precious resource.

Utah water officials have long eyed pumping groundwater into the burgeoning community of Cedar City, but a coalition of ranchers, environmentalists, tribes and rural politicians is pushing back, arguing the project will have wide-reaching consequences, including some in eastern Nevada.

“I think this ranks as one of the most irresponsible water projects in recent history,” said Kyle Roerink, executive director of the Great Basin Water Network.

But the Central Iron County Water Conservancy District, which serves Cedar City and the surrounding area, said the project is important to not just fuel growth in the city of about 35,000 people. It will ensure water can be delivered to people who already live there.

Cedar City, about 170 miles northeast of Las Vegas, gets its water from an aquifer in Cedar Valley. The city and its surrounding area uses about 28,000 acre-feet per year from an underground system that is only capable of producing about 21,000 acre-feet.

One acre-foot — equal to about 325,000 gallons — is roughly what two Las Vegas Valley homes use over the course of 16 months.

Last year, Utah adopted a groundwater management plan last year that will roll back water rights and reduce the amount of water that can be pumped out of Cedar Valley.

Because of this, municipalities in the area stand to lose about 75 percent of their water rights, Central Iron County Water Conservancy District General Manager Paul Monroe said.

Roerink, however, said that users in Cedar Valley are only being asked to live within the limits of the aquifer and that the water-right rollback ends in 2080, not instantly.

To preserve water rights in Cedar City and pave the way for more growth, the water district wants to pump about 15,000 acre-feet of water it has rights to from nearby Pine Valley, a proposal that is under federal review.

Opponents of the Pine Valley project say the Central Iron County Water Conservancy District has failed to take any meaningful conservation measures before putting a straw in the ground.

“They’re making zero investments in conservation,” Roerink said. “When you compare what the (Southern Nevada Water Authority) has done in Southern Nevada and then you look at what Cedar City is doing, it’s night and day.”

Roerink said a few changes to how water is used would be good for ratepayers, good for the environment in the long run and would ease tensions with neighboring counties that oppose the project.

But Monroe said Cedar City and Las Vegas are two distinct communities that, aside from both being in an arid climate, face different circumstances.

Las Vegas has faced water challenges longer than other areas and has experienced far more growth than Cedar Valley, he said.

“Well, I think, looking at Las Vegas and your basin, is you guys have a straw that you’re dipping into out of the Colorado River and importing water from there,” he said. “And at what point did you decide that that wasn’t sustainable and that you needed to conserve more?”

Western cities have a history of importing and diverting water to where people want to live, and the Pine Valley project would only do the same, he said.

While the district he runs is interested in turf removal efforts, such as the rebate program offered in Southern Nevada, those approaches are costly and don’t save as much as agricultural efficiencies, where his agency has put its focus. And it isn’t cheaper than building the Pine Valley pipeline, he said.

An acre-foot of water from the Pine Valley project will cost about $17,000. The cost of conserving an acre-foot of water by paying homeowners $3 per square-foot to remove their grass — the same rate the Southern Nevada Water Authority pays — would cost $56,000, he said.

Conserving is always good, Monroe said, but it may not always be the most cost effective.

Roerink has built a coalition of rural governments, tribal members and ranchers to fight the pipeline, arguing that pumping the groundwater would hurt other nearby basins and have far-reaching consequences in the long run.

He said his coalition consists of officials from Utah’s Beaver County, Juab County and Millard County; White Pine County in Nevada, the Indian Peaks band of Paiutes, the Confederated Tribes of the Goshute Reservation and ranchers from both Utah and Nevada.

The project could lead to a significant drawdown in groundwater in coming decades, he said, and could harm flow systems that lead to the Great Salt Lake, which has faced its own issues with water level decline.

Between the underground waters in and around Pine Valley and the Great Salt Lake are places like Great Basin National Park, Fish Springs National Wildlife Refuge, public rangelands and habitats for various animals, all of which could feel the effects of groundwater pumping, he said.

“While we may not see the aquifers themselves, we can see their impacts in basins along the Nevada-Utah border, where you have meadows and springs that provide water and plant life and sustenance for wildlife all throughout Snake Valley,” Roerink said.

Tom Baker, a rancher in the Nevada town of Baker, just outside of Great Basin National Park, said the pumping could hurt his operation by reducing the spring flows that keep alive the meadows that feed his livestock.

“If we don’t have the water to irrigate, then we have less feed for the cattle,” he said.

He also farms with some of that spring water, growing corn, barley, oats and alfalfa. He said the areas served by the Iron County water district should be working to conserve water and consider limiting their growth.

“It’s not good to look at other parts of the state for your water supply,” he said. “Especially to build these big, really expensive pipeline projects out into the desert where there’s very little water to begin with.”

And Gary Perea, a former White Pine County commissioner, said the Utah water district doesn’t even know how the pipeline will affect the environment. Perea, also a Baker resident, is working on behalf of White Pine to represent the county’s interests during the federal review of the project.

“I just don’t understand how they can lay out that kind of money for a pipeline and wells and they have absolutely no idea about the characteristics of the basin, and how much water is available,” he said.

The Paiutes submitted comments to the federal government arguing the central Iron County water district would take away resources that are intertwined with ancestral land. The Confederated Tribes of the Goshute Reservation believe the project would deprive tribal communities of resources necessary for their health, safety and well-being.

Modeling for the project shows anticipated drawdown would not extend to the groundwater basins where the tribal reservations are located.

Monte Sanford, a consultant for the Confederated Tribes of the Goshute Reservation, said drawdown of groundwater within the reservation is not the main concern.

“But this area where most of the groundwater drawdown would be, that is tribal, aboriginal territory and they have ceremonial sites within those areas,” he said.

Monroe, the Utah water manager, said he is confident the Pine Valley project will provide a sustainable source of water to his growing community while having a minimal effect on other basins like Snake Valley.

He said people who haves concerns about the project should look at the science being produced in the environmental review process and at what his water district is committed to doing.

Monroe said the United States Geological Survey modeling that the Great Basin Water Network is relying on to make its argument has incomplete information and that the modeling available now shows any drawdown near the Nevada state line will not be measurable or noticeable.

He said his agency is committed to installing monitoring wells around the Pine Valley basin to gauge the level of the water table.

“And if the impacts look like they may be increased or worse than what the model was predicting, then that triggers a bunch of things, and eventually it would require us to reduce our pumping amount,” he said.

Monroe said his agency’s project would not contribute any more to groundwater drawdown in Snake Valley than what is already being pumped there.

“There’s not just one straw in those basins out there that is doing things,” he said.

Roerink, however, said the modeling in the federal review is not peer-reviewed, but “paid-for consultant reports” for the project proponents.

The water district has no standards, triggers or thresholds associated with its monitoring and mitigation plans, Roerink said.

And if the district were serious about its protection plan, the project cost would be even higher than it is.

By 2030, the average monthly water bill of users in Cedar City would increase by $54, according to the environmental review.

An increase of that amount would apply if the project was paid back only by current water users in Cedar Valley, according to the water district. Officials want to pay for the pipeline with a combination of grants, loans, impact fees, user fees and property taxes.

A tentative timeline for the $250 million project shows construction on the pipeline could begin in 2027.

Even if the pipeline does pass environmental scrutiny, it’s far from being a done deal because it would still need community approval, Monroe said.