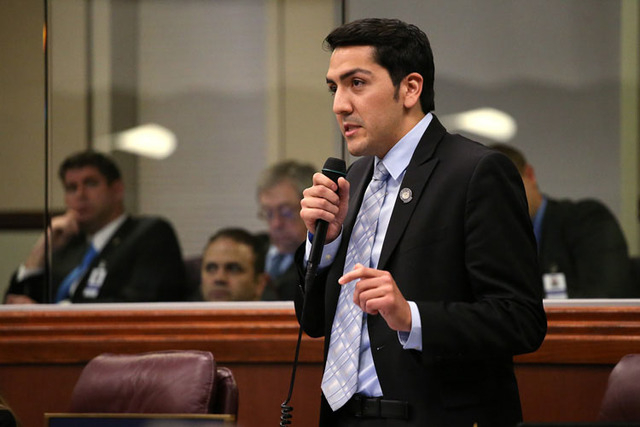 Nevada Assemblyman Nelson Araujo, D-Las Vegas, speaks in in opposition to a bill that would have required children to use bathrooms cooresponding to their biological gender during debate on the Assembly floor at the Legislative Building in Carson City, Nev., on Tuesday, April 21, 2015. (Cathleen Allison/Las Vegas Review-Journal)

CARSON CITY — A bill that would have required public school restrooms, locker rooms and showers to be used by students of one gender — and the one designated on their birth certificates — failed to win passage in the Assembly on Tuesday, a victory for opponents who said it would further ostracize transgender students.

Assembly Bill 375 was sponsored by Assemblywoman Vicki Dooling, R-Henderson, on behalf of parents who said the bill would provide accommodation, not discrimination, and is needed to ensure student privacy is preserved.

Dooling said the bill would provide the best available accommodations for transgender students.

“This bill will bring privacy and safety for all children,” she said in remarks in support of the bill on the Assembly floor.

Assemblyman Elliot Anderson, D-Las Vegas, said that if passed the measure would be challenged in court and cost the state money to defend.

Assemblyman Chris Edwards, R-Las Vegas, questioned where the money will come from to implement the new policy in all the schools statewide.

Assembly Judiciary Committee Chairman Ira Hansen, R-Sparks, said there is no fiscal cost to the bill.

Assemblyman Pat Hickey, R-Reno, said the issue should be left at the school district level. Nevada does not need another law that divides people, he said.

Five Republicans voted with 17 Democrats against the measure. In addition to Hickey, Derek Armstrong, Glenn Trowbridge and Melissa Woodbury of Southern Nevada and Robin Titus of Wellington, a physician, voted against AB375.

The American Civil Liberties Union of Nevada welcomed the vote and said the bill was an effort to impose state-sanctioned discrimination and segregation.

“This bill wasn’t even a thinly veiled attempt — it was discrimination against a class of people pure and simple — we will not stand for this type of torment, bullying or discrimination,” said Tod Story, executive director.

Opponents of the bill had heavily lobbied members of the Republican caucus via Twitter and email who were viewed as potential “no” votes.

The committee hearing on April 10 generated strong testimony on both sides of the issue.

“School districts around the nation are being coerced into implementing policies that violate the privacy of a majority of students,” said Karen England, executive director of the Capitol Resources Institute, a lobbying force for Christian conservatives based in Sacramento, Calif., that’s also active in Nevada.

The creation of coed restrooms favors “special rights for the few over the concern for privacy, modesty and comfort for so many more students,” England said in her testimony before the Assembly Judiciary Committee. The bill passed out of the panel on a party-line vote with Republicans in support.

A Clark County schools spokeswoman said the transgender policy is still being drafted and is the result of a review of different laws and regulations as well as the need to provide guidance to principals regarding student needs.

The School Board eventually will be called on to approve the policy in a public meeting.