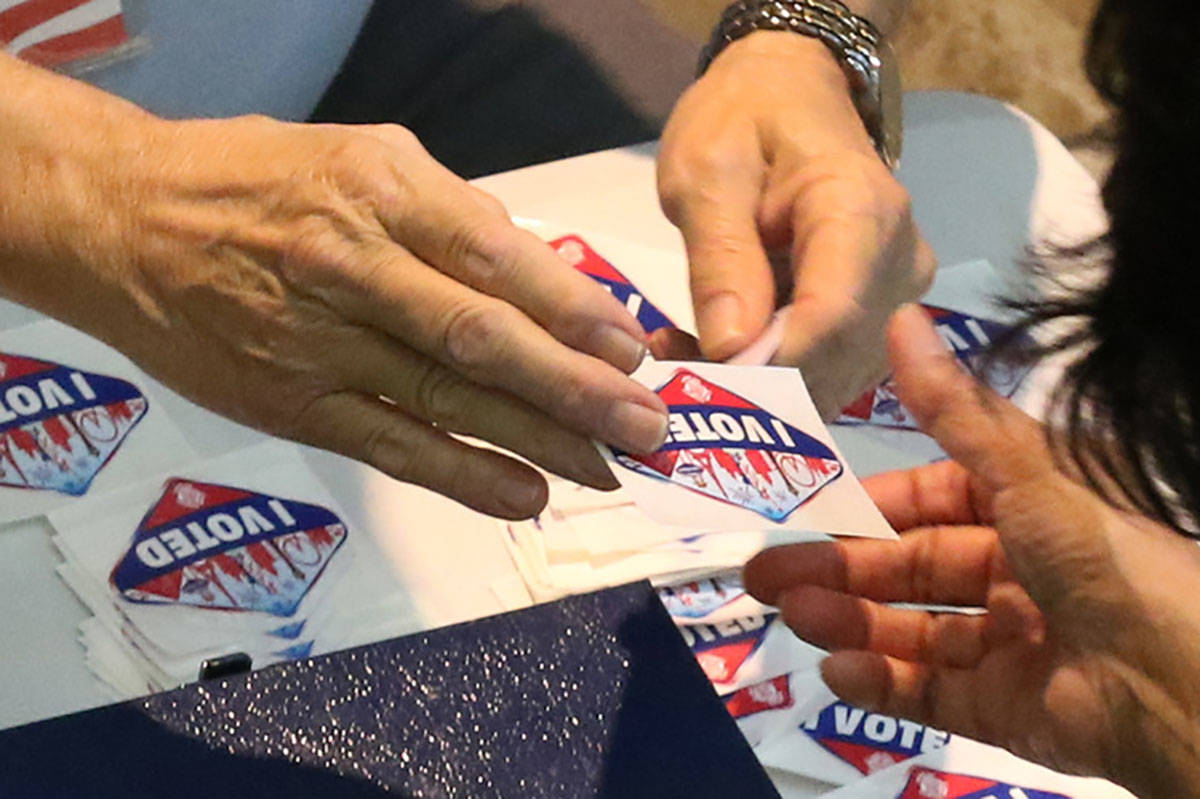 A worker hands out "I Voted " sticker to a voter at a polling station at Galleria Mall on Tuesday, Nov. 6, 2018, in Henderson. (Bizuayehu Tesfaye/Las Vegas Review-Journal) @bizutesfaye

Clark County will add two more in-person voting sites for the upcoming June 9 all-mail primary election, according to court documents filed Monday. It will also mail ballots to all inactive voters in addition to active voters.

The changes were detailed in a document filed in opposition to a lawsuit brought against county and state election officials by the Nevada State Democratic Party, Democratic National Committee and related groups. The Democrats are demanding more in-person voting locations, that ballots be sent to all inactive voters and the relaxation of laws on ballot signature matching and vote harvesting.

In response, the Democrats withdrew their motion for a preliminary injunction against the state’s election officials, though the lawsuit remains ongoing.

“The Clark County registrar made the right decision in moving to mail ballots to all registered voters — not just those deemed ‘active,’ expanding the number of in-person polling locations and updating their signature review process,” the Democratic groups said in a statement.

The Democrats encouraged Nevada’s other counties to make the same changes.

The statement called Clark County’s changes “a step in the right direction,” but the Democrats intend to continue the lawsuit in hopes of expanding the changes to the general election.

In Monday’s filing, county counsel Mary-Anne Miller wrote the changes were directed by “local county officials.” The original plan set out by Nevada Secretary of State Barbara Cegavske and agreed to by all county registrars called for one in-person voting location in each county.

The filing said the additional locations were “not thought to be needed because of the ease and safety of voting by mail ballot and because of the extremely low turnout for primary elections in Clark County in the recent past.” Miller added that mailing ballots to inactive voters will probably be “similarly unnecessary” because many will be returned due to outdated addresses.

The document includes an affidavit from Assistant Registrar Lorena Portillo, who shared the specifics behind those claims.

Portillo noted the county spent more than $330,000 on mail ballot signature verification hardware and software after the decision was made to move to an all-mail primary.

It will cost about $139,000 to lease the necessary hardware to expand in-person voting, Portillo said, and the county will have to find additional locations for voting sites. She added that many of the usual voting locations are not available because of concerns over COVID-19 exposure.

The county is capable of staffing two additional sites, she said, but an order from the court calling for more than three total sites would spread the staff thinner and lead to longer lines.

Mailing ballots to inactive voters will cost more than $184,000.

Portillo said signature verification has not been an issue in the past, noting that nine out of the 14,708 ballots returned in the 2018 primary did not match. In the 2018 general election, 59 out of 49,072 did not match.