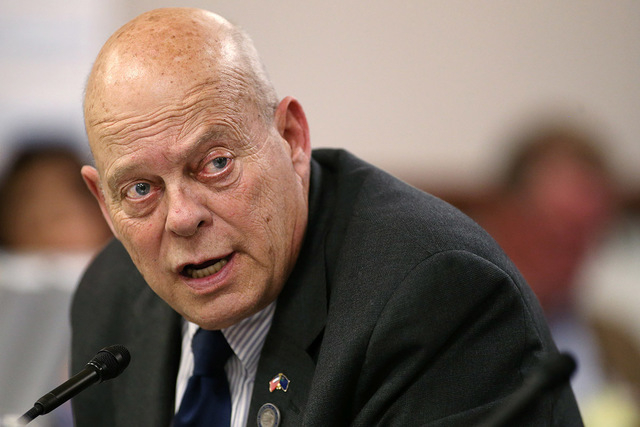 CARSON CITY — A group of conservative Nevada lawmakers Monday proposed an alternative to Gov. Sandoval’s $7.3 billion general fund budget that they say will fund the governor’s priorities without raising taxes.

“It allows the sunsets to sunset,” said Assembly Majority Whip Jim Wheeler, R-Gardnerville. “We look at living within our means.”

Wheeler, one of about 12 conservative Assembly members who attended a midday news conference along with Republican Controller Ron Knecht, said the measure is intended to “start the discussion on living within our means instead of raising taxes.”

“We believe it is not only possible to accomplish our goals using Nevada’s existing revenue base, but we feel strongly that it is our responsibility to do so,” Knecht said in a statement.

Sandoval’s budget calls for $1.1 billion in new or extended taxes, largely to fund new education initiatives. The cornerstone of his proposal is restructuring the state’s business license fee from a flat $200 per year to rates tied to gross receipts. Under the governor’s plan, license fees would range from $400 to up to $4 million annually depending on the type of industry and gross receipts. No business currently receives gross revenue warranting the highest tier rate.

Critics argue the business license fee proposal is similar to an initiative position rejected by voters in November. The governor’s office disagrees, countering his plan imposes different, lower rates based on industry type, as opposed to the 2 percent margins tax that was on the ballot.

Nevada voters “made it clear that they wanted their representatives to govern and improve the quality of our schools without raising taxes,” Wheeler said.

Supporters said the alternative budget would require only a majority of votes in each chamber because it doesn’t contain a tax or fee increase. The governor’s plan needs a two-thirds majority — or 14 votes in the Senate and 28 in the Assembly — for passage.

They called their measure a “work in progress,” and conceded a revenue shortfall of roughly $46 million would need to be filled.

The alternative budget would put money earmarked for such things as class size reduction, full-day kindergarten and early childhood development into a Student Achievement Block Grant and let school administrators decide how best to use the funding.

It eliminates many aspects of the Governor’s Office of Economic Development, and abolishes grants to regional development authorities. In addition, it would eliminate GOED’s Catalyst Fund used to entice businesses to move to or expand in Nevada, and shut down the Knowledge Fund, a program designed to encourage research, innovation and commercialization in Nevada.

While proponents say they have support for the plan, they have an uphill climb and little time given the 120-day legislative session is at the midpoint. Both the Assembly Ways and Means and Senate Finance committees have already begun closing state agency budgets.

Serious consideration would require the support of Republican leadership in the Senate and Assembly. Senate Majority Leader Michael Roberson, R-Henderson, is a key backer of the governor’s plan. He said Monday he has not seen any details of the Assembly GOP proposal, which would have to be drafted into bill form.