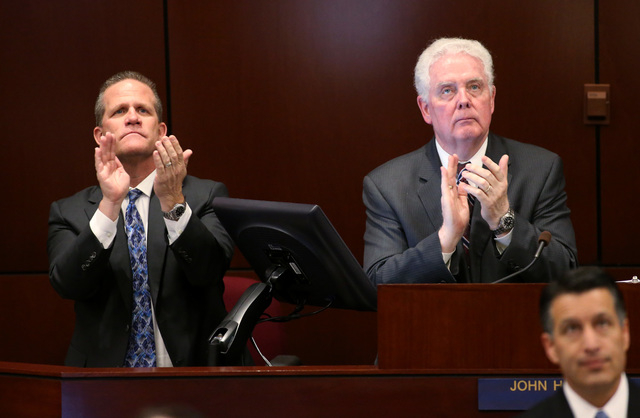 A small group is planning to launch a recall effort against Nevada Assembly Speaker-designate John Hambrick, hoping that last year’s low voter turnout and an anti-tax sentiment among hard-line conservatives will propel their work to gain the needed signatures.

If they have their way, their long-shot effort will disrupt the Assembly’s leadership in May during the 2015 session, recalling Hambrick, R-Las Vegas, from his legislative seat in the midst of decision-making on proposals to boost state revenue.

With involvement by conservative blogger and activist Chuck Muth, a political action committee with three directors formed in late December with the stated goal of waging a recall election against Hambrick, a state lawmaker since 2008 now in his fourth term and a retired federal law enforcement officer.

Organizers contend Hambrick has strayed from a pledge to not raise taxes and is not a reliable anti-tax vote in the Assembly. They point to statements he has made expressing a willingness to work with Republican Gov. Brian Sandoval, who unveiled in his State of the State speech an effort to raise business license fees to generate more revenue for public schools.

Factors they hope will turn the tide in their favor: a low voter turnout will make it easier to get the needed signatures for a recall election; and their anti-tax increase approach comes when the Legislature will be looking at high-profile tax measures. They also figure that Hambrick’s newfound status as speaker will only help their cause.

“If you take out the lead dog, you send one heck of a strong message,” Muth said.

A.J. Maimbourg, one of three directors listed for the Recall Hambrick PAC, ran unsuccessfully against Hambrick in the 2014 general election as an Independent American Party candidate. The other two are Russ Martin and Kristopher Del Campo, also residents of the Assembly district with Maimbourg. Muth is the registered agent, paperwork filed Dec. 29 shows.

Maimbourg vows that the effort is about pavement pounding and getting the word out in person.

“We’re not keyboard patriots,” she said. “We go out and get the job done.”

So far, she has 15 people on teams to gather signatures. Though she can’t start collecting signatures until 10 days after the legislative session begins Feb. 2, the planning is starting.

She expects to have more volunteers to target registered voters.

“Basically, I’m really excited about it because it shows that the people — we the voters — can do something when we’re wronged.”

Organizers need signatures from at least 25 percent of the voters who cast ballots in Hambrick’s district in the 2014 election, regardless of their political affiliation.

In the last election, 16,462 people voted in Hambrick’s district. At least 4,116 of them would need to sign the recall petition in order to hold a recall election.

Their goal is to beat both the 90-day deadline and the minimum voter threshold: 5,000 signatures within 30 days.

Getting the needed signatures is only one step. The next would be the election itself. During the election, any registered voter in the district could participate, regardless of whether they voted in the last election.

There are different scenarios. One is that other candidates could jump in, filing paperwork to be on the ballot, which requires the same number of signatures from 2014 voters.

Organizers hope to put forth a candidate but aren’t ready to name anyone yet.

Having an actual candidate would give them two potential options as they seek signatures for a recall.

If a recall election succeeds without an alternative candidate, the all-Democrat Clark County Commission would appoint someone of the same political party, but it isn’t bound by how conservative or anti-tax the new legislator would be.

Muth projects a recall election could be in May — potentially before any big tax votes are taken by the Legislature.

During the legislative session, Hambrick cannot raise money to fight a recall effort. But the PAC can do so.

“Any recall election is always a long shot,” Muth said. “They just don’t happen very often but we do have a couple things going for us in this case.”

Muth said Sandoval’s State of the State address calling for raising business fees is “very helpful to us” in raising awareness about the potential for higher taxes.

“Everybody knows that it’s out there,” he said.

Hambrick has a track record of handily winning elections in his district, which lies on the western edge of the Las Vegas metropolitan area.

He won the District 2 Assembly seat in November, capturing 79 percent of the vote against Independent American Party candidate Maimbourg in the general election. No Democratic candidates ran against him in 2014. In the 2014 primary, Hambrick fared equally well, with 76 percent of the vote in a two-person race against Republican Mark Slotta.

Besides the numbers, Hambrick also has history on his side. Secretary of state records dating back to 1993 show no successful recall efforts filed against state legislators, the office said.

Recall elections are more likely to be successful when filed against local politicians such as city council members or school board members, particularly in rural areas with fewer registered voters.

In general, recalls are “fairly rare,” said Eric Herzik, chairman of the political science department at the University of Nevada, Reno.

The primary obstacle is the threshold to have 25 percent of voters who cast ballots in the office-holder’s most recent election, he said.

That’s why no statewide official has ever been recalled, he said. For the recall pushers, Herzik said, the low turnout helps.

Still, he called the group’s goal to have Hambrick out in May a “pretty ambitious schedule.”

Of course, getting the signatures for an election is just one hurdle. Hambrick could always survive a recall election, keeping his Assembly seat.

“If they’re not successful and he gets re-elected, I would say that message backfired and you look like sore loser extremists,” he said.