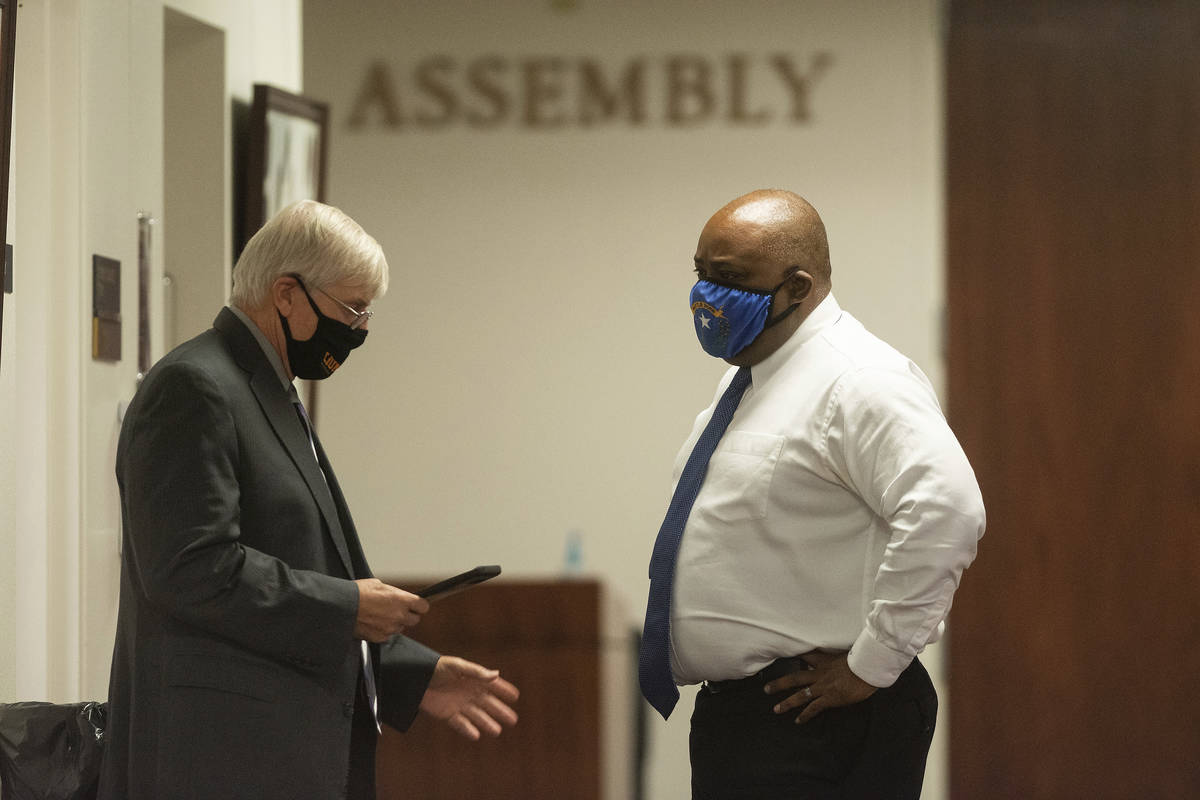 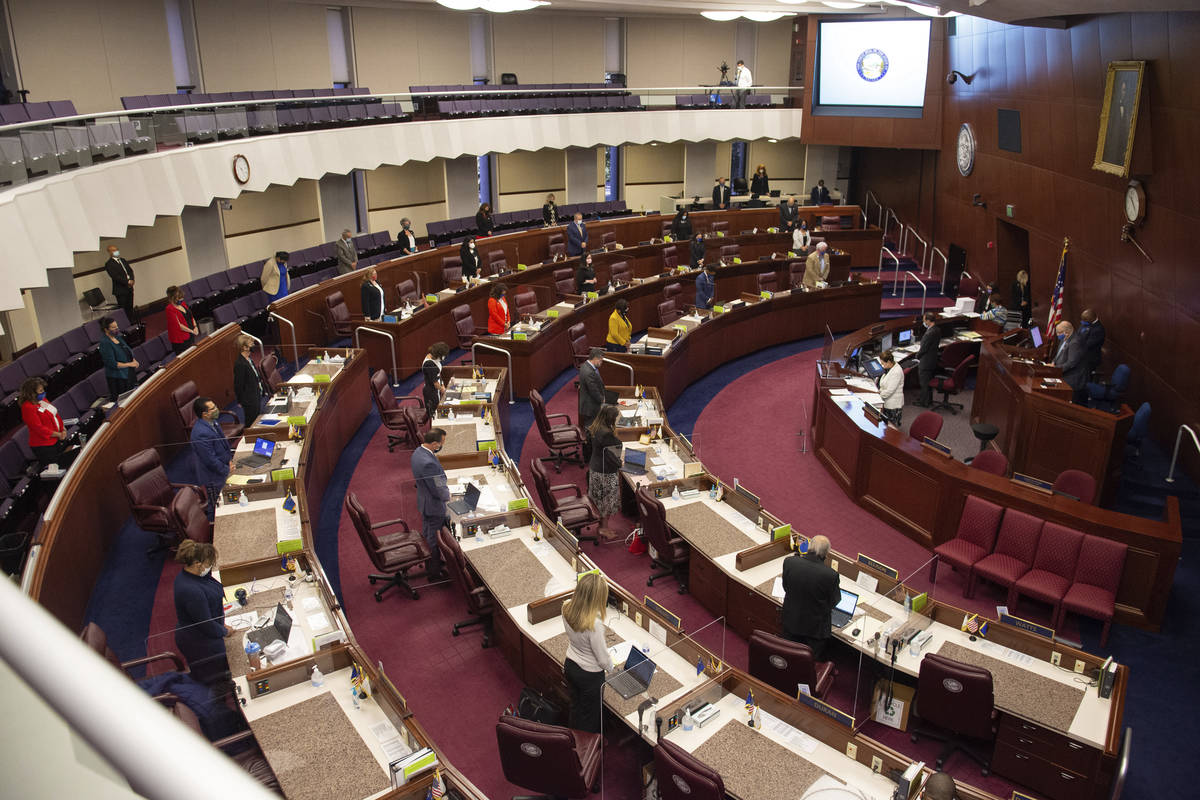 The Assembly meets on the first day of the 31st Special Session of the Nevada Legislature in Carson City in July 2020. (David Calvert via AP, Pool)

Nevada Democrats on Friday unveiled not one, but two proposals that would overhaul how mining companies in Nevada are taxed.

The separate proposals would both amend the state constitution, to remove the current 5 percent tax cap on net proceeds of minerals and replace it with a 7.75 percent tax on gross proceeds, which would likely generate hundreds of millions in additional revenue for the state annually.

The only difference between the two proposals would be how money is divvied up.

The Senate’s proposal would send half of the revenue to the state general fund, and the other half into a program that would be set up later to send dividends to Nevada residents, similar to how Alaskans receive dividend payments from revenues generated from the state’s oil resources.

The Assembly version would send more money to fund programs most affected by the economic crisis caused by the coronavirus, sending 25 percent of the revenue toward education and health care programs, and 75 percent to the state’s coffers.

Nevada has been one of the hardest-hit states in terms of the economic fallout from COVID-19, with the state expecting a $1.2 billion loss in revenues for the current fiscal year — a number that represents nearly one-quarter of the state’s budget.

Everyone at the table

Assembly Speaker Jason Frierson, D-Las Vegas, said the proposals are needed to address the long-term economic health of the state and are an effort “to make sure that we are taking advantage of the opportunity to have all of our community stakeholders help us with stabilizing our budget.”

“At the end of the day, we are in a crisis and we have community needs that we cannot afford to go backwards on,” Frierson said. “And so we need to invite all of our stakeholders to the table to have a conversation about how we can spread out the burden of meeting our community’s needs.”

Constitutional amendments need to be approved by two separate Legislatures. So if approved by lawmakers in this current special session, the proposals would go to the 2021 session for a second round of approvals.

From there, lawmakers would have a choice to make over which proposal they’d move forward with, said Sen. Chris Brooks, D-Las Vegas.

Although the Nevada constitution requires a two-thirds vote for any revenue increases, the mining proposals would create a carve-out to treat taxes levied on the mining industry differently.

Tyre Gray, president of the Nevada Mining Association, said that the proposal would be “a death sentence for Nevada’s mining industry.”

Gray noted that there are 40 mines in Nevada that are not profitable, and said the change from the net to gross proceeds could cripple those businesses, as well as the rural communities they operate in.

“What happens to these communities? Do they lose their financial independence and look to Clark County and Washoe County for supplementation of these lost revenues?” Gray asked while testifying against the bill.

Mining prices can fluctuate wildly, making it difficult to predict exactly how much the proposals could generate.

In 2019, total gross proceeds from mineral extraction in Nevada were $7.6 billion, and net proceeds after deductions were $2.3 billion. The net amount of taxes paid by the industry was $122.7 million, half of which went to the state and the other half to counties.

Under the new proposals, those tax revenues would have been closer to $590 million, all of which would go to the state.

“Specifically for the rural counties, a reduction in net proceeds could really have an adverse impact on the broad range of critical county services that those counties provide,” said Dagny Stapleton, executive director of the Nevada Association of Counties, testifying on the measure in the Senate Friday. As an example, she noted that the mining tax represented 25 percent of all revenue Humboldt County received in 2019.

In a statement, Sen. Pete Goicoechea, R-Eureka, said that the changes “will kill small mines throughout Nevada.”

In order to raise the mining tax under the proposal, there would need to be only a simple majority votes. But to decrease that tax rate would require a two-thirds vote from both houses.

Brooks said the changes would also allow for lawmakers to create further carve-outs within the industry, such as for specific minerals or to set different tax rates for mines that are in a different tax class, such as lowering the rate for smaller mines.

Brooks added that the requirement for two-thirds to lower or exempt out certain parts is because there should be “a higher bar.”

Patrick Donnelly, state director for the Center for Biological Diversity, said the Assembly’s proposal to use the money to directly fund education and health care makes significantly more sense than sending checks to Nevadans.

“We’re talking bout $200 bucks here. It’s not enough that a Nevadan will be pulled out of impoverished living conditions. It’s not enough to make a substantial difference for a way of life of people,” Donnelly said.

The dividends idea would also be akin to mining companies “bribing Nevadans into letting them conduct destructive practices,” Donnelly added.

Donnelly said the Assembly’s version is “a great idea,” but noted that he would oppose the Senate’s version if it moves forward as the main mining tax proposal because “the status quo would be better than giving the mining industry a bunch of free political capital.”