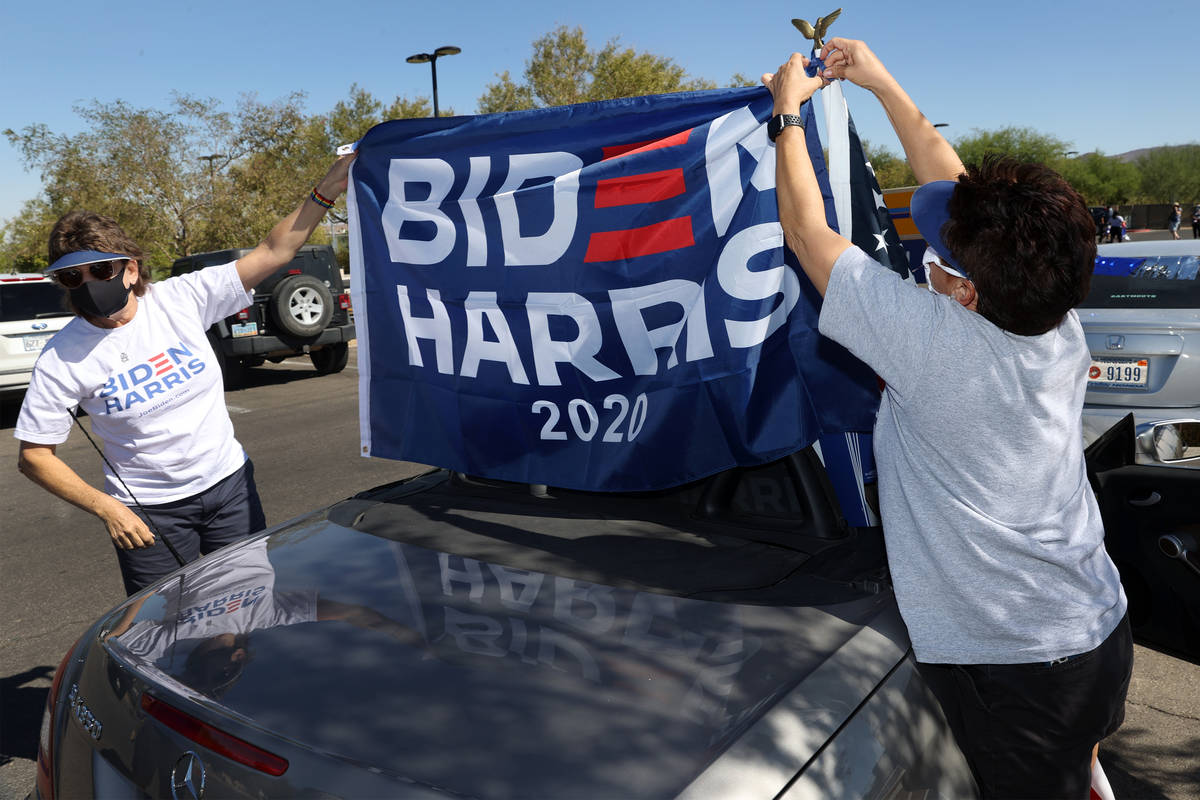 Gwen Leonard, left, and her wife Mercy Leonard, put up a flag in preparation for the ballot drop off parade at Heritage Park in Henderson, Tuesday, Oct. 13, 2020. (Erik Verduzco / Las Vegas Review-Journal) @Erik_Verduzco 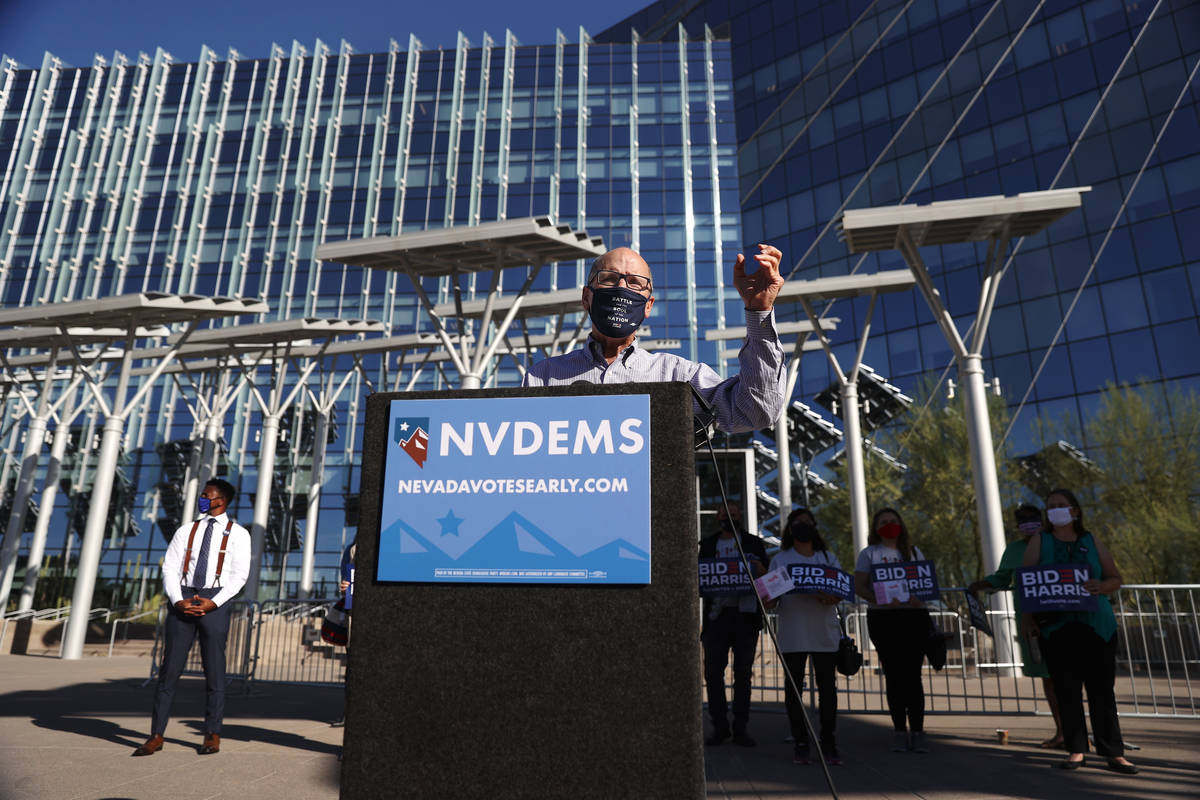 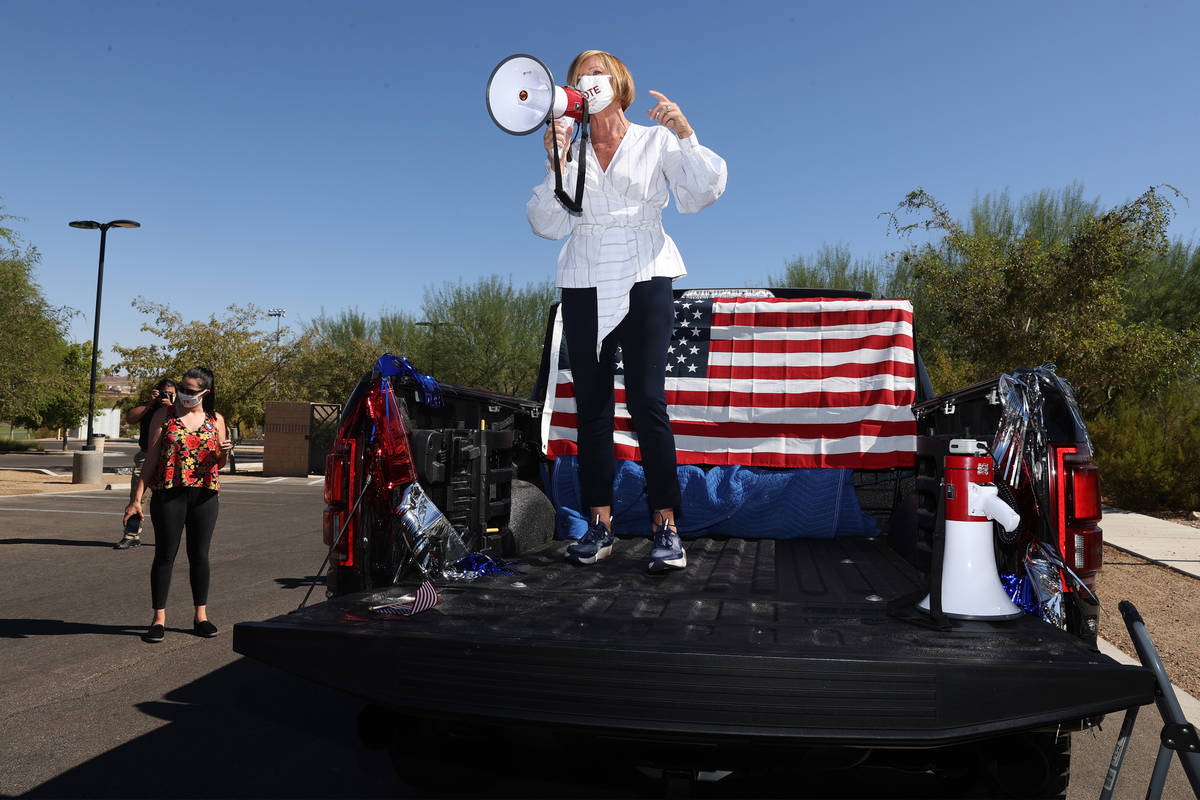 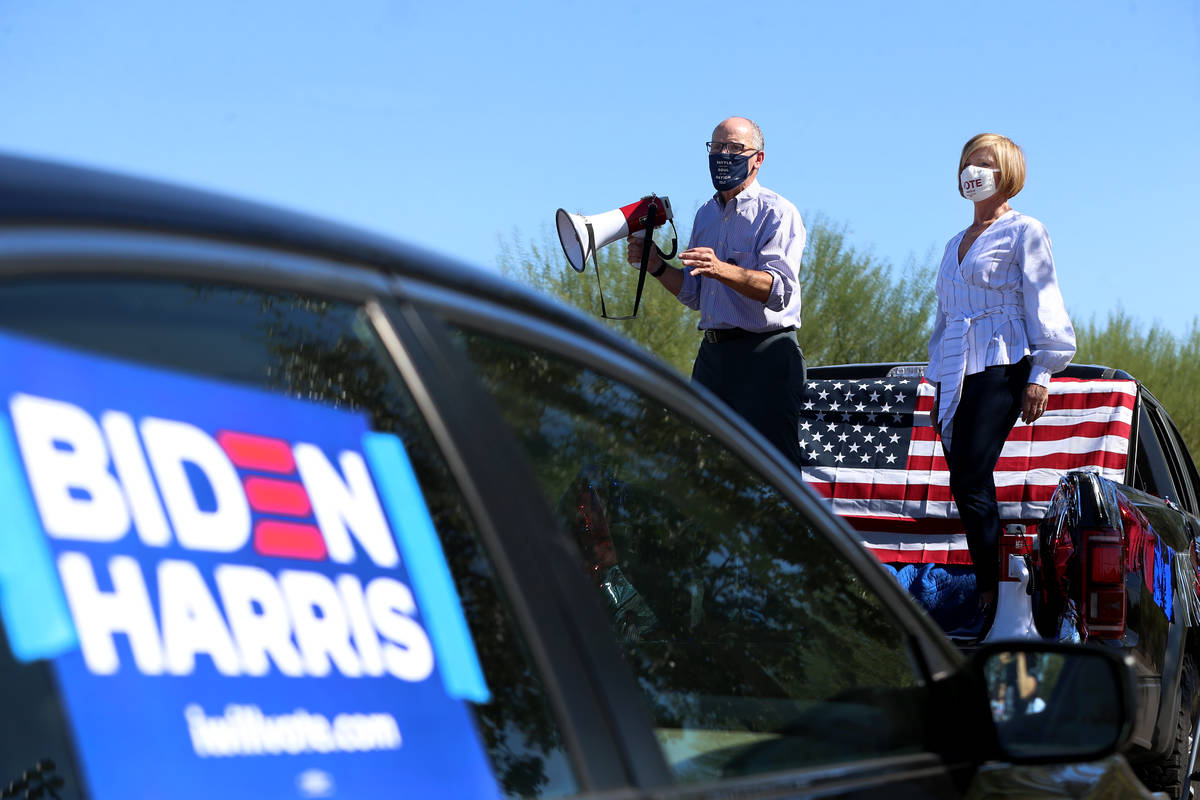 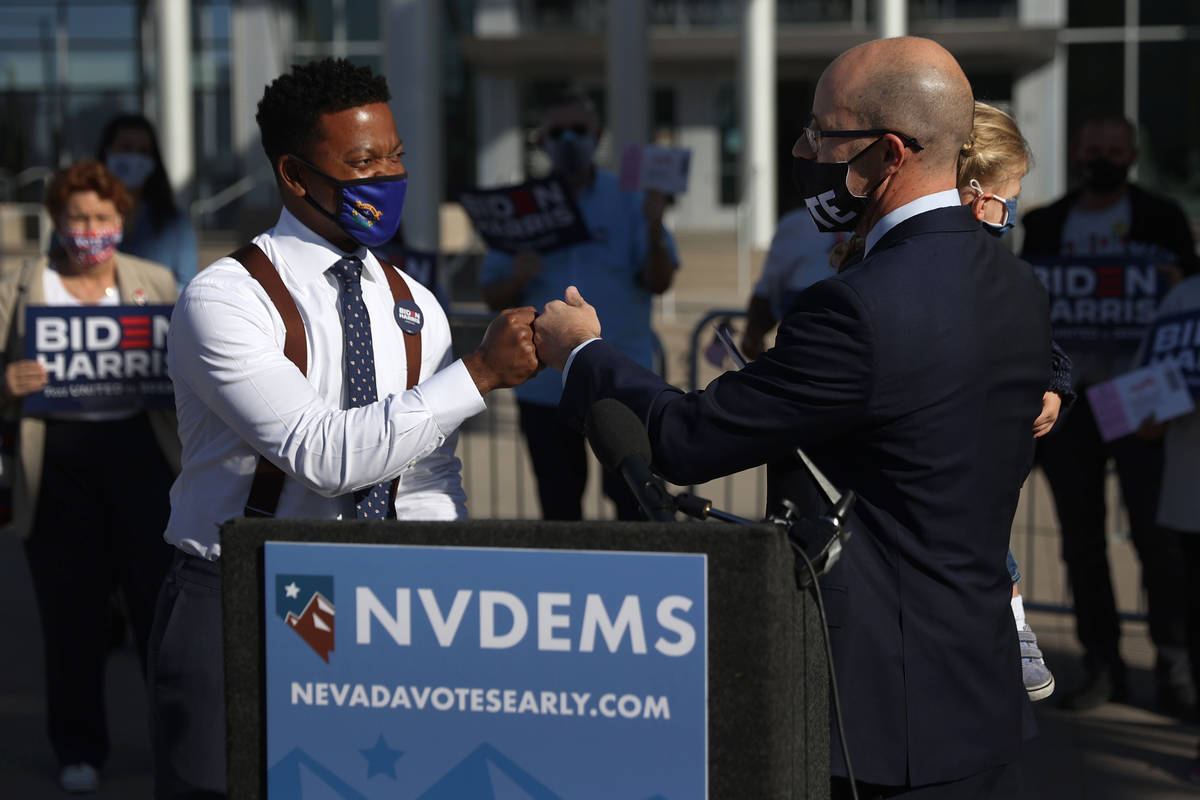 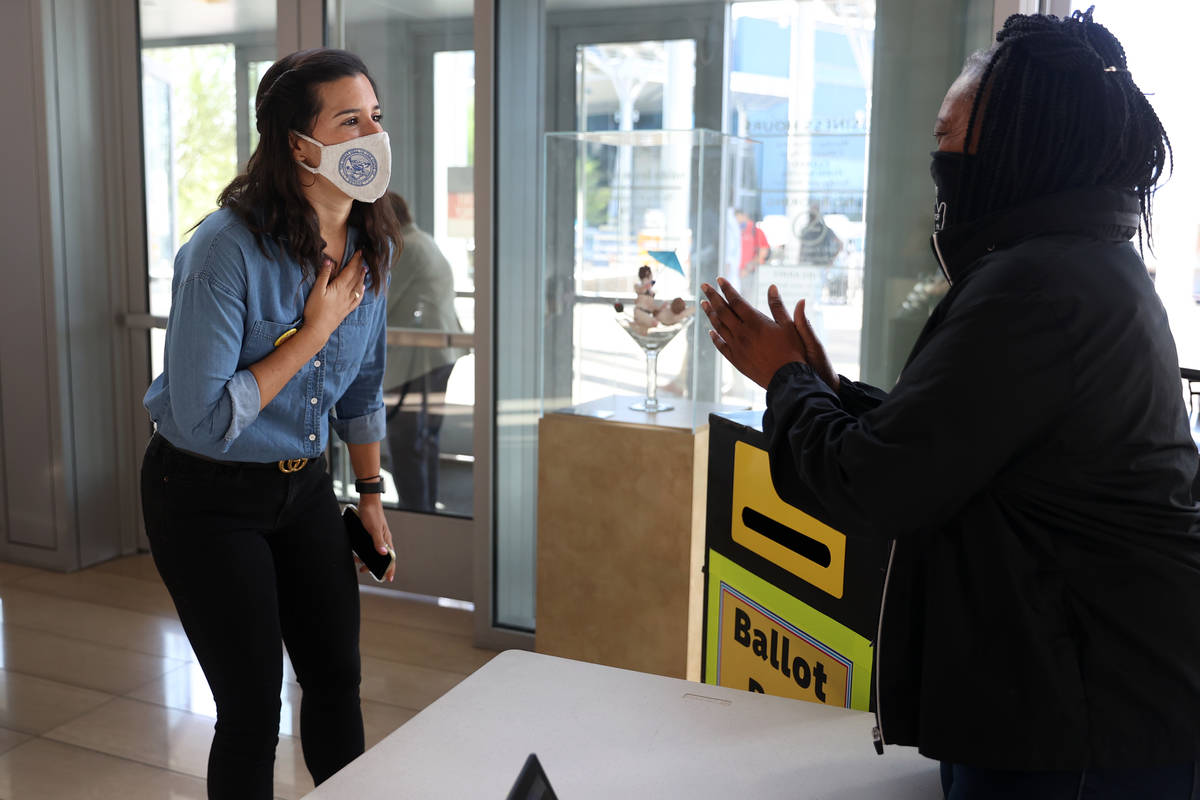 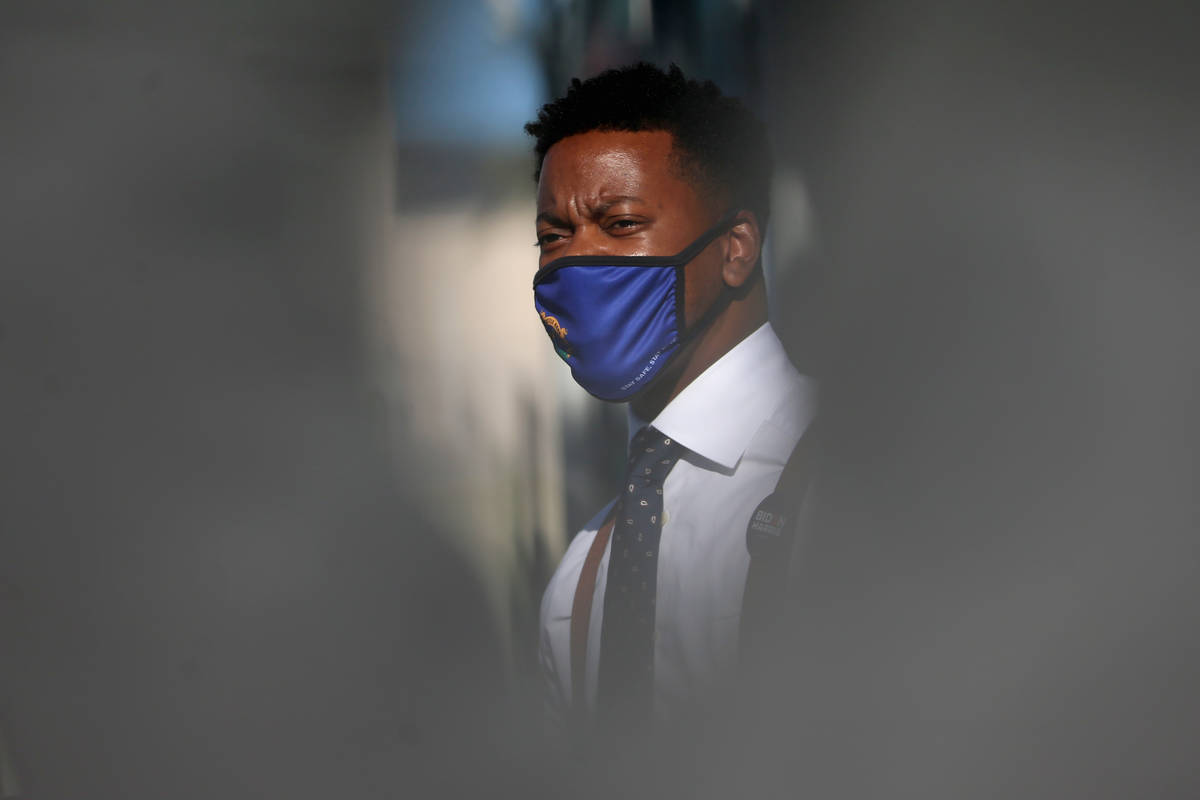 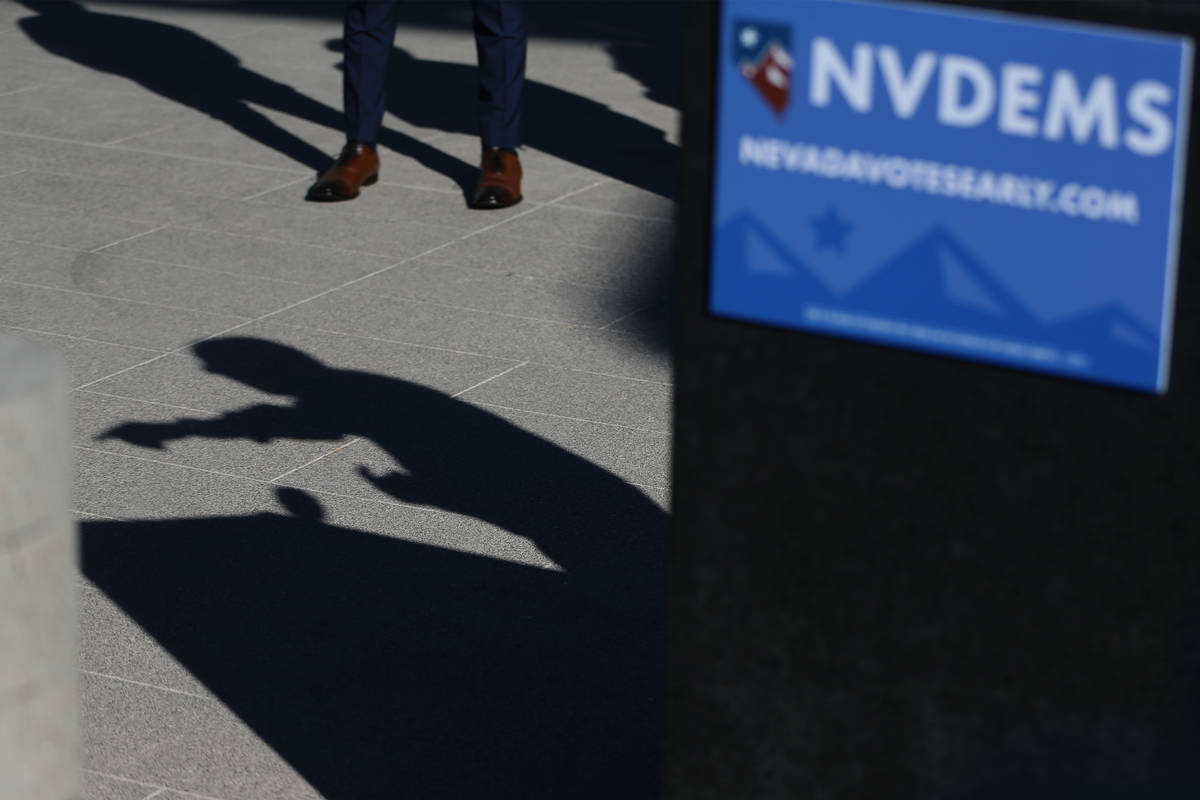 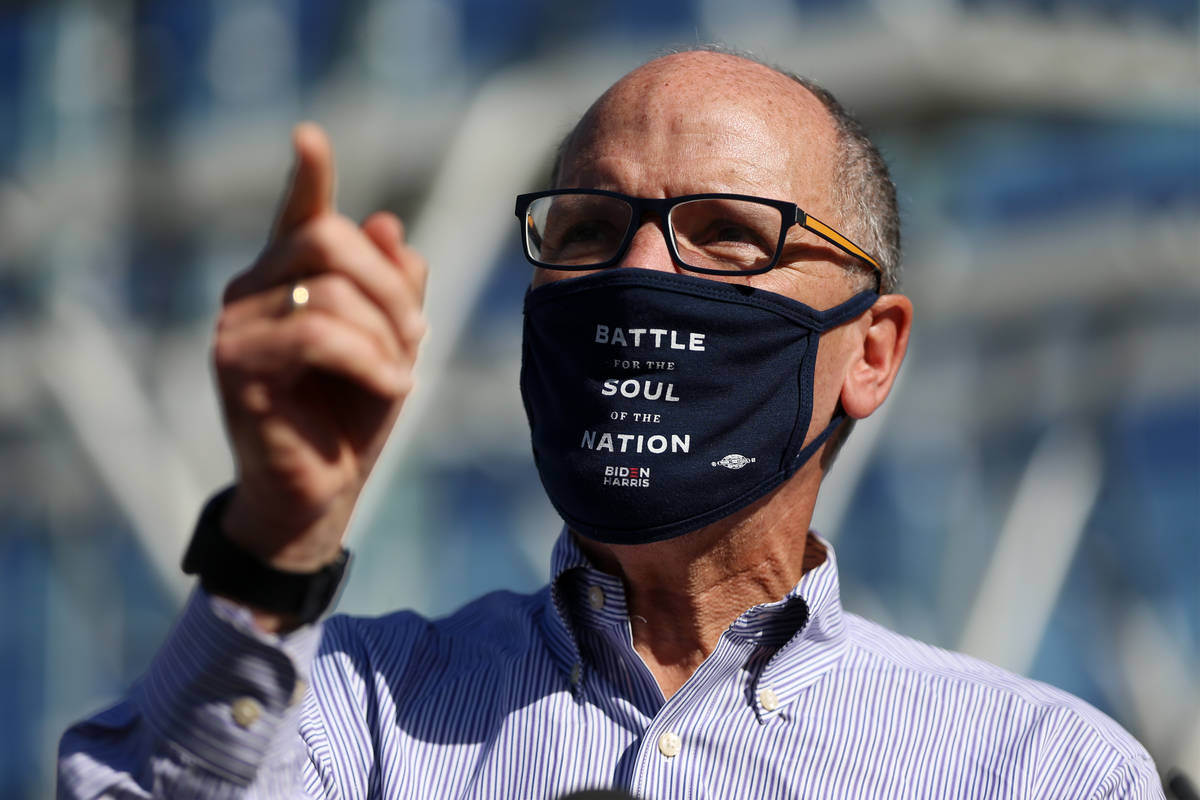 Tom Perez, the chairman of the Democratic National Committee, visited Las Vegas Tuesday to encourage voters across the valley to drop off their mail ballots and vote early.

At the City Hall event, a group of supporters from the Culinary Union 226 held Biden-Harris signs and cheered for the speakers.

“We’re all here to do the most important thing we’ll all be doing this election cycle, which is voting,” Cancela said at the City Hall event.

Residents may vote through mail, vote in person during early voting or drop-off their mail ballots in person at a designated location before Nov. 3, more information can be found at clarkcountynv.gov/vote.

“We should make it as easy as possible for every eligible person to cast their vote and to make that vote count. You have done that here in Nevada, with your reforms,” Perez said at City Hall. “People have options. That is really important when people have options on how to vote, guess what happens, more people vote.”

At the Henderson car parade, about a dozen cars decorated with red and blue streamers, Biden-Harris and Susie Lee posters and American flags made their way from Heritage Park to the Henderson City Hall mail ballot drop-off site.

“We are leading the way here today to make sure we demonstrate to everyone and they can get out and vote. They can vote early, they could vote by mail they can drop off like we’re doing it today,” Lee said. “And obviously, vote in person when we start early vote on October 17.”

Perez focused on health care, the economy and unemployment, issues that are prevalent in Nevada during the pandemic.

Trump Victory spokesperson Keith Schipper stated in response to Perez’s visit to Nevada that the Trump campaign and Republican National Committee have had a “permanent presence in the Silver State, helping us connect with nearly 3 million voters, to turn Nevada red in November.”

Schipper noted the Trump campaign has had staffers in Nevada since 2016, has contacted nearly 3 million voters and has held more than 2,000 events. Trump himself was set to return to Nevada Sunday for campaign events at both ends of the state.