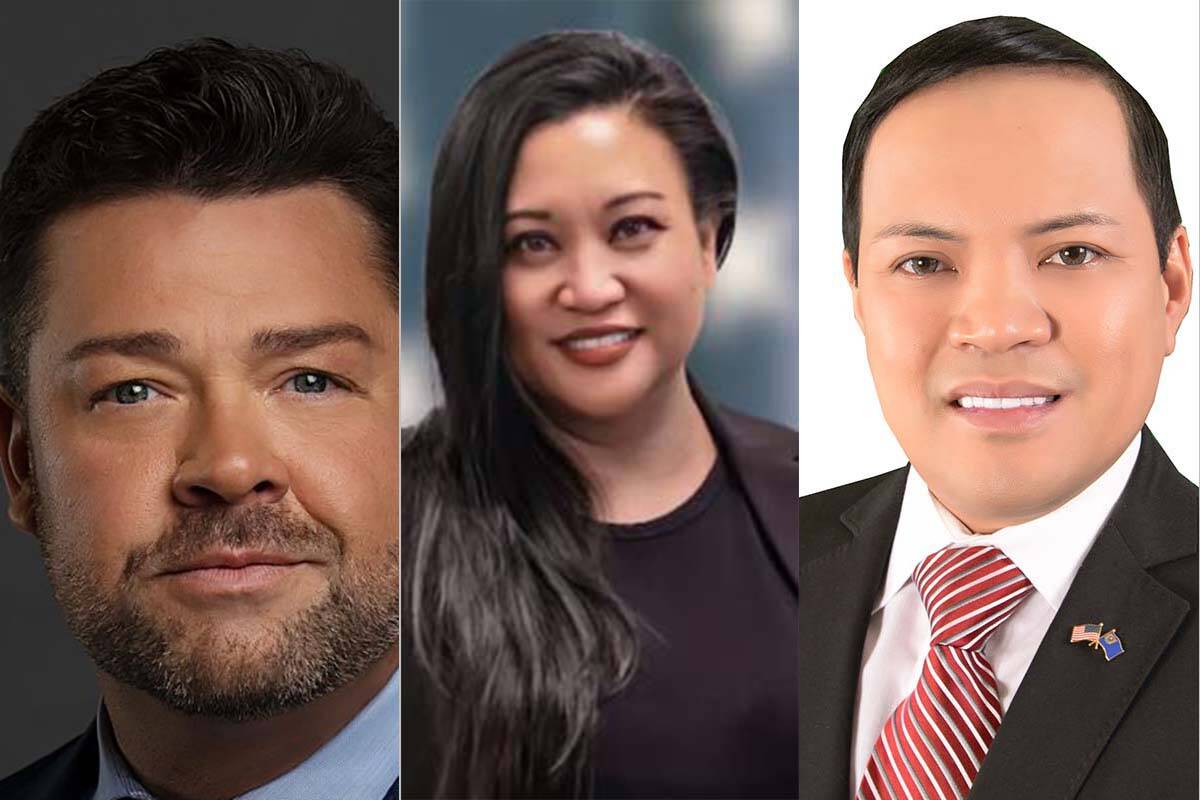 A doctor, an educator and an accountant will square off in the Republican primary election to unseat an incumbent assemblywoman in District 21.

Jon S. Petrick, Rachel Agatep Puaina and Ron Q. Quilang are the candidates for the Republican nomination. The winner of the Republican primary election race will face incumbent Democratic Assemblywoman Elaine Marzola in the general election.

Petrick, a licensed chiropractic physician, is the CEO and clinical director of the Las Vegas Pain Relief Center in Henderson.

As a physician, Petrick’s top priority is for health care.

“The current healthcare system only cares about one thing: maximizing profits,” he said.

He wants to legislate a $6,000 tax credit to individuals who manage their own healthcare and don’t use the current system. The legislation would include health care facility memberships including gyms, yoga, and martial arts programs, alternative medicine visits including chiropractic or acupuncture, as well as nutraceutical supplementation.

He also believes Nevada lawmakers should properly fund the state’s Education Savings Account program that can provide tax savings and provide around $6,000 to spend on education options.

Petrick wants to encourage the development of local businesses and making Nevada a corporate destination for business by improving the state’s tax structure and implementing sensible zoning laws.

“Even moderate corporate headquarters can attract thousands of jobs and boost economic activity while increasing the tax base,” he said.

Puaina, a four-year Nevada resident who moved to Henderson to take a job with the Clark County School District, became disillusioned with government overreach in the classroom and ultimately quit her teaching job.

“When the pay was more comparable to California schools, I decided to finally take a leap and move out to Las Vegas,” Puaina said. “I read that teachers had a usual turnaround rate of about two years in CCSD; after what I went through in CCSD, I could see why. I often tell people that teaching in Compton was a dream compared to CCSD.”

She supports balancing power in the Legislature by electing Republican candidates. She believes her personable attitude will help win votes against her primary opponents.

Legislators, she said, should not pass laws about how to run a classroom, which is why she opted to run for an Assembly seat instead of the school board.

She embraces Republican values and takes a pro-life stance after she faced with a difficult decision of whether to terminate a pregnancy. She didn’t.

“When I look at my twin daughters right now – they’re both ironworkers – I choke up thinking about what I almost did,” she said.

As someone with a front-row view of taxation, Quilang, who has built his accounting business over 20 years, wants to eliminate the state’s excessive spending, earmark spending and gubernatorial mandates.

“While death and estate taxes, a capital gains tax, alternative minimum tax, and double taxation on corporate dividends do not exist in Nevada, that is what the Democrats are pushing for and I will oppose and stop this from coming to Nevada,” he said.

Quilang wants the state government to be more transparent with its general fund, which he calls “a slush fund that makes it impossible to track where your taxes and fees collected in Nevada are going.”

Quilang said he would oppose mail-in ballot initiatives with the exception of military absentee ballots.

“Automatic voter registration through the Department of Motor Vehicles makes no sense to me as there is currently no requirement to prove U.S. citizenship and that is unconstitutional,” he said. “Only U.S. citizens should be able to vote.”

Quilang favors educational reform and would work to remove U.S. Department of Education curricula mandates. He also supports educational savings accounts to give families better choice in schooling and opposes sex education in public schools, believing that to be a parent’s responsibility.