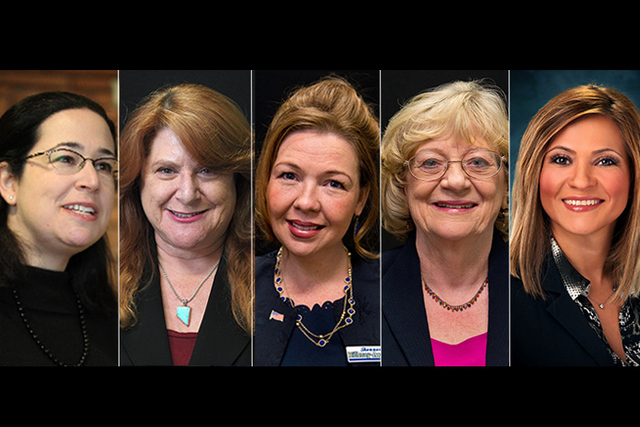 CARSON CITY — A national political group is launching an effort to turn both the Nevada Senate and Assembly to Democratic majorities by focusing on six women candidates in the two chambers.

EMILY’s List announced last week its “Focus 2020” program highlighting Nevada as a top target for Democrats to take control of the legislative chambers in advance of redistricting in 2021.

Focus 2020 is designed to elect pro-choice Democratic women to governors’ seats and state and legislative chambers in the 2016, 2018 and 2020 elections. The group is focusing on 14 states.

By electing more Democratic women to legislative and gubernatorial offices, EMILY’s List is seeking to influence the redrawing of political boundaries in 2021 and “fight back against the Republicans’ anti-woman efforts to roll back women’s access to health care that we’ve seen in state legislatures in recent years.”

The redrawing of political boundaries, called redistricting, occurs after every 10-year census. The next census is in 2020.

While Nevada Democrats are working to flip both houses, their Republican counterparts are fighting just as hard to retain control to capitalize on having the popular GOP Gov. Brian Sandoval in the Governor’s Mansion for the 2017 legislative session.

Party turnout in the general election is expected to be the key for the many Nevada down-ballot races. Democrats have an active voter registration advantage through July 31 of 537,153 to 464,766 for Republicans. There are also 262,417 nonpartisan voters and smaller numbers of minor party voters.

Republicans control the 21-member state Senate by an 11-10 margin. There were five women in the Senate in the 2015 session, three of them Democrats.

Republicans controlled the Assembly for the first time in decades in 2015 with a 25-17 majority, although the GOP majority is viewed by most political observers as threatened in the Nov. 8 general election.

Democrats need to take five seats now held by Republicans to reclaim the majority they have held in the Assembly for most sessions since 1985.

Sixteen members of the Assembly in 2015 were women, with nine of those Democrats.

Senate Democrats hope to regain control by winning the open District 6 seat in Las Vegas, which was held by a Republican who is not seeking re-election. The race pits Republican Victoria Seaman, a member of the Assembly, against Democrat and political newcomer Nicole Cannizzaro, a deputy district attorney with the Clark County district attorney’s office.

EMILY’S List is endorsing Cannizzaro as well as incumbent Democrat Joyce Woodhouse, who is running for another term in Senate District 5 in Henderson.

The group has also endorsed four Democratic women running for the Assembly: Lesley Cohen, Shannon Bilbray-Axelrod, Sandra Jauregui and Ellen Spiegel. Spiegel is the incumbent in District 20 in Henderson. Cohen is trying to win back the District 29 seat she held in 2013. She lost in the 2014 general election to Republican Stephen Silberkraus, who is running for re-election.

“The path to taking back control of the Nevada Legislature runs through EMILY’s List women,” said Lucinda Guinn, vice president of campaigns for EMILY’s List. “Nicole, Joyce, Lesley, Shannon, Sandra, and Ellen are champions for Nevada women and families who will stand up to Nevada Republicans’ anti-woman agenda and will ensure that women’s voices are heard in the redistricting process. Through electing these women we will ensure that Nevada’s state legislative districts are truly representative of all Nevada families.”

EMILY’s List has raised over $400 million to support pro-choice Democratic women candidates since its founding in 1985. The political action committee, an acronym from the phrase “Early Money is Like Yeast,” says it has helped elect over 100 women to the House, 19 to the Senate, 11 governors and over 700 candidates to state and local office.