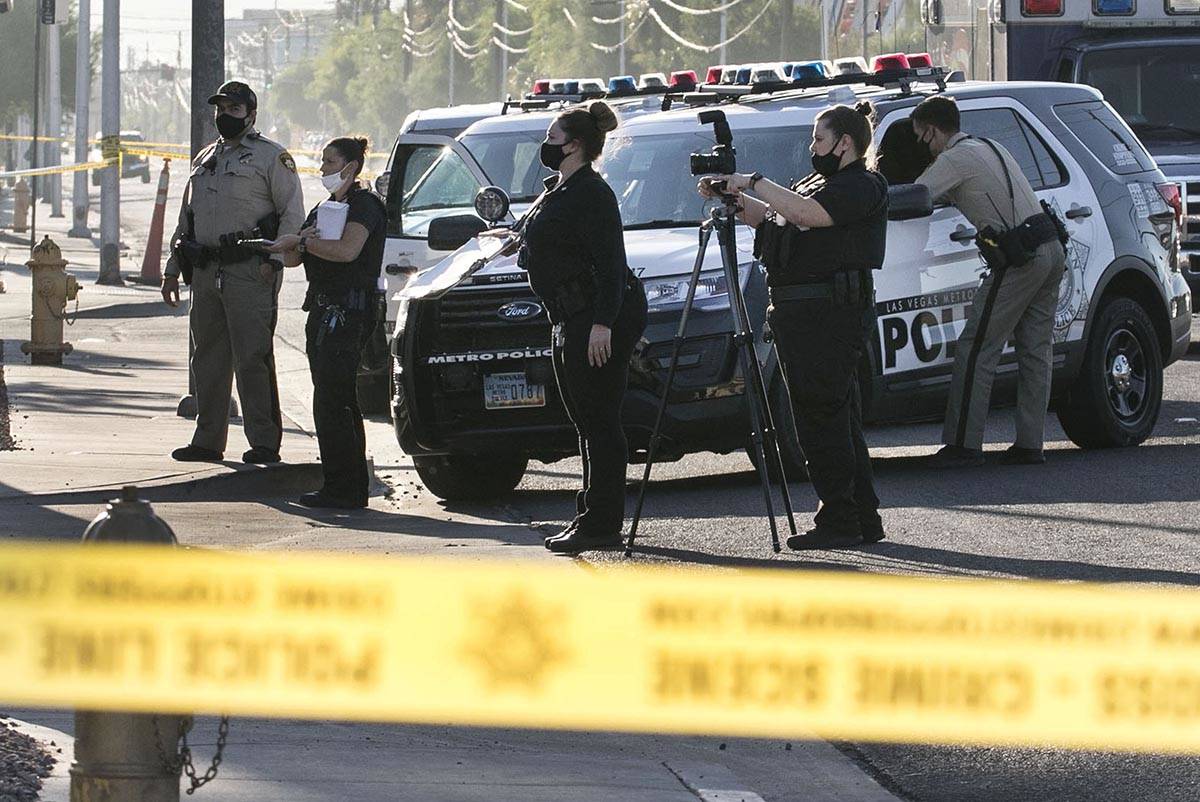 The Metropolitan Police Department investigates a shooting in the parking lot of the Kensington Suites apartments, 2200 W. Bonanza Road, on Friday, Aug. 7, 2020, in Las Vegas that left one man dead and two others hospitalized. A new report says shootings are the leading cause of death for people ages 15-24 in Nevada. (Bizuayehu Tesfaye/Las Vegas Review-Journal) @bizutesfaye

Nevada legislators could curb firearm violence by banning assault weapons, requiring a licensure process for gun ownership and addressing several other “gaps” in state gun laws, according to a new report authored by state and national progressive groups.

The report was written by Institute for a Progressive Nevada Executive Director Annette Magnus and Chelsea Parsons, vice president of gun violence prevention at the Center for American Progress. The institute is the nonprofit arm of Battle Born Progress, the local advocacy group Magnus also leads.

“This report suggests several policies that we believe establish a clear long-term plan for the Legislature and the governor to consider and enact this session and over the next few years,” Magnus said in a statement.

While the state has made progress in gun violence legislation over the last few years, the authors note Nevada’s gun death rate and gun suicide rate remain 40 and 60 percent higher than the national average.

The proposed changes, if taken up by the Democrat-controlled Legislature, would probably see immediate opposition from state Republicans and pro-Second Amendment groups.

Assemblyman Jim Wheeler, the Minden Republican and a former law enforcement officer, said Americans have a right to bear and buy arms that is not granted by the government but protected by it.

“Anything that abridges a constitutional right is a nonstarter,” he said when asked if Assembly Republicans would consider any of the report’s recommendations. “It’s just that simple.”

“Obviously, we would fight this with everything we have,” he added.

The report claims this law was enacted in 2007 after unrest following Hurricane Katrina and remained largely unused until the COVID-19 pandemic, which saw a surge in first-time gun ownership.

“From March 2020 through September 2020, Nevada has accounted for more than 128,000 background checks requested through the FBI’s national background check system,” it reads.

First-time gun owners may lack training in how to use or store firearms, and having a gun increases the likelihood of a shooting death in the home due to accidents, suicide or domestic violence, the authors said.

The report notes the Legislature made some progress in this area by banning bump stocks, which mimic fully automatic fire. One such device was used in Las Vegas during the 2017 Route 91 Harvest festival shooting, which killed 60 people and injured hundreds.

Universal background checks were also praised, but the authors said Nevada could go further by requiring a license to own a gun.

According to that report, Connecticut saw a nearly 28 decrease in gun homicide rates after passing such a law, while Missouri saw its shooting death rate increase by 47 percent after repealing its gun licensure law.

Nevada legislators should also prohibit a person convicted of any charge with a hate crime enhancement from owning guns.

“With the onset of the pandemic and the reckoning with white supremacy our country is going through, new gun safety challenges have presented themselves,” Magnus said.

Nevada should also ban the sale of “ghost guns,” meaning partially disassembled gun kits that can be reassembled with little expertise and thus used to get around serial number tracing.