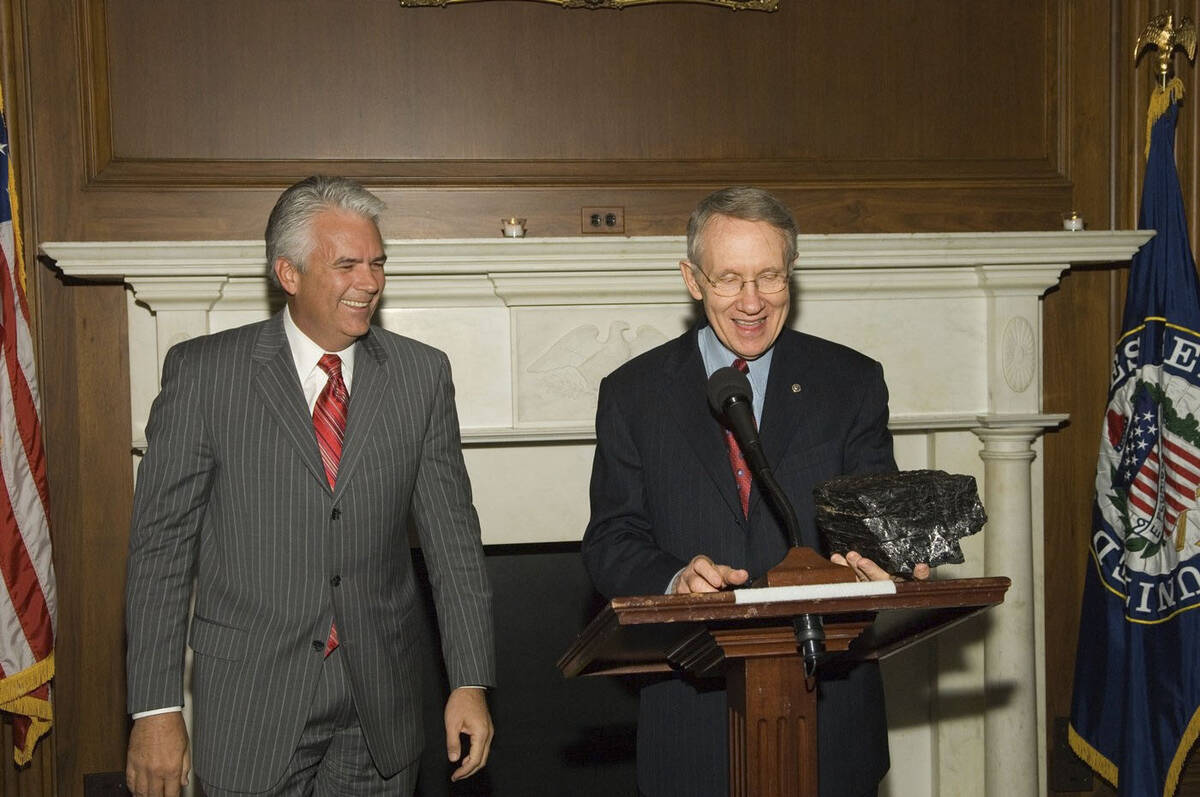 Sen. John Ensign, R-Nev., left, shares a laugh with Senate Majority Leader Harry Reid, D-Nev., after Ensign presented Reid with a symbolic piece of coal during during the annual holiday party the two Nevada senators hold for their staffs on Dec. 5, 2007, in Washington D.C. (U.S. Senate) 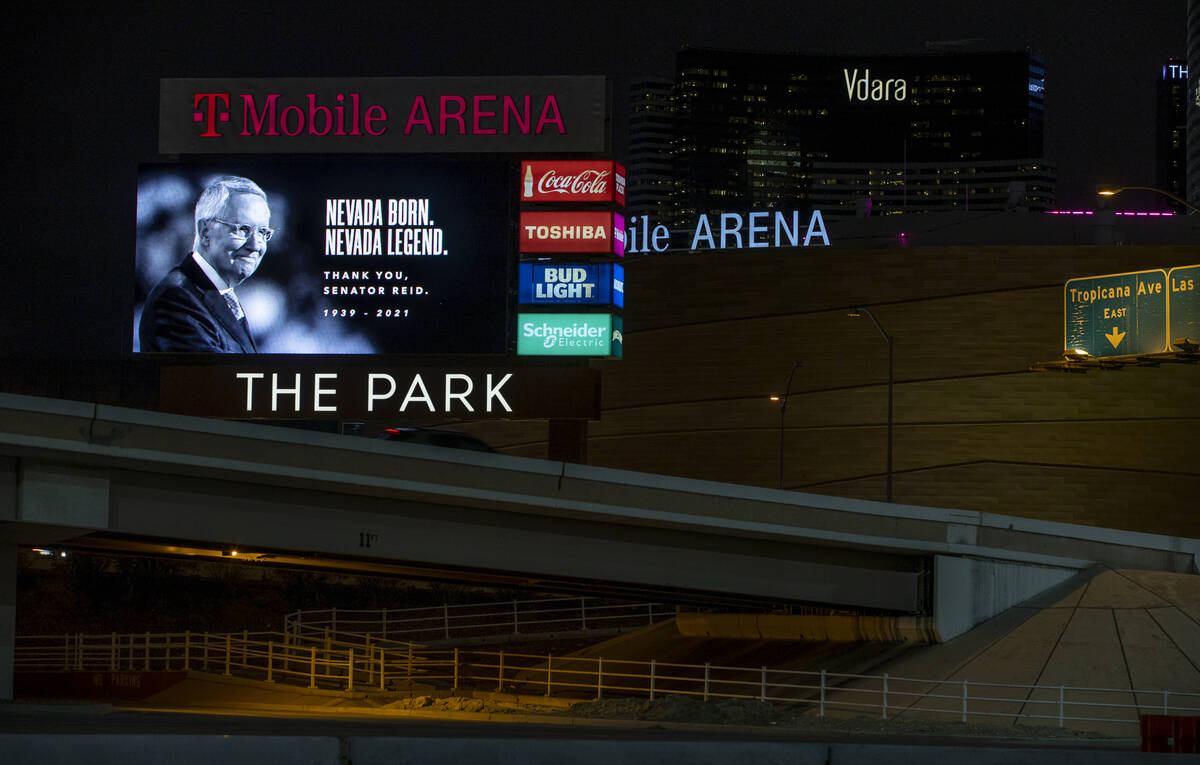 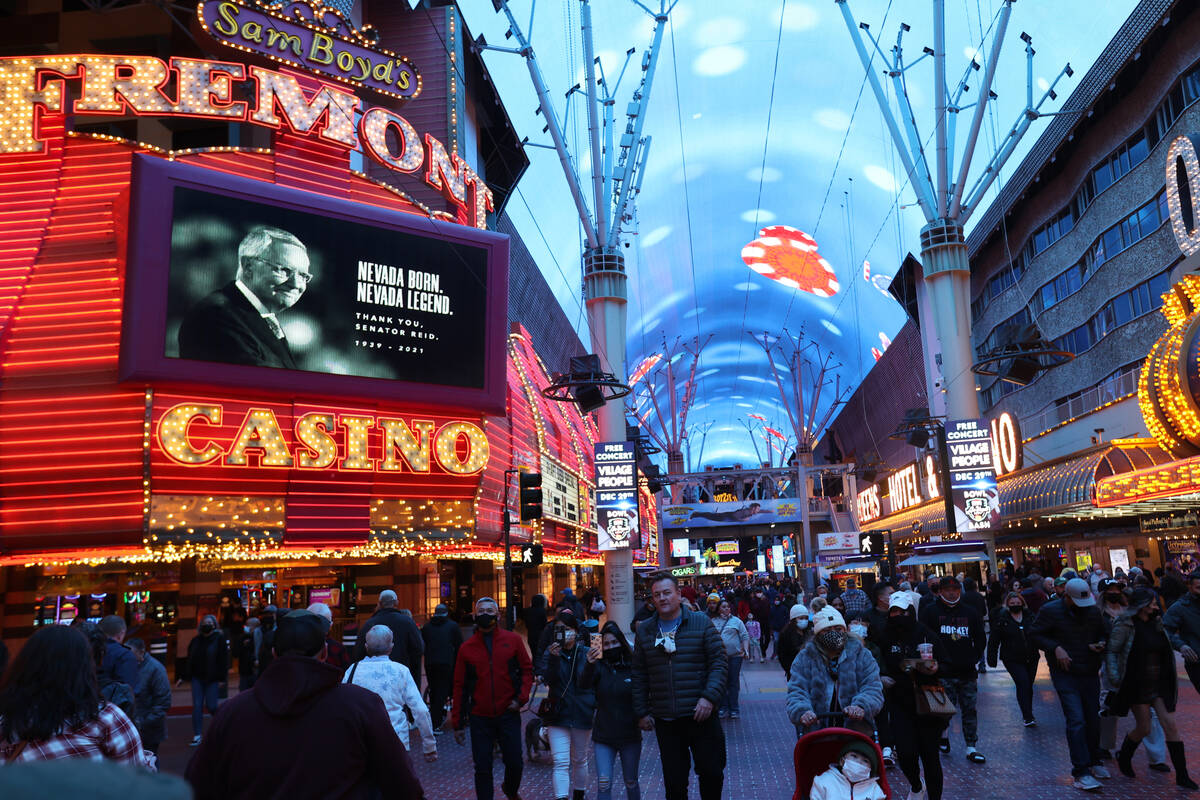 Former U.S. Sen. Harry Reid is shown a video board on the Fremont at the Fremont Street Experience Wednesday, Dec. 29, 2021, in downtown Las Vegas. It was was part of a citywide marquee takeover honoring NevadaÕs longest serving senator. (K.M. Cannon/Las Vegas Review-Journal) @KMCannonPhoto

John Ensign came within 401 votes of ending Harry Reid’s career in the U.S. Senate in 1998 after a bitter campaign.

But after Ensign won Nevada’s other Senate seat two years later, the two didn’t let politics get in the way of their friendship.

They were opposites politically, but that’s where the friction ended. Despite their differences, the two were good friends who had an agreement to never criticize each other publicly or privately, a well-known “non-aggression pact” that confounded Democrats and Republicans.

“So we allowed each other to have those differences without doing personal attacks on each other,” Ensign said Wednesday.

Reid, the most powerful Nevadan to ever hold office in Washington D.C., died Tuesday after a long battle with pancreatic cancer. He was 82.

When Ensign resigned from office after an extramarital affair in 2011, the two stayed in touch. Reid would call his former colleague and tell him he missed him.

The key to Ensign and Reid keeping their relationship healthy was having their staffs get along and work together, Ensign said.

“And I think that’s a lot of what’s missing in Washington today, is being able to disagree, fundamentally, vehemently disagree on philosophical issues, but yet not get personal,” he said.

People would often ask Ensign how he could stand Reid, who had made enemies throughout his career, especially among Republicans.

Ensign told them Reid was a good person. A good father. A good husband. They just disagreed politically.

And if Reid was working on an issue, he knew how to get it done, Ensign said.

“He knew the parliamentary rules of the Senate better than anybody, and he used them to his advantage,” he said.

An adviser to Democrats

Reid’s narrow victory over Ensign in 1998 changed things for him back in Nevada, recalled former U.S. Sen. Richard Bryan, who served alongside Reid in the Assembly and in Washington.

“Reid had a near-death experience running against John Ensign, and he took that to heart, and he decided that he would, in effect, establish the mechanism for party control and how elections could be won,” Bryan said.

It was a process for Reid to call the shots, and it was highly effective, said Bryan, a longtime friend of Reid’s.

“That machine continues to function today, and basically, it was a creation of Harry Reid,” he said.

Ensign said Nevada Democrats owe Reid for his work rebuilding their party. But that work was thrown into disarray this year, when a slate of progressives took over the state party, prompting the Reid-aligned staff to quit and later form a new group — Nevada Democratic Victory — to ensure party business got accomplished.

One of the Democrats to benefit from the political structure Reid built was Gov. Steve Sisolak, who met Reid as a university regent 20 years ago. Through the years, they became closer friends.

Sisolak said Reid was someone he went to for advice when he needed help. When Reid had someone on the phone, they were the most important thing he was dealing with, even when he was carrying the weight of leading the Democratic Party in the U.S. Senate, Sisolak said.

The governor said he doesn’t know who is going to take on Reid’s role of adviser to Nevada Democrats.

“Somebody’s going to follow in his footsteps, but nobody can fill those shoes,” he said.

Bryan said Reid had a great sense of humor that many never saw.

“And we did things particularly in the 1969 Legislature when we were two young guys going up there, and probably may have been a little obnoxious,” Bryan said. “We were the quintessential young guys that were in a hurry, but we had a lot of fun.”

Bryan said Reid was not particularly charismatic, a great orator or a fan of retail politics. But he was a laser-focused strategist who worked harder than anyone else to reach his objectives, the former senator said.

It was Reid’s work on immigration reform that inspired Astrid Silva to form Dream Big Nevada, an organization dedicated to advocating for immigrant rights.

In 2009, Silva wrote Reid a letter expressing the pain she felt for not being able to be with her grandmother at the end of her life because she was undocumented. Reid soon became an ally of Silva’s.

“He always believed and supported that there could be a path forward for undocumented families, and I wanted to contribute to the work that he was doing,” Silva said.

Reid is the reason she decided to pursue her work in advocacy, she said.

Reid himself was a poor kid from the middle of the desert. He grew from humble beginnings in Searchlight to lead the U.S. Senate, where he played a critical role in blocking the storage of nuclear waste in Nevada and passing the Affordable Care Act, commonly known as Obamacare.

The first thing he taught Silva about policy was it is OK to fix mistakes.

“Because he told me that he had said bad things about immigrants before, and he didn’t understand it, and he was always upset about what he had done in the past,” she said. “But he told me, you always are able to learn more things and meet different people and expand outside of kind of your circle.”

In 1993, Reid gave a speech denouncing birthright citizenship on the Senate floor, a speech cited years later by then-President Donald Trump as justification for a wall along the southern border. Reid later called the speech his biggest regret in his career. After his 2010 re-election, Reid credited the Latino community for his victory.

The former senator became someone Silva could turn to for advice and encouragement. The name of Silva’s organization even came from the encouragement Reid would give her. He’d tell her to dream big.

Reid truly cared about people and had a way of showing it, Silva said. He was thoughtful and remembered the small details about people when telling stories. And in a career of public service that spanned decades, he touched many lives in different ways, she said.