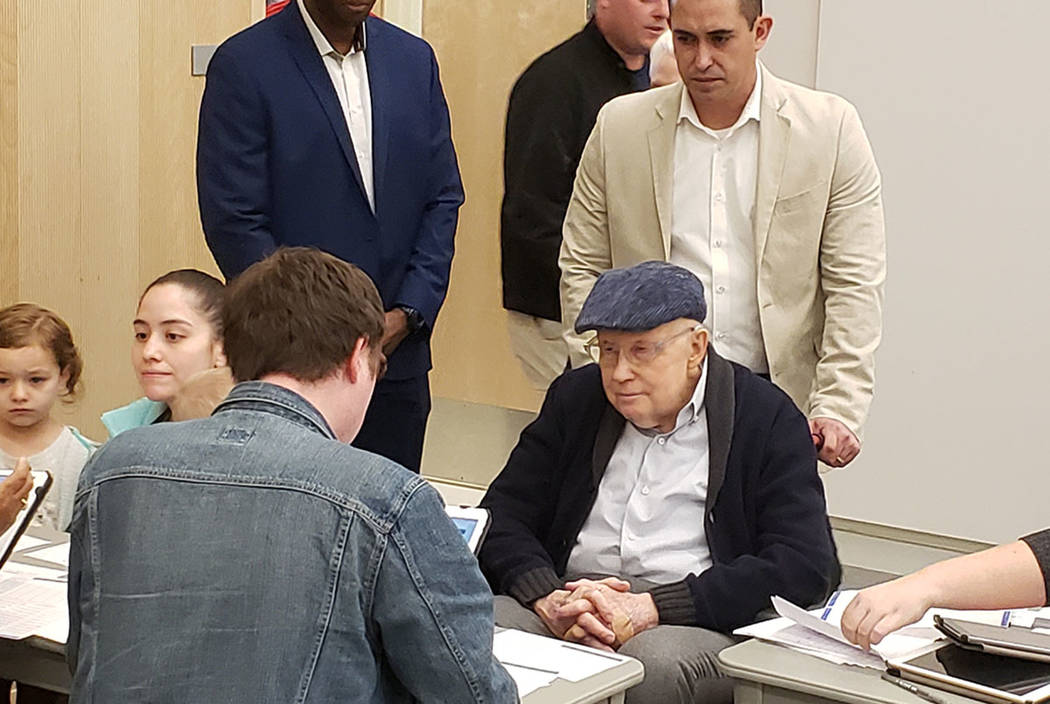 Former Senate Majority Leader Harry Reid gave his take Saturday on the state of the 2020 Democratic nominating process, slamming Iowa’s caucuses as a “debacle” and weighing in on most of the remaining challengers.

Reid filled out an early caucus preference card at the East Las Vegas Library before speaking to the news media.

He voted “uncommitted” for all three of his preferences, saying he had many friends in the race and would not consider backing a candidate until after Super Tuesday.

“The (early voting) program’s going to make Nevada look good,” Reid said. “We’re going to have a great early vote, and I think the country will look to us in the future. I think in the future, as many pundits have said, we’ll be the first state to have a primary.”

Reid said he believes the failures of the Iowa caucuses will not repeat themselves in Nevada. However, he said that after the Super Tuesday states vote in March, the party will consider whether it should change to a primary system.

Reid said he expected the crowded field — there are still seven Democrats polling in double-digits in different parts of the country — would narrow soon, as candidates lose steam or run out of money.

He cautioned that sometimes it works out for candidates staying in the race despite an apparent lack of support.

Asked whether he agreed with other senators saying a Sen. Bernie Sanders nomination would hurt down-ballot candidates, Reid defended his former Senate colleague.

“I care a great deal about Bernie Sanders,” Reid said. “He has gotten to where he has by having people support him, and so I’m not going to be critical of Bernie Sanders. All the polls show that if he does become the nominee, he will beat (President Donald) Trump.”

Reid said it is also too early to rule out his longtime colleague and former Vice President Joe Biden.

“Iowa and New Hampshire are not representative of the country,” Reid said. “He’s going to do well in Nevada. He’s going to do very well in South Carolina. So people should not be counting Joe Biden out of the race yet.”

Reid said there are some valid criticisms of former New York Mayor Michael Bloomberg, but Reid called him a “good mayor.”

“No one in the country, no one, has done more on guns and climate than Mayor Bloomberg,” he said.

Asked whether the Democratic Party was heading toward a contested national convention, Reid said he did not think so.

“It’s not unforeseen that we could have three people with 30 percent of the vote,” Reid said. “But I think it will all work out. I really do believe that we have to be united. And I think that some people when they do have 30 percent will see if they can do any better and could be dropping out so that we have somebody with the majority vote.”