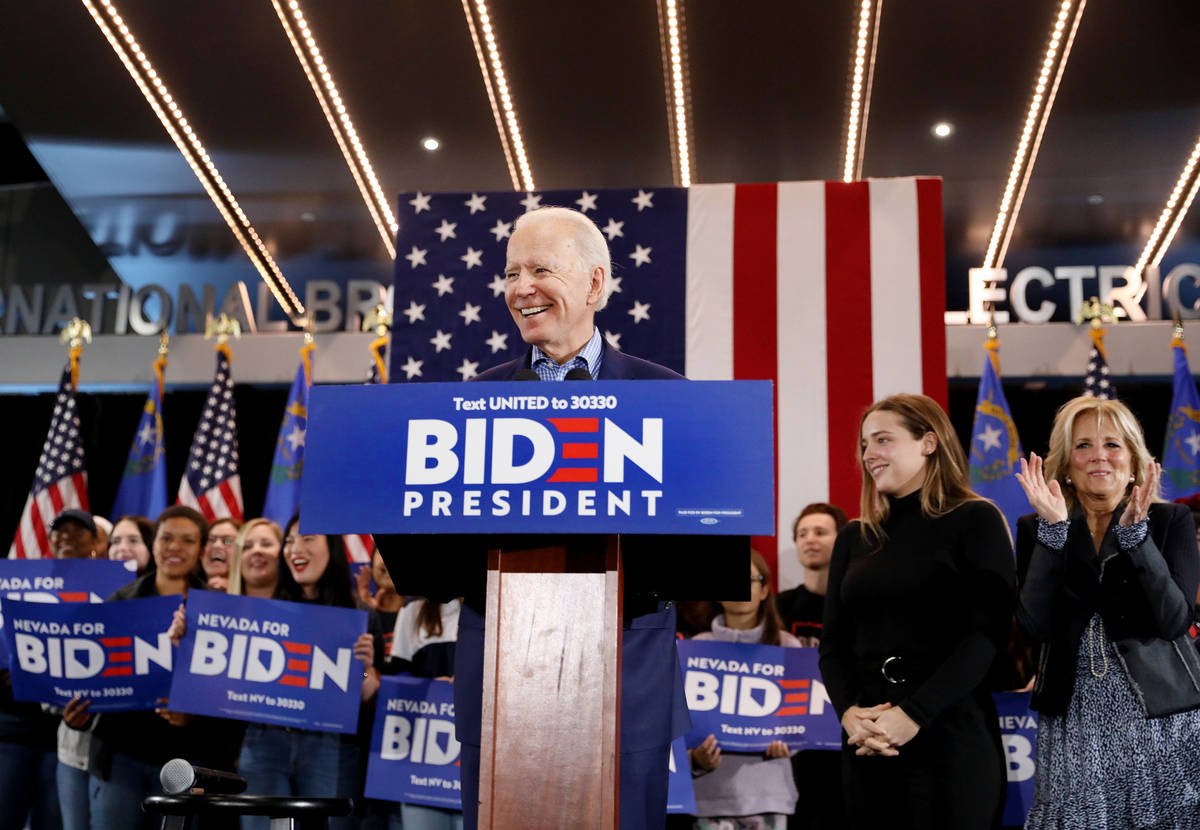 Former Vice President Joe Biden headlined a packed lineup of Democratic leaders who remotely addressed the Nevada State Democratic Party’s state convention on Saturday, as the party gears up for a five-month dogfight to maintain strong support ahead of the November general election.

“You know better than I do Nevada is an important battleground state for our campaign in 2020,” Biden said to a Facebook Live audience, which peaked at about 200 viewers. “And we have to do everything we can to make sure Democrats on the ballot across Nevada are successful this November.”

The convention moved to a digital format because of state standards regarding large events during the COVID-19 pandemic.

During his four-minute video remarks, the presumptive Democratic presidential nominee focused on Nevada’s Latino community, who he said was both a driver of economic growth and had helped elect Democrats across the state.

“The stakes of this election have never been higher in our country, so you have to work harder than ever,” Biden said. “We need to stand up as a nation — stand with black and brown communities — (and) come together as one America delivering justice for all Americans.”

Most of the speakers praised Nevada Democrats for electing the country’s first female-majority state Legislature and winning huge gains statewide in 2018.

Each touched on the turmoil faced in the country during the COVID-19 pandemic, particularly in Nevada, and civil rights unrest over police brutality against communities of color. Most took their turns to criticize Trump’s handling of current crises and voice support for Biden — typically in the same breath.

Trump’s campaign said in a statement that the president “is leading Americans through the pandemic and restoring law and order.”

“Nevadans want results, not Democrat platitudes, which is why they will deliver the Silver State for President Trump in November,” spokesman Keith Schipper said.

During the convention, Gov. Steve Sisolak thanked Nevada Democrats for their support and effort during the state’s reopening plan after COVID-19 closures, urging them to join in remote fundraising and voter outreach efforts while continuing to stay home as much as possible.

“At this critical time, all Americans, especially our leaders, should be sending a message of compassion and taking the time to listen,” Sisolak said.

The two former state attorneys general also highlighted the importance of flipping the Republican-controlled Senate to accomplish Democratic goals on policing, health care and beyond.

Sen. Jacky Rosen and former Senate Majority Leader Harry Reid also stressed this point, noting that electing Biden is essential to the Democratic cause but is not the whole picture.

Lee weighed in on topical issues, including her upcoming general election battle with newly minted Republican challenger Dan Rodimer and activist calls to defund police departments in response to the recent killings of unarmed black Americans in law enforcement custody.

“I don’t believe we should eliminate police departments, but I do think it’s time that we had conversations about how we allocate our resources,” Lee said.

Lee was complimentary of local law enforcement, including the Metropolitan Police Department.

As the 80 or so virtual attendees continued the conversation in the conference call’s written chat, she agreed with calls to demilitarize and root out racism within law enforcement.

Lee said she watched video footage of George Floyd, a black man whose killing in Minneapolis police custody sparked nationwide protests, and concluded it was murder. She said systemic racism is present in policing and other areas of society, such as education.

The congresswoman is not one of the 213 co-sponsors of the Justice in Policing Act of 2020. She said Saturday that she has spent the last two weeks meeting with activists and law enforcement to discuss the situation.

Lee also called for support in her campaign against Rodimer, saying her race is the most competitive on this year’s ballot and likely to draw big spending from Republicans. Since in-person campaigning may not be an option, she will rely on digital and phone work to retain the seat.

Horsford also called Floyd’s death a “murder,” adding that it required action from elected officials across the country.

“What I know is that people are so frustrated — they’re angry,” Horsford said. “They are tired of the unarmed black lives that have been taken … by law enforcement officials whose job it is to protect and serve, but, unfortunately, in many of these instances, have been in violation of human and civil rights.”

Horsford was an original co-sponsor of the Justice in Policing Act, which he told the audience would ban chokeholds, increase training, decrease militarization and create a national registry for police misconduct.

“This will actually help protect the officers who are doing their jobs well,” he said.

Results for the remote elections for the state party’s central committee and delegates to the Democratic National Convention were not available, as voting continued until Saturday night.