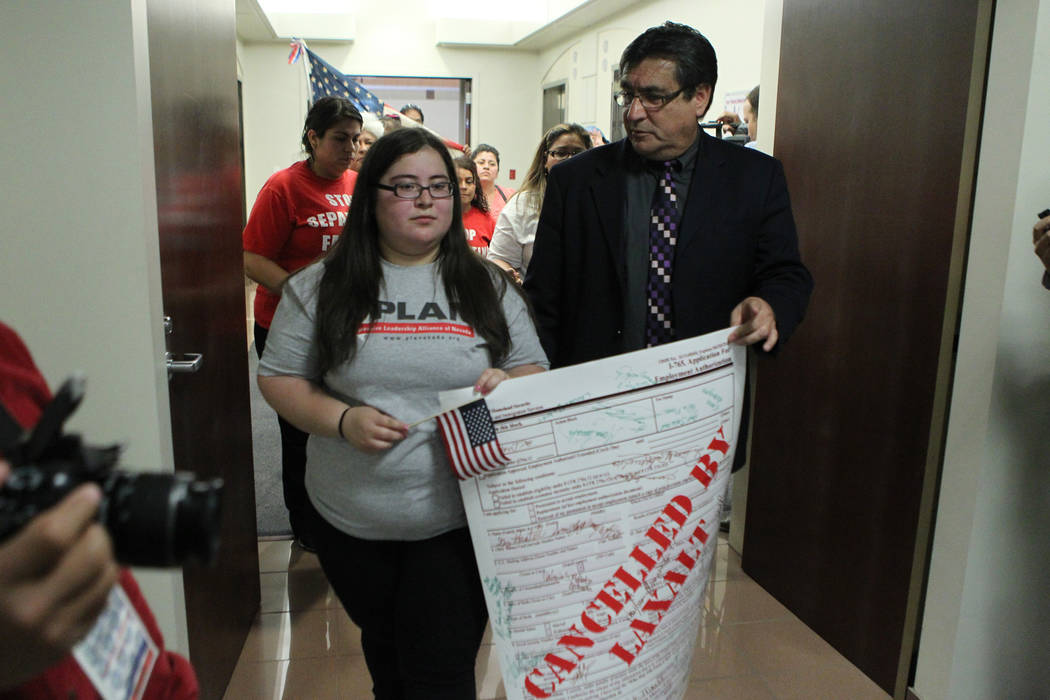 WASHINGTON — Latino leaders and civic groups launched a bilingual campaign Tuesday in Nevada and other states to register new voters and increase Hispanic participation at the polls this fall.

The goal is to register and nudge 150,000 new Latino voters nationwide to the polls in November, including 15,000 in Nevada, a swing state with a competitive U.S. Senate race, an open governor’s race, two open congressional seats and many state and legislative contests.

“The goal is not to elect Democrats or Republicans. It’s about building political power in the community,” said Ben Monterroso, executive director of Mi Familia Vota, a national civic engagement organization with operations in Nevada, Arizona, California, Colorado, Florida and Texas.

Monterroso and other Latino leaders unveiled the “USA Tu Poder” (Use Your Power) campaign during a news conference at the National Press Club.

Monterroso said more than 13,500 new Latino voters have been registered in Nevada over the past four years, and the campaign launched Tuesday aims to increase that number to 15,000 total.

The campaign in Nevada is focused on Las Vegas and Clark County, where the majority of the state’s registered voters reside, he said.

Latinos make up 28 percent of the state population, and 328,000 are eligible to vote, according to Pew Research Center figures from 2016.

But only 42 percent of Latino voters are registered to vote, compared with 81 percent of white voters, according to the Pew Research Center’s Hispanic Trends Project.

Latinos turned out in record numbers in 2016, but strategists say Hispanics are less likely to turn out during midterm elections.

The national USA Tu Poder campaign is designed to drive registration and participation. In addition to get out the vote efforts by Mi Familia Vota, a digital campaign involving Phone2Action and targeted advertising in English- and Spanish-language media will be used.

“You are an American, too. Use your vote,” Salinas says in the ads.

The campaign will use tech and social media platforms to reach younger, digital savvy voters.

While many politicians and challengers have their own campaigns to reach out to Latino voters, the USA Tu Poder campaign is relying on civic groups and community leaders to bring the message to the community, said pollster Matt Barreto of Latino Decisions.

Barreto said former Sen. Harry Reid, D-Nev., successfully rallied and energized the Latino vote in Nevada in his 2010 victory over Republican challenger Sharon Angle after she ran TV ads that depicted Latinos and immigrants in a negative light to energize conservative white voters.

Reid captured 90 percent of the Hispanic vote, compared to 8 percent for Angle, according to a Latino Decisions survey.

But the USA Tu Poder campaign is relying less on political campaigns to register and drive Latinos to the polls in favor of civic organizations and community leaders, regardless of party affiliation.

Barreto, who was a consultant for Catherine Cortez Masto’s 2016 Senate campaign in Nevada, said that unlike during the 2014 midterm election, more Latinos appear aware of issues central to the 2018 midterm election.

“We have never seen so much anger in our community,” Barreto said, adding that 86 percent of Latinos polled are opposed to the Trump administration’s “zero tolerance” policy that included family separations before the practice was scaled back due to public outcry and political opposition from both major political parties.

“It’s a very real thing,” Barreto said of the anger in the Latino community. He added that rhetoric about immigration and immigrants has further enraged Hispanic voters.

“Latinos are tired of these divisive attacks,” Barreto said.

A poll by Latino Decisions/National Association of Latino Elected Officials Educational Fund found that two-thirds of Latino voters said they plan to vote in the midterm election.

The poll was conducted Aug. 28 through Sept. 3 and contacted 500 Latino registered voters nationwide. The poll had a margin of error of plus- or minus-4.4 percentage points.