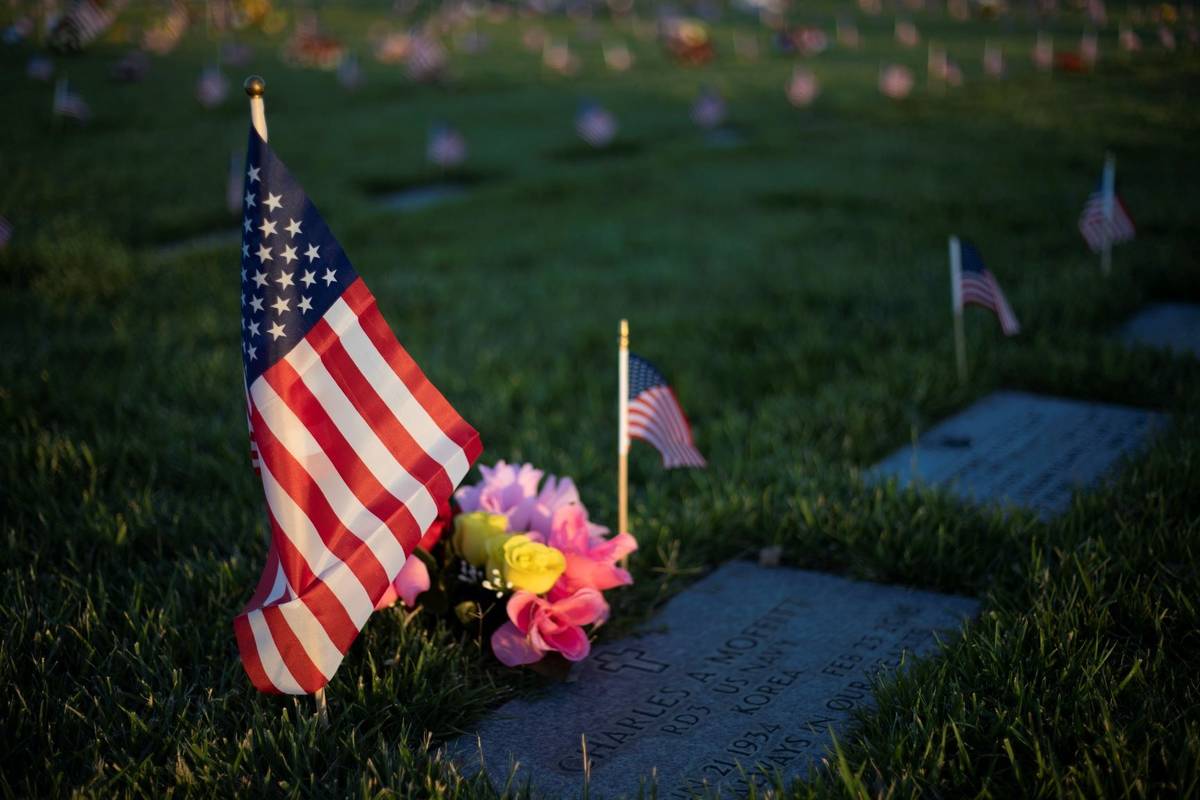 The sun sets on a Korean War veteran's grave on Memorial Day at the Southern Nevada Veterans Memorial Cemetery on Monday, May 25, 2020 in Boulder City. (Ellen Schmidt/Las Vegas Review-Journal)

WASHINGTON — After a decade of waiting, northeastern Nevada men and women who fought for their country can be buried with military honors in Elko after the Department of Veterans Affairs agreed to buy a parcel of land from the city for a National Veterans Cemetery.

The department notified members of Congress on May 27 that the parcel was reviewed and an environmental impact statement gave the green light for the government to purchase the property to build a cemetery to serve 4,000 veterans.

The project has been long anticipated, said Gil Hernandez, commander of Elko’s Veterans of Foreign Wars Post 2350, who among other veterans worked relentlessly to get the cemetery.

“We are very fortunate to get this,” said Hernandez, a Vietnam veteran and a member of the Northern Nevada Veterans Memorial Cemetery Advisory Committee.

The committee has argued that the nearest veterans cemeteries are in Fernley, near Reno; Salt Lake City; and Las Vegas, 484 miles away.

Hernandez, 73, served in the Marines during the Vietnam War. He joked that at his age, he hopes the Elko cemetery will be built soon.

“I don’t want to go to Fernley,” Hernandez said.

Problems along the way

For the past 10 years, Nevada veterans pushed for a cemetery in Elko, but things kept going off track, according to Hernandez.

Sen. Harry Reid was a supporter, but then he didn’t run for reelection in 2016. Sen. Dean Heller backed it, but he wasn’t reelected in 2018. Rep. Mark Amodei is a supporter, along with other state and local officials, but progress on the request was slow.

“The ball was dropped, in my opinion,” Hernandez said.

Last year, supporters of the cemetery including veterans, Elko County commissioners and the city, realized the Department of Veterans Affairs was interested in building a cemetery through its Rural Initiatives program.

Elko was one of eight communities nationwide that met the criteria.

Sen. Catherine Cortez Masto, D-Nev., offered up legislation that would have allowed a land swap with the Bureau of Land Management. She also worked with local officials to allow the government to purchase land from the city, Hernandez said.

That’s the option that was finally chosen. And Cortez Masto reached an agreement with the Trump administration and the city to proceed. After the 2020 election, she continued working on the idea with the Biden administration, according to her spokeswoman.

“Catherine Cortez Masto is the one who really pushed, and kept pushing,” Hernandez said.

Last week, Cortez Masto and other lawmakers were notified by the veterans affairs department of the environmental impact statement and plans to move forward on 15 acres of property.

“Elko has one of the strongest and most active veterans communities in the state, and they’ve advocated for the construction of this much-needed cemetery for over 10 years,” Cortez Masto said in a statement. “I knew I couldn’t let their advocacy continue to be held up by a slow and bureaucratic federal response.”

Hernandez praises the veterans department and Cortez Masto for her efforts. “She pushed when we asked her to,” he said.

The former Marine pushed for the project himself, too. “My foot’s in the door,” Hernandez said. “I’m going to keep pushing.”

Hernandez is not one to give up easily. During combat in Vietnam, Hernandez was pronounced dead three times. He didn’t die, obviously, and returned home to a country divided by the war.

Hernandez became a veterans advocate, and has been one ever since.

The cemetery in Elko will be managed by the federal government. The state maintains the burial grounds in Las Vegas and Fernley.

The new VA burial cemetery in Elko will serve an entire region and a state that 250,000 veterans call home, according to the Department of Veterans Affairs.