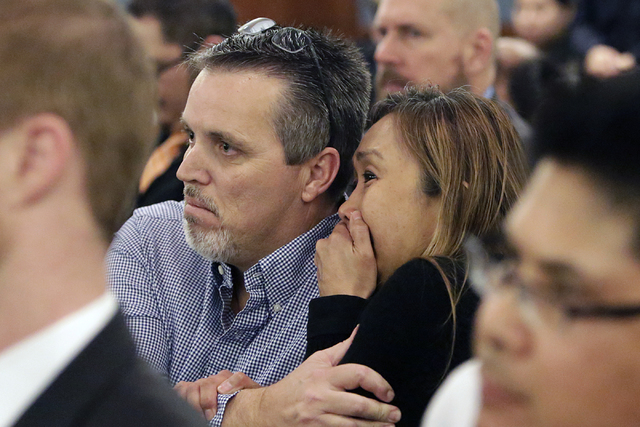 Marcia Fajardo, right, mother of Jaelan Jonson Fajardo who died in a crash caused by a drunk driver, David Fensch, not photographed, comforted by her husband James Tierney as Fensch appears at the Regional Justice Center on Monday, Feb. 13, 2017, in Las Vegas. Fensch is accused of vehicle homicide. (Bizuayehu Tesfaye/Las Vegas Review-Journal) @bizutesfaye 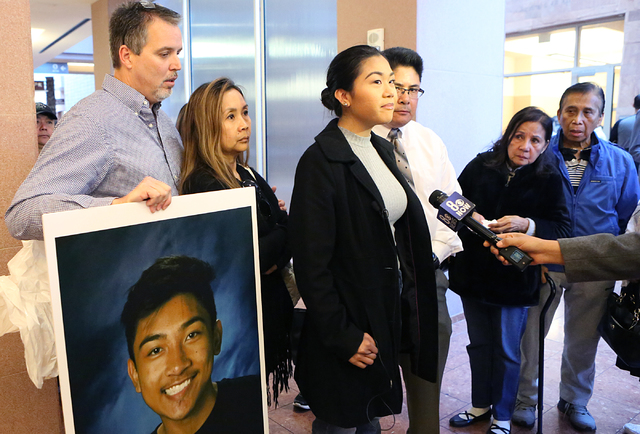 Alani Fajardo, center, sister of Jaelan Fajardo who died in a crash caused by a drunk driver, David Fensch, not photographed, addresses the media as her step father James Tierney, left, and her mother Marcia look on at the Regional Justice Center on Monday, Feb. 13, 2017, in Las Vegas. Fensch is accused of vehicle homicide. (Bizuayehu Tesfaye/Las Vegas Review-Journal) @bizutesfaye 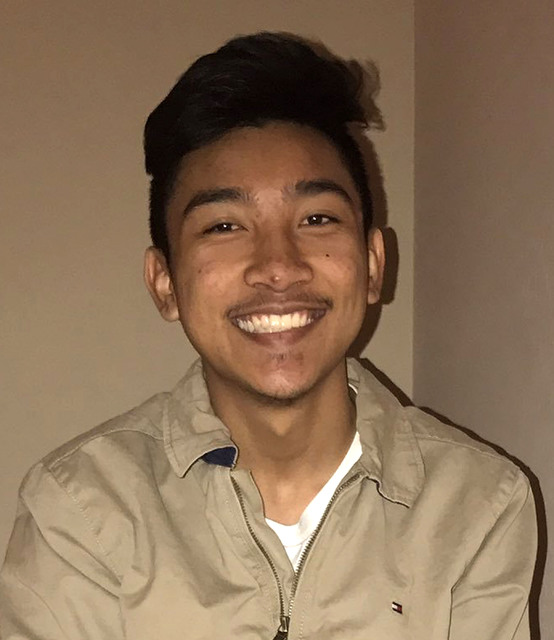 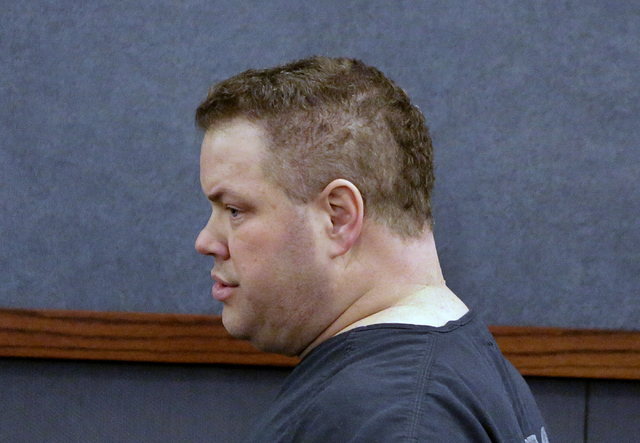 David Fensch appears at the Regional Justice Center on Monday, Feb. 13, 2017, in Las Vegas. Fensch is accused of vehicle homicide in crash that killed 16-year-old Jaelan Jonson Fajardo as he was on his way to school. (Bizuayehu Tesfaye/Las Vegas Review-Journal) @bizutesfaye

The mother of the 16-year-old boy killed when a DUI suspect plowed into his car early February is asking Nevada legislators to sponsor a bill to increase DUI penalties.

“What happened is very tragic and devastating to my family, and I’m trying to find a way where we can turn this tragic event into something positive,” said Marcia Fajardo, the mother of Jaelan Fajardo, on Thursday.

The Shadow Ridge High School sophomore was at a red light Feb. 9 when David Fensch, 47, slammed into the back of Fajardo’s car. Fensch was arrested on one count of vehicular homicide, and records show he has at least four prior DUI convictions.

“This is simply unconscionable; our DUI laws are way too lenient,” Fajardo wrote in an email to several state legislators Thursday morning. “Nevada is an entertainment driven state but that does not mean we need to look the other way on the horrible epidemic that is drunk driving and the horrific impact it has on families in our state.”

Her proposition, which she hoped to call “Jaelan’s law,” asked that first time DUI offenders serve at least one year in jail, second offenders get three years jail, third offenders serve five years jail and cases in which DUIs result in death should be sentenced 25 years to life.

“With Uber, Lyft, taxis, and many other forms of transportation it is unbelievable that we still treat DUI’s like simple misdemeanors,” the mother said.