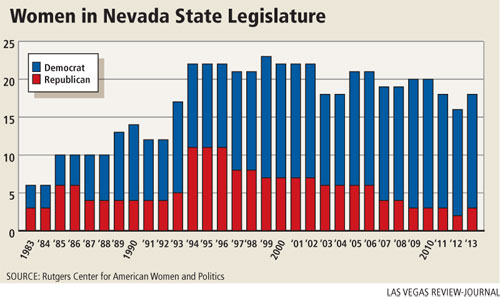 When Sue Lowden scored an upset victory over the male Nevada Senate majority leader two decades ago, she helped Republicans take control of the Legislature’s upper house from Democrats. She also became part of a brief 1990s surge of GOP women winning legislative office in the Silver State.

In her first legislative session in 1993, Lowden was one of just two Republican women in the 21-seat state Senate and one of five GOP women out of 17 women in both houses.

Two years later, the ranks of female Republican lawmakers had more than doubled to 11. Lowden was among three in the Senate and eight in the 42-seat Assembly out of a total of 22 women in the Legislature.

That 1995 session was the pinnacle of GOP female power in the Legislature – the number of Republican women matched the number of Democratic women – in a 63-seat body long dominated by men.

Fast-forward to 2013, when Republican women are hard to find in the Legislature. State Sen. Barbara Cegavkse, R-Las Vegas, is on her own in the Senate, which has three female Democrats. In the Assembly, Melissa Woodbury, R-Henderson, and Michele Fiore, R-Las Vegas, are outnumbered by 12 Democratic women.

Republicans are asking themselves that same question, particularly after an election cycle in which Democrats portrayed the GOP as a party of old, white men waging a war on women.

"I don’t know," said Woodbury, who was the lone Republican assembly­woman in the 2011 session. "I don’t know, but it’s definitely not for the lack of involvement of Republican women in politics. Maybe Republicans aren’t making an extra effort to recruit women. They’re just looking for good candidates."

Eight Republican women ran for legislative office in 2012; but three lost GOP primaries to men, and only two won in the general election. Woodbury was re-elected, while Fiore came in as a freshman. Cegavske, midway through her four-year term, made a failed congressional bid. She can’t be re-elected because of term limits.

Woodbury said some women may hesitate to run because it takes extra effort to serve in a part-time citizen Legislature. She has to take an unpaid, four-month leave from her teaching job for the 120-day session, which opens Feb. 4. Other women have child care to work out, a bipartisan problem, she added.

"I think a lot of women wait until they’re in a situation where they can serve," Woodbury said. "But yes, if we had more women we would have more points of view. Women bring something to the table that others don’t."

Lowden, a former chairwoman of the Nevada Republican Party who lost a 2010 bid for the U.S. Senate, agreed.

"Politics is very time-consuming. It takes you away from your family," said Lowden, who had two sons and two step-children. "There are hard choices when you’re a woman."

Still, Lowden said the GOP could do a better job of recruiting female candidates. She is involved in Maggie’s List – the GOP equivalent of Emily’s List for Democrats – to back female hopefuls, mostly at the federal level.

Nevada Democrats have Emerge Nevada, which helps recruit and train women and has dozens of graduates in state and local office.

"I think we have many talented Republican women who haven’t been given the support to run," said Lowden, who added she is talking with the Nevada Federation of Republican Women about candidate recruitment.

Republican legislative leaders said they are working harder to find more GOP women and minorities to run for office, recognizing the party has been outgunned by the more organized Nevada Democratic Party. Democrats long ago made diversity a priority, in part to attract more voters in a diverse state.

"We have to do a better job of recruiting women and minorities and I’m committed to it," state Senate Minority Leader Mike Roberson, R-Las Vegas, said in an interview. "The party as a whole has some work to do."

Roberson noted that he recruited Mari Nakashima St. Martin to run in state Senate District 9, a key race the GOP was hoping to win in its 2012 bid to take over the Senate. That effort fell one seat short. St. Martin won the GOP primary over a man, but lost the general election to Democrat Justin Jones by 301 votes.

The District 9 seat will be on the ballot again in 2014 because Jones was elected to complete the four-year term of Elizabeth Halseth, R-Las Vegas, who resigned amid a messy divorce.

Roberson said he hopes St. Martin will run again because she is a strong candidate. She also would be the first Asian-American senator in Nevada history, he said. The minority leader also is looking for a woman to run for Cegavske’s open seat in 2014, when the GOP again hopes to take control of the Senate, where Democrats now hold 11 of the 21 seats.

"We need more diversity in the party," Roberson said. "We need more women. We need more minorities. We’re going to make sure we have great candidates in both of those races."

St. Martin, a former spokeswoman for the Nevada GOP and a new mother, said she is "not ruling anything out at this point," but must weigh many factors before deciding to run again.

She said the GOP Senate caucus, which endorsed her, and Republican women’s groups in Southern Nevada provided all the resources she needed in 2012. The clubs helped register voters, get out the vote and raise money, including by forming a political action committee.

"Within the party, some of the best volunteers, donors and organizations are the Republican women’s groups," St. Martin said. "Senator Roberson was an incredible leader this campaign cycle, but there are only so many things he could do. What the Democrats have done here in Nevada is well known. So it’s easy to see why any serious candidate would pause before jumping into a race knowing good candidates have fallen, not because they weren’t good candidates, but because the party structure wasn’t there to support them."

Roberson and his GOP caucus backed male candidates in the other key Senate races, however. They included Steve Kirk, who won the Senate District 5 primary over Annette Teijeiro, a Hispanic doctor, only to lose the general election to Joyce Woodhouse, a Democrat who made a comeback after losing in 2010.

Although Roberson said he is trying to recruit women to run, he was criticized earlier this month by more than a dozen Republican women leaders, including Lowden.

The women, mostly leaders of GOP women’s clubs, signed a Jan. 1 letter to Roberson complaining that he had sidelined Cegavske by denying her a leadership role or a seat on the powerful Senate Finance Committee. Instead, Roberson appointed himself, Sen. Pete Goicoechea, R-Eureka, and Sen. Ben Kieckhefer, R-Reno, to represent the southern, northern and rural parts of the state on the money panel.

Roberson said it had nothing to do with Cegavske’s gender. Most political observers saw the move as a way to ensure Roberson’s control and to put more moderate Republicans on the money committee. Cegavske is one of the Senate’s most conservative Republicans.

"Barbara was definitely dissed, but it was politics," said one Republican woman, who said she is a friend of Cegavske’s and supported sending the letter to Rober­son. "We just couldn’t stay silent."

Cegavske said she was disappointed, but didn’t want to discuss the letter.

"Yes, I am conservative and I will not apologize for that," Cegavske said to applause, adding she would not back down from her beliefs during the 2013 session. "I will fight against taxation on the people."

The Cegavske-Roberson split exemplifies the divisions in the Republican Party in the past decade, with moderates backing proposed tax hikes – including a massive one from the late Republican Gov. Kenny Guinn in 2003 – and conservatives fighting them at every step. Infighting has been a distraction to party building, ceding ground to Democrats.

Assembly Minority Leader Pat Hickey, R-Reno, said he thinks Republican women will make a comeback in the Legislature. He served with a half-dozen GOP women as a new lawmaker in 1997.

"It’s somewhat cyclical," Hickey said. "So, yes, women would be a welcome addition to the Republican body serving as state lawmakers and so would minorities. It would certainly help with the balance."

"She’s taking that seriously and in Michele Fiore fashion is approaching that aggressively," Hickey said.

Fiore said she would intensify the search for strong female and minority candidates and ensure they have the best campaign consultants and strategies.

"The Republican Party first has to do a better job of recruiting and supporting women," said Fiore, adding that women still must earn GOP backing.

"My first choice in recruiting is if the candidate is going to work hard,” she said. "If we strictly focus on women, it’d be like we’re doing the affirmative action thing."