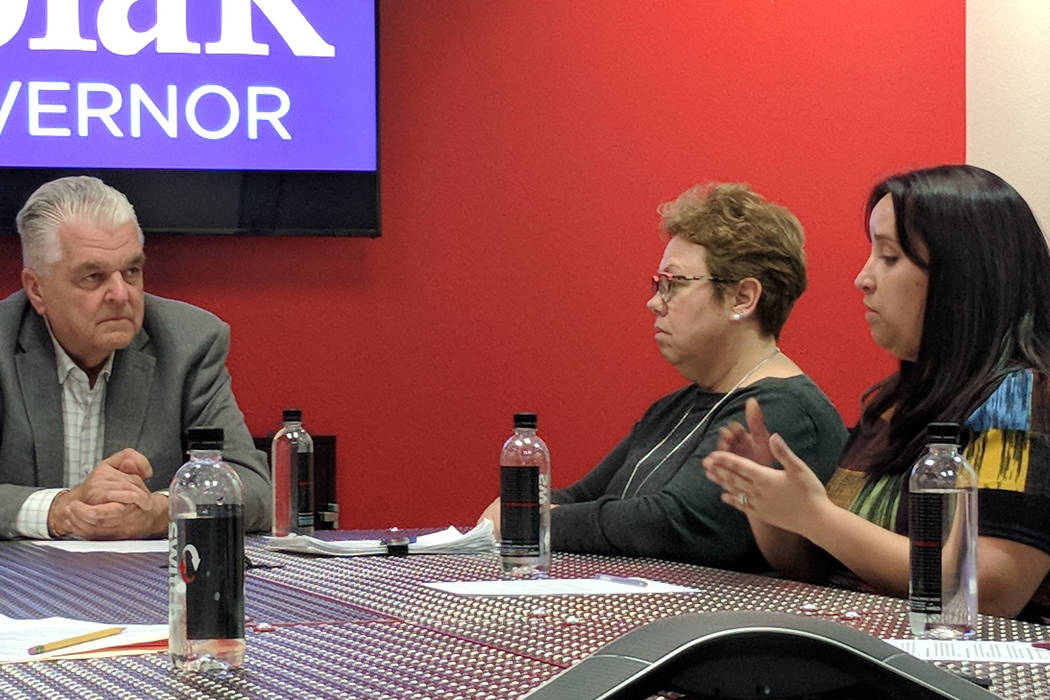 After saying last month that he would donate his salary until education in Nevada was fixed, Democratic governor candidate Steve Sisolak on Monday rolled out his road map to get there.

Sisolak detailed his campaign education platform before a roundtable of teachers and parents of Clark County School District students. He said he came away with a key finding.

“They don’t believe in a cookie-cutter approach,” Sisolak said after the meeting.

Sisolak, a Clark County commissioner, said he wants to modernize Nevada’s public education fund and make sure that certain tax dollars that were promised for education get there. The 2009 room tax increase and 2016 marijuana ballot initiative are his key targets.

That 2009 initiative increased the room tax by 3 percent to generate funding for the State Supplemental School Support Account. But since 2011, the Legislature has transferred that revenue to the state’s public education fund, which in effect reduces the state’s contribution to school districts’ per-pupil amount.

He also took issue with the Legislature’s decision to funnel the revenue from a special 10 percent sales tax on recreational marijuana into the state’s rainy-day fund despite the ballot initiative’s sponsor and supporters promising it as a way support schools.

Sisolak said he wants to reduce the red tape that hinders private businesses or individuals from providing financial help to schools for certain programs or projects, such as by “adopting” a school or naming a gymnasium.

Sisolak also believes that the increased funding can help reduce class sizes in Nevada, which in 2016 had the highest student-to-teacher ratio in the U.S.

Jennifer Manning, a math teacher at Eldorado High, said she started the school year with 47 students in one class but only had 42 desks to go around. Manning said her class hovers around 36 students, and that keeping class sizes in check should be the top priority for the next governor.

Manning and Amy Murray, a Spanish teacher at Spring Valley High, said they were grateful that a candidate was willing to sit down with educators and parents but said they need to continue those talks once they win the elections.

“Once you’re in Carson City, you’re far from the problems in Clark County,” Murray said.