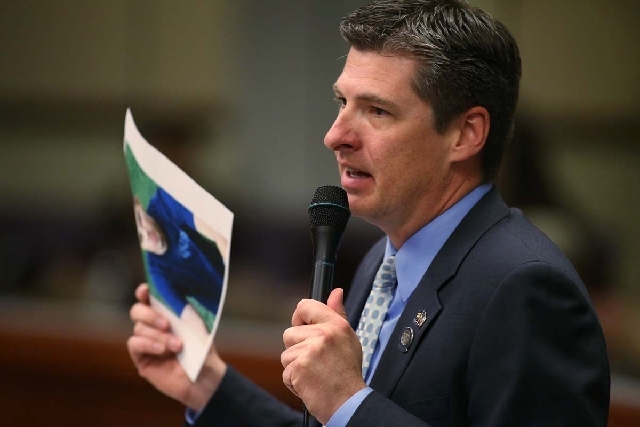 Nevada Assemblyman James Healey, D-Las Vegas, speaks about his former partner who died in an accident in 2010, during an Assembly floor debate on gay marriage at the Legislative Building in Carson City on Thursday. The Assembly voted 27-14 in favor of repealing the language in the Nevada Constitution that defines marriage as between a man and a woman, giving voters a chance to allow same-sex marriage.

CARSON CITY — A constitutional amendment that would let voters decide whether to legalize gay marriage passed the final hurdle of the 2013 legislative session Thursday but still has a long way to go.

Senate Joint Resolution 13 passed the Assembly on a 27-14 vote, bringing the process to get it to the ballot in 2016 to an end for this year. All the no votes were Republicans. Assemblywoman Michele Fiore, R-Las Vegas, voted with Democrats.

The proposed amendment must pass again in identical form in the 2015 legislative session before it can go to the ballot. Gov. Brian Sandoval’s signature is not required.

It also includes a provision to guarantee that religious organizations do not have to perform such unions.

The measure earlier passed the Senate on a 12-9 vote will all Democrats and one Republican in support.

Assemblyman Elliot Anderson, D-Las Vegas, acknowledged during a 25-minute floor debate Thursday that the proposal presented a difficult decision for many of his colleagues. He spoke in support and noted that many in the state gaming industry support the amendment.

Sen. Tick Segerblom, D-Las Vegas, one of the main sponsors of the measure, has said in prior testimony that the measure is both a civil rights and an economic issue in Nevada where marriage is big business.

Assemblyman Cresent Hardy, R-Mesquite, spoke in opposition to the measure.

“I believe that marriage between a man and a woman is ordained of God,” he said. “That the family is central to the creator’s plan for the eternal destiny of his children.”

Fiore spoke in support of the measure.

“When we started this floor session, I introduced my mother to this body, proudly,” she said. “What is currently in our constitution does not allow her to get married. You see, my mom is gay. I love my mom with all my heart, and I am who I am today because of her guidance, influence and how she raised me.”

Assemblyman James Healey, D-Las Vegas, an openly gay lawmaker, said he does not have the same rights as other married couples even with Nevada’s domestic partnership law.

“I’m voting yes today to allow my constituents the opportunity to go to the polls and let their voices be heard,” he said.

Nevada voters in 2002 approved a constitutional amendment defining marriage as being only between a man and a woman.

Richard Ziser, who led the effort to win voter approval of the protection of marriage amendment more than a decade ago, has said in his written testimony to lawmakers that religious liberty would be threatened by the new amendment.

“First Amendment rights, freedom of conscience and religious liberty would be in constant tension with a newly created right to same-sex marriage,” he said.

Supporters of the current language argue that supporters of same-gender marriage should go through the difficult initiative petition process like they did.

A poll conducted by the Retail Association of Nevada earlier this year found that 54 percent of voters want the state constitutional ban on gay marriage repealed, while 43 percent want it to stay in place.

“We thank our friends on both sides of the aisle in the state Assembly and Senate for taking the first step to repeal the discriminatory ban on marriage equality, a stain to the state’s constitution since 2002,” said the organization’s National Field Director Marty Rouse.

“Civil rights, equality and equal protection under the law are not reserved for select citizens, they are granted to every citizen in our country,” he said. “This session’s votes to send marriage equality to the voters remind us that every right established under the laws of Nevada and the United States must be extended to every citizen.”