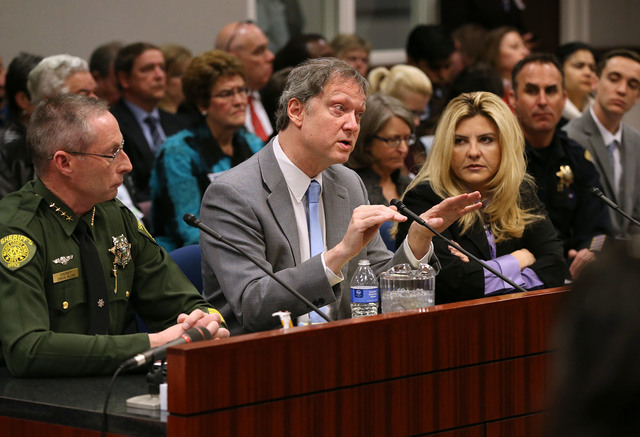 CARSON CITY — A woman who was raped on the University of Nevada, Reno campus in 2007 told her story to legislators for a third time Thursday in support of a bill that would allow concealed weapons permit holders to carry their weapons on college campuses.

Amanda Collins, a concealed weapons permit holder who was unarmed when she was raped by James Biela in a UNR parking garage, testified by Skype in the Assembly Judiciary Committee hearing on Assembly Bill 148.

The bill has provoked a strong reaction both from Second Amendment supporters and from many students and professors at the Nevada System of Higher Education who oppose the bill sponsored by Assemblywoman Michele Fiore, R-Las Vegas. No immediate action was taken on the bill after a lengthy hearing.

Fiore said afterward that the hearing went well, and she expects a favorable committee vote next week.

It is the third attempt to get the so called campus carry bill through the Nevada Legislature. Permit holders in Nevada must be age 21 or older.

“All I wanted was a chance to effectively defend myself,” said Collins, who also testified in support of similar measures in 2011 and 2013. “That choice should not be mandated by the government.”

Biela later committed two other rapes, with one involving a murder. He was arrested in 2008 and later sentenced to death.

Currently, concealed weapons are prohibited on campuses unless an individual obtains permission from the college president. Permission is rarely granted.

Fiore said only two requests were granted systemwide in 2013 and 2014.

She is optimistic that the bill has the votes to pass the Legislature this time around.

Washoe County Sheriff Chuck Allen is supporting the bill, which would also allow concealed weapons to be carried in public buildings, with some exceptions, and in unsecured areas of airports.

Gov. Brian Sandoval said he won’t take a position until and if a bill lands on his desk.

Proponents of the bill included John Lott, an academic and president of an organization called the Crime Prevention Research Center, who offered statistics to debunk some of the arguments against the bill.

Lott said his review of mass shooting incidents shows that perpetrators intentionally seek out gun-free areas to commit their crimes.

But Lott defended his research, and said Media Matters for several years would not let him correct the errors in the many attacks on him in the comment section on their site.

“They won’t even let their readers know there is a response,” he said.

Lott said his organization also has a prestigious academic advisory board.

The published research runs about 70 percent finding a benefit from campus carry laws for reduced crime to 30 percent showing no effect, he said.

According to the National Conference of State Legislatures in information dated from February 2015, 23 states let universities make the call on carrying concealed weapons, 20 ban weapons and seven, including Utah, Colorado and Idaho, allow firearms to be carried with some limitations.

But former Nevada Attorney General Catherine Cortez Masto, who now serves as the executive vice chancellor for the higher education system, said the current procedures for carrying firearms on campus work and she opposed the bill.

“AB148 is overly broad,” Masto said. “This is a solution in search of a problem.”

Guns on campus would have a chilling effect on academic freedom, Masto said.

A half dozen students from the University of Nevada, Las Vegas and UNR testified in opposition to the bill as well. Many more students did not get the chance to testify in opposition due to time limitations.

Not all students are opposed, however. Christopher Lively, state director for Students for Concealed Carry, presented testimony in support of the bill.

AB148 is just one of many Second Amendment bills being heard in the Republican-controlled Legislature this session.