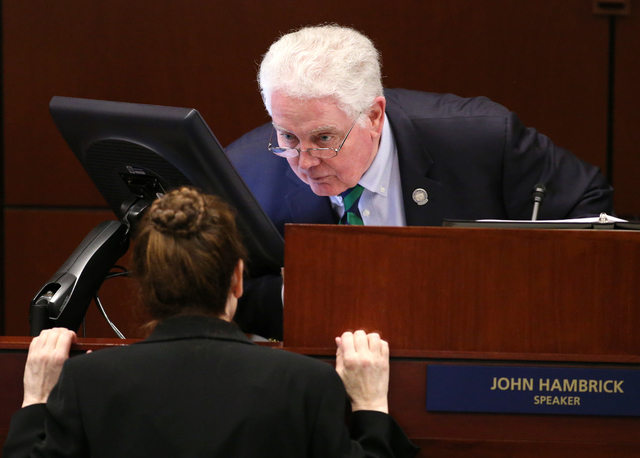 CARSON CITY — A bill requiring parents to be notified if their minor daughter seeks an abortion was revived by a Senate committee Thursday.

Assembly Bill 405 passed the Assembly on a party-line vote. It was referred in the Senate to the Finance Committee, where many bills go to die late in the session.

But in a hasty meeting called on the Senate floor, the committee voted to re-refer the bill to the Senate Committee on Health and Human Services.

Finance Chairman Ben Kieckhefer, R-Reno, said the committee talked about the bill and decided that because it did not have a fiscal impact, it was best left to the policy committee on health issues.

State Sen. Joe Hardy, R-Boulder City, a physician and chairman of the Health and Human Services Committee, said the bill probably will be considered next week — the last week of the 2015 session.

Lawmakers face a deadline to adjourn by midnight June 1.

Abortion rights and anti-abortion activists have squared off over the measure, which would revive a law that requires girls younger than 18 to tell at least one parent before getting an abortion.

Supporters argue it would put ending a pregnancy on par with getting a tattoo or having an ear pierced. Anti-abortion activists have been seen in the Legislative Building’s hallways urging the Senate to hold a hearing on the bill when it appeared dead.

The bill was originally introduced by Speaker John Hambrick, R-Las Vegas. He later announced the bill would not be heard and would instead be the subject of a lawmaker study over the interim before the 2017 session.

But the Assembly Republican Caucus decided to hear the measure, which occurred April 10. It came out of the Judiciary Committee on a party-line vote. It passed the full Assembly 24-17.

In earlier testimony, the bill’s backers said parental notification can help ensure children who receive an abortion receive support after the surgical procedure.

Opponents pointed to the chilling effect of any law limiting access, and said the bill would put up barriers and be a government intrusion into the right of a woman seeking an abortion.