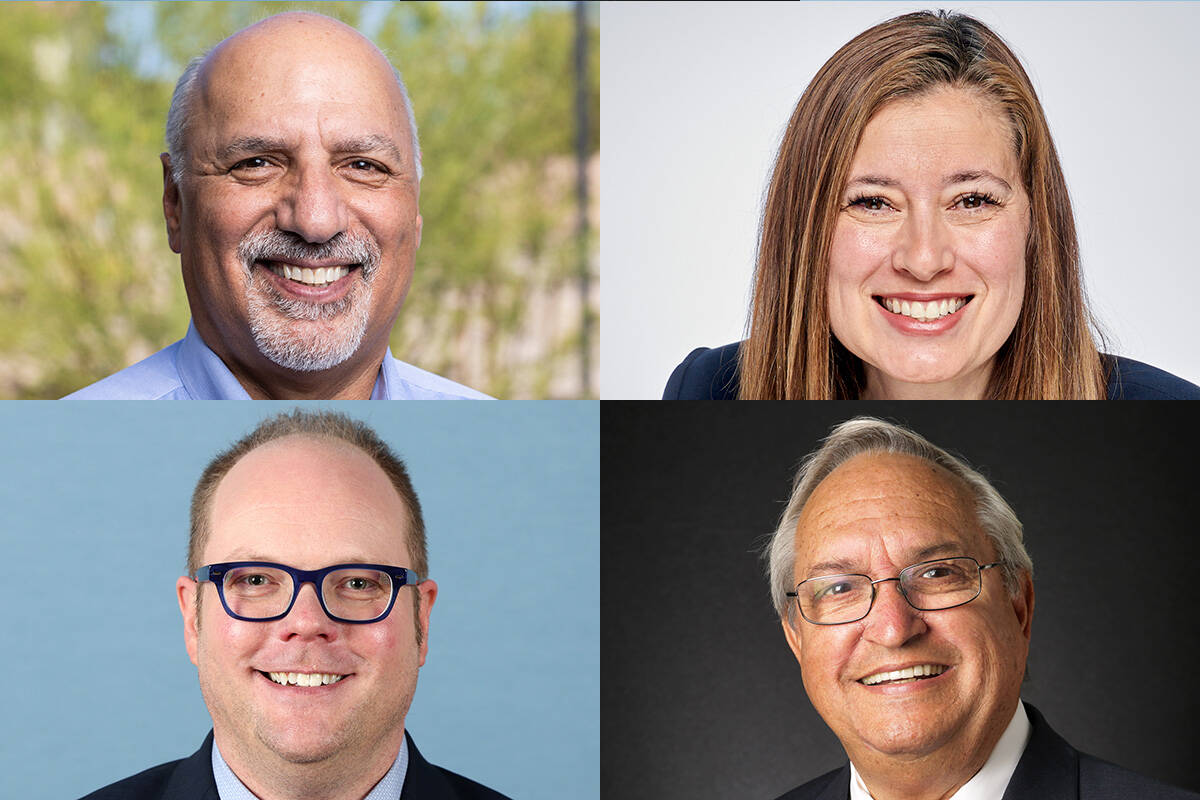 Five candidates are on the ballot for lieutenant governor, including an appointed incumbent and a Las Vegas city councilman.

Non-partisan healthcare lobbyist Trey Delap, Independent American Bill Hoge and Libertarian professional fighter Trujillo Tachiquin round out the ballot. Hoge and Tachiquin could not be reached for this story.

Despite being ‘a heartbeat away’ from the governor’s mansion, the lieutenant governor arguably has less to do than any other statewide office, so much so that the job is considered to be part time. The lieutenant governor chairs the state’s tourism board, is vice chair on the Department of Transportation’s board and is the president of the state Senate.

Burkhead was appointed to her position by Gov. Steve Sisolak in December of 2021, after former Lt. Gov. Kate Marshall left the state for a job in President Joe Biden’s administration. A Las Vegas native, Burkhead was a teacher and principal in the Clark County School District before being appointed to the office. She was principal of Fertitta Middle School and later Foothill High School.

Before becoming lieutenant governor, Burkhead had little prior political experience. She ran for state Assembly in 2002 and lost, and has served on the Paradise Town Advisory Board.

Since she took office last year, one of her biggest accomplishments has been building the Office of Small Business Advocacy that aims to remove barriers for small businesses by connecting them with different resources and networking opportunities, Cano Burkhead said. It has also connected businesses with grant opportunities and helped them optimize their businesses in Google search results. The office was Sisolak’s idea, and was created by the Legislature in 2021.

She also started the Battle Born Education Hero awards to recognize the efforts of educators in Nevada, and she has continued to substitute teach while also serving as lieutenant governor to help address the teacher shortage.

“Education will always be a priority for me,” Cano Burkhead said. “I have a lot of ideas, and that’s why I’m really excited to have a full-term and to be able to continue to do this work.”

Burkhead’s advocacy for education comes at a time when many Nevada schools have had difficulty serving their communities post pandemic. The Clark County School District has been plagued by problems, and is ranked as one of the worst major metropolitan school districts in the country.

Cano Burkhead wants to retain the teachers the state has by compensating them fairly and making sure they have access to all the tools they need, including mental health resources.

“We had to pivot so much during the pandemic,” Cano Burkhead said. “Somewhere along the lines we forgot that our educators also experienced loss. They also were contending with navigating through a pandemic with their own families while making sure they showed up everyday.”

She said she also wants to improve recruiting at the state level by rebranding “what it means to be an educator in the state of Nevada,” she said.

If elected, Cano Burkhead wants to work on outdoor recreation and finding ways to help everyone access Nevada’s public land. Around tourism, she wants to promote the entire state, not just Las Vegas’ resorts and entertainment opportunities, but the “gems in our state.”

Anthony has served on Las Vegas City Council since 2009, following a 29-year career in the Metropolitan Police Department. He has also served on the Nevada System of Higher Education board of regents, including as its chairman. That experience is what makes him the best pick for lieutenant governor, he said.

He doesn’t have many specific policy ideas he plans to introduce, he said, but he would immediately use his role to meet with knowledgeable people in each sector of his work — tourism and economic development — and use their advice to streamline government processes.

Looking back at his 13 years on city council, Anthony said his proudest accomplishment was getting a new fire station built in Sun City Summerlin. Emergency response times were lacking in the neighborhood, he said, and he listened to feedback from his constituents to get the station built.

“In my first term on the Las Vegas City Council I built fire station 107 which drastically reduced response times for paramedics and I guarantee has probably saved lives. I’m very proud of that,” he said.

Anthony has tried unsuccessfully for higher office. He ran for mayor in 2015 against incumbent Carolyn Goodman but lost in the primary. He filed to run for Congress in the 4th District in 2018, but dropped out, citing health issues. And he lost a race for Clark County Commission in 2020 by a razor-thin margin; Democrat Ross Goodman was declared the winner by just 10 votes.

Delap wants to use his candidacy to show Nevadans that there’s an alternative to the “broken” two-party system. He got his start working for Democratic Rep. Shelley Berkley’s first campaign in 1998, and fell in love with working in politics.

But his career was derailed as he developed a gambling addiction and served time in prison for felony theft. He’s not afraid of speaking about his past because he’s an example that people can grow and change, he said.

Since his recovery, he has worked as a lobbyist in Carson City representing mostly mental health and health care advocacy non-profits. His experience during recovery also inspired him to leave the Democratic Party and become non-partisan.

“The help I got was from these Republican friends who had small businesses, who were conservative and they didn’t care (about my past),” Delap said. “All these Democrat contacts, nothing. I was a pariah… That kind of soured me on the Democratic Party.”

A plurality of Nevada voters aren’t affiliated with either of the major parties, and Delap thinks he can carve out enough votes in the middle to send a message to the parties that both are becoming too extreme, he said.

“We’re just in a place where the true, true independents and the moderates will decide (elections) because it’s just so divided. And I think that’s exciting,” he said. “I was effective in the legislature as a lobbyist without party lines because I was going on issues.”