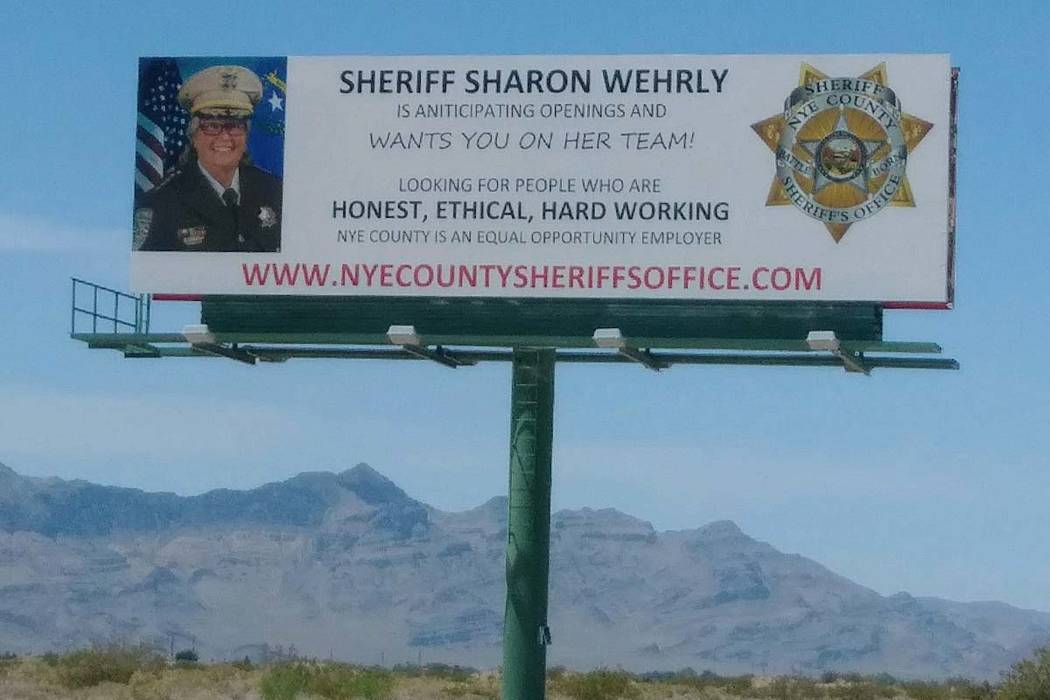 Nye County Sheriff Sharon Wehrly, who’s running for re-election against nine other contenders, is under fire for recruitment billboards that her critics say are political campaign ads in disguise.

“In my opinion, a legitimate sign says the department is recruiting citizens and leaves the name of the sheriff off of it,” said Tony DeMeo, a Pahrump resident who served as the county sheriff for 12 years before retiring in 2015. “This gives the appearance that county money is paying for a political advertisement.”

Wehrly said the former county manager, Pam Webster, approved the billboards and that an outside law firm told her they do not violate campaign laws. The primary is June 12.

The four billboards in question — which have popped up in Pahrump and Tonopah — feature a large photo of Wehrly in uniform with the words “Sheriff Sharon Wehrly” in a giant font. In small print underneath her name, it says, “is anticipating openings and wants you on her team!”

“We had a design firm do it, and that’s the way they wrote it,” Wehrly said. “It was patterned after billboards in San Bernardino and Los Angeles counties.”

The sign says the sheriff is looking for people who are “honest, ethical, hard working” — with the three descriptions in a large font. Critics say most drivers will only see the sheriff’s name, photo and the positive descriptions.

“You’re not going to see the fine print driving 40 miles an hour,” said DeMeo, who has come out of retirement to run for his old seat. “All you see is a photo of the sheriff with that motto.”

DeMeo said he’s also concerned that if Wehrly loses her re-election bid, the next sheriff can’t reuse the recruitment signs. Wehrly said it’s normal for a sheriff to use his or her name on materials, and she couldn’t reuse items after DeMeo retired and she took over.

“Everything he had during his term had his face and name on it,” Wehrly said. “I have all kinds of stuff I can’t use because it had his name on it.”

Some political experts say there’s nothing wrong with Wehrly’s signs — that even if they give her an advantage, it’s just part of the political game.

“It just comes with the territory when you are the office holder. This is the way the game’s played,” said Eric Herzik, chairman of the University of Nevada, Reno political science department. “It’s a recruitment ad, and that’s the advantage that any incumbent has.”

Some Nye County residents have filed a complaint about the signs to District Attorney’s Office, but DA Angela Bello said her office is not investigating.