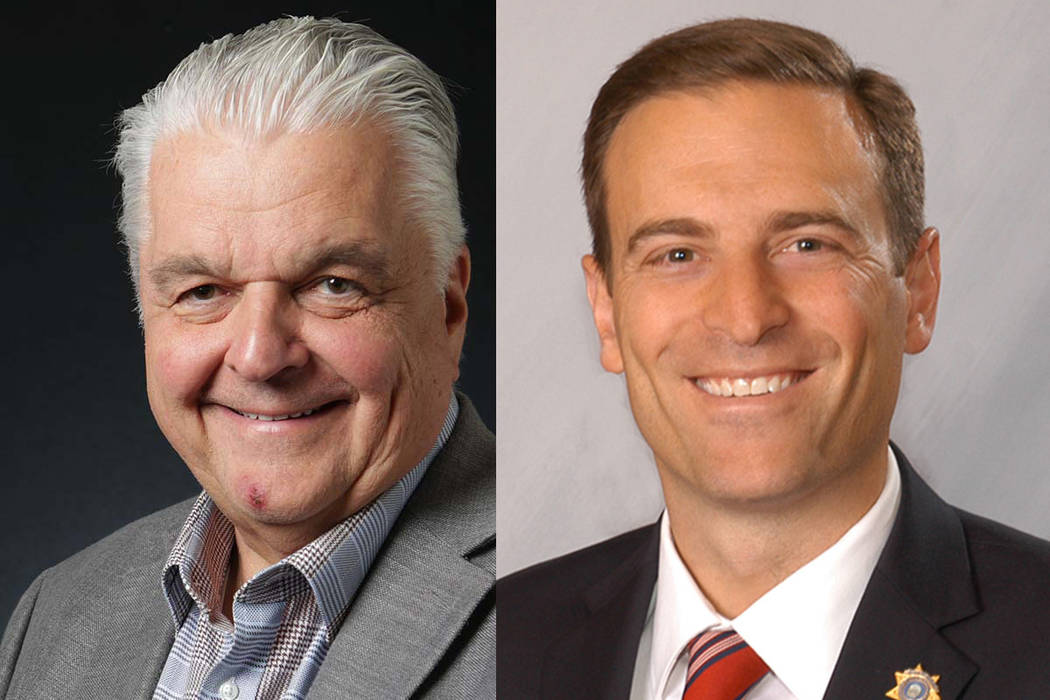 CARSON CITY — The race to become Nevada’s next governor comes down to a political matchup of ideological opposites in Democrat Steve Sisolak and Republican Adam Laxalt.

Sisolak is a businessman and Democratic chairman of the powerful Clark County Commission, a body that some believe wields more influence than even the state Legislature. He is looking to become the state’s first Democratic governor in two decades.

Laxalt is the first-term Republican Attorney General and a former Navy officer looking to follow in the footsteps of his grandfather, former Nevada governor Paul Laxalt.

Both the Cook Political Report and Sabato’s Crystal Ball, a product of the University of Virginia’s Center for Politics, both list Nevada’s gubernatorial contest as a “toss-up” in ratings that came out after Tuesday’s primary.

“I think it will be a tight race,” said Sig Rogich, a longtime Republican strategist and former aide to President George H.W. Bush who got his start in politics working for the elder Laxalt’s campaigns in the 1960s.

The candidates took two very different pathways to get on the general election ballot.

Laxalt has been the presumptive nominee for the Republican party since early 2017 after notable Republicans — including U.S. Dean Heller, Rep. Mark Amodei and Lt. Gov. Mark Hutchison — announced they wouldn’t run to replace term-limited Gov. Brian Sandoval. Laxalt had no trouble formally earning the party nomination, beating his nearest competitor by more than 60 points and nearly 90,000 votes.

Sisolak is coming in financially exhausted, having spent more than $6.5 million during the primary cycle to fend off fellow commissioner Chirs Giunchigliani.

Sisolak’s unprecendented primary spending, the millions of dollars from outside groups like Emily’s List and the National Education Association to support Giunchigliani and the sheer negativity that took hold of the race suggested a tight contest, but that wasn’t ‘the case. Sisolak took the nomination by 11 points, thanks in large part to a decisive margin in Clark County.

But while the primary was both bitter and draining, it shouldn’t hurt Sisolak come November, UNLV political science professor David Damore said.

“I don’t think he did himself irreparable damage,” Damore said.

If both candidates successfully rally their respective bases, the general election will come down to two things: voter turnout, and which candidate can better appeal to the growing number of registered nonpartisan voters in the purple Silver State.

Damore thinks Sisolak will perform well in Clark County, but the question is whether he will be able to generate the same kind of Democratic enthusiasm in Nevada’s only other urban hub, Washoe County — where Sisolak lost to Giunchigliani by nearly 13 points.

Herzik said Sisolak should be able to do well in Washoe, and has the edge when it comes to the independent voters.

“I think Sisolak has a better inroads with nonpartisans,” Herzik said. “Nonpartisans are growing, and part of that growth are people who have left the Republican party. And that’s especially true in Washoe County.”

Laxalt, Herzik added, “would be the most conservative governor this state has ever seen. He’s more conservative than (former Republican Governor) Jim Gibbons.”

Rogich, meanwhile, called Sisolak a “strong candidate” and praised his work as the county commission chairman. But Rogich said he think the Democratic party agenda, which includes calls for stricter gun control and support of Planned Parenthood, is too progressive for many moderates and nonpartisans.

“I think it’s Adam Laxalt’s race to lose,” Rogich said. “To be governor, you have to appeal to the broader sense of what the state is all about. The left is far, far more liberal than Adam Laxalt is conservative. So I think that balances out nicely for Laxalt.”

Those ideological differences will be on full display over the next five months, with the candidates’ contrasting viewpoints — especially those on health care, immigration, gun control and education — being the focal points of the election.

And there’s the always-present element of President Donald Trump — which has factored into almost every competitive special and regular election since the president took office in January 2017.

Hinting at just how much Trump may factor into the race, his name came up in the Tuesday night election victory speeches for both candidates.

“We need a governor who gets up every day thinking about you and your family and how to make your life better. A governor who has stood up to bullies and will stand up to anyone who tries to hurt Nevada — including President Trump,” Sisolak said in his victory speech.

But Laxalt won’t run away from attacks tying him to Trump, who endorsed the attorney general in a tweet last week.

“They’re going to say I’m a puppet for the president. They’re already saying that. But Donald Trump did not fail Clark County for decades,” Laxalt said Tuesday in his speech.